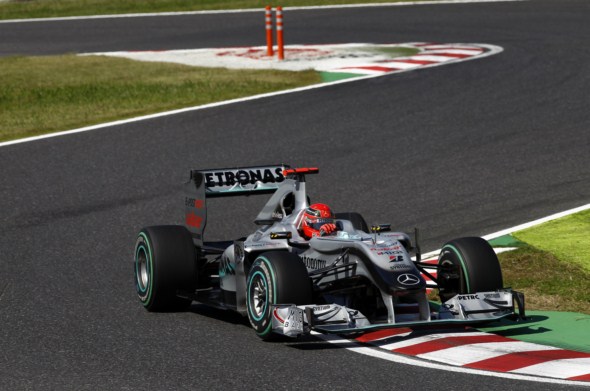 Michael Schumacher finished the Japanese Grand Prix in the points today after a good start from 10th position on the grid and a strong race, including an exciting battle with his team-mate, saw him finish in sixth place.

The team was on course for a double points-finish before an accident for Nico Rosberg brought his race to a premature end on lap 48 when he was in sixth position, just ahead of Michael who was then in seventh place.

“It was a disappointing end to the weekend today. Due to a clutch problem, my start was poor but our strategy was good to change tyres under the safety car on the first lap which enabled me to recover the places and be racing in sixth position. My tyres were suffering from having done such a long stint so it was tough to maintain a good pace but it was enough to keep Michael behind. Then something broke on the rear of the car and put me into the tyre barrier which ended my race early.”

“I am quite happy with the race today and the car felt really good. The opportunity to make up places was just what I hoped for and sixth place was the maximum that we could have achieved. It was good racing and it must have been very entertaining for the crowd. It was fun to be racing Nico so it is a shame what happened to him. We are now heading to South Korea and although I don’t really know what to expect, if our car is as good as it was here, then I hope for another encouraging race.” 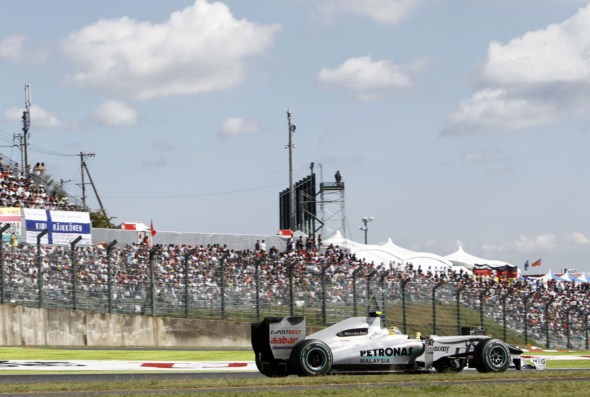 “We had a strong race today with both cars and it is very disappointing and frustrating that Nico was unable to finish the race. Our prime concern was for his safety and thankfully he is absolutely fine. Prior to the incident, he was in an excellent position having taken advantage of an early stop under the safety car to make up places lost at the start. Michael also had a very good race today with a great start setting him up to make up positions. It was an entertaining few laps when Nico and Michael were fighting for sixth place and we were happy for them to battle it out. We are looking into the cause of Nico’s accident now and as always there will be a thorough investigation into what happened.”

“Michael finished in sixth place today and was the first car behind the five drivers fighting for the World Championship. He drove a strong race after he was handicapped with a small technical issue during qualifying. We still need to investigate what happened to Nico’s car six laps before the end when he was in sixth position. It is a real shame that he could not finish and sorry to him for that. Nico drove a faultless race and it was a good strategy to bring him in under the safety car on lap one. Michael proved this weekend that he is strong when we give him the base to do so.”