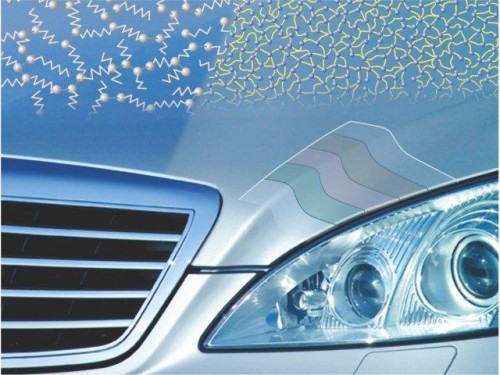 After four years of development work, an innovative new clear lacquer is set to go into series production at Mercedes-Benz at the end of 2003. Ground-breaking nano-technology ensures that the new product is substantially more scratch-resistant than conventional paint.

The E, S, CL, SL and SLK-Class model series are the first cars in the world to be available with this new paint system, whilst customers of other Mercedes models can look forward to the increased scratch resistance of nano-paintwork from spring 2004. 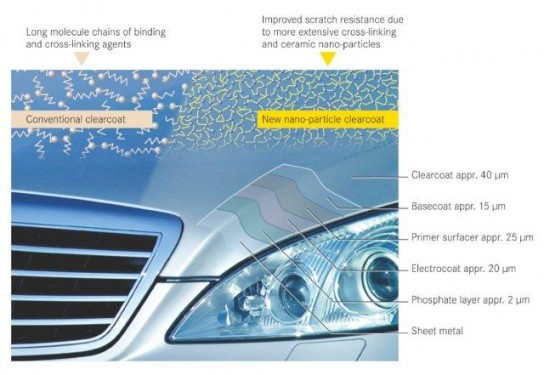 The nano-particles provide a three-fold improvement in the scratch resistance of the paintwork and ensure visibly enhanced gloss over an extended period of time. Following extreme tests in a laboratory car-wash, Mercedes engineers noted an around 40-percent improvement in paint gloss compared to conventional clear lacquers.

Mercedes-Benz carried out extensive testing on the nano-particle clearcoat both in the laboratory and under everyday conditions. Even after several years of use, the more than 150 test cars involved in the long-term testing programme displayed significantly greater scratch resistance and enhanced paint gloss compared to vehicles with conventional paintwork.

Added to which, the newly developed paint system also meets the stringent Mercedes standards in terms of the protection it offers from chemicals in the environment.

New nano-particle clearcoat will be introduced as standard for both metallic and non-metallic paint finishes.

Remarkable advances in the area of nano-technology have allowed tiny ceramic particles – each less than a millionth of a millimetre in size – to be integrated into the molecular structure of the binding agent. These particles float around freely at first in the liquid clearcoat, before cross-linking as the drying process takes effect.

The particles link in with one another in such a way as to create an extremely dense and smoothly structured network at the paint surface. This provides a protective layer and ensures that the new nano-particle clearcoat is considerably more scratch-resistant than conventional paintwork.

The effectiveness of the new technology was borne out by the results of an extreme test conducted in a laboratory car-wash according to DIN standards.

The water used in the test contains a precisely measured concentration of fine particles and is spread over the paintwork by the rotating washing brushes, leaving behind scratches. After ten wash cycles in the laboratory car-wash – reproducing the degenerative effect of some 50 to 100 regular car washes – the nano-painted sheet metal emerged with around 40-percent greater gloss than samples with conventional clear lacquer. 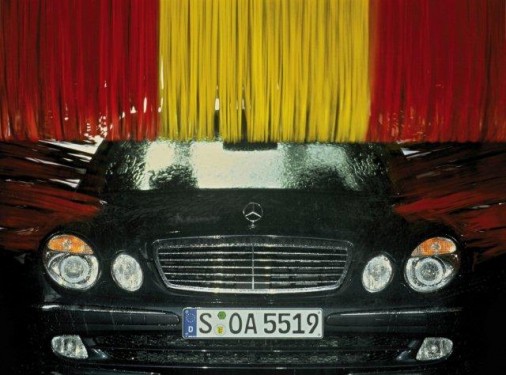 Mercedes-Benz is the world’s first vehicle manufacturer to offer this more scratch-resistant clear lacquer. Nano-particle clearcoat serves as an early indicator of the huge potential of nano-technology for the future, techniques which allow scientists to reach into and alter the atomic structure of materials. Indeed, it will also be possible to give materials in other areas of automotive development new properties which allow them to carry out particular functions.

The term “nano-technology” is rooted in the Greek word “nanos”, which translates as “dwarf”. Scientists generally use the term to describe a billionth of a unit, one nanometre equating to a billionth of a metre.