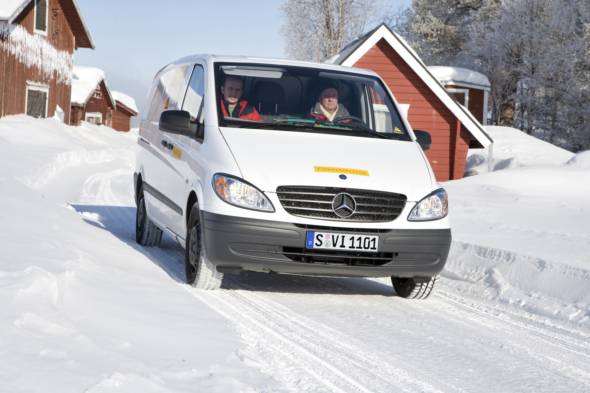 Arjeplog/Sweden – Freezing cold temperatures of up to minus 30 degrees during both the day and night, and intensive handling tests on sheet ice,  compacted snow and public roads too: these were the conditions faced recently by the prototype of the Mercedes-Benz Vito with battery-electric drive when it successfully undertook and passed a series of the harshest winter tests near the polar circle.

All functions tested in extreme cold, snow and ice

Despite being limited to a top speed of 80 km/h, the Vito with electric drive must nevertheless also pass all of the tests which a combustion-engined Vito has to endure. Whether tricky handling courses, extreme gradients, cornering circuits under critical conditions or braking measurements – these are just some of the tests which the safety systems, drive, suspension and all of the other components of a Mercedes-Benz van must endure, even in extreme cold, snow and ice, without encountering any problems. In addition, the properties of the electric drive system, for example braking via the electric motor for energy recuperation, must also be integrated into the handling systems.

Van developers traditionally test new vehicles and components each winter in the far north, in Arjeplog/Sweden, just an hour’s drive from the polar circle.

Further endurance tests to follow prior to start of series production

Having now already become acquainted with the extreme winter in Lapland, the whisper-quiet, zero-emission van is also due to face other endurance tests in the Alps, in the heat of Spain and also on other continuous operation routes.

When it comes to safety equipment, the Vito with electric drive will not be cutting any corners. All models will come with ESP as standard which combines the functions of both ABS and ASR. The number and type of airbags will also be the same as currently available on the Vito range. The vehicles are also subjected to crash tests in order to guarantee the highest possible level of passive safety.

Range of around 130 km, no loss in transport capacity

The Vito with battery-electric drive is the world’s first van available with an electric-drive system ex factory. The drive is designed is designed solely to run on battery power and thus dispenses with the powertrain intended for combustion engines. A battery featuring powerful lithium-ion technology supplies energy to the Vito. With an operating voltage of 400 V, 16 A current and an available capacity of 32 kWh, the Vito’s range averages 130 km but can be considerably higher given an appropriate driving style. The electric motor delivers a peak output of 90 kW. With an electronically limited top speed of 80 km/h, performance is designed to meet transportation needs in and around urban areas. There is also no loss in terms of payload or load volume compared to a conventionally powered Vito.