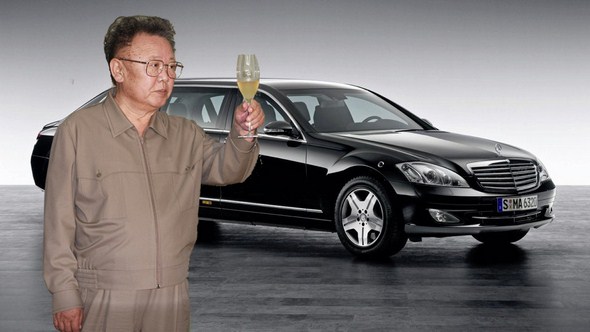 As the Dear Leader of an impoverished country, where most citizens are too poor even to afford a bicycle, Kim Jong-Il enjoyed the fruits of his dictatorship to the fullestuntil his death. Many of those fruits were Mercedes-Benz cars.

North Korea’s late big boss and looking-at-things enthusiast, whose birth was said to have been foretold by a swallow (c’mon, the bird) and announced by a double rainbow, died this past weekend from a heart attack at the age of (approximately) 69.

During his nearly 18-year reign, Kim’s fondness for Mercedes-Benz cars was reported widely. It’s always been a bit dissonent that he was able to flaunt the country’s treasure in such a fashion, considering UN sanctions have long banned the sale of luxury goods to the country. Of course, with North Korean citizens banned from using cellphones and the internet (as well as accessing non-state information of any kind) hardly anyone in his country would know it, even if the secret was out in the West.