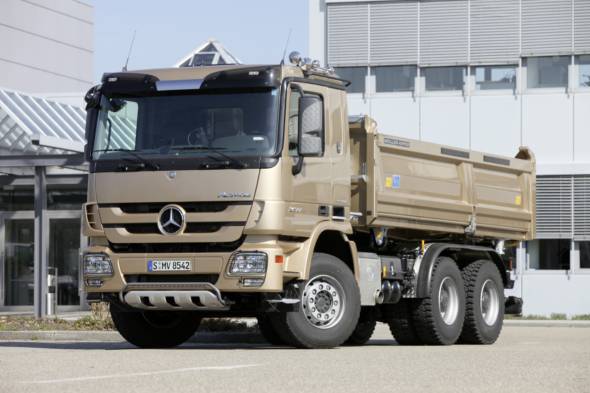 Munich / Stuttgart – ″Trucks you can trust″ is the slogan for the more than 1000 square metre large Mercedes-Benz stand in Hall B4 at the 2010 Bauma fair in Munich (from 19 to 25 April 2010). This slogan refers both to the familiarly reliable, economical and durable technology of Mercedes-Benz, and to the comprehensive care of customers in all aspects related to trucks.

One new feature for the Actros is the patented road construction package for the air suspension tipper, which affords special protection to the air bellows and plastic components at the rear end. The road construction package consists of raised tail lights fitted with retaining lugs and protective grilles, reversing lights relocated further inside and shortened wings with folding mud flaps and a folding underride guard. As soon as it has been folded down, the rear underride guard acts as a protective barrier for the air bellows. The road-laying machine can also dock right against the rod, pushing the tipper along even though the underride guard is hard up against the tyres: special rollers on both ends of the rod establish a low-friction contact between the underride guard and the tyres.

In the Axor series, the world’s largest construction fair is hosting the world premiere of a new, weight-optimised four-axle concrete mixer chassis with single tyres on the third axle, with a weight approx. 700 kilograms below that of a corresponding four-axle Actros chassis. This makes it possible to transport eight cubic metres of concrete for a gross vehicle weight of 32 tonnes. 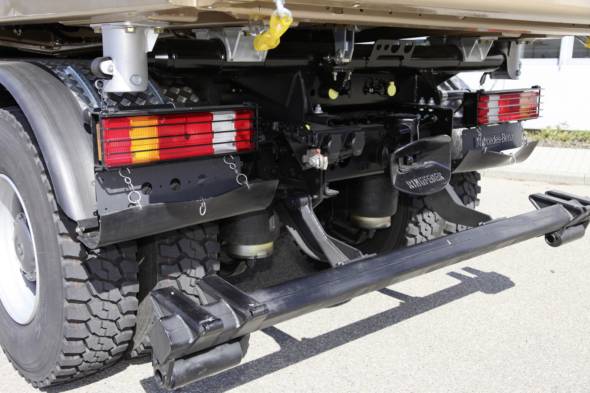 Mercedes-Benz already delivered the first Zetros to a Finnish company in the energy sector in December 2009. The new Zetros semi-forward control truck – practically a continuation of the Unimog for higher gross vehicle weights – is highly interesting wherever a compact profile, high payload and an outstanding all-terrain capability are required. Typical application areas for this single-tyred all-wheel drive truck with 4 x 4 and 6 x 6 drive configurations include the forestry and energy sectors, firefighting and disaster relief, and operations in remote areas as well as e.g. expeditions. There is also strong interest in this special truck from a number of companies in the construction, open-cast and deep mining sectors that require tailor-made solutions. Mercedes-Benz supplies the Zetros with permanent all-wheel drive and a two-stage transfer case with an off-road reduction ratio of 1.69, as well as differential locks on all axles. The payload of the two-axle version ranges from four to six tonnes, with a gross vehicle weight of either 16 or 18 tonnes, denoted by the model designation 1833.

A total of six vehicles on the Mercedes-Benz stand

The Mercedes-Benz stand at the Bauma fair will display tailor-made solutions for road construction, earth-moving and concrete delivery, as well as construction waste disposal, landscaping and heavy-duty transport. The new Zetros series of off-road trucks demonstrates the wealth of civilian applications that are opened up by these new semi-forward control vehicles.

The third generation of the Construction Actros is represented by three vehicles with special features: a new, Mercedes-Benz patented road construction package, and also the Mercedes PowerShift Offroad automated transmission, which lowers fuel consumption and generally reduces wear and tear on the powertrain – especially the clutch. All the Actros construction trucks benefit from the further increase in robustness and the extensive comfort features introduced as part of the recent facelift.

Mercedes-Benz is also exhibiting the new Actros SLT 4165 S heavy-duty tractor unit, which develops an output of 480 kW (653 hp) for gross combination weights of up to 250 tonnes.

The versatility of the Atego truck series is demonstrated by a two-axle, all-wheel drive Atego crane tipper with a Meiller tipper body, Palfinger crane and a mounting plate for a snowplough: the ideal, versatile vehicle for municipalities or tradesmen – and particularly economical to boot with its start/stop system.

The range of vehicles on display is rounded off by two model G 300 CDI
G -Class Professional vehicles shown in the open area directly behind the hall. With their extremely robust ladder-type frame and rigid axles, permanent all-wheel drive, automatic transmission with reduction gear and three 100% differential locks as standard, these vehicles are equal to any challenge on difficult terrain. As a track record spanning 30 years amply demonstrates.