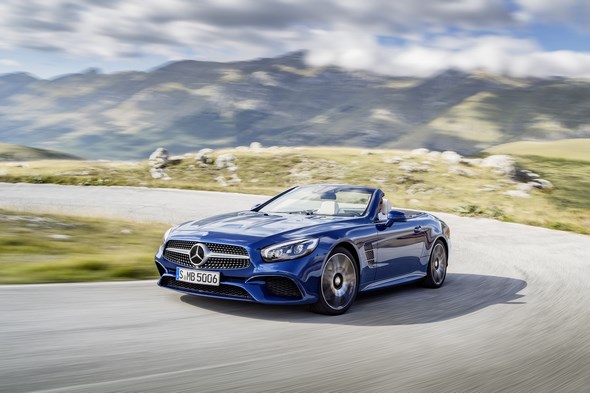 Open for sporty and exclusive refinement

Elegant cabriolets and sporty roadsters are among the highlights of Mercedes-Benz’s model history. At the Salon Rétromobile in Paris, Mercedes-Benz Classic is shining the spotlight on this tradition combining design, sportiness and comfort.

Mercedes-Benz Classic is exhibiting on Stand K 064 in Pavillon 1.

Stuttgart. Mercedes-Benz has been making the dream of sporty motoring in luxurious open-top cars come true for generations.

Mercedes-Benz Classic is showcasing this unique historic dimension at the Salon Rétromobile with a journey through time, focussing on the culture of the Stuttgart brand’s cabriolet and roadster models.

A total of six cars can be seen on the stand, which encapsulates the feel of open-top driving with its filigree and airy architecture.

From the 1950s come the 300 S (W 188) and the 300 SL Roadster (W 198). When it premiered at the Paris Motor Show in October 1951, the highly exclusive 300 S was the most expensive vehicle from any German car brand, even outstripping the prestigious Mercedes-Benz 300 Saloon from which it was derived when it came to exclusivity and price.

This model is in turn derived from the racing car of the same name (W 194), with which Mercedes-Benz achieved numerous international successes in 1952.

Together with the 190 SL (W 121) launched in 1955, the 300 SL Roadster established the tradition of open-top Mercedes-Benz production sports cars boasting the magical “SL” tag.

Grand opening for the classic-car season

French classic-car enthusiasts established the Salon Rétromobile 40 years ago. Since its premiere in 1976, the show has become one of the most important events on the international classic-car calendar and also the season’s curtain-raiser.

Given the huge popularity of the show in recent years, the 2016 event is being held in Halls 1 and 2.2 of the Exhibition Centre at Porte de Versailles, Paris.

The organisers are expecting around 450 exhibitors and more than 100 clubs with over 500 vehicles on display.

Focal points of the event include the new vehicles from the year in which the Rétromobile was established – 1976 – among them the Mercedes-Benz W 123, which marks a milestone in the E-Class tradition.

Further highlights include an exhibition of record-breaking cars from the collection at the National Motor Museum in Beaulieu, futuristic vehicle designs from past decades and classics from the early years of the 20th century.

Rétromobile 2016 will also feature auctions of historic cars, hosted by the Artcurial auction house among others.

The 300 S made its debut at the Paris Motor Show in October 1951, touted as the new flagship model of the passenger-car range.

The luxurious two-door model, which saw Mercedes-Benz entering the top end of the international market for the first time following World War II, was available in Coupé, Cabriolet or Roadster guise from summer 1952.

The Roadster version was essentially like the Cabriolet, although its lightweight soft top without storm bars lent it a more sporty appearance.

In autumn 1955 Mercedes-Benz unveiled a revised version of the 300 S with innovative direct petrol injection, which boosted output by 18 kW (25 hp) and at the same time increased efficiency.

The new variant, which featured the single-joint swing axle that had proven successful in Formula 1, was known in-house as the 300 Sc.

At the time it cost DM 36,500 to buy, making it the most expensive car produced by a German manufacturer.

By way of comparison, the legendary Mercedes-Benz 300 SL could be bought for DM 29,000 in 1956. With just 53 examples built, the 300 S Roadster with injection engine is one of the rarest passenger cars from the post-war years. 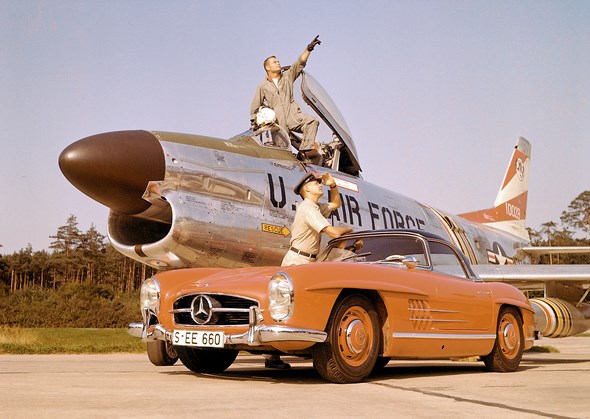 Mercedes-Benz unveiled the 300 SL Roadster as the successor to the 300 SL Gullwing Coupé at the Geneva Motor Show in March 1957.

On a technical level, the open-top sports car was very like the Coupé, although the modified space frame allowed the installation of conventionally attached doors, which were necessary for open-top driving.

The suspension was likewise modified: the single-joint swing axle with lowered pivot point on the 300 SL Roadster was equipped with a compensating spring for the first time.

From 1958, the Roadster was also available with a detachable coupé roof. It was from the standard-production 300 SL Roadster that the Mercedes-Benz engineers developed the 300 SLS racing variant with which Paul O’Shea won Category D of the American Sports Car Championship in 1957.

Production of the 300 SL Roadster was discontinued after seven years in 1963, during which time precisely 1858 examples of the highly exclusive sports car were built. 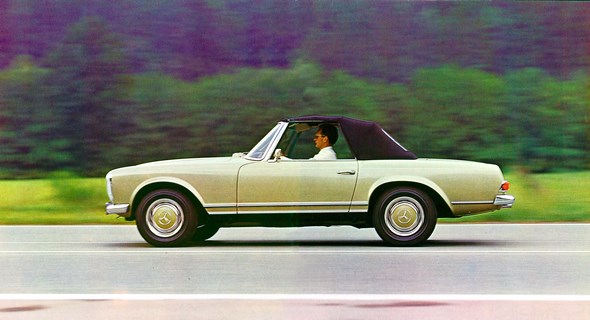 The “Pagoda SL” series W 113, thus called by enthusiasts because of its pagoda-shaped hardtop, managed the difficult balancing act between high-performance sports car and comfortable tourer.

It thus combined the qualities of its two predecessor models: the uncompromising 300 SL (W 198) standard-production sports car and the 190 SL (W 121), which was aimed more at sporty, comfortable touring.

These attributes won the “Pagoda SL” the hearts of a very ambitious clientèle, who wanted the extraordinary performance and superior power delivery of a thoroughbred sports car as well as the spaciousness and ride comfort of a luxury tourer.

Thanks to greater elasticity, this above all made the six-cylinder in-line model nicer to drive and more refined.

Hence the 280 SL model in the “Pagoda” line-up was almost as popular with buyers as the 230 SL and 250 SL combined, the latter of which was only built for about a year. 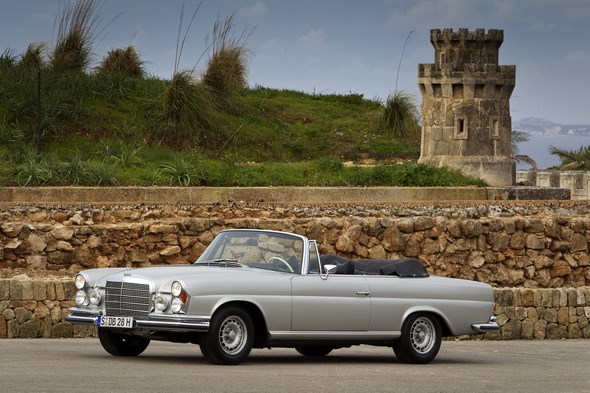 In terms of design and style, the family of luxurious open-top cars is based on the “Tail Fin” saloons of the W 111 series unveiled in August 1959.

The Coupé and Cabriolet models likewise featured the safety body with crumple zones that had been introduced as a world first for the Saloon models.

Alongside the 220 SE and its successor, the 250 SE, the exclusively equipped and powerful 300 SE (W 112) augmented the range of luxury two-door models.

The flagship model was exceptionally refined yet also boasted sports car-like performance. The Cabriolet also underwent slight stylistic modifications: the radiator grille was lower and wider, for instance, while the bonnet was flatter at the front.

Only 1232 examples of the eight-cylinder Cabriolet equipped with an automatic transmission as standard were built, and today it is one of the most sought-after classics of its era. 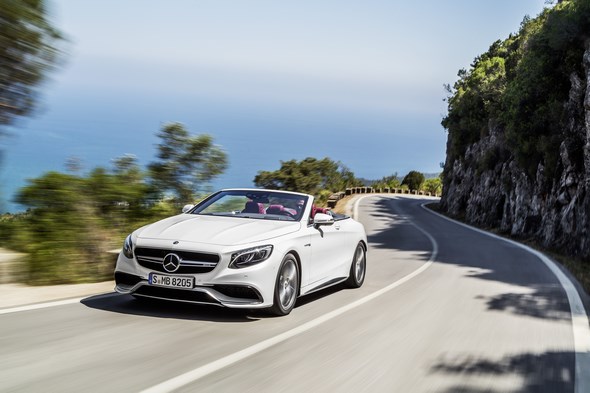 Mercedes-Benz unveiled the new S-Class Cabriolet due for market launch in spring 2016 back in autumn 2015.

It is Mercedes-Benz’s first open-top luxury four-seater since 1971, when production of the W 111 series luxury cabriolets was discontinued.

The A 217 model series boasts an unmistakable, sensual and exclusive design, which combines the cutting-edge technology of the current S-Class with an extensive heat and wind protection concept as well as intelligent climate control for cabriolets.

The outstanding ride comfort in the S-Class is largely down to its very stiff construction, incorporating innovative solutions such as a luggage compartment firewall made of aluminium and magnesium as well as a rear section constructed of aluminium.

At the same time, the lightweight materials limit the vehicle bodyshell weight to that of the S-Class Coupé.

The roll-over protection system fitted as standard behind the rear head restraints is a first in that not only are the actuators triggered pyrotechnically, but the bars themselves are also moved into position by a gas generator.

The soft top can be opened and closed while driving at speeds up to 60 km/h.

In November 2015, the Los Angeles Auto Show was the venue for the premiere of the technically and visually enhanced SL-Class model series R 231.

The facelifted Roadster is due to be launched in April 2016. The new SL-Class marks the continuation of Mercedes-Benz’s unique tradition of elegant sportiness, which began with the motorsport-inspired 300 SL in the 1950s.

Compared with the first version of the R 231 unveiled in 2012, the new SL boasts an even more dynamic design and more powerful engines.

The roof, which can now be operated at speeds of up to 40 km/h, and the automatic boot separator are further convenience features which make the luxury sports car even more of a pleasure to drive.

190 SL contending for the first time