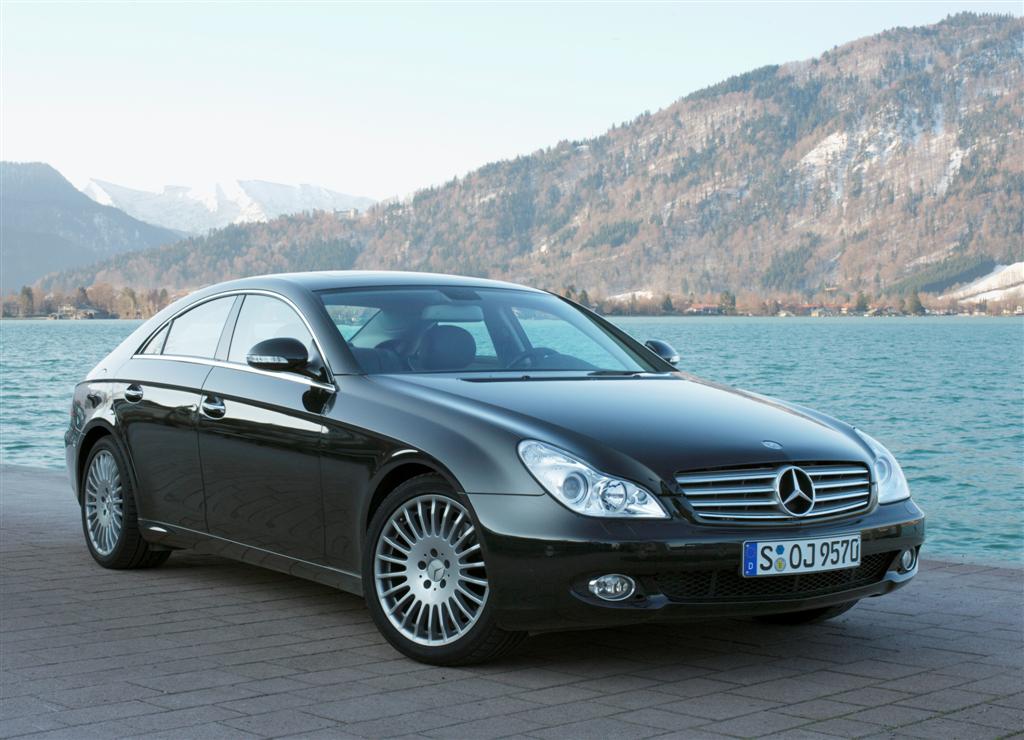 Stuttgart, The Mercedes-Benz CLS-Class will kick off model year 2007 with three newly developed engines, even better safety and a more extensive range of standard equipment. The four-door Coupe is powered by the worlds first petrol engine featuring piezoelectric direct injection and spray-guided combustion. The 215 kW/ 292 hp six-cylinder engine of the CLS 350 CGI consumes about ten percent less fuel than a comparable V6 petrol engine with port injection. The CLS 500 will be equipped with the new V8 engine from the S-Class, whose output of 285 kW/388 hp is about 26 percent higher than that of the previous eight-cylinder engine. Another new development is the CLS 63 AMG, whose V8 naturally aspirated engine generates 378 kW/ 514 hp. Mercedes-Benz is enhancing the vehicles standard range of safety features by adding the PRE-SAFE anticipatory occupant protection system and flashing brake lights. The new CLS-Class models will celebrate their market launches in June 2006.
In October 2004, Mercedes-Benz unveiled the four-door CLS-Class as a new kind of vehicle concept that for the first time combined the dynamism and features of a coupe with the comfort and functionality of a saloon. In mid-2006, Mercedes-Benz will be further enhancing this series exclusive range of equipment and cutting-edge technology. In doing so, it will particularly set new standards with regard to safety and engine technology. 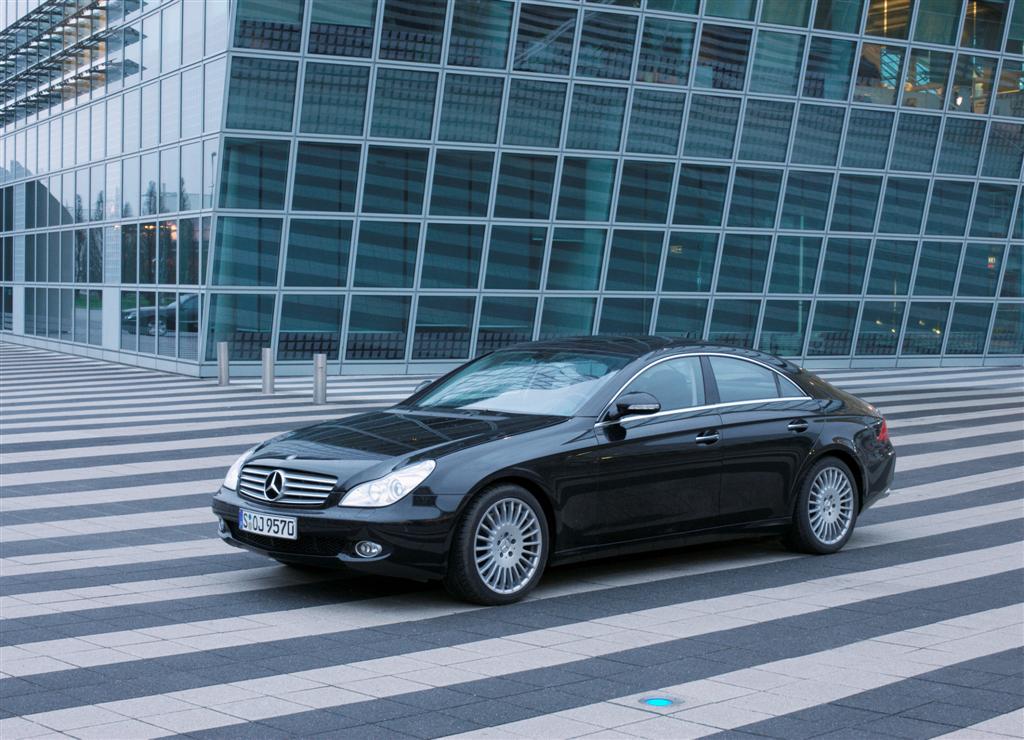 The worlds first direct petrol injection system with spray-guided combustion points the way ahead for passenger car petrol engines, and will be available in the new CLS 350 CGI from the third quarter of 2006. The engines innovative injection procedure makes for much better fuel and thermodynamic efficiency than the wall-guided combustion process previously employed with direct injection. With a fuel consumption of 9.1 9.3 litres per 100 kilometres in the European driving cycle, the six-cylinder Coupe has a range of approximately 70 kilometres on one tankful (80 litres). 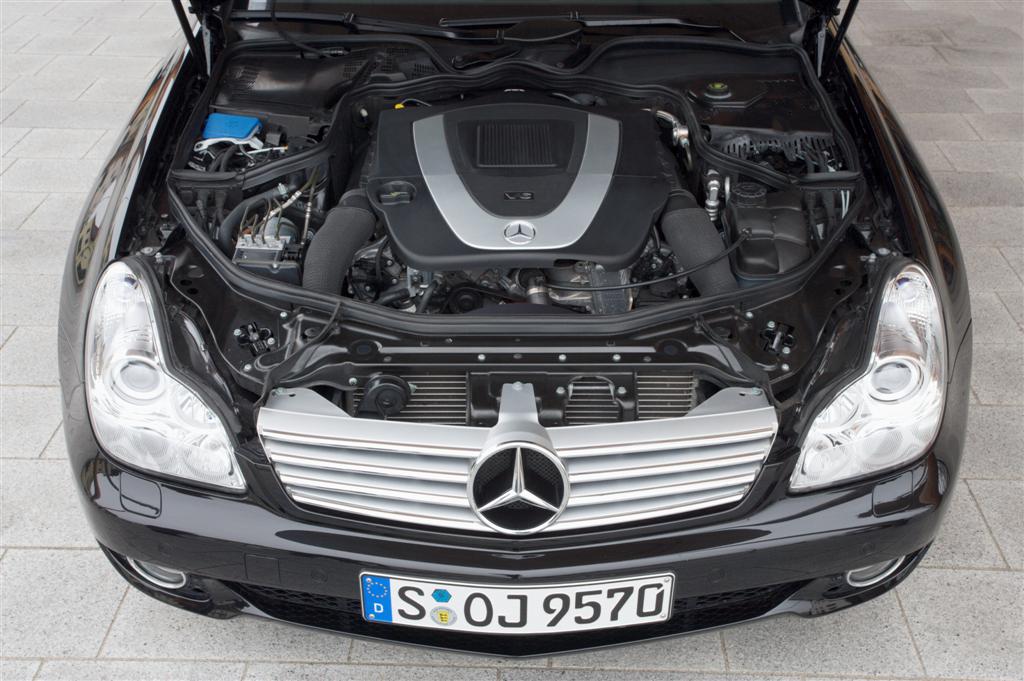 The main advantage of the CGI engine (CGI = Stratified-Charged Gasoline Injection) lies in the stratified operating mode from which it takes its name. In this mode the engine is run with high excess air and thus excellent fuel efficiency. Now, thanks to multiple injection, it is for the first time possible to extend this lean-burn operating mode to higher rpm and load ranges too. During each power stroke, a series of injections takes place, spaced just fractions of a second apart. This has the effect of significantly improving mixture formation, combustion and fuel consumption.

Among the most important components of this innovative direct petrol injection system are the fast-acting piezoelectric injectors. They have nozzles which open outwards to create an annular gap just a few microns wide. This gap shapes the fuel jet and produces a uniform, hollow-cone-shaped spray pattern. The microsecond response times of the piezoelectric injectors provide the basis for delivering multiple injections per power stroke, and thus for lean-burn operation. By allowing flexible and efficient control of the combustion process they play a key part in ensuring the engine’s outstanding fuel efficiency. 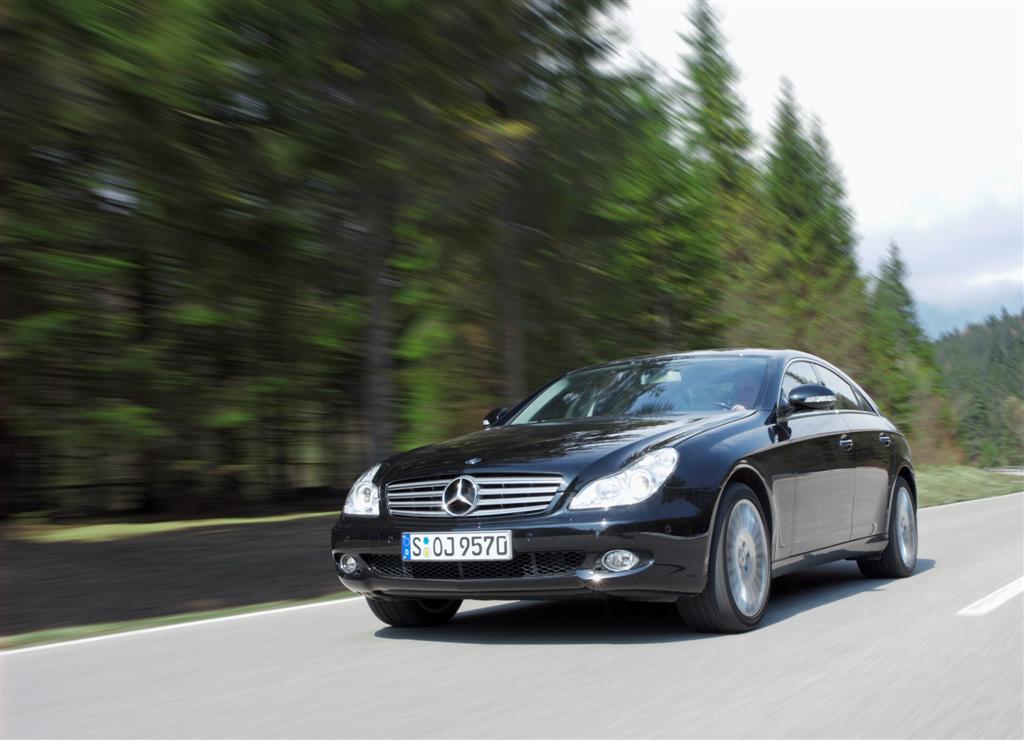 The Mercedes direct-injection engine can still operate in a lean-burn stratified mode at speeds in excess of 120 km/h. When driving on main roads and motorways at largely constant speed and with proper anticipation, the CGI engine outperforms the fuel economy of the six-cylinder engine with conventional injection technology by up to 1.5 litres per 100 km, a saving of approximately 15 percent. 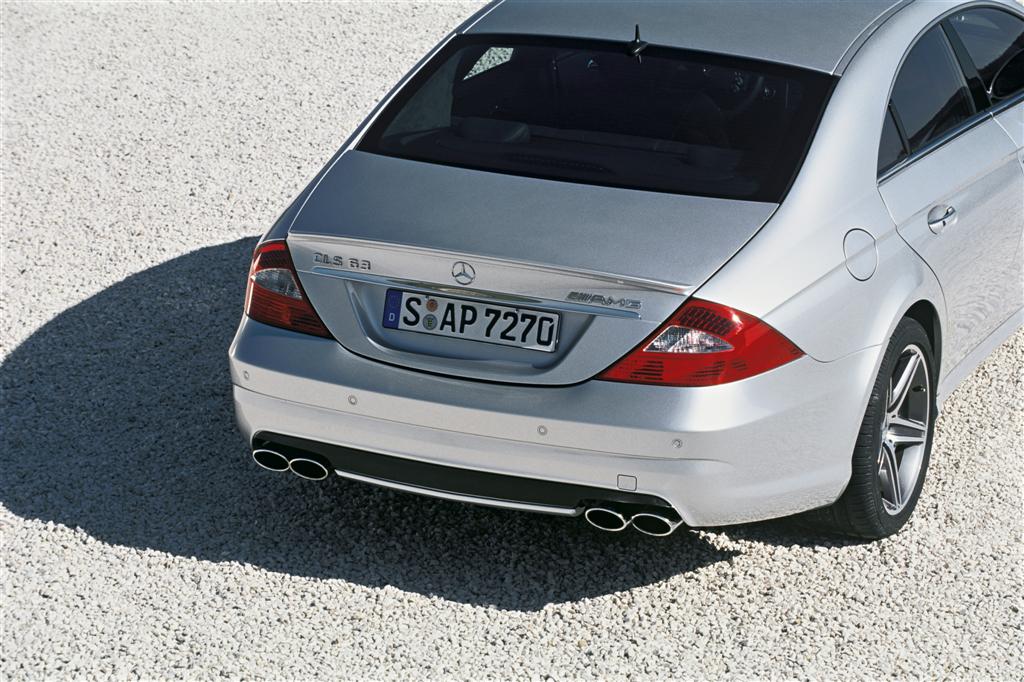 Low fuel consumption and excellent power delivery are not at odds with each other on the second-generation Mercedes-Benz direct petrol injection model. On the contrary, the engine delivers 15 kW/20 hp more power than the conventional-injection V6 and four percent more torque. Thus the CGI engine combines its excellent fuel economy with a level of effortless driving enjoyment that is unprecedented in the six-cylinder segment. This allows the new CLS 350 CGI to accelerate from zero to 100 km/h in just 6.7 seconds on its way to a top speed of 250 km/h (electronically limited).Two new eight-cylinder engines and a V6 diesel with higher torque 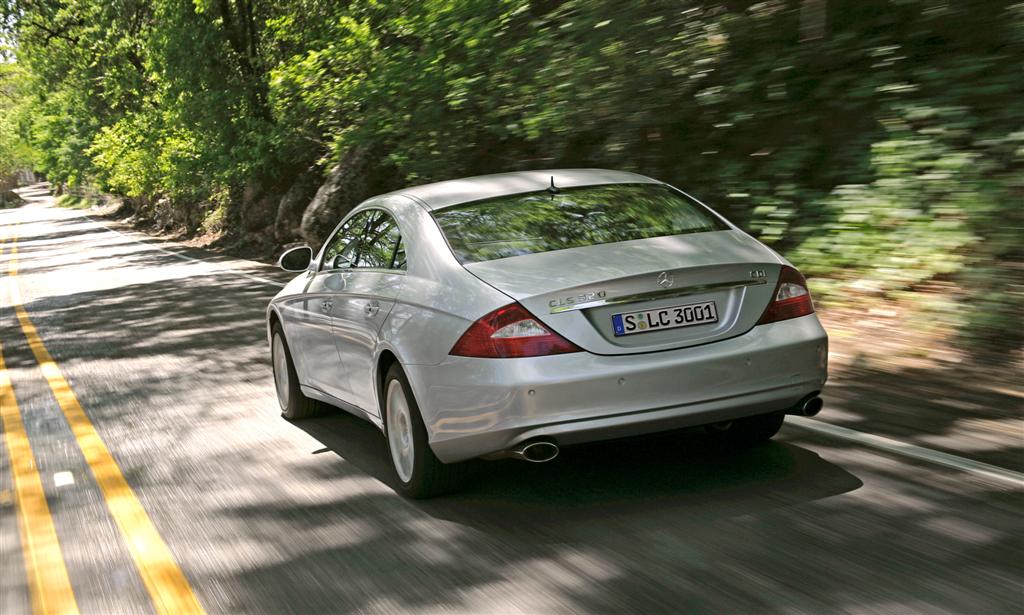 The range of engines for the CLS-Class now includes two eight-cylinder engines with high output and torque. The CLS 500 will be equipped with the 285 kW/388 hp V8 engine from the S-Class, whose output surpasses that of the previous eight-cylinder unit by about 26 percent. At 530 Nm the engines maximum torque also exceeds that of its predecessor by around 15 percent. The new CLS 500 accelerates from 0 to 100 km/h in just 5,4 seconds, 0.7 seconds faster than the previous model. 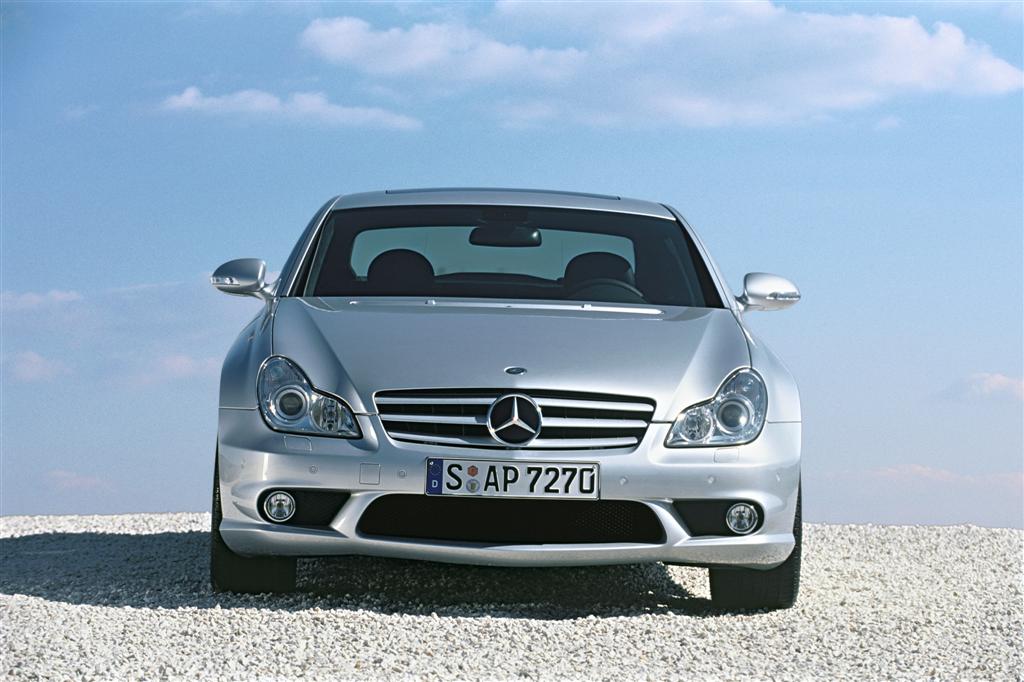 Mercedes-AMG has developed the new CLS 63 AMG, which is powered by a 378 kW/ 514 hp V8 naturally aspirated engine. The new vehicles output has been increased by 28 kW/38 hp compared to the predecessor model, the CLS 55 AMG. 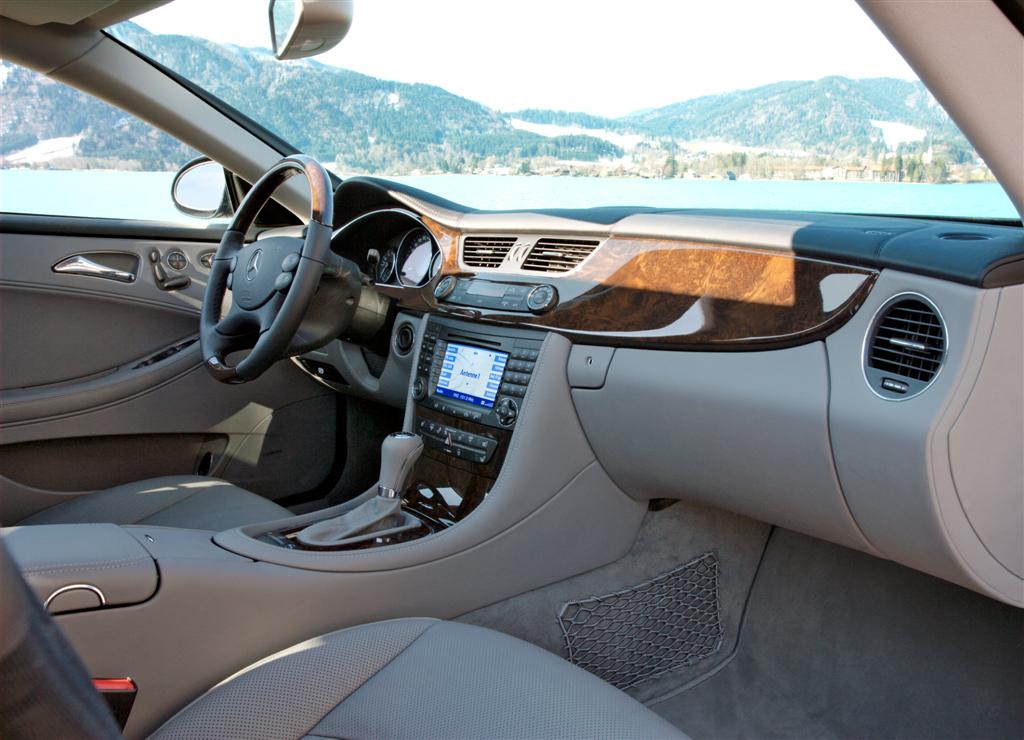 All of the CLS engines will be combined with the 7G-TRONIC seven-speed automatic transmission, which comes as standard equipment. Whats more, manual gear switching will be improved as a result of optional new gearshift paddles conveniently located on the steering wheel. 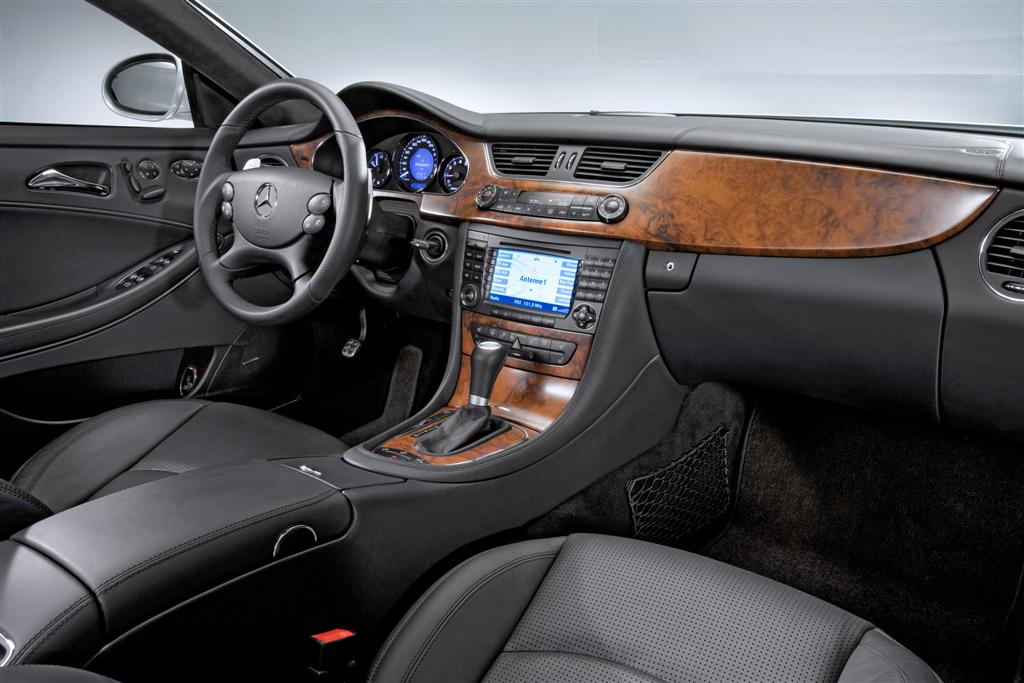 In the future the CLS-Classs range of standard equipment will be enhanced by the internationally award-winning occupant protection system PRE-SAFE. The system automatically responds by preparing the vehicle and its occupants for an impending collision. It does this by tensioning the seat belts of the driver and front passenger, adjusting the front passenger seat to an optimal crash position, and automatically closing the sunroof and the side windows if the vehicle is in danger of skidding. Such precautionary measures ensure that seat belts and airbags offer the best possible protection in the event of an impact. Just as unique as PRE-SAFE are the NECK-PRO head restraints which are also fitted as standard. During a rear impact the sensor-controlled head restraints are moved forward to provide protection for the drivers and front passengers heads within milliseconds. This allows the crash-responsive head restraints to reduce the risk of whiplash injuries.

Mercedes-Benz is fitting the CLS-Class with flashing brake lights as standard to prevent rear-end collisions. These lights are more effective than conventional brake lights at warning drivers approaching from behind. And due to faster braking reaction times, the braking distance can be reduced by about 5.5 metres at 100 km/h. 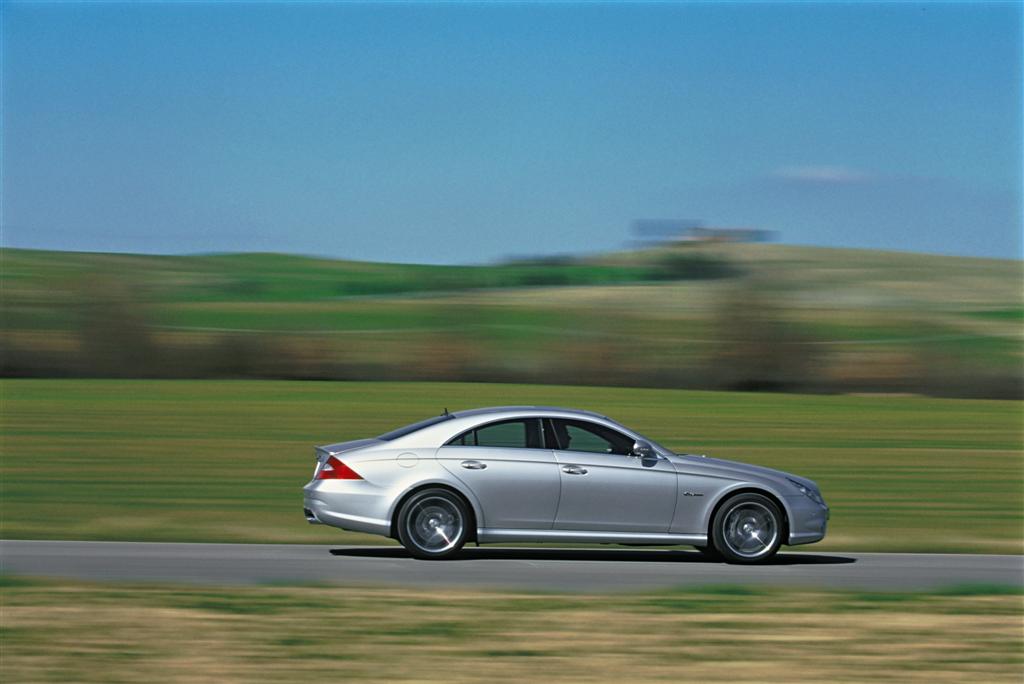 Beginning in mid-2006, standard equipment for the CLS-Class will include the ADAPTIVE BRAKE system originally developed for the S-Class. Electronic control enables the hydraulic braking system to provide support functions which further improve safety during emergency situations or when driving on wet roads. In addition, ADAPTIVE BRAKE makes starting on hills easier and prevents unintended forward rolling at traffic lights or in stop-and-go traffic.

The new CLS models will cost between 56,434 euros and 101,094 euros. The price of the CLS 320 CDI will remain unchanged, despite an increased range of safety features and a higher-torque engine.