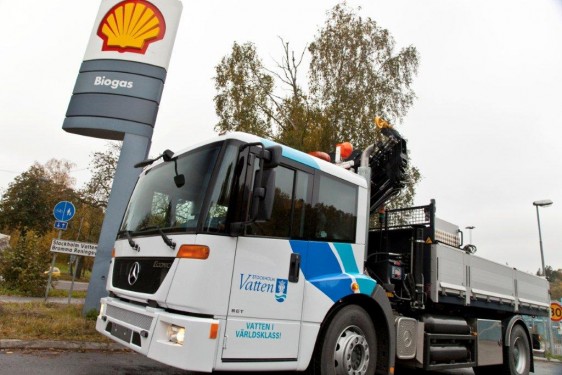 Stockholm – The Mercedes-Benz Econic NGT is an environmentally friendly vehicle designed specifically for municipal operations, garbage collection, and short-range distribution. Thanks to its low-emission drive system it helps to keep inner cities clean and quiet. Operation with biogas is particularly environmentally friendly, because it is CO2-neutral. This is the case, for example, in Stockholm, where the international company Sita (Suez Lyonnaise des Eaux) has been using Mercedes-Benz Econic NGT (Natural Gas Technology) trucks for garbage disposal applications for more than six years now, whereby the Econics in Sweden’s capital are being operated for the first time exclusively with biogas (methane) produced in-house from renewable sources. Sweden has now ordered a further 27 Econic natural gas vehicles from the Mercedes-Benz plant in Wörth near Karlsruhe. As a result, Sita now has a fleet of 98 Mercedes-Benz Econic trucks in Sweden; 81 of the vehicles have natural gas drive and more than 70 of the trucks are powered by environ­mentally friendly biogas.
The biogas used is obtained primarily from sewage sludge disposal systems, although garbage disposal facilities also now serve as a source. The Econic thus costs nearly nothing to drive. In any case, it is completely independent from petroleum, and thus free of the associated emissions and costs. The biogas used is collected in large containers that are then hooked up to gas pumps at filling stations. 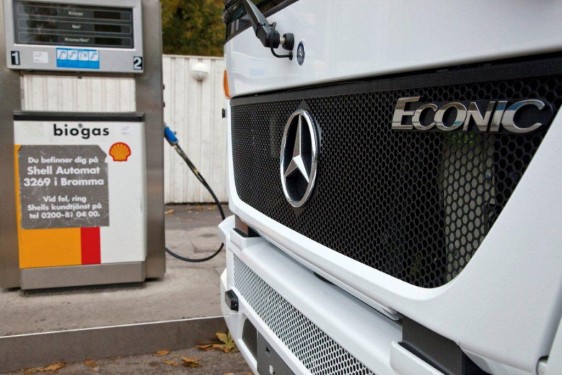 Natural-gas Econic is a “green hit”
The Mercedes-Benz Econic’s natural gas drive makes the vehicle’s emissions lower than those allowed by the EEV standard, currently the most stringent in the world. Its engine produces neither CO2 nor particulates and is also extremely quiet. The M 906 LAG natural gas engine generates 205 kW (279 hp) from a displacement of 6.88 liters. Power is transferred by a six-speed automatic transmission. EEV stands for “Enhanced Environmentally friendly Vehicle.” Because it more than meets the EEV standard’s requirements, the Econic is permitted to bear the “Blue Angel” seal and may also be driven in any low-emission zone. Such attributes offer a very convincing argument to potential customers, which is why more and more Econics are now being used in municipalities. Berlin currently has 63 Mercedes-Benz Econic NGT vehicles in operation, Sweden more than 250, Athens 108, Paris 22, Prague 11, and Valencia 36. All in all, there are now over 950 Econic NGTs on the road in Europe.

The Econic, first unveiled in May 1998 at the Entsorga trade fair in Cologne, was considered a niche model for quite some time. The vehicle already had a natural gas engine when it was presented; this engine was produced by the Group’s NAW (Nutzfahrzeugwerke Arbon Wetzikon) subsidiary and was later continually enhanced in what was then known as the Center of Expertise for Low-Emission Commercial Vehicles at the Mannheim engine plant. Still, diesel fuel was cheap in the 1990s, so only a few municipalities were willing to experiment with natural gas drives. 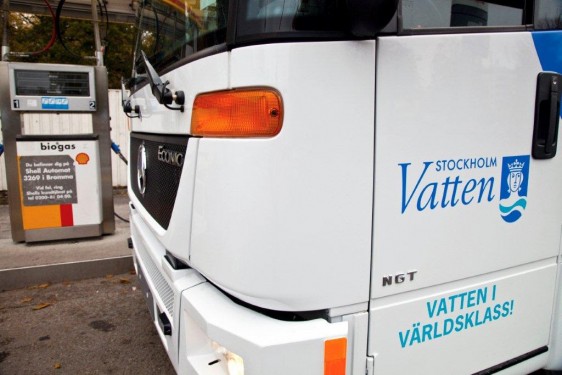 However, with increasing environmental awareness, rising diesel prices, and more stringent air quality controls, the versatile specialist has become a “green hit” that is now improving cleanliness and air quality in more and more major European cities. Athens, for example, recently ordered 108 Econics to reduce the extreme levels of smog the Greek capital is frequently subjected to.
Like many other European cities, Stockholm has outsourced its garbage disposal system to private companies in order to save money. One of these companies is Sita, which has its headquarters in France and is the private-sector waste disposal market leader in the Nordic countries, the Netherlands, and Belgium.
Sita was established through a merger between Suez and Gas de France in 2006 that created the world’s largest liquefied natural gas company.

The Hogans take a ride