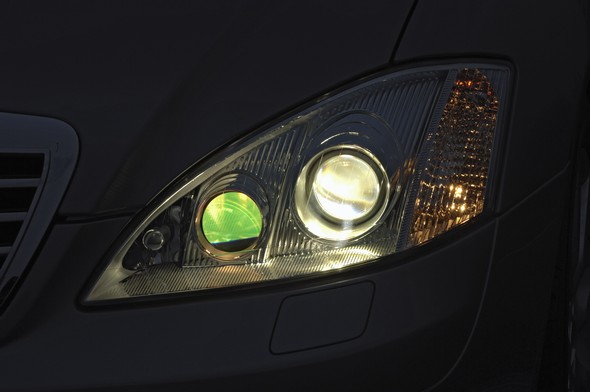 • New technology for the prevention of accidents at night

The risk of serious injury in road traffic is much greater in twilight and in the dark than during daylight hours.

Although average traffic density is reduced to only around 15 percent at night, more than one in three fatal traffic accidents occur at this time. 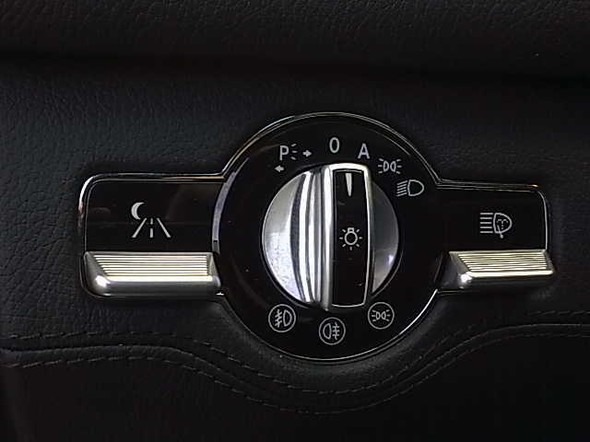 Accordingly Mercedes-Benz has for many years been devoting great research efforts to making driving safer at night.

New developments such as xenon lowbeam headlamps (1995), bi-xenon headlamps (1999), the Active Light System (2003) and the cornering light function (2004) have made important contributions.

Night view assist, which is celebrating its European premiere in the new S-Class, is a further milestone in this area of passenger car technology.

It is optionally available in conjunction with bi-xenon headlamps and the Active Light System.

This means that the new Mercedes flagship model has a unique package consisting of the best and most effective lighting technology currently available. 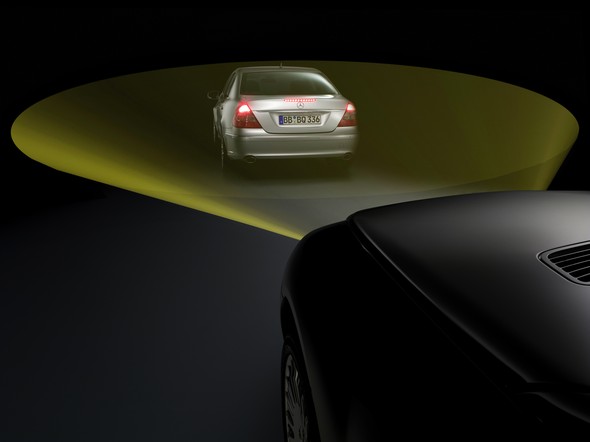 In the dark, the newly developed night view assist system provides the driver with a much greater range of vision than conventional low-beam headlamps, enabling the course of the road, pedestrians, cyclists and obstacles to be recognised much sooner.

At the same time the system relieves driver stress during tiring journeys at night, keeping the driver fit enough to respond rapidly and appropriately in critical situations. 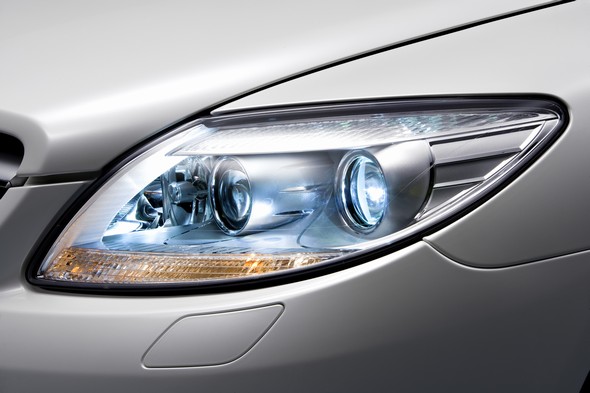 This innovative system was developed on the basis of accident research:

Accident researchers have concluded that problems of visual perception play a part in every second accident at night.

This is why they consider visibility from the vehicle and the early detection of other road users to have further potential for improving road safety in the hours of darkness.

The night view assist system in the new S-Class is able to make a major contribution to this, as accident analyses by Mercedes-Benz have confirmed: on the basis of data obtained from a joint accident research project conducted by German automobile manufacturers and the German road transport authority, Mercedes-Benz specialists have analysed the accident pattern at night and identified a high safety potential for night view assist. 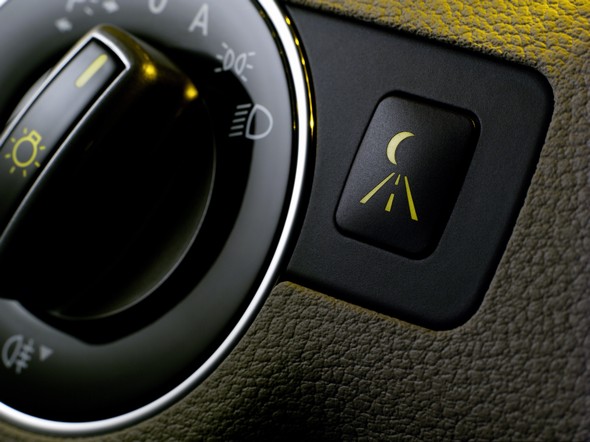 During collisions at night there is a preponderance of cases where drivers lose control of their vehicle – often because they are unable to recognise the course of the road in time and do not adjust their speed.

Around 54 percent of these vehicles leave the road, and more than one quarter of these (26 percent) collide with oncoming traffic. 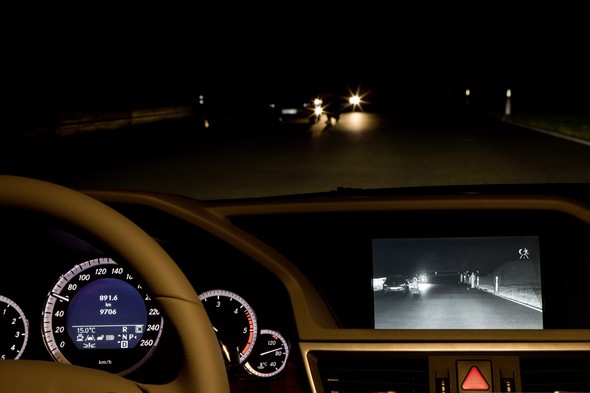 The new night view assist system can also help to improve the safety of pedestrians, as German accident statistics indicate that more than 55 percent of fatal accidents involving pedestrians occur in twilight or darkness. 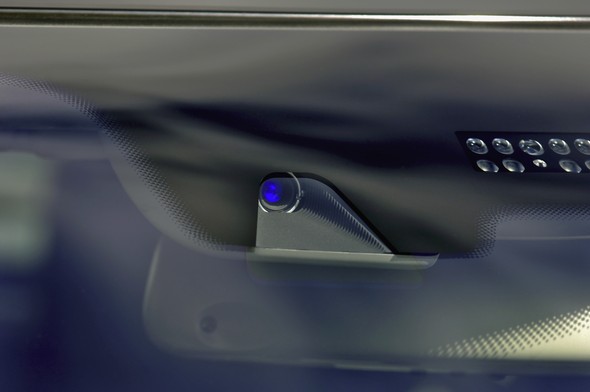 Technology: infrared beams in the headlamps, camera on the windscreen

As soon as night view assist is activated, the display in the centre of the instrument cluster is switched over to show the camera image.

The large eightinch display is directly in the driver’s field of vision, and he can use it like thespeedometer and cockpit instruments to glance down regularly, monitor the situation ahead of the S-Class as shown by the infrared image and adjust his driving accordingly. 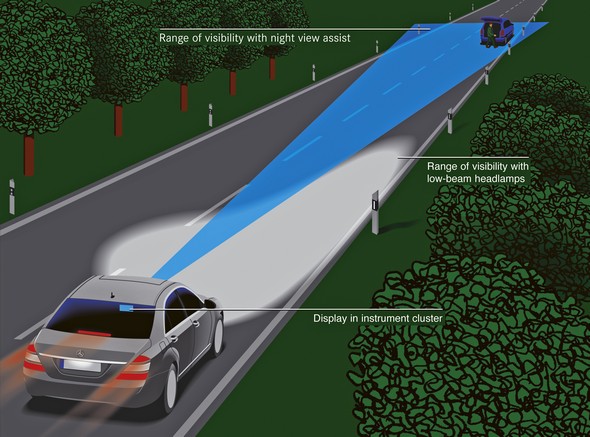 When the system is switched on, the speed indication changes from a dial instrument to a horizontal, bar-type display at the lower edge of the camera image. 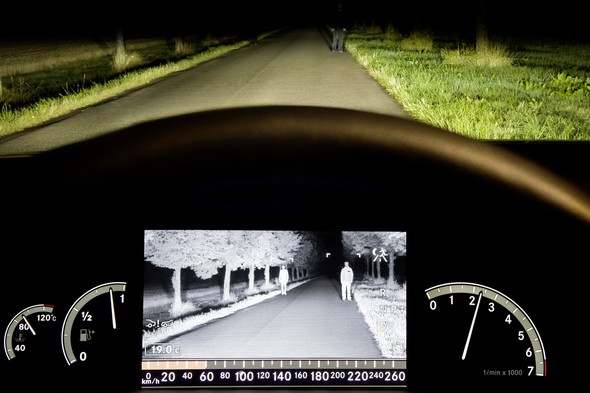 Mercedes engineers examined the capabilities of this technology in a series of trials.

During comparative test drives with low-beam bi-xenon headlamps and the new night view assist system, the male and female test drivers recognised obstacles in the road much sooner when assisted by the infrared light system.

During tests, drivers were already able to discern test dummies at the roadside dressed in light-coloured clothing at a range of around 210 metres, which is about 41 metres sooner than with low-beam bi-xenon headlamps.

The system proves even more effective in the case of pedestrians in dark clothing. In these situations the night view assist system already enabled the drivers to identify the test dummies at a range of around 164 metres, but only at about 72 metres when driving with low-beam bi-xenon headlamps alone. This represents a safety improvement of no less than 125 percent. 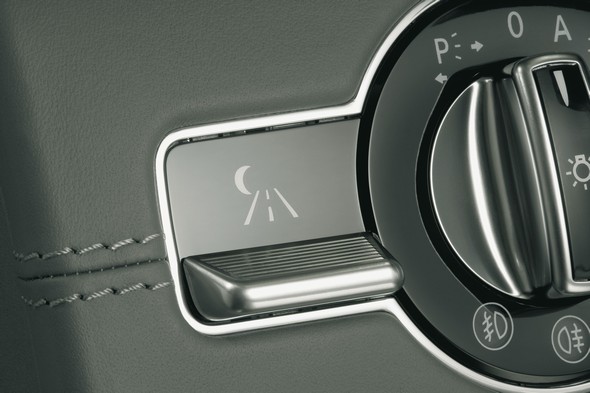 Even when the headlamps of oncoming vehicles dazzle the driver and heavily obscure the view, visibility is much better with this support system: a test dummy in light-coloured clothing standing at the road edge 50 metres behind anoncoming vehicle was detected from an average distance of 140 metres with the help of night view assist – around 53 metres sooner than with low-beam bi-xenon headlamps.

Mercedes-Benz will be offering Night View Assist – available for the S-Class since 2005 – for the new E-Class.

The system uses infrared technology to enhance the driver’s range of vision in the dark: two separate headlamps illuminate the road with invisible, non-reflective infrared light. 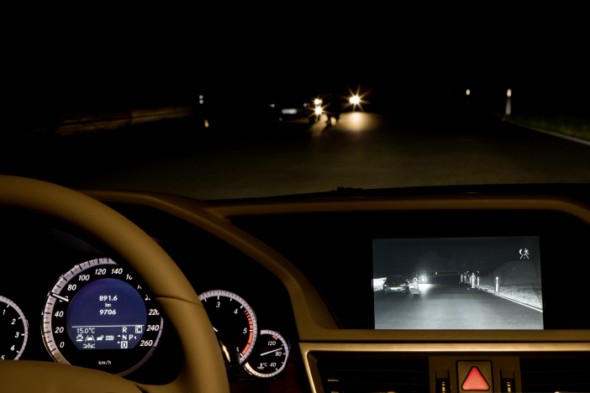 A windscreen-mounted cameradesigned to pick up precisely this type of light records what happens in front of the car and sends the image to a display on the dashboard.

The clear, needle-sharp greyscale image that appears here shows the scene in front of the car, allowing the driver to see pedestrians, cyclists or obstacles on the road at an early stage.

The Sindelfingen-based engineers have further developed Night View Assist and, in future, will be equipping it with a special pedestrian-detection function: as soon as the system detects pedestrians ahead of the car, they are highlighted on the display to make it easier for the driver to see them.

2011 Read more on the SPOTLIGHT function