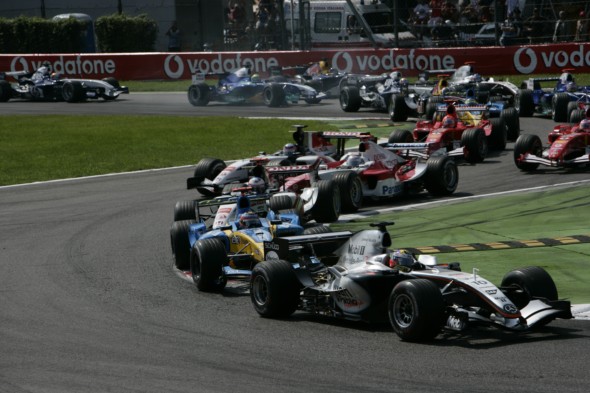 Mercedes-Benz officially returned to the pinnacle of motor sport, Formula 1, in 1994, in a collaboration with Sauber. The current McLaren Mercedes team was established in 1995, and has to date won three drivers’ world championships (1998, 1999 and 2008), and the constructors’ championship in 1998. 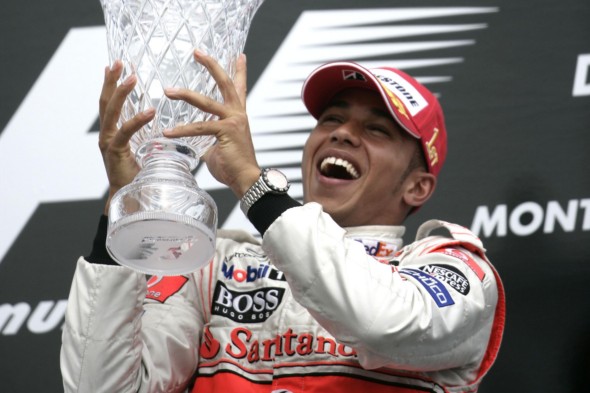 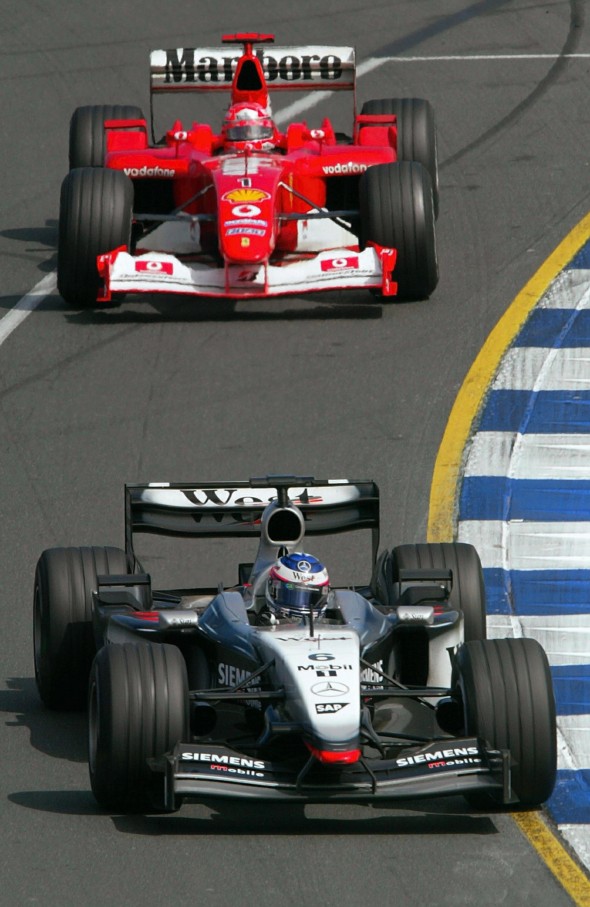 1995 saw the arrival of a new team on the Formula 1 stage: after the disappointing results of the collaboration with Sauber, Mercedes-Benz parted from the Swiss firm at the end of 1995, and now works with the McLaren International, a British racing stable with a long tradition behind it. Its owner, Ron Dennis, had set up some links with Mercedes-Benz at the end of the 1980s.

In just four-and-a-half months, the completely new FO 110 engine was designed for the 1995 McLaren-Mercedes MP4-10. This monoposto was the first result of the partnership between McLaren, Mercedes-Benz and the engine specialists at Ilmor. The V10 with displacement of three litres reached speeds of up to 15,600 rpm.

Drivers Mika Häkkinen (seventh in the drivers’ championship) and Mark Blundell (tenth) secured fourth place in the 1995 team standings in this car. In the improved MP4-11 for the 1996 season (particularly with regard to driver safety), Häkkinen (fifth) and his new fellow-team member David Coulthard (seventh) again achieved fourth place in the constructors’ championship – a result replicated in 1997 in theMP 4-12 (with Coulthard third place and Häkkinen in sixth). McLaren-Mercedes did, however, win three races in the 1997 season: the Australian and Italian Grand Prix (Coulthard), and the European Grand Prix (Häkkinen) in Jerez, Spain. 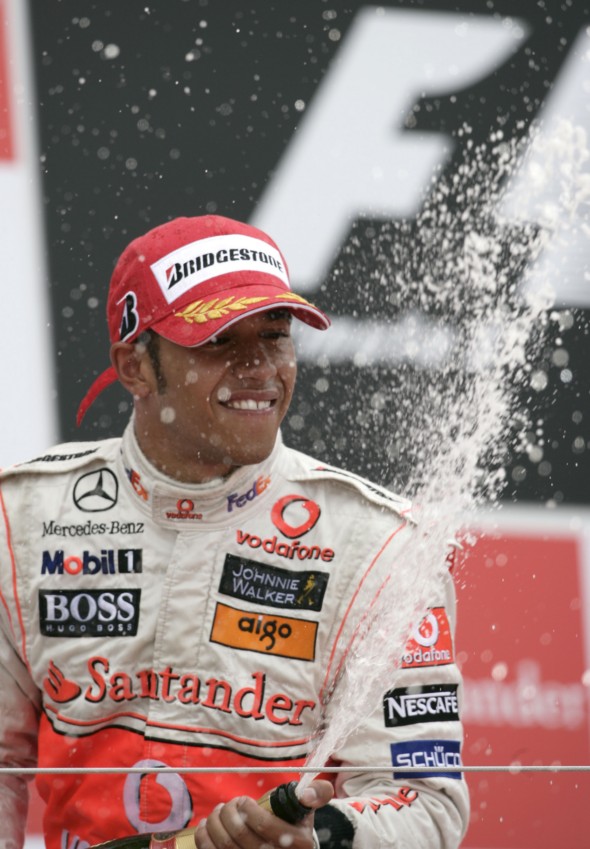 The German-British partnership finally achieved its goal of a world championship in 1998, with a double triumph: with Mika Häkkinen taking the world championship in his McLaren-Mercedes MP4-13, and Coulthard in third place in the drivers’ standings. McLaren-Mercedes also won the constructors’ championship. During that epic 1998 season, the Silver Arrow – since 1997, back in its traditional colour – was first across the line in Australia, Brazil, Spain, Monaco, Austria, Germany, Luxembourg and Japan (Häkkinen), and San Marino (Coulthard). 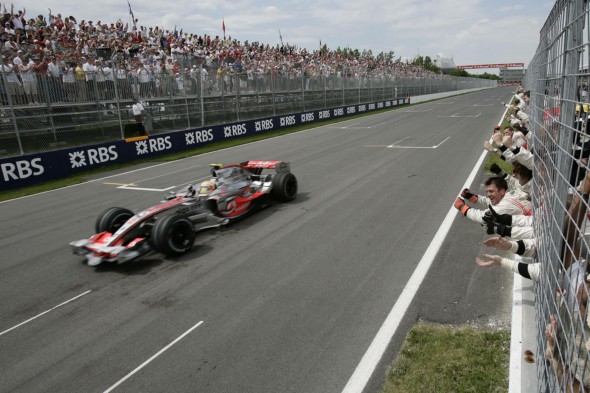 While the basic concept of the MP4-13 of the world championship car was derived from the MP4-12 from the previous year, substantial modifications to many details were required to comply with the changes to the regulations for the 1998 racing season. The track width and overall width were reduced by 20 centimetres, for example, which in turn required extensive modifications to the vehicle aerodynamics. A characteristic feature of the MP4-13 was the marked downward slope of the nose, ending just above the front wing. The cockpit – broader than before, in line with the regulations – was pushed further back to optimise weight distribution. This led to a longer wheelbase than in the MP4-12, along with a slight increase in total length.

Mika Häkkinen successfully defended his world championship title in 1999 in his McLaren-Mercedes MP4-14, with David Coulthard in fourth place. McLaren-Mercedes was runner-up in the constructors’ championship. That same year, Häkkinen won the grand prix races in Brazil, Spain, Canada, Hungary and Japan, and Coulthard won in the United Kingdom and Belgium. 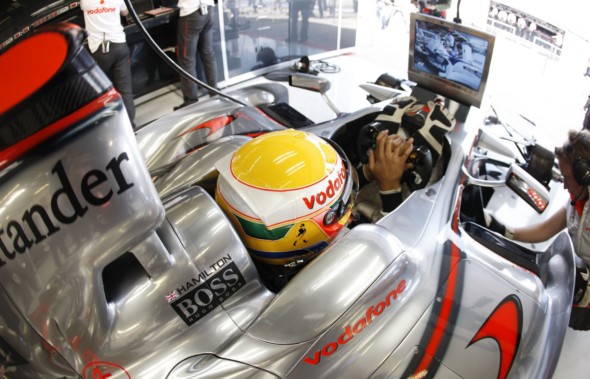 The racing car for the 1999 season was externally similar to its predecessor, but was actually a completely new development project. Innovations included mechanical and aerodynamic boosting of the contact pressure on the front axle. The downward slope of the nose in the MP4-14 was still more pronounced, and the overall centre of gravity in the monoposto powered by the FO 110 H engine was lower than in the 1998 vehicle. 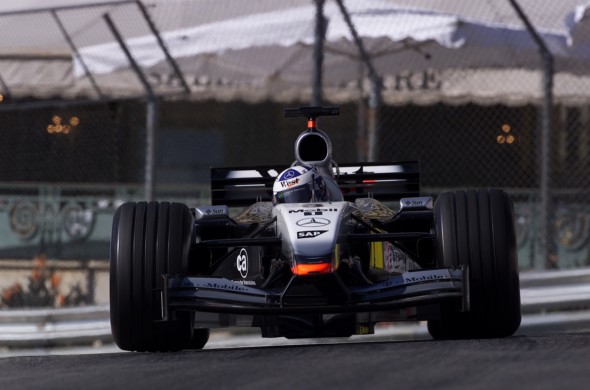 Häkkinen and Coulthard again secured runner-up positions for the team in the constructors’ championship in the following years. Mika Häkkinen drove his McLaren-Mercedes MP4-15 to second place in the drivers’ standings in 2000, with Coulthard in third place. The car had a flatter front nose and enhanced head guards on the sides of the cockpit, the engine, the three-litre V10 FO 110 J, was 20 centimetres shorter. An important innovation was the seven-speed gearbox, developed by McLaren itself. In the 2000 season, the Silver Arrow won races in Spain, Austria, Hungary and Belgium (Häkkinen), and in the United Kingdom and France (Coulthard). 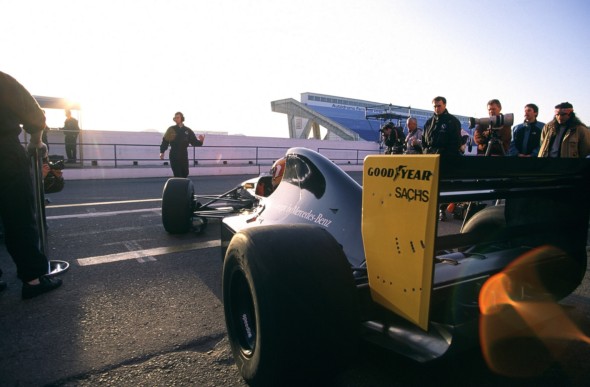 The 2001 season saw major changes to the Formula 1 rules. This meant that the McLaren-Mercedes MP4-16 was almost completely different from its predecessor. The front wing now had to be 50 millimetres higher – double the clearance from the track surface required previously. The position of the driver’s legs was raised, and the rules also required a substantially smaller rear spoiler. There were restrictions on the number of elements in the spoiler – a maximum of four, three at the top, one at the bottom. The Mercedes-Benz FO 110 K V10 engine, displacing three litres, was also a completely new development project. 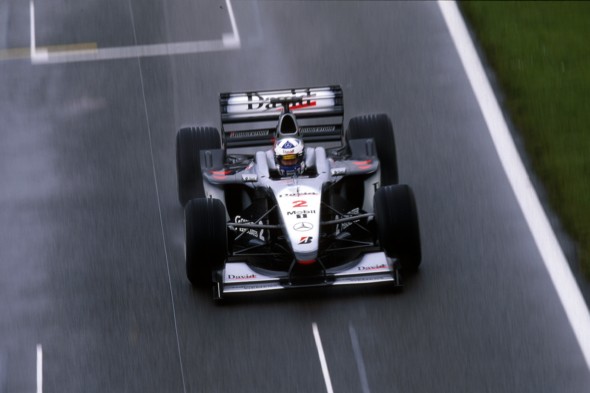 David Coulthard was second in the drivers’ championship that year, with Häkkinen in fifth place. Victories in Brazil and Austria (Coulthard) and in the United Kingdom and the USA (Häkkinen) again gave McLaren-Mercedes the runner-up position in the constructors’ championship. Mika Häkkinen retired from Formula 1 racing at the end of the 2001 season, and was replaced by his compatriot Kimi Räikkönen. 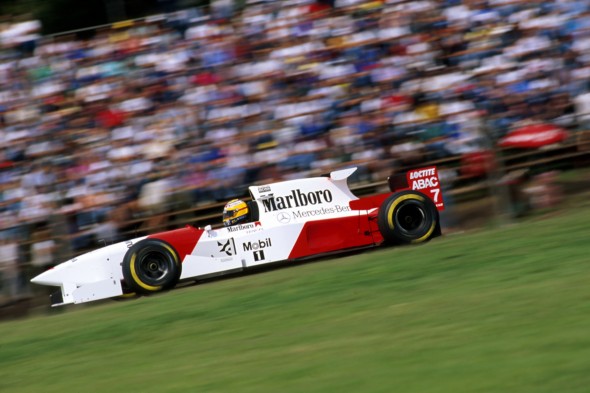 At the starting line for the Melbourne Grand Prix at the beginning of the 2002 season, it was not just the driver in one of the McLaren-Mercedes MP4-17s who was making his debut – the racing car with the FO 110 M ten-cylinder engine was a new vehicle, and Michelin had also come on board as the tyre supplier.

In the engine development sphere, Mercedes-Benz had decided to strengthen still further the relationship with the British specialists at Ilmor, and acquired a majority stake in the capital of the company, now known as Mercedes-Ilmor. The 2002 season ended with Coulthard and Räikkönen in fifth and sixth places, respectively, in the drivers’ standings, and McLaren-Mercedes was third in the brand championship. The sole victory during the season was Coulthard’s win in the Monaco Grand Prix. 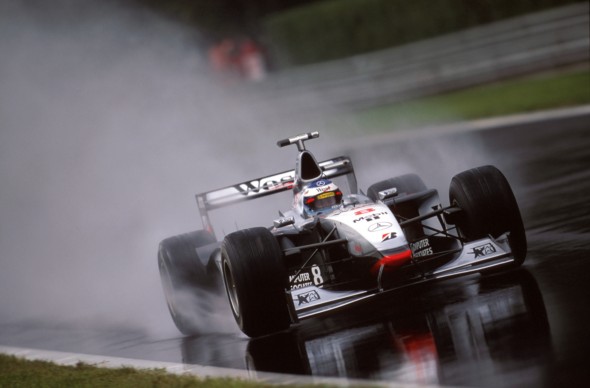 For the 2003 season, McLaren-Mercedes developed a new monoposto, the MP4-18. Obvious differences from its predecessor included the short and lower nose and more compact rear, in a shape similar to a dorsal fin. The new Mercedes-Benz V10 engine, the FO 110 P, was placed lower than in the predecessor vehicle, which also further lowered the car’s centre of gravity.

However, the revolutionary vehicle saw no racing action: the team competed in the season’s grand prix races with a further improved variant of the previous year’s car called the MP4-17D, while development work on the MP4-18 continued. Kimi Räikkönen was runner-up in the drivers’ championship in his second season with McLaren-Mercedes, with Coulthard in seventh place. McLaren-Mercedes was third in the constructors’ standings. Coulthard won the Australian Grand Prix in the MP4-17D, and Räikkönen won his first race in a Silver Arrow in the Malaysian Grand Prix. 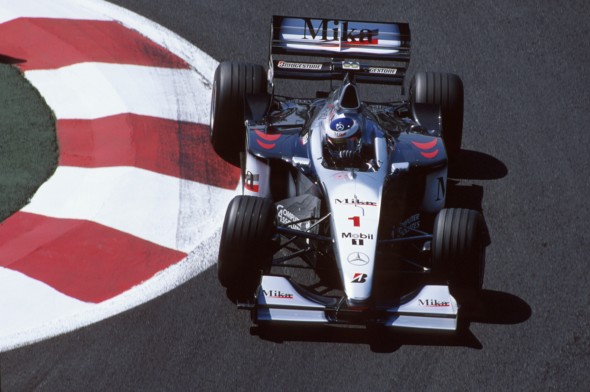 The team was unable to emulate these results in the 2004 season: Räikkönen drove the enhanced McLaren-Mercedes MP4-19 car, based on the MP4-18, to seventh place in the drivers’ championship, with Coulthard in tenth position. McLaren-Mercedes posted just one victory (Räikkönen’s win in the Belgian Grand Prix), and ended the season in fifth position in the constructors’ championship. 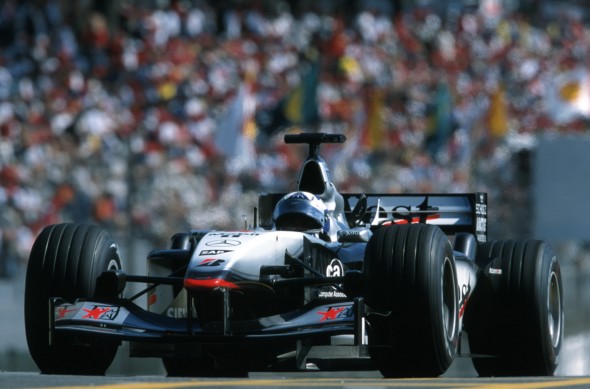 The McLaren-Mercedes MP4-20 for the 2005 racing season – now with a total of around 10,800 components – clearly reflected some major changes to the regulations. Engines now had to last for at least two races, and further changes were made to the aerodynamics requirements. Accordingly, the engineers spent around 3600 hours in the wind tunnel alone working on the new vehicle. The new Mercedes-Benz FO 110 R engine also had to be exhaustively tested and updated. 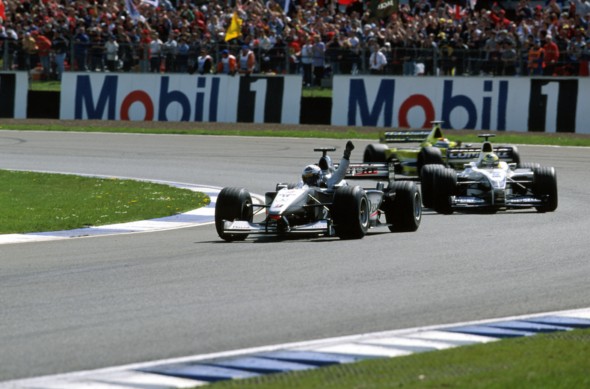 Because of the injuries suffered by Juan Pablo Montoya, four different drivers appeared at the wheel of a Silver Arrow during the season: Kimi Räikkönen was runner-up in the drivers’ championship, and Montoya was fourth. The replacement drivers were Alexander Wurz (17th) and Pedro de la Rosa (19th). McLaren-Mercedes was runner-up in the constructors’ championship. The team won grand prix events in Spain, Monaco, Canada, Hungary, Turkey, Belgium and Japan (Räikkönen), and in the United Kingdom, Italy and Brazil (Montoya) – a total of ten victories in 19 races. 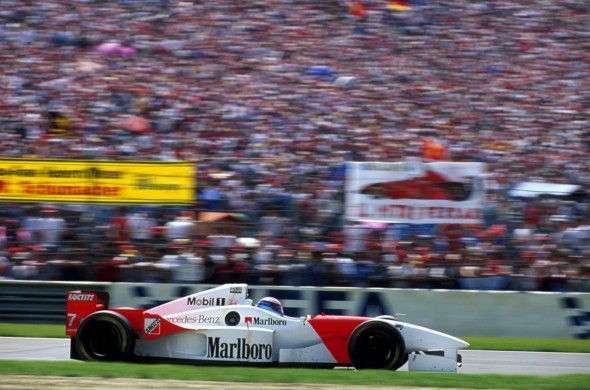 For the first time since the return of Mercedes-Benz to Formula 1 racing, the Silver Arrows did not have a ten-cylinder engine: the new regulations instead required a V8 engine, which impacted on the entire design of the MP4-21. As in 2005, the new engine had to be used on two consecutive grand prix weekends.

The Mercedes-Benz FO 108S V8 engine was a completely new design and construction project, and was tested for the first time in 2005. The rules for the engines included a cylinder angle of 90 degrees, no more than two intake and exhaust valves, a minimum weight of 95 kilograms and other parameter requirements. The V8 monoposto again brought McLaren-Mercedes third place in the constructors’ championship, and the drivers placed fifth (Kimi Räikkönen), eighth (Juan Pablo Montoya) and 11th (Pedro de la Rosa).

2007 came close to being a year of triumph for Vodafone McLaren Mercedes, as the team was called after the new main sponsor came on board. There were two new drivers at the wheel of the MP4-22: the young Briton Lewis Hamilton, a young talent nurtured by McLaren and Mercedes-Benz over many years, and the Spaniard Fernando Alonso.

In his very first season, Hamilton achieved podium positions in each of his first three races – a record in the history of Formula 1. During the season, he won grand prix events in Canada, the USA, Hungary and Japan. Alonso won in Malaysia and Monaco, at the European Grand Prix, and in Italy. Hamilton had a precarious lead in the drivers’ standing going into the last race for the year, in Brazil, but had to admit defeat in the final by a narrow margin to Felipe Massa in a Ferrari. 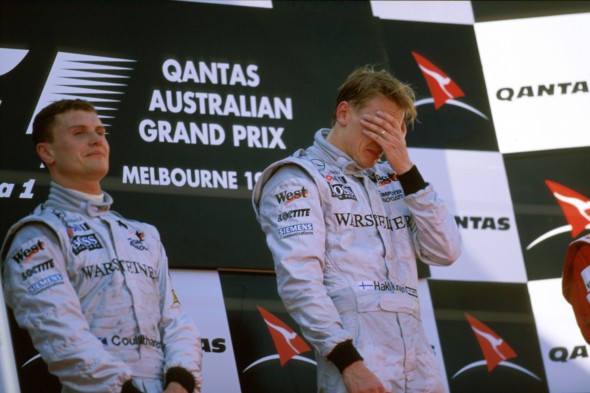 In 2008, Lewis Hamilton turned his narrow defeat the previous year into an equally narrow victory, when an overtaking manoeuvre in his MP4-23 in the closing stages of the last race of the season made him world champion. The Brazilian Grand Prix was raced in difficult conditions, because of rain just before the start and again soon before the end of the event. By overtaking Toyota driver Timo Glock in the last curve of the 71-lap race, Hamilton secured fifth position – enough to take the world championship with 98 points, just one more than the tally of Ferrari driver Felipe Massa. 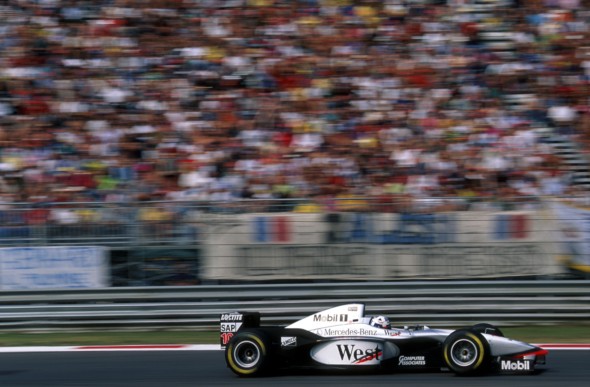 At the age of 23 years, 9 months and 26 days, Lewis Hamilton became the youngest champion in Formula 1 history. This was the third driver’s title for Vodafone McLaren Mercedes in Formula 1, following Häkkinen’s wins in 1998 and 1999. Vodafone McLaren Mercedes took second position in the constructors’ championship. The second Silver Arrow driver in 2008 was Heikki Kovalainen, who ended the season in seventh place in the drivers’ standings.

In the 2009 season, Vodafone McLaren Mercedes is competing with the new MP4-24. At the wheel again: Lewis Hamilton and Heikki Kovalainen. But for the time being another team whose Formula 1 racing cars are powered by a Mercedes Benz FO 108W engine is doing the winning: Jenson Button from the Brawn Mercedes Team, driving a BGP 001, has won five out of the first six races. 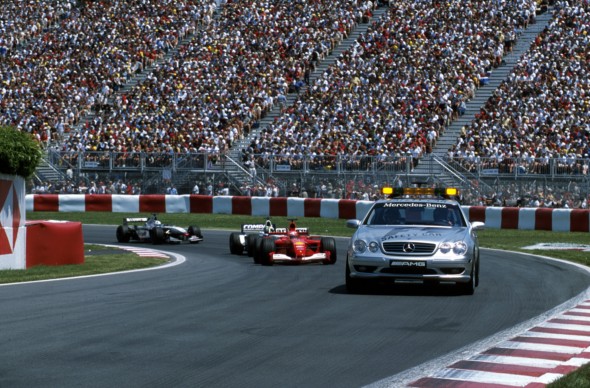 The excellent reputation of Mercedes-Benz as engine-supplying partner of international racing teams is not limited to the Formula 1, where the Brawn Mercedes und Force India Mercedes teams are using the FO 108W this season: legend, the 1994 season in the CART IndyCar World Series, won by the American Penske Team using an Ilmor-built Mercedes-Benz engine. 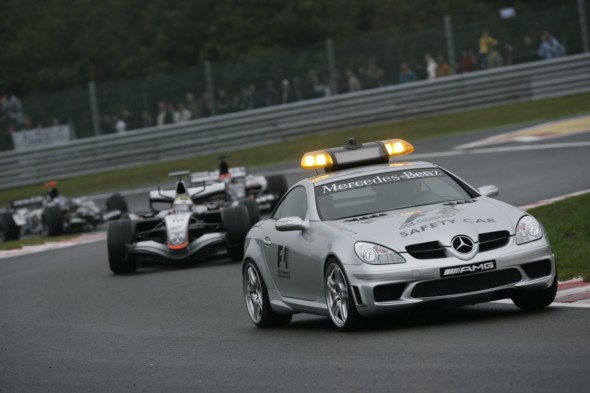 The Penske cars won twelve out of 16 races that year, including the Indianapolis 500. From 1994 to 1999 the cars of the Penske Team were equipped with Mercedes engines. 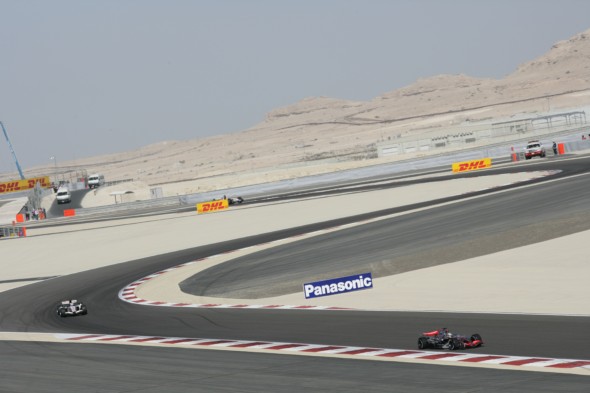 Mercedes Return to the racetrack

Powerful and efficient: an eight-cylinder developing up to 420 kW (571 hp) 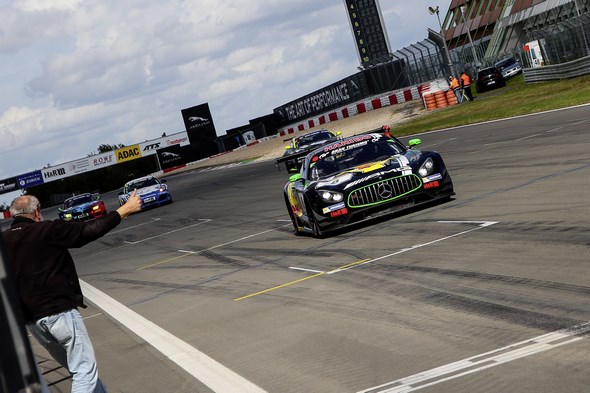 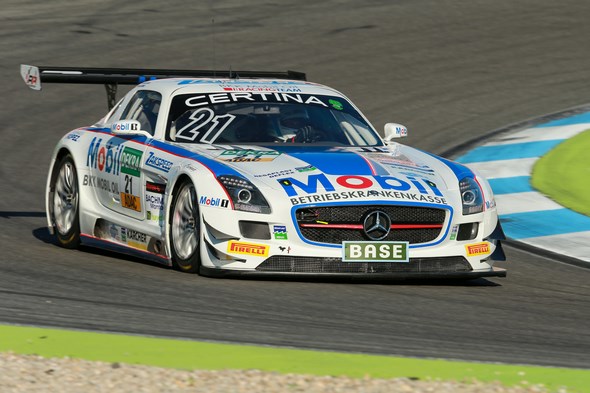 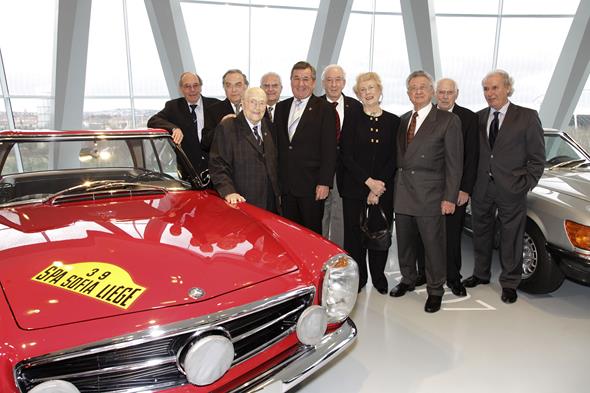