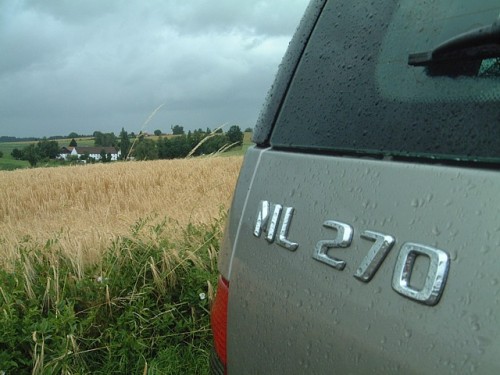 Testdrives of the new M-Class start soon, so I asked Mr. Schultz if I could try the old M-Class to experience the difference once the new one was available for testdrives. The weather was perfect for an SUV testdrive as well. First it rained hard and strong, then it just drizzled down lightly. Perfect SUV weather.

I was never a fan of the 1st generation M-Class. Early versions looked cheap on the outside and inside. The exterior received a refresh soon after but the interior was always a weakness and so was reliability. We all know the history of the M-Class anyway. The Final Edition version I would be driving would be the cream of all M-Classes ever made. This would undoubtedly be the best W163 M-Class ever made since they incorporated by now reliable technology, which the early M-Classes lacked.

The exterior looked really classy for an outdated design. I do think the M-Class has aged well but the design never really appealed to me. The Final Edition models get the hood domes of the ML55 AMG. On the inside, the interior wasnt the best but the Final Edition model used better materials that werent found on stock M-Classes. The ergonomics were very un-Mercedes-like. For one, the switch to turn on the lights was located to the left of the steering wheel in the signal stalk. There were so many damn cup holders in this car that I got sick of seeing them. Seriously, who needs that many cup holders!?

Preheating the diesel engine took a few seconds, then the engine came to life at a surprisingly quiet sound level. Surprising since the 2.7-l 5-cylinder wasnt the most quiet of DaimlerChrysler diesel engines, particularly in the C-Class (C270 CDI) and M-Class. I suppose Mercedes gave the engine and engine bay a little more sound insulation. Vibrations were very low early on, and disappeared almost completely after the engine was properly warmed up.

Early on, I loved the seating position of the M. You sat up so high and it was really fun. The steering feel was light and slightly vague, but I quickly adapted to it. For relaxed driving, the steering system would be more than adequate. But I did try to drive it sporty early on and found that this was something best not to be done with the ML270 CDI. The steering feel was simply to slow to respond to quick driver input. 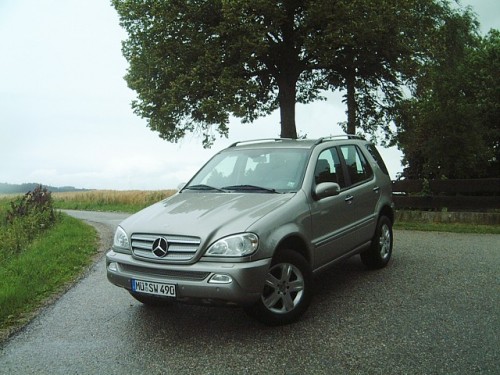 The suspension was what was to be expected of a luxury offroader. Hard. I think Mercedes tried to compensate a little bit because through all that harshness, I could sense a little softness. Despite this, the suspension wasnt ideal for comfort since it was loud (you could hear everything the ML touched, especially on rough roads) and harder than most MB suspensions. But since this car is an offroader, I acknowledge that theres a reason for this. End of the suspension story.

Now comes the good part: the engine. You folks in America are probably giggling thinking Man, those Europeans sure drive such underpowered pieces of trash, I want to cry! :p] :devil:] Underpowered? Did I say underpowered? I must admit, I always thought the ML270 CDI would be a slug, and people just bought it because of fuel economy. Surprisingly, I was proven wrong. Early on, I noticed how the torque made the engine appear eager and lively. In fact, acceleration was fluid whatever speed you hammered it at. At low speeds in the city, the ML easily accelerated to 50 km/h (max. permissible city speed): and you could feel it was all due to the huge torque reserves of the 2.7-l engine. Out in the country, the ML270 CDI was no slug. The 11.4 0-62 mph time felt underrated, the car felt much quicker. Realistically, Id say a 10.5 second 0-100 km/h time was pretty close to what it felt like. At low RPMs, the diesel torque shoved you back when you hammered the pedal. At higher speeds and low RPMs, the same thing was the case. Acceleration can best be described as fluid. Nothing brutally fast, but nothing slow either. For real world driving, the ML270 CDI certainly feels more than suitable enough. The 5-speed automatic the engine was mated too was flawless IMHO. I even shifted manually by engaging either the steering wheel shifts or moving the automatic lever into the – / + positions. In 2nd and 3rd gear particularly, the 270 CDI pulls really hard. Thank God for diesel torque.

Other observations. On local roads, which are curvy, hilly, uphill / downhill etc., the ML drives pretty solidly considering its an offroader. I know that its no match against a BMW X5 on the road, but I do know that the M-Class always beat the X5 offroad. Body roll was heavy though, especially when you were taking corners a little too quickly. This hinted at the M-Class lack of sports appeal. Despite this, it never felt like you would loose control of the car. At higher speeds, the diesel noise became sufficiently louder and could be heard on the inside, but it was nothing that annoyed me as I could still hear the radio pretty clearly.

For someone who doesnt like this M-Class generation much, I have to say, Not bad. Not bad at all. Granted, it was a special edition model bearing the name of Final Edition, so I expected it to be the best M-Class of the W163 range. But overall, it drove pretty nicely. The only things I really didnt like was the cheap interior. The plastic used was a million times better than that used in other M-Classes, but it was still cheap looking and feeling. Still, an improvement over the regular M-Classes.

I can see why the ML270 CDI is the European favorite. It pulls nice and strong, is reasonably quiet, fuel-efficient (City: 18.8 mpg, Urban: 30.5 mpg, Total: 25 mpg) and was also the cheapest and most realistic offering of the M-Class range. Not having driven other M-Class variants, I can safely say that I would pick the ML270 CDI without a second though. ML350 (ML320)? No. ML500 (ML430)? Yuck. ML55 AMG? Totally pointless gas-guzzling POS. Even the ML400 CDI, a V8 turbodiesel variant of the M-Class, is overkill IMO. The ML270 CDI seems to be the most realistic real world option, especially in Europe. I expect its follower, the ML280 CDI (3.0 V6, 190-horsepower) to best the performance ratings of the outgoing ML270 CDI by a wide margin. Driving an SUV sure is a lot of fun, especially if its a diesel. Consider driving longer distances without stopping at every gas station. Now thats fun. Man do I feel sorry for the fools who purchased an ML500 or ML55 AMG.

Well, I really did enjoy this car even though I basically hate this M-Class generation. I still would never get one since the car still doesnt appeal to me, but this model wasnt as bad as I expected it to be. Thankfully, the new M-Class seems to be much more serious and tougher.

Up to 26 percent more output