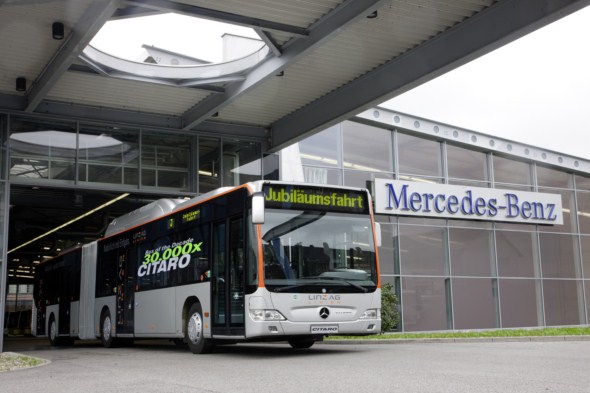 Stuttgart/Mannheim – After just twelve years in production, the 30,000th Mercedes-Benz Citaro has now been delivered. This unprecedented sales tally for an urban bus is testament to the overall success of a flexible modular system. On 25 August 2010 Michael Göpfarth, head of sales at the Mercedes-Benz Bus and Coach Unit of EvoBus GmbH, handed over the record-breaking vehicle to Walter Rathberger and Erich Haider, managing and executive directors of Linz Linien GmbH, at the Mannheim bus factory. In particular, Mr Göpfarth praised the Citaro’s ability to move with the times throughout its lifespan to date. “The Citaro has always been a trend-setter in the area of regular-service buses. Technical and design developments are continually incorporated into the production process. These lead to outstanding economy and reliability at the transport undertakings and offer passengers an attractive means of transport. The Citaro is able to accommodate virtually any conceivable wish among our customers.”

The majority of the 30,000 Citaros produced to date originate from the Mercedes-Benz bus factory in Mannheim, where the Citaro has been built since 1998. At the end of 2009, a workforce of 3530 was producing Mercedes-Benz urban and rural buses and touring coaches at the production facilities here covering a total of 141,000 square metres of floorspace.

Virtually no two Citaros are alike. This is attributable to the diverse range of variants and to the broad scope for individualisation. At the launch of production in 1988, the Citaro offered a range of urban and rural buses in different lengths and equipment variants, the diversity of which was unprecedented for low-floor regular-service buses. Today, the model range covers 28 different design variants. The spectrum extends from the compact Citaro K measuring 10.5 m in length to the four-axle, 19.54 m long CapaCity articulated large-capacity bus which is also based on the Citaro modular system. With this unique product range, the Citaro covers the entire transportation requirements of bus companies providing regular urban and rural public transport services.

The Citaro’s cutting-edge character and future viability are demonstrated by ongoing development of the diesel engine and highlighted in particular by spectacular vehicles featuring alternative drives. The Citaro G BlueTec Hybrid articulated bus will be produced in a small series in 2010. In parallel with the launch of this bus, the first urban buses with fuel-cell hybrid drives will also go into service. This Citaro FuelCELL hybrid points the way to the zero-emission drive of tomorrow.

Citaro: Bus of the Decade

The Citaro remains a shining example of cutting-edge design and innovation to this day. Its success is essentially accountable to its ability to reflect customers’ needs. The second generation of the Citaro was launched at the end of 2005/2006. A new axle design and a fully revamped “face” assured it of a warm reception from the outset. The Citaro has maintained its innovative drive right up to the present day – a virtue which is acknowledged not only by customers. Journalists, independent experts and above all drivers also appreciate its special attributes. It has won the ETM publishing company’s “Commercial vehicle of the year” readers’ award ten times, for example. Readers of the magazine “Busfahrer” voted it “Best bus of the year 2009”, it has scooped the Dekra environmental award and the F-Cell Award from the Baden-Württemberg environmental office. An international jury voted it “Bus of the Year 2007”.

In the context of the Bus Euro Test, the trade journal Omnibusrevue recently wrote: “The Mercedes-Benz Citaro provides the benchmark for the rest of the industry”. No other vehicle concept has such a defining influence on the bus market as the Citaro. It is without doubt the “Bus of the Decade”. 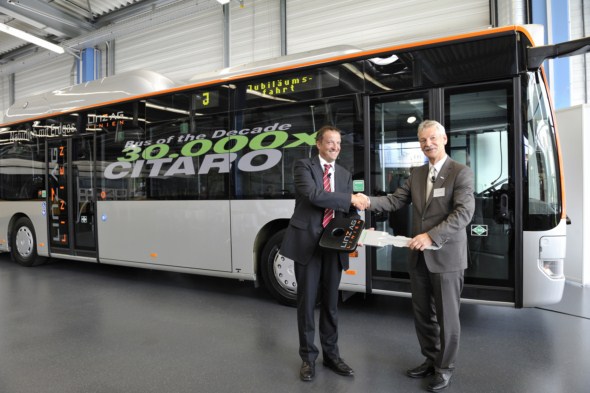 The 30,000th Citaro is an embodiment of the essential attributes to which the model range owes its success: flexible, cutting-edge, environmentally friendly and passenger-oriented. The Citaro G CNG sporting silver metallic paintwork offset with traffic orange is fitted with an environmentally friendly natural gas engine. The M 447 (h)LAG engine rated at 240 kW complies with the EEV (Enhanced Environmentally friendly Vehicle) emissions standard without a particulate filter. The voluntary EEV emissions standard defines the most stringent European emission levels at present, with limits set below those of the Euro 5 standard. Customers have been able to order the alternative CNG drive from the modular system for their Citaro ever since 1998.

The light and pleasant interior of the 4-door Citaro is equipped with an interior and door surveillance system. Two door cameras, at door 3 and door 4, relay the images to a TFT monitor at the driver’s workplace. This monitor also displays the image from the backup camera during reversing.  The driver’s entire workplace is separated from the passenger compartment by a driver’s cab. The overhead air conditioning system enables separate climate control for the driver’s workplace and the passenger compartment.

Bus-stop names are displayed on two 48.26 cm TFT monitors in the front and rear sections of the bus. The monitors are linked up to the IBIS on-board computer to display information on the route and the next bus stop. In addition to controlling the passenger information systems, IBIS is also responsible for influencing the light signalling systems. The operational control centre is able to transmit acoustic or visual messages directly to one or all vehicles on the line. The exact position of the vehicle is determined via GPS, evaluated and relayed to the passenger information panels at the bus stops. In this way, passengers are informed of exact arrival and departure times in real time at the bus stops.

Linz Linien GmbH is a company belonging to the Austrian Linz AG group. The transport undertaking handles an annual volume of almost 26 million passengers, operating 90 buses on 26 lines. In 2007 the company decided to replace its entire diesel-powered bus fleet with environmentally friendly and barrier-free Citaro natural gas buses. A total of 88 Citaro low-floor articulated and rigid buses are to be delivered by 2011. This decision by Linz Linien GmbH sent out signals beyond Austria’s borders. The 30,000th Citaro forms part of this order.

Linz Linien GmbH is currently the first transport company in Austria to test the series-production Citaro G BlueTec Hybrid. As an innovative, quiet and environmentally friendly vehicle concept, this hybrid vehicle fits the bill perfectly for Linz AG, which is incorporating new drives in all guises into its comprehensive mobility concept. Experts from Linz AG monitor the latest market trends with the aim of finding and deploying sustainable, lasting alternatives to fossil fuels for both public and private transport. The switch from diesel to gas buses was an initial step here in the area of public transport. Initial results with the Citaro G BlueTec Hybrid, based primarily on stretches covered on electric power only, have been positive.