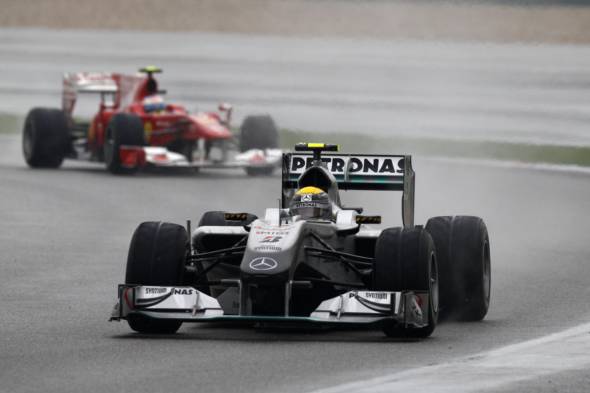 With the first four flyaway races completed, the Formula One calendar moves to Europe next weekend for Round Five of the 2010 World Championship. The Spanish Grand Prix takes place at the Circuit de Catalunya, located just outside of Barcelona, on Sunday 9 May.
NICO ROSBERG
“It’s a very nice feeling to be going into the European season with second place in the Drivers’ Championship and with a significant upgrade for our car in Barcelona next weekend. From talking to the guys at the factory, I know that they having been working really hard to get everything ready on time and it will be interesting to see the effect that the new developments have on the car. Barcelona is such a familiar circuit as we have tested there so often over the years that we should be able to spend the practice sessions just focusing on getting the most out of the upgrades. Returning to Europe is when the season feels like it really gets underway and we will be doing our best to continue our good run and podium finishes from the first four races. I’m looking forward to it!”
MICHAEL SCHUMACHER
“The European season is about to kick off and now we will see how our developments look in relation to those of the other teams. Every team will come to Barcelona with a revised car and so of course do we. I see a lot of potential here especially as our team has been reacting very well over the past four races. We have worked on general improvements to the car, as well as specific developments in downforce and efficiency, and I am confident that we have room to make further progress in the future.
Our step forward in Barcelona will be bigger than you can make at each race during the flyaways but it would not be realistic to expect us to suddenly be competing right at the front. I am hoping for a better race in Barcelona than I had in China and of course I would not mind having had better results so far. However the good news is that after three years away, I am feeling extremely motivated. So I am clearly ready to take this challenge.”
ROSS BRAWN
“The start of the European season is the first opportunity to make significant changes to the car and the Spanish Grand Prix will see the first step in our development programme for the MGP W01. In addition to a major aerodynamic and bodywork package, we have made changes to the wheelbase of the car which will help the overall handling and weight distribution. Michael will use a different chassis for Barcelona as we take the opportunity of having the cars back at the factory after the flyaway races to repair some damage to his original chassis.
He will switch to our first chassis which was previously used during the pre-season tests. Everyone at our factories in Brackley and Brixworth has worked extremely hard to ensure that the cars and our new developments are ready for Barcelona following the delayed return from China and we look forward to evaluating the impact on our pace whilst remaining conscious that this is very much a first step in improving our competitiveness.”
NORBERT HAUG
“The start of the European season in Barcelona will be a very important race to establish whether the competitive order of the field has changed as every top team will introduce technical upgrades. Our MGP W01 will have the first set of significant changes which will be followed by a defined rhythm of further upgrades, all of which are aimed at getting our car to the very top of the field. After the first four flyaway races in Bahrain, Australia, Malaysia and China, Nico is currently second in the Drivers’ World Championship which shows that he and our MERCEDES GP PETRONAS team have done a good job in the first fifth of the season getting the best results from the material available. Michael did not have such a good run, mostly without his fault, in the first four races. I am absolutely convinced that this will change sooner rather than later.”
Tags
barcelona f1