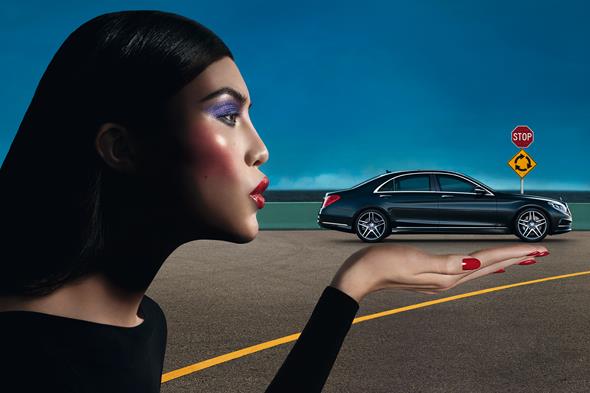 S-Class on all channels

Stuttgart. Mercedes-Benz is supporting the market launch of its new flagship with an extensive campaign covering all relevant communication channels. Under the banner “The new S-Class. Vision accomplished.”, the saloon is to be presented as the global benchmark for luxury motoring.In this way, the campaign will focus in a self-assured, confident manner on what the S-Class embodies as an icon of mobility: moving forward is about thinking on your feet and venturing down new avenues.

The worldwide 360-degree campaign will centre on print advertisements, a TV spot, an interactive web special and extensive social media activities. The Mercedes-Benz Museum will be supporting the campaign with an exclusive special exhibition dedicated to the history of the S-Class. 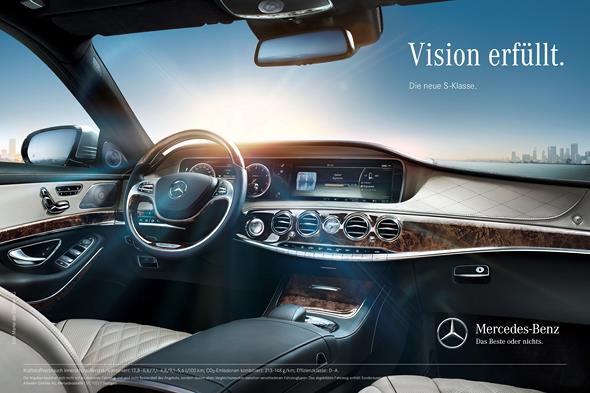 “The new S-Class embodies our leadership aspirations like no other model. It marks the beginning of a new era of modern luxury and safety in cars”, observes Dr Joachim Schmidt, Member of the Management Board of Mercedes-Benz Cars, Sales & Marketing. 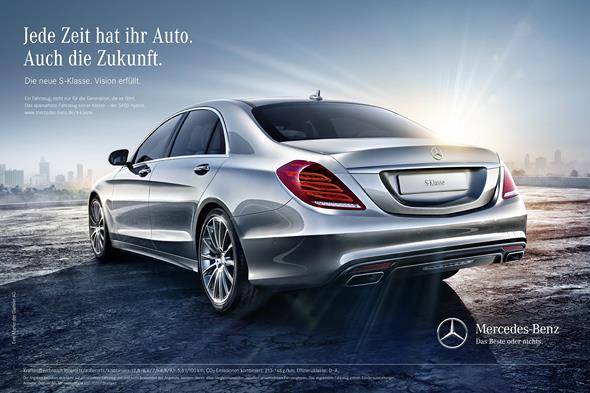 Self-assured and progressive in character, the campaign focuses on the unique image of the new S-Class and the numerous innovations it embodies. The Saloon is showcased in an early-morning setting, in which it is gently caressed by the first rays of the rising sun.

The look underscores the dawning of a new automotive age while at the same time emphasising the vehicle’s highly dynamic design in a sparse urban scenario. The four print motifs have been appearing in newspapers, magazines and national dailies since the end of June. 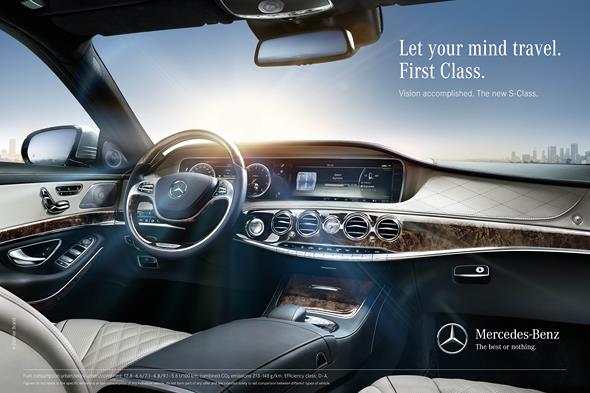 On TV, the S-Class will be presented as the best car in the world. The numerous innovative comfort and safety features, which will provide an all-new driving experience, will be at the heart of the “Visions” spot, which will be shown throughout Germany from July (http://youtu.be/K99Sg6IXkP0).

Mercedes-Benz had already successfully laid the foundations for the new campaign with a wide range of social media activities timed to coincide with the world premiere of the S-Class in May 2013. The teaser communication included design sketches and vehicle photos, followed by a live stream of the world premiere in Hamburg with wide-ranging reporting on Facebook and www.mercedes-benz.com. On its international Facebook page alone, Mercedes-Benz gained more than 18 million contacts, testimony to the enormous interest the social community shows in the new S-Class. 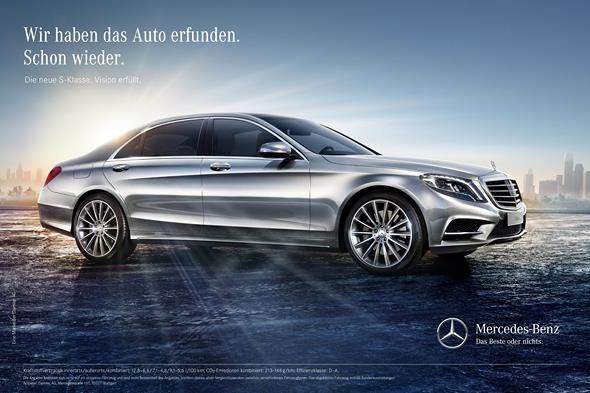 Interactive web special to bring the new S-Class to life

The interactive web special brings selected highlights of the new luxury saloon to life at www.mercedes-benz.com/s-class. These include the ENERGIZING massage function based on the hot stone principle, the PRE-SAFE® impulse assistance system, which reduces the risk of injury in a head-on collision, MAGIC BODY CONTROL, the world’s first suspension with “eyes”, and the internet-based and therefore particularly up-to-date Live Traffic Information service.

Visitors to the web special can download their “Management Summary” of the S-Class highlights in pdf format. The web special will be available as a desktop, tablet and smartphone version.

Communication on all channels around the globe

The classic advertising measures are to be supported by comprehensive CRM and retail marketing activities, for example, with the emphasis on directly targeting customers. Dealers will receive an extensive toolbox that will allow them to design and execute exclusive VIP customer events, which showcase the S-Class in an extraordinary setting in an elegant, timeless and emotional way. A special “Innovations” section has been integrated into the sales literature in order to highlight the numerous new technologies to best effect. 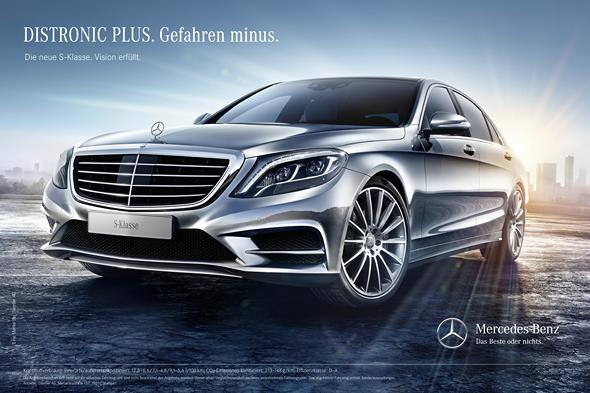 In view of the S-Class’s history as a technological trailblazer of automotive development, Mercedes-Benz Classic will be supporting the campaign with numerous activities. A brochure relates the luxury saloon’s history covering all the model series to date, for example, while a 2014 Classic calendar presents impressive motifs from various eras. 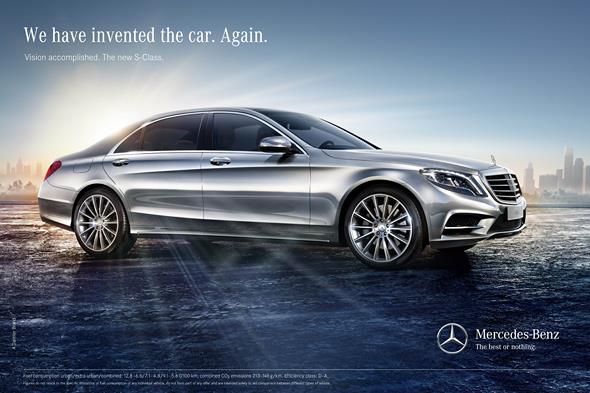 A special exhibition at the Mercedes-Benz Museum in Stuttgart from 18 June until 3 November 2013 will also pay tribute to the unique phenomenon of the S-Class. Numerous exhibits and accompanying information will present the S-Class family from the beginning of the 20th century to the present day.

The S-Class is also integrated into the sponsorship activities. It featured in the appearance by Mercedes-Benz and Mercedes-AMG at this year’s Cannes film festival, for example, and is currently starring alongside Chinese top model Sui He in the new key visual promoting Mercedes-Benz’s worldwide involvement in the fashion world. 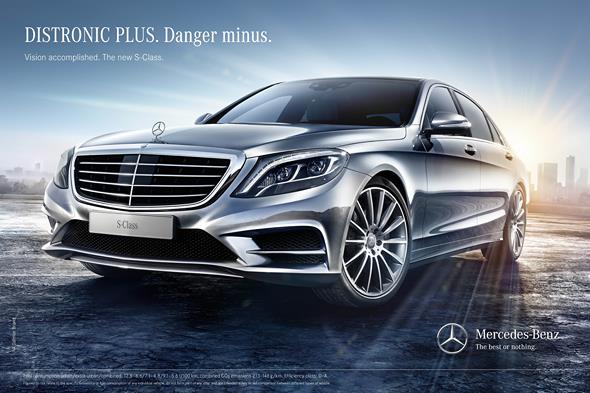 Under the creative direction of Carine Roitfeld, the former editor-in-chief of French VOGUE magazine, and art director Stephen Gan, among other things co-founder of the New York V Magazine, photographers Max von Gumppenberg and Patrick Bienert have created a visual motif with a beguiling, dynamic allure. An optical illusion illustrates a delightful interaction between car and model, with the viewer gaining the impression that Sui He is holding the S-Class tenderly on her hand, blowing it a kiss.

Mercedes-Benz’s creative agency Jung von Matt is responsible for designing and realising the marketing campaign. The web special has been produced by online agency Scholz & Volkmer. The new Mercedes-Benz S-Class will be available from dealers in Europe from 20 July 2013.

Family reunion for the Mercedes-Benz S-Class