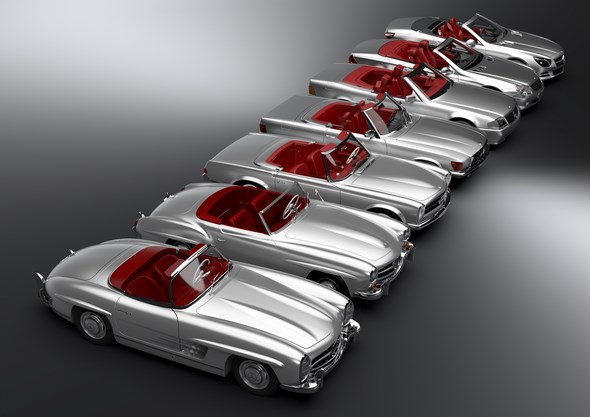 SL: A tradition of elegant sportiness

The Mercedes-Benz SL has enjoyed iconic sports car status for more than six decades now.The latest generation is to be launched in April 2016.

It is all set to transport the unique tradition of elegant sportiness into the future.

A characteristic feature of the Coupé was its gullwing doors – a direct consequence of the innovative space frame: they were cut deep into the roof, opening upwards to present a spectacle reminiscent of spread wings, which prompted the Americans to refer to the car as the “Gullwing”, while the French opted for “Papillon” (butterfly).

While the technical concept and key components derived from the competition vehicle, the W 198 boasted beautiful body lines and an even more powerful engine with efficiency-enhancing direct petrol injection.

This made it unique among the era’s series production sports cars. The 300 SL quickly became an automotive icon of the 1950s, winning major races along the way.

Both versions were absolute enthusiasts’ cars from the outset and are among the most sought-after and highest-priced classic vehicles today.

The 190 SL (W 121, 1955 to 1963) was presented together with the 300 SL “Gullwing” as a perfect addition to the portfolio: the body was closely related to that of the Gullwing, but designed as a two-seater convertible with a lowerable soft top.

The 190 SL (105 hp/77 kW) was specifically designed as a sporty yet comfortable touring vehicle.

The combination of sportiness and comfort became an innate part of the all-encompassing qualities of all subsequent SLs.

The Mercedes-Benz 230 SL replaced the 190 SL and 300 SL models in 1963.Its exterior featured clear, straight lines and the distinctive SL face with the large centrally positioned Mercedes star.

It came to be known as the “Pagoda” by virtue of its hard top:with its high windows, the roof supported on only narrow pillars exuded a lightness of touch which, in conjunction with its inward curve, was reminiscent of Far Eastern temples.

The Mercedes-Benz 230 SL (W 113, 1963 to 1971) was the first open-top vehicle to feature a safety body with rigid occupant cell and readily deformable front and rear segments – the so-called crumple zones – and was based on the Mercedes-Benz “Fin-Tail” saloons.

Apart from their elegance and quality, the vehicles also exuded safety – the open-top two-seater’s crash performance was way ahead of its time.

Although it was not originally planned to have such a long lifespan, this SL’s successful stint of 18 years marks an internal record which is unlikely to be broken: with the exception of the all-terrain vehicles of the G-Class, no other passenger car series has been produced over such a long period.

The brand hit the mark once again with this vehicle: production capacities were soon exhausted, giving rise to waiting periods of several years.

Integral elements of the concept were automatic, sensor-controlled rollbars which shot up into position within 0.3 seconds when the vehicle threatened to overturn and integral seats which were able to withstand forces far in excess of those which might occur in a collision.

For the first time, this made it possible to have an open-top vehicle and a coupé in one – the transformation was completed within 16 seconds.

The body design combined tradition and progress by way of striking details. The highlighted air openings in the front wings cited a typical feature of the 300 SL from the 1950s, for example.

The narrow, wing-type profiles on these side air openings – which experts referred to as “fins” – were also reminiscent of the W 198. With a totally new safety concept, the SL of the R 230 model series clearly surpassed the standards which had applied up to this time.

The Active Body Control suspension (ABC) was available for the first time on an SL.

The most recent SL model series (R 231) has been available since 2012. The new generation featuring a technical and visual facelift is to be launched in April 2016, sporting an even more dynamic design.

In evolving the radiator grille, for example, the designers have drawn inspiration from the SL’s earliest forebears.

The soft top, which can now be operated at up to 40 km/h, and the automatic boot separator are additional amenities which further enhance the convenient user-friendliness of this luxury sports car.