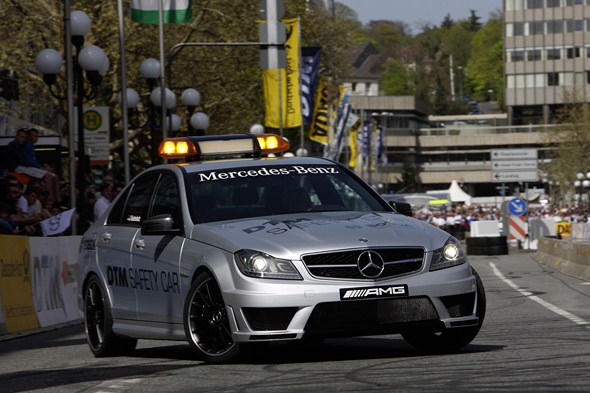 Affalterbach – The new C 63 AMG is being used as the Safety Car for the 2011 DTM season. Following the DTM presentation in Wiesbaden on 10 April 2011, the new Safety Car will make its debut on 1 May 2011 at the opening race of the German Touring Car Masters season at the Hockenheimring in Baden-Württemberg. The V8 Sports Saloon only had to be modified slightly for its demanding DTM task. Responsibility for development and production of the C 63 AMG Safety Car was entrusted to the specialists in the AMG Overall Vehicle Development department and the AMG Performance Studio.

Decisions regarding the deployment of the Safety Car are taken by the Deutsche Motorsportbund (DMSB) – German motor racing’s governing body – which assumes responsibility for safety implementation and compliance as well as performing official sports functions in accordance with the DTM regulations. 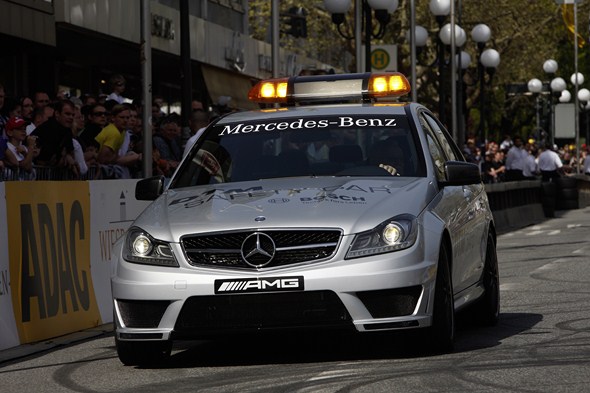 Piloted by racing driver Jürgen Kastenholz (43), the C 63 AMG Safety Car has the job of ensuring maximum safety for the racing drivers and spectators in the event of dangerous situations such as extreme weather conditions, accidents or other incidents. When radioed by Race Control, the Safety Car positions itself at the head of the DTM field and leads the cars around the circuit until normal racing can be resumed. 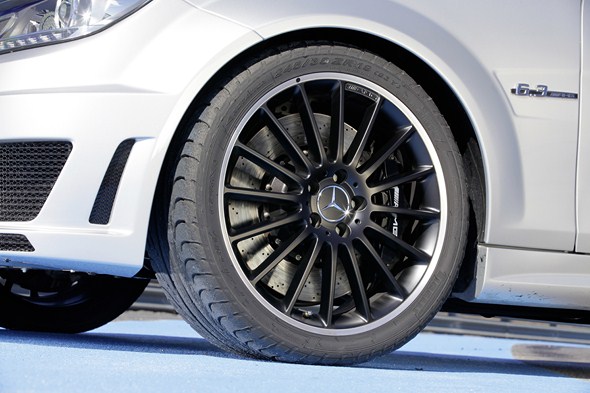 The new C 63 AMG being used for the 2011 DTM season scales new heights in terms of design and technology: the AMG 6.3-litre V8 engine has an exceptionally high output of 358 kW (487 hp) and a peak torque of 600 Nm. The increase in output versus the standard 336 kW (457 hp) engine is due to the AMG Performance Package, which is optionally available for any C 63 AMG model and enables the car to accelerate from 0 to 100 km/h in 4.3 seconds (Estate 4.4 seconds). 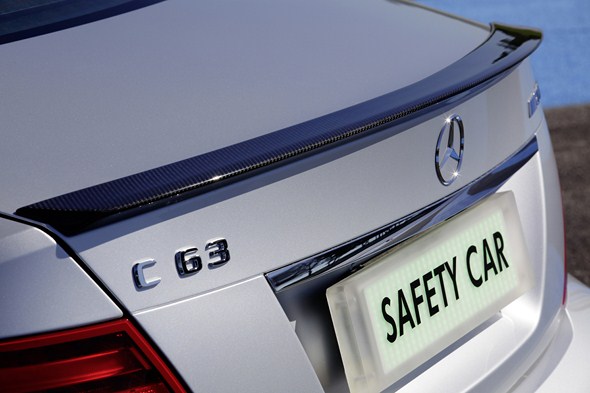 For the AMG Performance Package the engine specialists have placed their trust in a technology transfer from the Mercedes-Benz SLS AMG: the forged pistons, connecting rods and lightweight crankshaft have been adopted from the gull-wing model. The lower inertia of the three-kilogram lighter components allows the naturally aspirated eight-cylinder engine to rev freely and respond even more promptly. Distinguishing features of the Performance Package include the variable intake manifold painted in titanium grey and the AMG high-performance braking system with compound brake discs at the front axle. 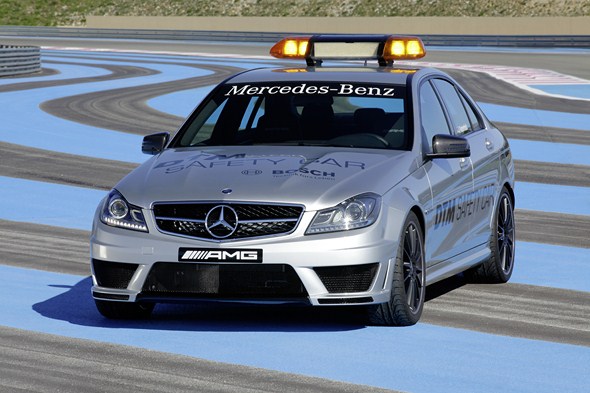 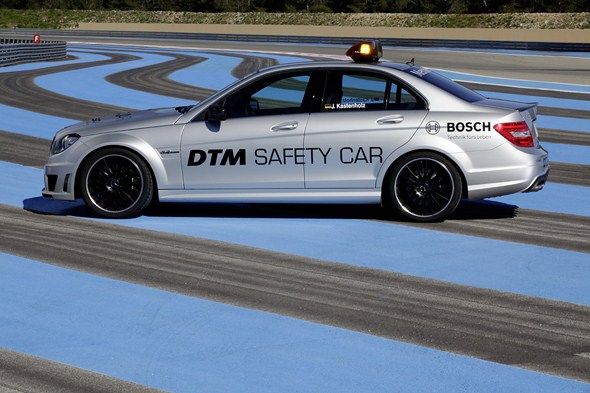 Distinguishing features of the current model include the aluminium bonnet with modified powerdomes, the new radiator grille, the new headlamps, the new AMG rear apron with a distinctive black diffuser insert and active rear-axle cooling. To optimise radiator inflow, the AMG front apron on the DTM Safety Car features enlarged openings and side air outlets, while the AMG carbon-fibre spoiler lip on the boot lid reduces lift at high track speeds. In keeping with this design, the DTM Safety Car also sports AMG carbon-fibre exterior mirrors.

Outstanding grip thanks to differential lock and 3-stage ESP®

The adjustable coil-over suspension together with the differential lock and the 3-stage ESP® ensures a high level of agility and outstanding grip on the race track. The C 63 AMG Safety Car is shod with multi-spoke AMG light-alloy wheels painted in matt black with a high-sheen rim flange, 235/35 R 19 front tyres and 255/30 R 19 rear tyres. 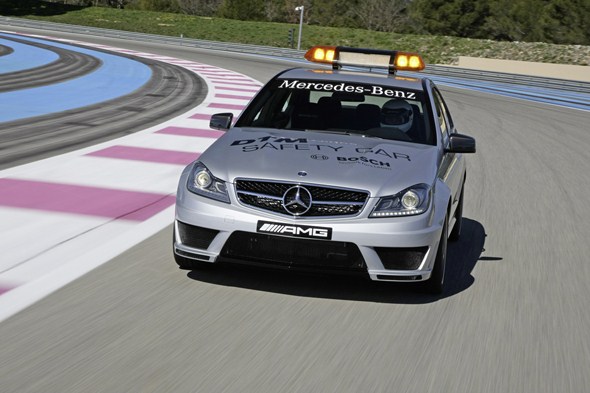 The AMG high-performance braking system has been optimised for the race track: compound brake discs with six-piston brake callipers at the front axle and steel brake discs with four-piston brake callipers at the rear axle; all of the discs are internally ventilated and perforated. Meanwhile, the AMG sports exhaust system with special rear silencers produces an unmistakable AMG
V8 sound.

Distinguishing features of the DTM Safety Car compared to the standard C 63 AMG include distinctive DTM Safety Car logos, the LED light bar on the roof and the stroboscopic flashing LED lights at the front and rear. A number plate illuminated with LEDs and the words “Safety Car” on the boot lid make the car easier to see in poor weather conditions. 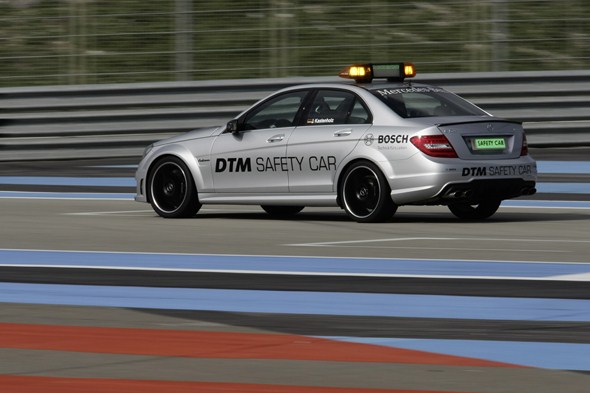 DTM Safety Car from Mercedes-AMG since 2000

Mercedes-AMG has provided the Safety Car ever since the “new” DTM’s inception in 2000 and alternates with Audi from race to race. The flagship V8 C-Class model from AMG has been used in DTM since its launch in 2008. To help ensure safety on the race track in the Formula-1 World Championship, the SLS AMG is used as the Official F1TM Safety Car, while the Official F1TM Medical Car is a C 63 AMG Estate.

THIS is Geländewagen ... NOT!