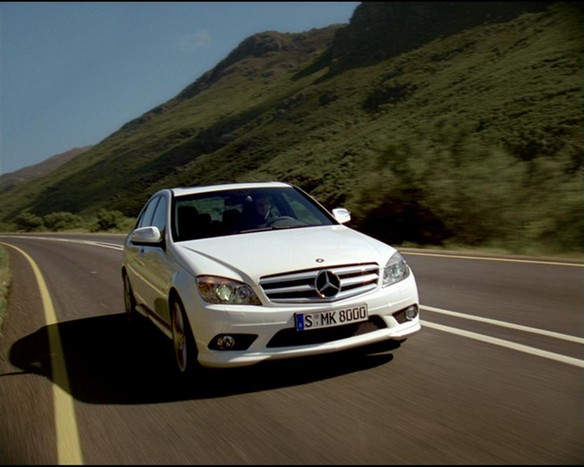 Mercedes-Benz is starting a comprehensive integrated marketing campaign for the new C-Class, which will be introduced to the market on March 31, 2007. Using the slogan C-for Yourself, the brand with the star is conducting a variety of communication activities via several channels to support the sales launch of its highest-volume model series.The primary goal of the campaign is to convince customers around the world of the advantages of the versatile product concept behind the new C-Class sedan, including two distinct front-end designs and outstanding comfort, agility and safety.
Our objective for this campaign is to motivate customers to experience for themselves the superior driving culture offered by the new C-Class, says Dr. Olaf Guttgens, Vice President Brand Communications Mercedes-Benz Passenger Cars. All communication measures for the C-Class are therefore geared toward direct contact with our customers and potential buyers. Along with our tried advertising methods, we will also be focusing strongly on various forms of direct communi-cation for the C-Class, to be implemented at exclusive driving events. These measures will be accompanied by a C-Class Mobile Marketing Special, a presen-tation within Second Life and interactive films on the Internet innovative platforms that will enable us to reach existing and potential customers of our brand in a targeted manner. 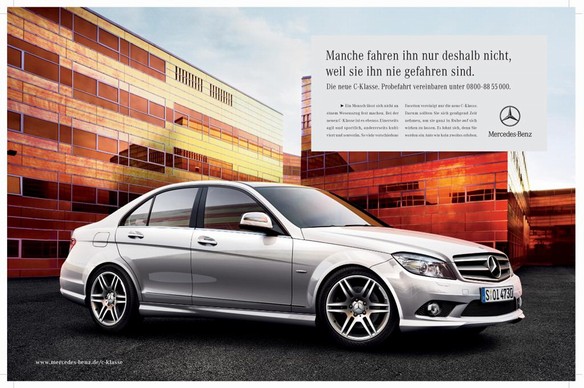 The integrated campaign for the new C-Class was developed by BBDO France  following a pitch conducted with several markets – and is adapted to the requirements of the international markets. In Germany, the new lead agency Jung von Matt is carrying out the campaign for Mercedes-Benz with the slogan C-for Yourself.

The C-Class campaign will move into high gear on April 2, 2007, with the launch of advertisements in magazines and newspapers with high circulations. Like most of the other communication measures, the print ads, which invite customers to test-drive the sedan, feature a white C-Class Avantgarde model equipped with the AMG sports package. A 30-/40-second television commercial, to be broadcast on all public and commercial stations in Germany with high circulations, will feature the current Formula 1 world champion race car driver Fernando Alonso enthusiastically describing the outstanding handling qualities of the new C-Class. At the end of the commercial, Alonso, who drives for the Vodafone McLaren Mercedes Formula 1 team, symbolically hands over the keys to a new C-Class to the audience at home, thus inviting them to test-drive the vehicle and see what the sedan has to offer. This theme of handing over the keys is repeated as a motivating element in many components of the campaign. In the German market, the primary C-Class campaign will be supplemented by extensive retail marketing measures, radio commercials, outdoor ads and stadium advertising at soccer matches of the German national team.

A particularly extensive and entertaining element of the international campaign is the online presentation at www.mercedes-benz.com/c-class. On the site, which Mercedes-Benz also advertises by banners on the Internet, customers and anyone else interested in the C-Class can view the vehicle as displayed against realistic backdrops and then configure it and study the results from various perspectives. The software allows users to select according to their personal tastes any combination of the models equipment lines, numerous color options, different types of light-alloy wheels, interior designs and selected optional features. The website also features an interactive assistant who guides users through the new 360-degree soft configurator. Several interactive films are available as well that show various individuals describing the most important details of the new C-Class as they take the vehicle out for a drive.

With the new C-Class campaign, Mercedes-Benz continues to address existing and potential customers in the spirit of its core brand value of Appreciation. Direct communication is therefore a key element of a package of measures geared toward very personalized interaction with customers. To this end, customer events like the Exclusive Driving Experience in Barcelona and various partnership agreements with European hotel chains in popular vacation regions will offer customers and potential buyers the opportunity to individually test-drive the new C-Class in a relaxed atmosphere. 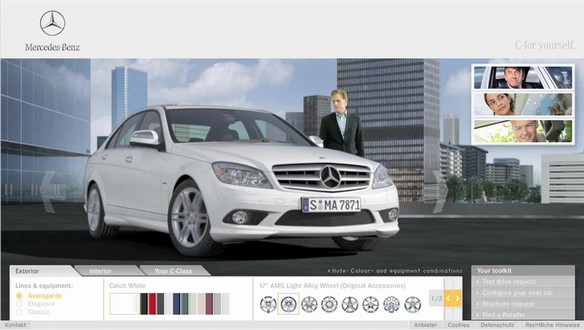 The Exclusive Driving Experience (April 1-3, 2007) will allow some 80 consumers from all over Europe to experience the C-Class in an especially attractive environment. In Barcelona participants at the event will be able to enjoy the exciting flair of the Catalonian capital. They will also take part in a slalom competition with production vehicles that will enable them to discover for themselves the outstanding comfort and agility of the new C-Class, as well as its safety features, which are unique in this segment. Participants will also visit the Circuit de Catalunya, where they will be able to drive an offroad course and go for taxi rides in a C-Class DTM model with Mercedes-Benz DTM drivers Bruno Spengler, Mathias Lauda and Bernd Schneider. On the evening of April 1, 2007, the guests in Barcelona will attend the Laureus Welcome Party for the Laureus World Sports Awards. King Juan Carlos of Spain and founding partner Mercedes-Benz are the patrons of the event, which honors top international athletes on April 2, 2007.

Vacationers who stay at selected Robinson Club Resorts and Westin Hotels & Resorts facilities in Germany, Austria, Scotland, Italy, Spain, Portugal and Greece between May and September 2007 can expect a completely new driving experience, as they will have the opportunity to test-drive the new C-Class in a relaxing atmosphere. Their drives will take them across beautiful and exciting routes as they learn to appreciate the superior quality and agility of the new model. Mercedes-Benz will also be offering people at premium shopping malls, such as the one in Metzingen, Germany, the opportunity to take spontaneous test drives during April and May 2007. And as was the case with the successful introduction of the new-generation E-Class in the summer of 2006 customers interested in the new C-Class will be able to experience it at selected non-automotive trade fairs that cover the areas of lifestyle, design and interior decorating such as Maison & Objets in Paris, France (September 7-11, 2007).

The new model will also be demonstrating its superior culture of driving at the German Touring Car Masters series (DTM), starting on April 22, 2007. This years DTM features four AMG Mercedes C-Class vehicles from the new model series. The C-Class with its former models is already the most successful vehicle in the DTM today. Fans who attend DTM races at Hockenheimring and Lausitzring as well as DTM and the Formula 1 races at Nürburgring will be able to experience the new C-Class up close by riding in the DTM racing taxi or participating in driver-safety training sessions and various test drives.

For the first time ever, Mercedes-Benz offers an innovative Mobile Special to attract the attention of customers and potential buyers while they are on the move. Special mobile client software can be called up either by text messaging (SMS) a number assigned to each country (for example in Germany, via an SMS marked cklasse to 88044) or directly from the Mercedes-Benz website in the participating markets. Those who access the software receive images of the new C-Class interior and exterior, and are also provided with technical data. They can then utilize the soft configurator to put together their dream car on the basis of various model versions, colors and wheel rims. The Mobile Special also contains the dates of C-Class events and invitations to them, as well as films, photos and engine sounds that can be downloaded. Mercedes-Benz is advertising the Special on Vodafone Live and other mobile portals. Beginning in mid-March, ten white C-Class models will travel across Europe, starting in Bremen, Germany, and then moving through the Netherlands, Belgium, Switzerland, Italy and France to Barcelona for the Laureus World Sports Awards. The white sedans will highlight the Mobile Special in numerous cities during their European tour. The C-Class Mobile Special is available as a Java application that runs on more than 30 of the most commonly used mobile terminals, and in a simpler WAP-version for cell phones that are not Java-enabled.

Since the C-Class does not only generate excitement in real life, the new Avantgarde model with the AMG package has started to become available on March 16, 2007, in Mercedes-Benz virtual representation at Second Life (www.secondlife.com coordinates 128.128.11). All residents of this online world can purchase a virtual model of the C-Class for 1,500 Linden Dollars (approx. four Euros) or virtually test-drive it on a challenging track. Tens of thousands of people from all over the world have visited the Mercedes-Benz island since its opening on February 20, 2007, and the site is one of the most frequently visited corporate presentations in Second Life (www.mercedes-benz.com/secondlife).