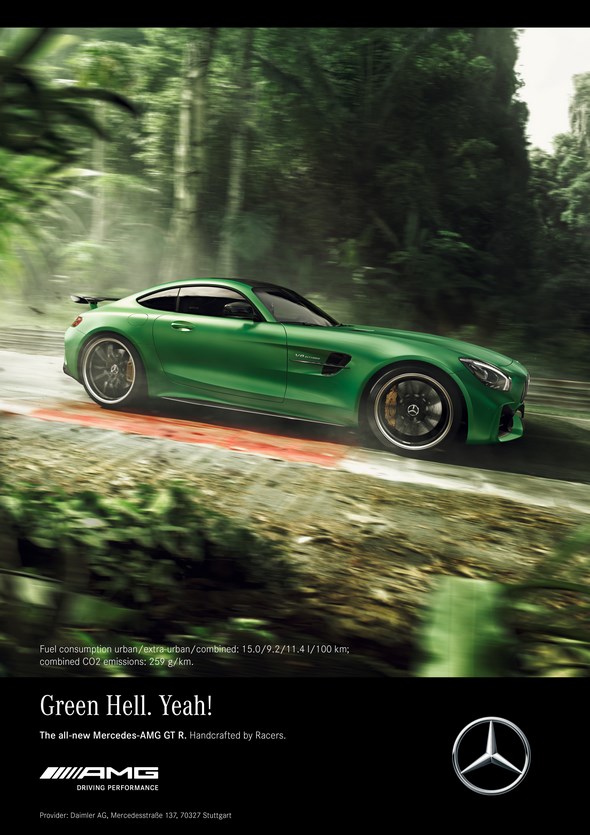 Lewis Hamilton tames the beast of the “Green Hell”

Mercedes-AMG is launching a special high-profile campaign to coincide with the world premiere of the new Mercedes-AMG GT R sports car on 24 June 2016 in Brooklands, UK at the Goodwood Festival of Speed.

Under the motto “Beast of the Green Hell”, the new AMG GT R trembles the “Green Hell” of the Nürburgring and nobody less than reigning F1 world champion Lewis Hamilton is up to the task of taming the beast.

The campaign focuses on two commercials that tell the story of how the beast is tamed. The matching soundtrack comes courtesy of Linkin Park with the song “Papercut”.

Painted in aggressively provocative “AMG green hell magno”, the new Mercedes-AMG GT R demonstrates that it is more than a sports car. It’s a racing car that has been approved for use on the road. 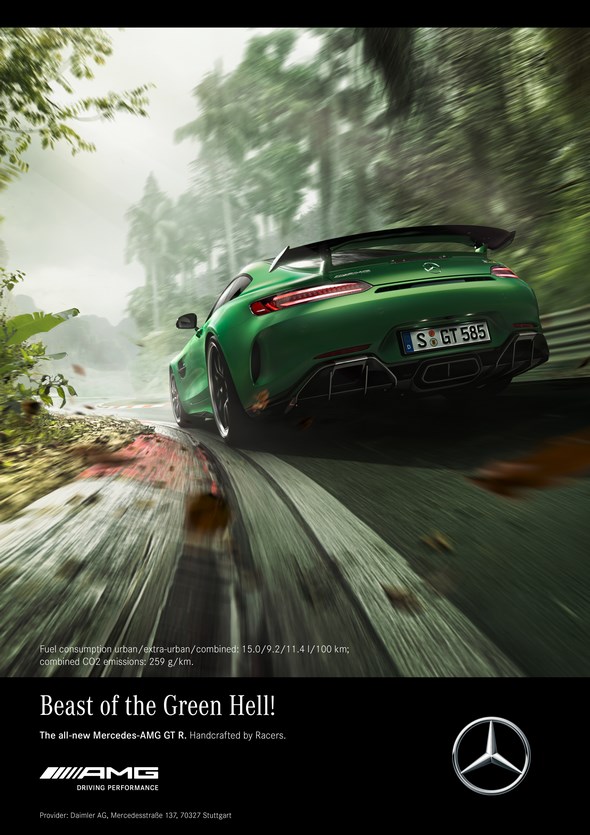 The Mercedes-AMG campaign was created in cooperation with one of the world’s most iconic race circuits, the Nürburgring Nordschleife, also known as “Green Hell”.

“With the Mercedes-AMG GT R, we’re extending our GT family with a new top model. We have never put so much technology and material expertise into a series car.

So to speak, the AMG GT R descends from the “Green Hell” of the Nürburgring. Therefore, the race track as its ‘natural environment’ plays a crucial role in the commercial”, says Tobias Moers, Chairman of the Board of Management of Mercedes-AMG.

And three-time Formula One world champion Lewis Hamilton adds: „For me a street-legal sportscar needs to have muscle, power, agility, speed, balance and ride.

It has to have edgy elegance and it’s got to be sexy. When I first saw the AMG GT R I was just like: ‘why aren’t all cars like this?’”

With its launch in March 2017, the new AMG GT R will be granted approval for use on the road. Until then, the campaign will supply videos, photos and information for all those who are interested as well as for the worldwide AMG fan community.

The beast left its first marks at the 24-Hour Race on the Nürburgring from May 26 to 29 2016, with green tyre marks and messages on the asphalt attracting attention and arousing curiosity.

The Mercedes-AMG GT R marked out its traditional territory for the first time. The campaign was extended with viral photos and videos on social networks.

For example, they show the night watchman at the Nürburgring hearing unfamiliar engine noises in the forest at night and finding mysterious green tyre marks on the race track.

On the online channels of the Nürburgring, visitors to the 24-Hour Race were likewise able to go in search of the beast and upload marks at hashtag #beastofthegreenhell, for what they could win attractive prizes.

The first of the two spots, which has been running since 17 June 2016, indicates who left the marks. The spot can be viewed as a teaser on a variety of online channels: http://mb4.me/beastofthegreenhell_teaser. It shows Lewis Hamilton going on a jungle expedition in search of the beast in a quest to tame it. 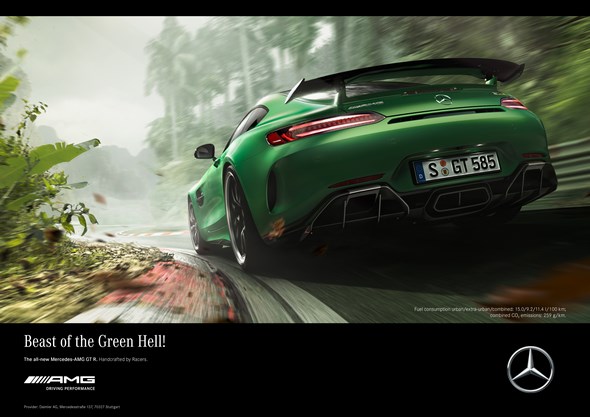 Viewers see him in the middle of the dense rainforest, surrounded by mist and exotic creatures. The mood is dark and slightly scary, with the expedition team seemingly tense.

Suddenly, one of the team members stops and brushes aside the leaves from the forest floor with his hands. What the confused men find is not earth, but parts of a race track.

Just then, a loud noise attracts Hamilton’s attention. Out of the dense overgrowth, there comes a growl, which increasingly grows into a roar – the beast.

Impressive images of how the beast is tamed are provided by the second spot, which is available on social media in time for the world premiere and follows on the content of the teaser video: ttp://mb4.me/beastofthegreenhell.

Finally, he comes to an abrupt stop. The engine howls one last time, and then Hamilton presses the start/stop button. It suddenly becomes clear that the jungle is the “Green Hell” of the Nürburgring.

Hamilton is in the pit lane in the AMG GT R and reviews what he has just experienced. It was too good to get out of the vehicle. So he starts the engine again, accelerates onto the track and disappears into the jungle.

The spot ends with a scene in the city. Lewis Hamilton leaves a restaurant accompanied by a female and gets into his AMG GT R. As the motor starts, a smile crosses his face. The “Green Hell” is back.

The films were made in the jungle in Thailand, at Lake Como and in the “Green Hell” of the Nürburgring. The campaign also includes various advertising motifs and a toolbox that includes CRM and retail activities in addition to the motifs.

In the next months, a web special presents in detail the AMG GT R’s impressive technology, in line with the Mercedes-AMG GT claim “Handcrafted by Racers”.

The web special with all the photos, films and further information on the vehicle is available at www.mercedes-amg.com/webspecial/beastofthegreenhell/.

The campaign can be seen on the digital platforms of Mercedes-AMG, Mercedes-Benz, MERCEDES AMG PETRONAS Formula 1, Lewis Hamilton and Linkin Park. 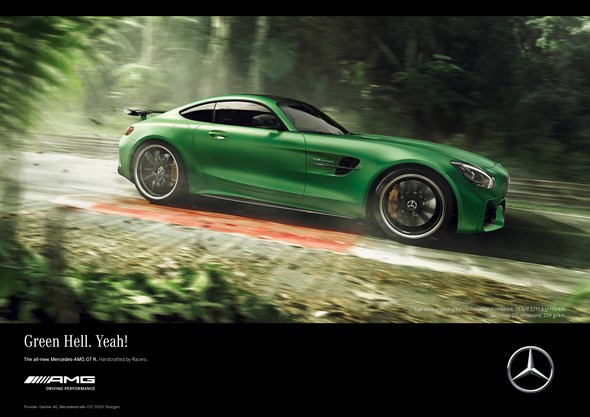 The campaign for the new AMG GT R is also the first result of cooperation between Mercedes-AMG and Linkin Park. In future, both partners wish to pool their creative potential for special occasions and projects.

The Californian rock band and the sports car maker from Affalterbach share a passion for supreme performance and perfection, both on the road and on the stage.

So the sound of Linkin Park provides the perfect musical setting for the launch of the AMG GT R. With the song “Papercut” from the album “Hybrid Theory” released in 2001, the self-confessed car and AMG enthusiasts are supporting the campaign for the youngest member of the Mercedes-AMG family.

Study of an ultra-stylish luxury-class coupé