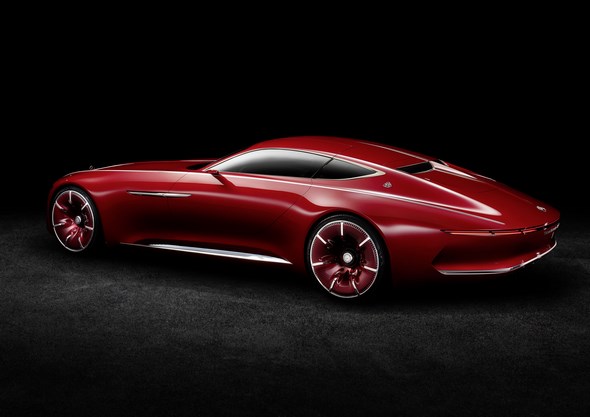 The ultimate in luxury: Vision Mercedes-Maybach 6

Stuttgart/Pebble Beach.  Every August classic car fans from around the world converge on Pebble Beach in California for a very special beauty contest.

This gathering of magnificent classic cars is the perfect place to premiere the exclusive Vision Mercedes-Maybach 6, a sensational luxury-class coupé.

The 2+2‑seater is a homage to the glorious age of the aero coupés and consciously carries this tradition forward into the future. 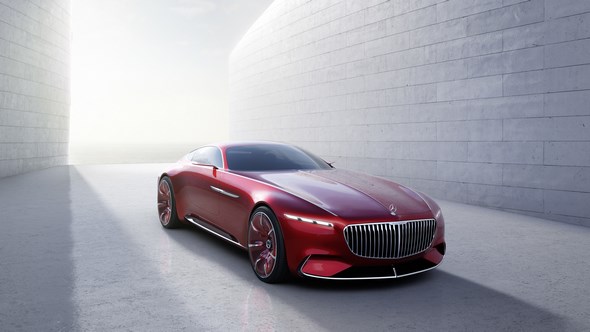 The Vision Mercedes-Maybach 6, which measures almost six metres in length, is designed as an electric car. The drive system has an output of 550 kW (750 hp).

The large coupé is set to make its debut at Monterey Car Week, which will take place on the Monterey Peninsula between 16 and 21 August 2016. The final event on 21 August will be the Pebble Beach Concours D’Elégance.

With its sensual, emotional design (“hot”) and intelligent details (“cool”), the Vision Mercedes-Maybach 6 represents the ultimate in luxury.

The classic aesthetic proportions of the show car – the extremely long bonnet, the low roof line and the rearward positioning of the greenhouse – recall the aero coupés of days gone by.

But this is not retro design – this is a reinterpretation of classic, aesthetic principles.

At the same time the design is something unexpectedly new – cool, technoid and reduced. This is exemplified by the aerodynamically intelligent basic shape. 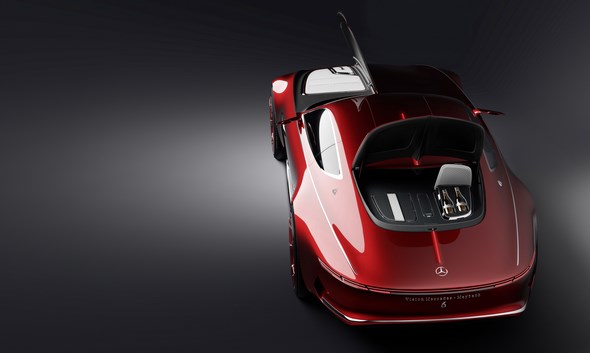 Even without aids such as spoilers, the airflow hugs the contours of the vehicle body and only breaks away very late at the tail end of the vehicle.

Then there is the surprisingly technoid character of the narrow lights, the partially transparent rims and the split rear window.

“Our glamorous coupé, the Vision Mercedes-Maybach 6, represents the ultimate in contemporary luxury. It is hot and cool”, states Gorden Wagener, Head of Design at Daimler AG.

“With its intelligent appeal and reduced, technoid look, it perfectly embodies our design philosophy of sensual purity and our pursuit of aerodynamic efficiency”. 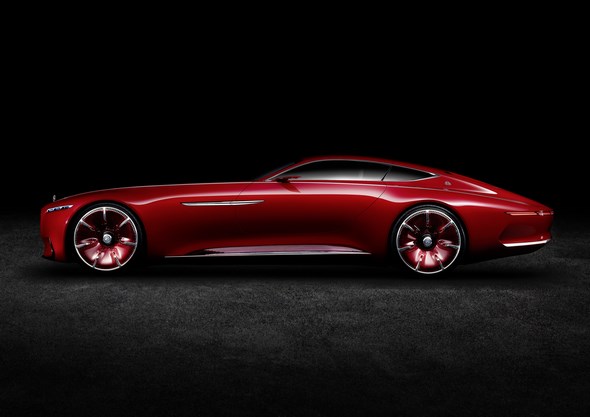 Clearly defined contours and organically formed wings stand in contrast to the sharply drawn, extended feature line on each side which defines the upper vehicle body from the radiator grille across the entire length of the vehicle to the rear.

Below this, the main body has a bulging, muscular look, extending across the entire flank. There is also a striking contrast between the Maybach red paintwork and the chrome strips which sit above the wheel arches and in the centre of the bonnet and boot lid. 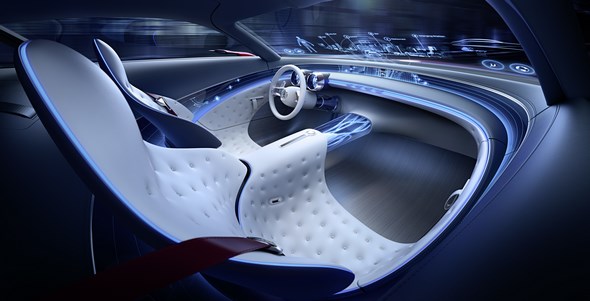 A reinterpretation of the Mercedes-Maybach radiator grille with its fine, vertical struts accentuates the front end. The grille was inspired by a pinstriped suit.

The radiator grille rests on two aerodynamically shaped supports on the outer right and left of the bumper.

The distinctive 24-inch wheels are a development of the aero rim from the Concept IAA (Intelligent Aerodynamic Automobile). A transparent shield in the vehicle colour provides a view of the aluminium spokes behind it.

A further highlight is provided by the gullwing doors, a hallmark Mercedes design element which has been brought up to date. 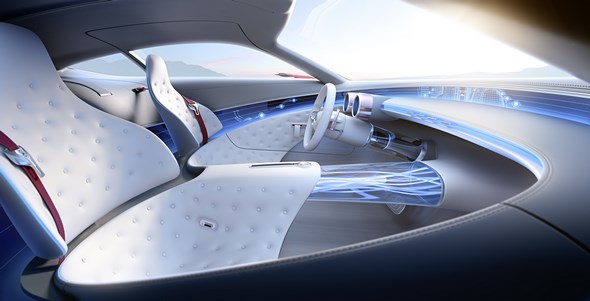 They underline the sporty character of the vehicle’s silhouette and feature innovatively designed aluminium trim. The exterior mirrors designed as cameras are supported on the wings.

The extended, round “boat tail” format of the Vision Mercedes-Maybach 6’s rear recalls a luxury yacht, and narrow tail lights which emphasise the width of the vehicle are integrated in its outer edges.

Above this sit the two extremely shallow rear windows (“split window”). Further distinctive features at the rear include the diffuser with aluminium frame and the air outlets behind the wheel arches. 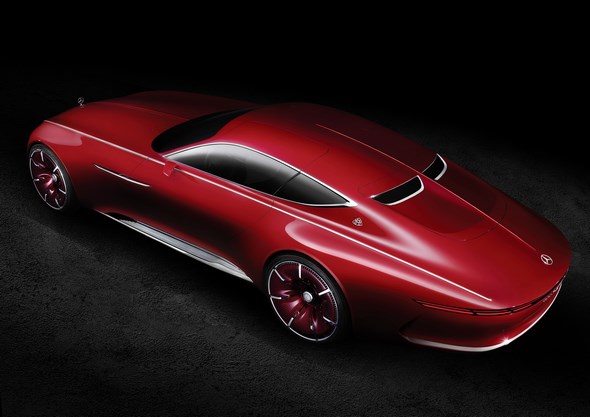 The interior of the Vision Mercedes-Maybach 6 is a synthesis of intelligence and emotion and combines traditional Mercedes-Benz values with a new high-tech experience.

The dashboard wing curves across the door trim into the seat landscape, creating a 360° lounge. The new “inside out” spatial design adds a particular touch of finesse.

The sitting surface forms a horizontal, which transitions into the vertical of the doors and finally becomes the underside of the dashboard wing.

In addition to the flowing contours, the material composition produces a luxury experience of the highest order. Authentic materials and colours such as rose gold are used to create luxurious accents. 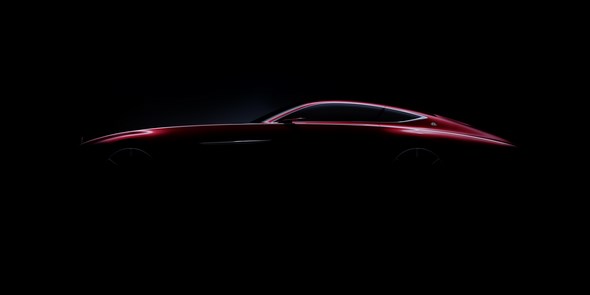 The interior, with its high-quality leather trim, has a cool colour scheme which perfectly underlines the digital innovations. The sitting surfaces have a Chesterfield look.

In the doors and dashboard the traditional wood trim softens the appearance of the digital control and display interfaces.

As a contrast to the digital world of the displays, elm is used in the floor area, creating a refined yachting look. Elm is the palest open-pore wood which Mercedes-Benz is currently working on for series use.

In the front luggage area of the Vision Mercedes-Maybach 6 is a set of two suitcases, exclusively created for the vehicle.

Here too the designers have followed the sensual, pure design idiom of Mercedes-Benz. Plenty of space has also been provided for further additions such as picnic accessories or personal items. 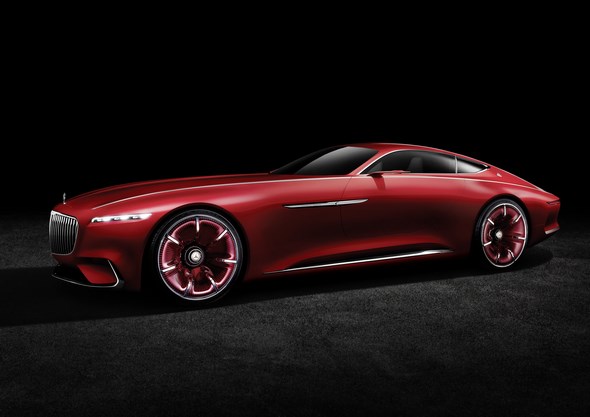 Dipping into the future: a fusion of analogue and digital experience

Ever since Mercedes-Benz invented the car 130 years ago, driving has been a source of enjoyment and delight. With the increase in digitisation comes a simultaneous need for sustainable analogue solutions, the design of which has been emphasised and in places exaggerated in the concept car.

In the Vision Mercedes-Maybach 6 this can be seen above all in the “hyperanalogue” instruments with needles and circular, crystal-look displays.

The classic circular instruments are combined with deep displays and act as a reference to the unique history of Mercedes-Benz. In contrast, other display elements are digitally integrated into a continuous glass trim part. Information about the seat, for example, can be shown on this digital strip. 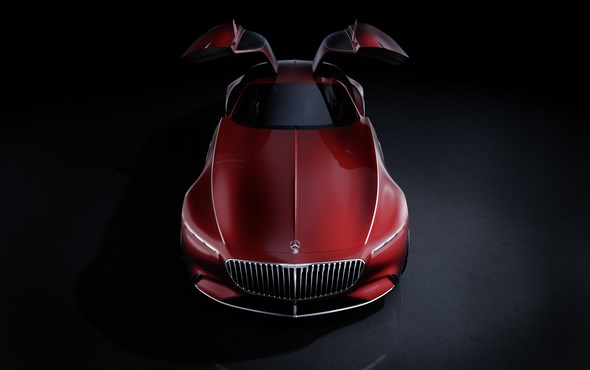 Map information is also shown in the front area of the strip. Menu content is extended along a digital line which extends to the sides as far as the occupants, who can set their own content ergonomically using touch control.

The front windscreen serves as a transparent display: driving-related data and geographical information is shown across its full width, augmenting the outside world with additional information.

This information can be controlled and adjusted by the occupants using gestures.

The luxury padded leather upholstery is a particular highlight. Its traditional look is combined with future technology here – the buttons which would normally be trimmed in leather have been replaced in the upholstered surfaces by miniature “body sensor displays”. 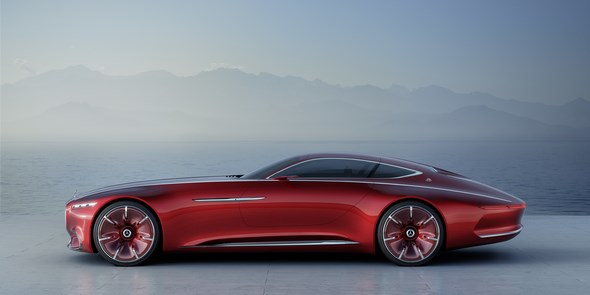 The sensors embedded in the upholstery also record the incidence of light, the colour of the occupant’s clothing and the ambient temperature.

This information can be used to trigger new, emotional lighting effects in the interior.

The concept car aims to embody the ultimate in luxury, and this is underlined by the fact that the driver can switch to digital/autonomous mode.

Another highlight is offered by the floating, transparent centre tunnel, which visualises the drive system’s electrical energy flow for the occupants. 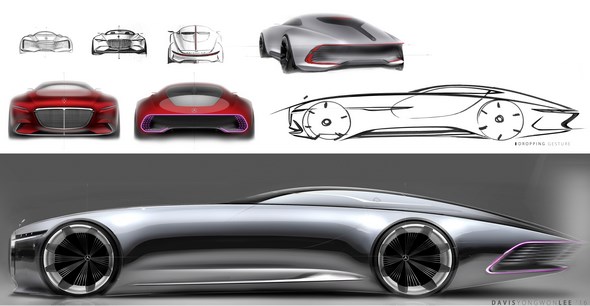 The side sills, illuminated by LED light strips, clearly underline the fact that the Vision Mercedes-Maybach 6 is designed as an electric car.

Thanks to its four compact permanent magnet synchronous electric motors, it features all-wheel drive. The output of the drive system is 550 kW (750 hp).

The shallow underfloor battery has a usable capacity of approx. 80 kWh. This not only allows performance characteristics typical of a sports car (acceleration from 0‑100 km/h in under four seconds, top speed electronically governed at 250 km/h) but also a range of over 500 kilometres according to the NEDC (over 200 miles according to EPA). 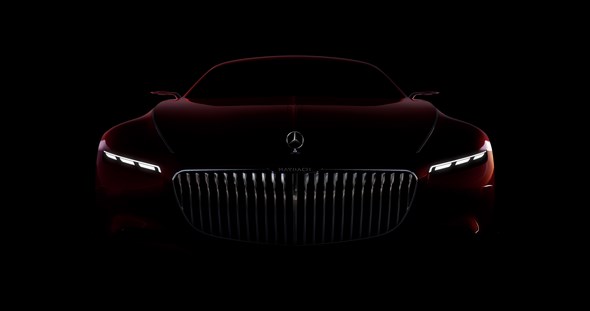 Vision: add an extra 100 kilometres to the range in just five minutes

The quick-charge function is also visionary: as a result of DC charging based on the CCS standard, the system allows an impressive charging capacity of up to 350 kW.

In just five minutes enough power can be charged to achieve an additional range of around 100 kilometres.

The battery can either be charged via a cable connection at a public charging station or a conventional domestic outlet or, for even more convenience, it can be charged wirelessly, via an electromagnetic field. 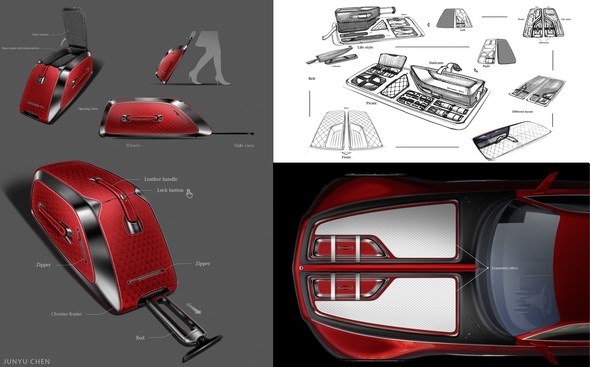 With its impressive dimensions, the Vision Mercedes-Maybach 6 (length/width/height: 5700/2100/1328 millimetres) is the first luxury coupé in the series of visionary design show cars from Mercedes-Benz.

Thanks to the global nature of the Mercedes-Benz Design function, these concept vehicles take cues from local trends in design, culture and mobility and make these the focal point of the respective mobility concept. At the same time these show cars are looking far into the future. 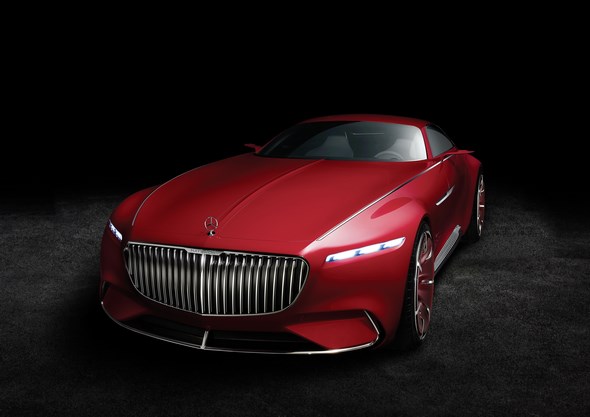 Mercedes-Maybach stands for the ultimate in exclusivity and individuality. The target group is made up of status-oriented customers.

The current vehicles include the Mercedes-Maybach S 500 and S 600 models, launched in February 2015, which blend the perfection of the Mercedes-Benz S‑Class with the exclusivity of Maybach.

The most recent model is the Mercedes-Maybach S 600 Pullman with face-to-face seating. Launched at the beginning of 2016, it adopted the mantle of absolute top-of-the-line model.