Car-2-X Communication: Cars that warn each other of impending danger: DaimlerChrysler first in the world to effectuate the new technology 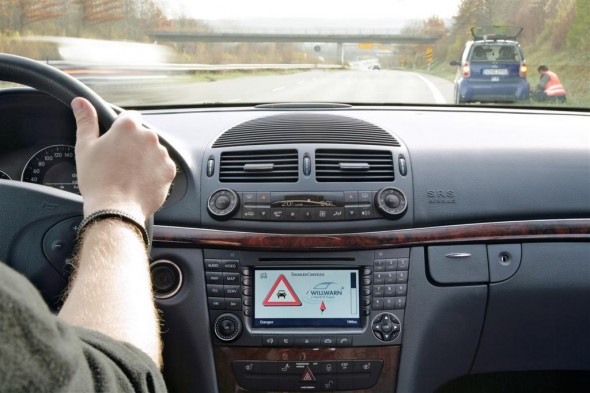 In future, motorists will be able to detect danger even if the danger spot lies around the next bend or over the horizon. This has now been successfully verified by DaimlerChrysler experts and their partners in a field test conducted at the conclusion of the “WILLWARN” (Wireless Local Danger Warning) European research project. During the course of this test, five vehicles equipped with WLAN-based radio technology used the “Car-2-X Communication” system to radio details of critical situations detected by their on-board sensors fog, black ice or obstacles on the road such as broken-down vehicles to following cars. These early warnings enabled the drivers of the cars behind to prepare for the danger and adapt their speed in plenty of time.
DaimlerChrysler had already tested this technology some six years ago a world first at the time by sending the first ever inter-communicating vehicle fleet out onto the road as part of the “FleetNet” research project. This field test demonstrated that WLAN (Wireless Local Area Network) technology, which had already proven a success when used for wireless Internet access, also allowed vehicles to communicate with each other. One of the key benefits is that expensive, fixed-installation transmitting and receiving devices are not required, since the cars themselves act as both transmitters and receivers. The cars establish an ad-hoc radio network and send any necessary warnings to all other vehicles within a radius of around 500 metres. For vehicles outside of this radio range, the cars act as relays and pass on any warnings in much the same way as a relay runner would hand over a baton. No additional sensors are required to detect critical situations, since the necessary information is provided by the anti-lock braking system (ABS), the Electronic Stability Program (ESP), the steering-angle sensors, the outside thermometer or the navigation system. 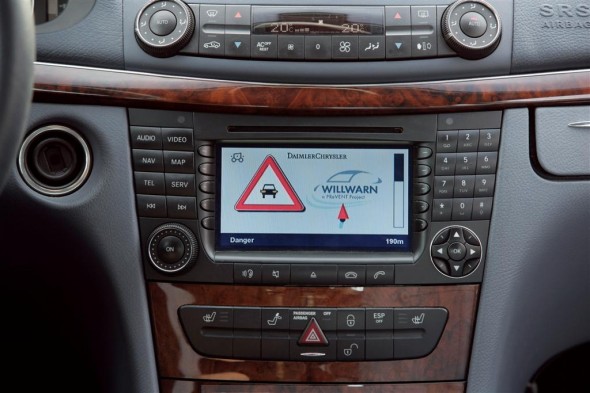 The DaimlerChrysler engineers incorporated the key groundwork laid during the course of the “FleetNet” project into the subsequent “NOW” (Network On Wheels) programme (a German cooperation project) and the current “WILLWARN” project. Their aim was to use the experience gained to work together with partners from the automotive components and electronics industries in order to further develop and standardise this promising technology whilst also securing the rights to use the required frequencies. The DaimlerChrysler specialists also supplied information to partners who only joined the project at a later stage, quickly realising that the only way to establish a fully-functioning WLAN radio network that would benefit all road users was to cooperate with other car manufacturers and the relevant authorities. After all, for an ad hoc radio network to be of any use, enough vehicles have to be equipped with the necessary technology.

Radio beacons at the side of the road are required in order to ensure that the first vehicles to be equipped with such a system benefit immediately. These stationary radio nodes could also be used to provide traffic control centres with additional and better information. However, direct contact with the Internet and its numerous fields of application is also possible. In addition to warning motorists of critical situations in advance, the new radio network could therefore also be used to improve the flow of traffic: communicating cars could guide their occupants away from traffic congestion or even prevent tailbacks from occurring at all. 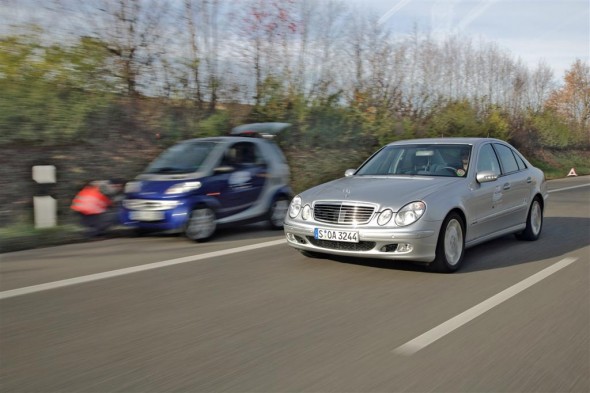 DaimlerChrysler was also one of the instigators behind the European “Car2Car Communication Consortium” and is involved in the American Vehicle-Infrastructure Integration Initiative. These projects lay the political foundations for vehicle communication in Europe and America and have the aim of accelerating the process of standardisation.

Fatigue at the wheel: Mercedes-Benz developing warning system for motorists