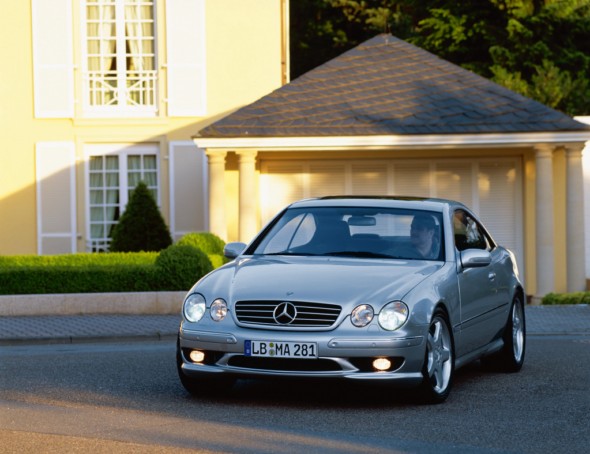 New heights in design and technology 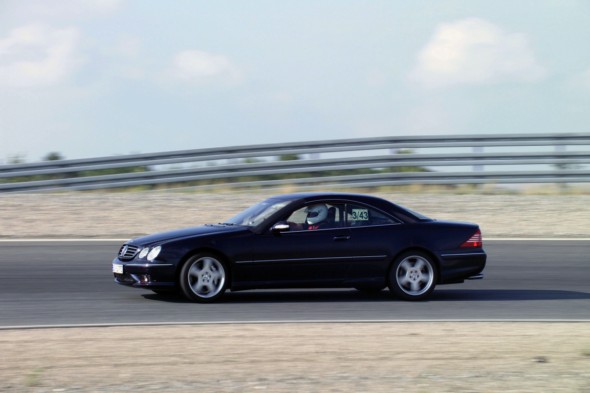 Stuttgart – Dynamic, elegant lines combined with safety and driving enjoyment by virtue of high-tech innovations – it is with this high ideal that the successful Mercedes-Benz CL-Class is embarking on model year 2003 and once again setting standards in design and technology. 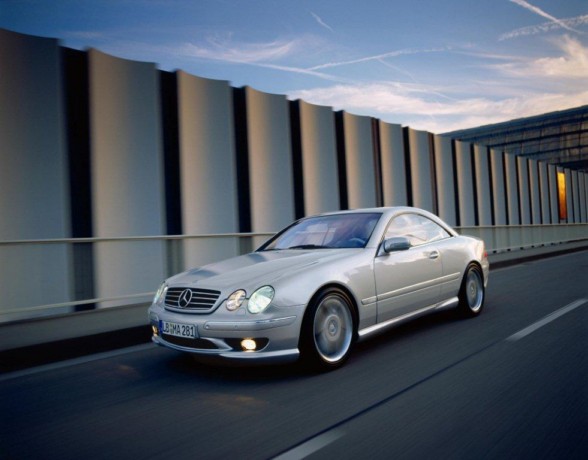 In autumn this year the top-class coupé will be on view in the company-owned sales outlets and dealerships of the Stuttgart-based brand with a discreetly updated body design, an enhanced interior and the latest high-tech features. 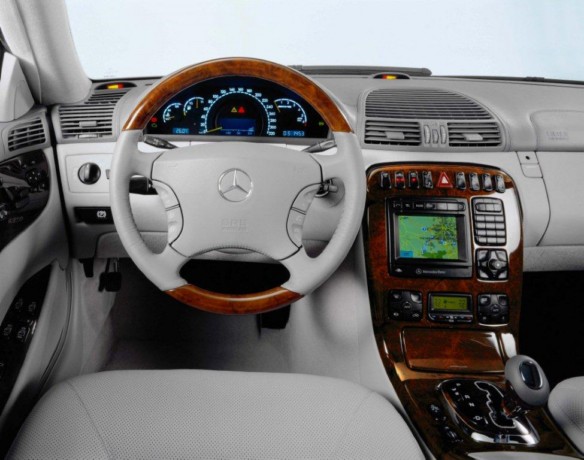 The most obvious external features of this Mercedes dream car are the redesigned twin headlamps in a modern clear-lens look and the restyled front bumper, which accentuates the muscular appearance of the coupé even more strongly. 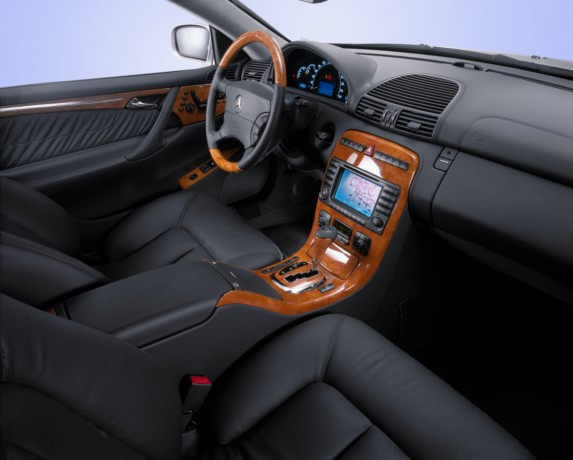 The exterior mirror housings have also been modified and equipped with entry/exit lights which automatically illuminate the area around the front doors when these are opened or the central locking system is operated by remote control. This feature improves the safety and comfort of passengers when entering and leaving the car. 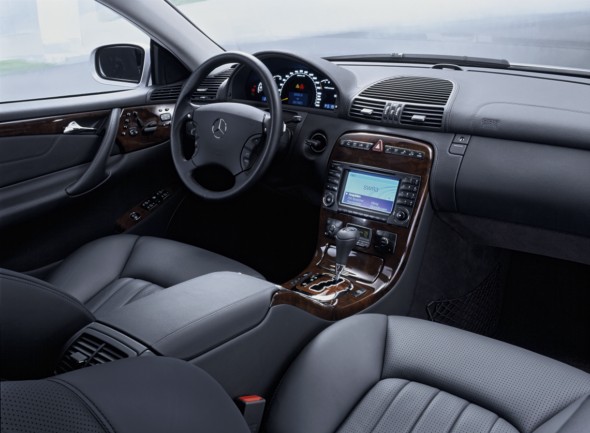 At the rear of the CL-Class the more brilliant appearance and redesigned lenses of the rear lights accentuate the elegant character of the coupé.

With a newly developed twelve-cylinder engine equipped with twin turbochargers the CL-Class now enters the performance class of thoroughbred, luxury sports cars. The V12 power unit of the CL 600 has an output of 368 kW/500 hp and generates a maximum torque of 800 Newton metres from 1800 rpm with a charge pressure of one bar. 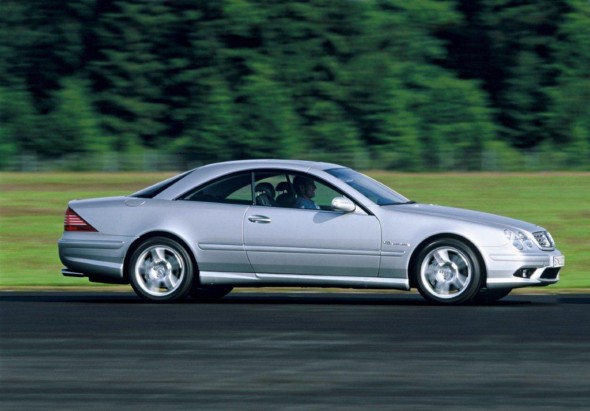 Accordingly this advanced 5.5-litre engine exceeds the output of the previous Mercedes twelve-cylinder by approx. 36 percent and its torque by no less than 51 percent. With so much power beneath its bonnet the CL 600 accelerates from standstill to 100 km/h in just 4.8 seconds (predecessor: 6.1 seconds). The maximum speed is electronically limited to 250 km/h. 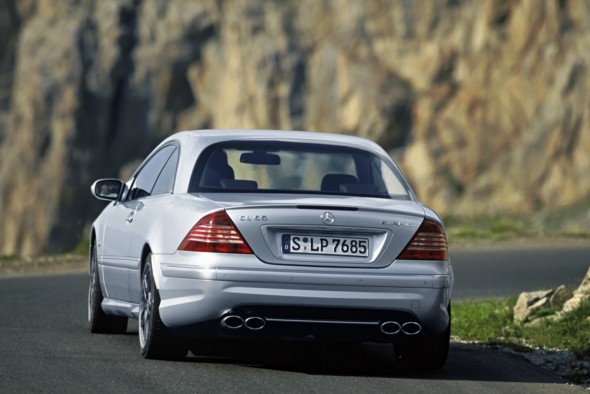 In addition to the twin turbochargers the highlights of the new V12-engine include a special low-temperature circuit with two water intercoolers, three-valve technology and AC twin-spark ignition with constant ionic current measurement for optimal ignition.

Thanks to this advanced engine technology and efficient emission control with two firewall-mounted catalytic converters the new Mercedes twelve-cylinder already meets the stringent EU-4 emission limits for the year 2005. The fuel consumption of the CL 600 is 14.7 litres per 100 kilometres (NEDC overall consumption).

All CL-Class models are equipped with a milestone in modern car engineering as standard: the Active Body Control (ABC) system. This unique system developed by Mercedes-Benz adapts the damping of the car body to the current driving situation in a split second, thereby reducing body movement to a minimum during drive-off, cornering and braking.

For the 2003 CL-Class Coupés the engineers in Sindelfingen have developed an additional technology which constantly monitors the total weight of the vehicle and takes this value into account when calculating the active suspension control parameters. The result is even more dynamic handling, practically irrespective of the vehicle load. 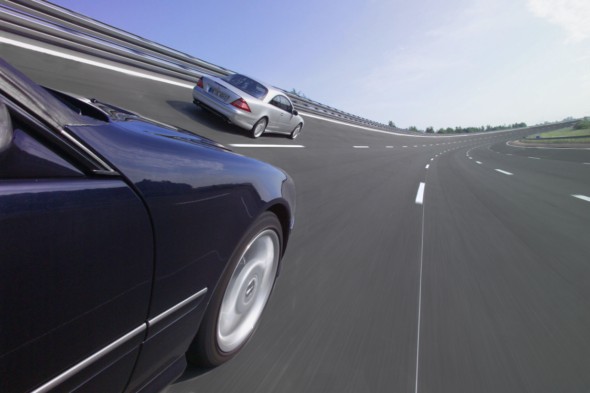 Safety: Airbag activation according to accident severity and the weight of the front passenger

In the field of occupant safety the CL-Class Coupé with its two-stage front passenger airbag, windowbags and sidebags, high-performance belt tensioners, belt force limiters and automatic child seat recognition has been exemplary for this vehicle class ever since the start of series production in autumn 1999.

From model year 2003 Mercedes-Benz is supplementing this innovative safety technology with so-called up-front sensors at the front end which make it possible to assess the impact severity at an early stage during a crash and activate the front passenger airbag in two stages depending on the situation. Thanks to the up-front sensors the belt tensioners can also be activated at an earlier stage to ensure that the occupants are optimally restrained by the seat belts during a crash. 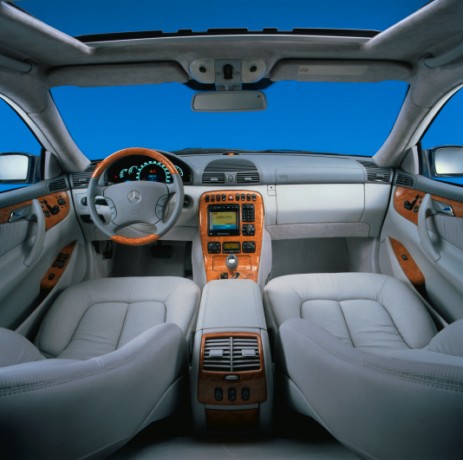 From autumn 2002 the Mercedes designers are also enhancing the exclusive interior of the CL-Class with careful design modifications. This becomes immediately apparent when entering the car. The centre console features new, attractively formed switches and the standard COMAND unit with an integral radio and CD-player, whose colour display (format 16 : 9) has been enlarged to 6.5 inches. 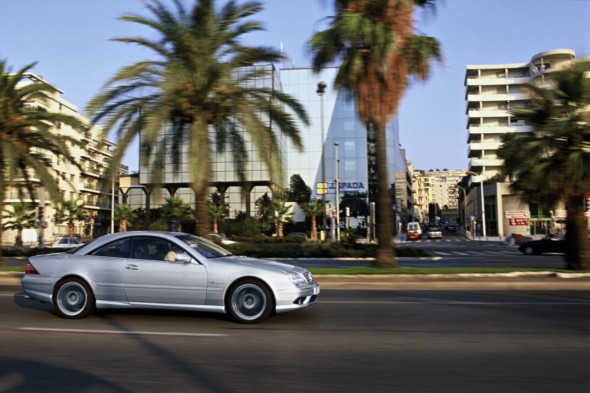 There are very few cars in the world which have the aura and style of the large Mercedes coupé. This is a dream car par excellence – a masterpiece of automobile development which exhibits all the identifying characteristics of the Mercedes-Benz brand: sophistication, elegance, dynamism, comfort, safety and technological leadership. The sum of these characteristics is the basis of a promise which the CL-Class has been keeping for mile after mile since its world premiere in March 1999: coupé driving pleasure in its most comfortable and luxurious form.

The two-door Mercedes combines elegant design with technical perfection and dynamism with exclusivity. All the more so following the discreet model facelift, which refines details of the car’s prizewinning design and particularly emphasises the sporty, elegant aspects of its appearance.

One of these details is the redesigned front bumper, whose lower air intake is the focus of these modifications. Extending its centre section and significantly enlarging the side apertures has created a more muscular visual appearance which perfectly suits the Mercedes coupé and its unmistakable face.

The rub strips on the bumper, which are embellished with fine chrome surrounds, have been extended towards the vehicle centre – a detailed enhancement which lends the front end an even more elegant appearance.

The same applies to the standard bi-xenon headlamps . These now have a modern clear-lens look, which not only affords an interesting view of the advanced lighting technology in the CL-Class Coupé, but also creates visual highlights with its highly polished surfaces.

The halogen units, positioned on the inner side of the typical Mercedes twin-headlamp arrangement, the foglamps in the bumper and the side indicator repeaters in the exterior mirror housings also benefit from the clear-lens look.

The redesigned exterior mirror housings also incorporate entry/exit lights. These cast a beam of light downwards to illuminate the area beside the coupe, so that passengers are able to enter and leave the car more safely and conveniently in the dark. These entry/exit lights are switched on automatically as soon as the driver or front passenger opens the door, or if the doors are unlocked by remote control.

The stretched silhouette with its curved roof line, which elegantly blends into the rear pillars and the panoramic rear window, is without doubt the “sunniest side” of the large Mercedes coupé. In the top CL 600 model the designers have enhanced this striking aspect still further with newly styled light-alloy wheels, as well as with larger, wider tyres which are in keeping with the even more muscular overall appearance of the car:

Detailed design revisions at the rear end of the CL-Class lend the coupé greater elegance and athleticism even at first glance. This is due to the discreetly modified bumper and the striking rear lights, which have fine horizontal divisions in the centre sections. Equally effective are the revised rear light reflectors, which reinforce the brilliance of the rear-end design.

In the view of Mercedes specialists there was no reason to make any further stylistic changes to the CL bodywork. Three years after its premiere this exciting coupé in turn confirms an outstanding characteristic of Mercedes design, namely long-term quality.

Other detailed enhancements in the interior

The interior completes the unique CL experience. Not only the seats and centre console armrest, but also the complete instrument panel and the door and side panels of this dream car are lined in leather. In the case of the CL 600, where particularly soft nappa leather is used, the parcel shelf and side areas of the centre console are likewise finished with this exquisite material, while the roof pillars and roof are lined with fine Alcantara.

Mercedes designers have subjected the already very high standard of appointments to careful examination in virtually every single detail, making tasteful refinements it and thereby enhancing the high-quality ambience of the interior even further.

Discreet chrome trim, for example on the lock cylinder of the glove compartment, on the base of the cupholder in the centre console or on the rotary controls for the COMAND system, is among the detailed enhancements made as part of this facelift. The twin door sills – both of chrome-plated stainless steel – likewise accentuate the exclusive nature of the large Mercedes Coupé.

The main focus of the instrument panel continues to be the sweeping centre console, whose entire surface is embellished with exotic wood trim in burr walnut or chestnut. The switches for PARKTRONIC, the rear window blind, Active Body Control , the central locking system and other functions have been redesigned – they now operate according to the “push-push” principle.

This means that the systems are switched on or off at the mere touch of a button. The keys to the left and right of the shift lever and the switches operating the power windows are also in this new design.

The advanced operating and display system COMAND is now standard equipment in both CL models. Its screen has been enlarged by one third to 6.5 inches and is now TV-compatible thanks to its likewise new 16 : 9 format. In its standard version COMAND includes a car radio with VHF, medium and long wave, four 25 Watt amplifiers, a clock and a CD-player.

Using the redesigned rotary controls and the keys on both sides of the colour display, the driver and front passenger are also able to operate other, optionally available equipment such as a car phone, CD-changer or TV receiver. A portable cassette deck or MP3-player may be connected to a jack in the glove compartment.

The optionally available system COMAND APS features a navigation module with dynamic route guidance. The integral CD-deck plays both audio CDs and the CD-ROM for the navigation system.

The car phone and radio can be operated using the voice control system LINGUATRONIC  (optional equipment). In this case a few words from the driver are enough for the system to search for another radio station or skip to the next track on an audio CD, for example. With this technology Mercedes-Benz is making a further important contribution to road safety, as drivers no longer need to take their hands off the wheel and their eyes off the road to operate the telephone or audio equipment.

The attractively styled four-spoke steering wheel of the CL-Class Coupé can be equipped with an electric heating system – an optional extra that noticeably improves comfort in winter and makes the steering wheel more pleasant to the touch.

The heater warms the rim of the steering wheel with an output of approx. 100 Watts; after approx. seven minutes the system automatically reduces the heating output and switches off completely at higher interior temperatures.

Model history: the saloons of the Mercedes-Benz 123 series