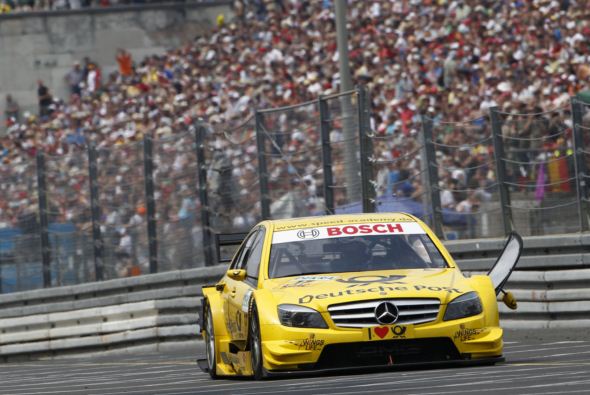 Three Wins in a Row at the Norisring

Jamie Green (Junge Sterne AMG Mercedes C-Class) won the 2010 DTM’s fourth round at Nuremberg’s Norisring. After 82 laps (188.600 kms), he came home 0.591sec ahead of Mattias Ekström (Audi). It is Jamie’s third win at the Norisring in a row – all three of them he achieved with the same car which is a new record for the DTM.

§ Mercedes-Benz achieved the eighth continuous Nuremberg victory and the 13th at this circuit out of 30 races since 1988. It is the 155th DTM win for the brand since Mercedes-Benz entered the championship as a factory team in 1988.

§ Achieving his fourth continuous podium finish, Bruno maintained the overall lead with now 32 points. Jamie improved to second overall with 22 points ahead of Ekström with 21 and Gary with 19 points. Salzgitter/Mercedes-Benz Bank AMG with Spengler/Paffett leads the team ranking with 51 points; this can be compared to the Constructors‘ Championship in Formula One.

§ Ralf Schumacher (Laureus AMG Mercedes C-Class) who had started from pole position for the first time in the DTM, received a drive-through penalty because of a jump-start and therefore ended up 11th despite posting the fastest lap of the race (48.616sec on lap 65). David Coulthard (Laureus AMG Mercedes C-Class) who lost the left door due to a collision without own fault came home 13th.

§ A total of 132,000 spectators attended the DTM race at the Norisring during the weekend. 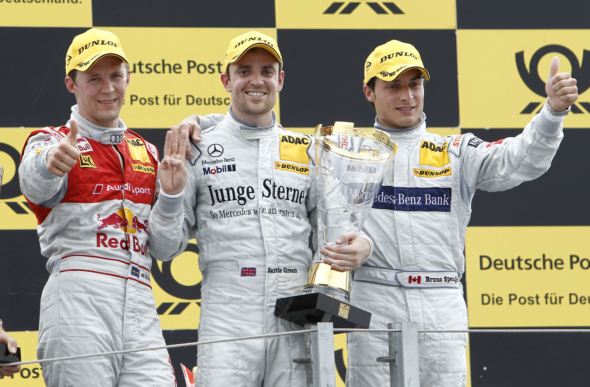 The start:For the first time in the DTM, Ralf Schumacher started from pole position, followed by Bruno Spengler and Jamie Green. Ralf led the field to the Grundig hairpin followed by Jamie and Bruno. Paul Di Resta was pushed into a spin by Alexandre Prémat at the Esses and dropped to the back of the field.

Lap 5: Drive-through penalty for Ralf Schumacher because of a jump-start.

Lap 7:Ralf Schumacher drove through the pit lane whilst Jamie Green took the lead ahead of Bruno Spengler. Ralf dropped to 18th and last position.

Lap 42:Jamie Green pitted from the lead. One lap later, Ralf Schumacher (fourth) was the last C-Class driver to make his first stop.

Lap 55:Gary Paffett (fifth) came in for his second stop.

Lap 57:Jamie Green pitted from the lead and maintained the top spot ahead of Mattias Ekström. Ralf Schumacher (second) came in for his second stop one lap later.

Lap 59:After the second round of pit stops, Jamie Green held a lead of 2 sec ahead of Mattias Ekström. Bruno Spengler was third ahead of Oliver Jarvis, Timo Scheider and Gary Paffett.

Finish (lap 82):Jamie Green won with half a second ahead of Mattias Ekström whilst Bruno Spengler came home third and Gary Paffett sixth. 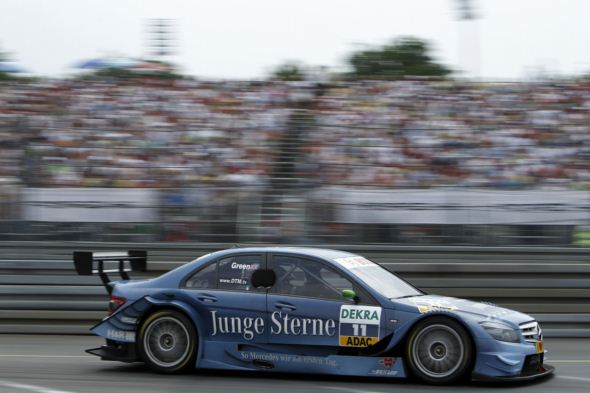 Jamie Green (Junge Sterne AMG Mercedes C-Class) winner: “We cannot play football, but at least we can win races. However, it was tough. Mattias Ekström was pushing throughout and I had to stay totally focussed until the chequered flag. On this track it is so easy to make mistakes. Therefore, I am even happier to achieve this hat trick here at the Norsiring and my sixth DTM win in total. Thank you to everybody in our Persson team – their hard work made this win possible, and particularly the fastest pit stop of the race.”

Bruno Spengler (Mercedes-Benz Bank AMG C-Class) third: “I am quite happy with third position. Of course, a better finish would have been nice but six championship points are ok. In the end, my C-Clas was faster and faster and with a few laps more I would have had a chance to challenge the leaders.”

Gary Paffett (Salzgitter AMG Mercedes C-Class) sixth: “I struggled with understeer throughout the race; therefore I was not able to attack. I just lacked a bit of speed. At least I scored three points.”

Maro Engel (GQ AMG Mercedes C-Class) ninth: “I am happy to finally experience a race without incidents again. So, ninth place is quite reasonable, but a points finish would have been better, of course.”

Paul Di Resta (AMG Mercedes C-Class) 10th:“My race was over on the opening lap when Prémat pushed me into a spin. I fought back to finish 10th but you don’t get points for this place.”

Ralf Schumacher (Laureus AMG Mercedes C-Class) 11th: “Today I gave away a possible race win. I am awfully sorry for my team that we were not able to show how strong our C-Class was here at the Norisring. Shortly before the start I was looking for the clutch’s bite point when the car made a brief move whilst the light was still red. My speed was very good which is also demonstrated by my fastest race lap. This weekend motivates us even more for the next race at the Nürburgring and for the rest of the season.”

David Coulthard (Deutsche Post AMG Mercedes C-Class) 13th: “Despite losing the door early on when I was hit by another driver, I tried to race as fast as I could and in these circumstances I think my race was quite ok. I only struggled at the last sector which just doesn’t suit me. Anyway, I enjoyed the many fans and the fantastic atmosphere.”

CongFu Cheng (stern AMG Mercedes C-Class) 14th:“The first half of my race was not bad but then I lost my pace. Therefore I was not able to push. This was my first DTM race on a temporary street circuit – a good foretaste of the season finale at Shanghai.”

Susie Stoddart (TV-Spielfilm AMG Mercedes C-Class) 15th: “As a consequence of a first-corner collision, my right door was damaged which caused significant vibrations. I was not able to improve and just tried to finish the race.”

Norbert Haug, Vice President Mercedes-Benz Motorsport:“What a race! Jamie Green won at the Norisring for the third time in a row – and this with one and the same car. Congratulations to Jamie and the Persson team on this success. Such a hat trick has not happened in the DTM before. We are all happy about the eighth continuous Mercedes victory at the Norisring and tonight we will celebrate – and certainly not only a little bit.”

New BlueTEC model and active assistance systems for the S-Class