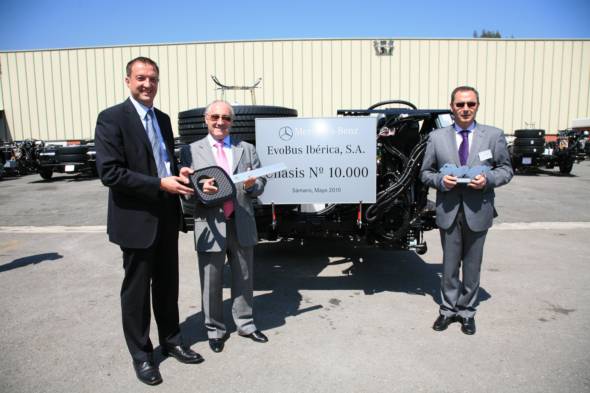 Sámano (Cantabria) – EvoBus Ibérica, established in 1998, is the Spanish subsidiary of EvoBus GmbH, which is part of the Daimler Group. The 12-year-long success story since the company was established has now culminated with handover of the celebratory chassis to Sanfiz S.L.

EvoBus Ibérica has one of the most modern production plants and a workforce of 262 employees. In 2003 the plant in Sámano, which has specialised in the production of chassis for urban buses and touring coaches, became a competence centre for Mercedes-Benz chassis in Europe.

EvoBus Ibérica produces chassis for rural-service buses, urban buses, midi­coaches and airport buses for the domestic Spanish market, in which numerous coach builders are represented, as well as for international markets. The most important export markets in Europe are Germany, France, Great Britain and Portugal. The chassis also go to Australia, Israel, Mexico and Singapore.

The Mercedes-Benz modular chassis system offers the great advantage of flexible body solutions. Customers can choose from different body lengths and variants with regard to permissible gross vehicle weight, enabling them to configure a vehicle that perfectly meets their requirements.

All Mercedes-Benz products feature the most modern technology. The engines of the latest generation are equipped with environmentally friendly BlueTec diesel technology, which guarantees compliance with the Euro 5 standard.

Sanfiz S.L. was established at the beginning of 1977. The bus operator is responsible in the north of Madrid for school bus services, plant-internal transportation, shuttle bus services for company employees and managers as well as for private excursions and shuttle services to events.

The fleet currently comprises over 30 vehicles with 14, 35 or 55 seats, including buses for passengers with limited mobility. The average age of the vehicles is less than three years old.

"Sex and the City 2": roles for Mercedes-Benz and Maybach

Out into the big wide world with the Unimog