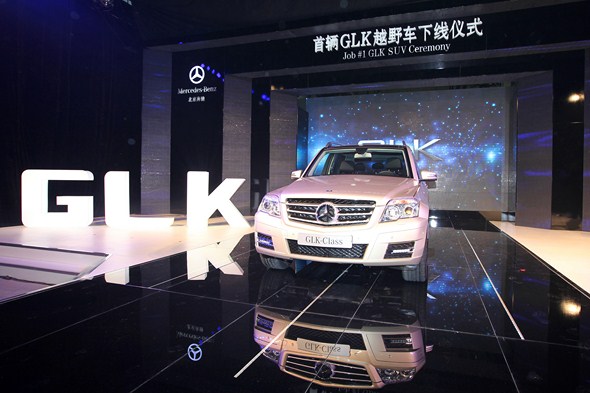 •     Dr. Wolfgang Bernhard: “The green light for local production of the GLK in China exemplifies our strategy of global expansion of production close to the market.”

Beijing, China / Stuttgart, Germany – Marking another milestone for Mercedes-Benz in China, in early December the first locally produced Mercedes-Benz GLK compact SUV rolled off the line at the Beijing production plant of Beijing Benz Automotive Co., Ltd. (BBAC). This follows the June 2011 agreement between Daimler and Chinese Joint Venture partner BAIC to further expand their cooperation in China with various projects, including the GLK.

Dr. Wolfgang Bernhard, member of the Daimler Board of Management, Manufacturing and Procurement Mercedes-Benz Cars & Mercedes-Benz Vans, explains: “The start of our local GLK production in China exemplifies our strategy of global expansion of production close to the market. We are thus supporting our sales success in our regional markets also from the production side, an important contribution to the Mercedes-Benz 2020 growth strategy.”

Ulrich Walker, Chairman & CEO of Daimler Northeast Asia, adds: “The GLK has proved to be enormously popular with customers here in China, so it is an ideal addition to our lineup of locally-produced vehicles.” Emphasizing the importance of the Chinese market, Mr. Walker continued: “Nothing represents our long-term commitment to China more tangibly than the production of vehicles in China itself: The localized production of further Mercedes-Benz models is an important element of our growth strategy for the Chinese market. As early as 2015 we expect to locally produce two-thirds of all Mercedes-Benz passenger cars sold in China. The start of production of the GLK is another important milestone towards this goal.”

The Mercedes-Benz GLK has received a very warm welcome from customers worldwide since its debut in 2008. In particular in China, a growing number of customers have appreciated the brand’s compact SUV, with sales already well in excess of 20,000 units in the current year. China now represents one of the most important markets worldwide for the GLK.

Mercedes-Benz sold 168,940 vehicles overall in China (including Hong Kong) from January through November 2011, an increase of 29.9 percent compared to the same time-frame in 2010. Year-to-date sales in October 2011 already exceeded the total number of cars sold in 2010. The next few years are also certain to see further sales growth: in 2015, the company aims to sell more than 300,000 Mercedes-Benz passenger cars in China.

My recommendation: "A great magazine"