Alongside the seat belt, airbag and ABS, the Daimler invention is by far the most significant safety system of modern passenger cars and over the years has helped to save the lives of several thousand people. ESP® has been mandatory for new passenger cars in Europe since November 2011.

It was with ABS (1978) and acceleration skid control (1985) that safety pioneer Mercedes-Benz began to control dynamic driving processes with electronic systems for the first time.

The next step followed in 1995: additional sensors that recognise the driver’s directional intentions (steering angle sensor) and whether the car is sliding sideways (lateral acceleration sensor), or is in the process of rotating around its own vertical axis (yaw rate sensor), provided the basis for the Electronic Stability Program ESP®.

From March, this worldwide innovation was fitted as standard on the S 600 (C 140) luxury Coupé. A few months later came its application in the S-Class Saloon (W 140) and the SL Roadster (R 129).

The V12 models had the safety system as standard, while for the V8 models of this series it was initially available as an option. 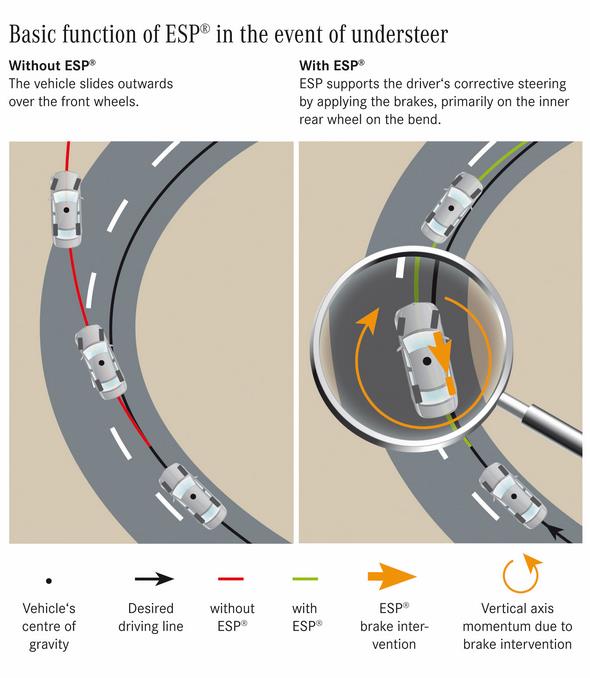 However, it was in 1997 that the rapid spread of safety technology began: a Swedish car tester exceeded the critical limits of driving dynamics by causing the new compact A-Class to overturn during an abrupt evasive manoeuvre (“Elk test”).

What at first seemed to be a setback for Mercedes-Benz became a triumph: in 1997 the company systematically made ESP® standard equipment – first for the A-Class, then for all its models.

All the other manufacturers had to follow suit: following a directive by the European parliament and the Council dated 13 July 2009, it has been mandatory to equip all passenger cars and light commercial vehicles newly registered in the EU with ESP® as standard since November 2011.

“Alongside the seat belt, the airbag and ABS, ESP® is by far the most significant safety system of modern passenger cars”, stresses Prof. Dr Thomas Weber, Member of the Board of Management of Daimler AG and responsible for
Group Research and Mercedes-Benz Cars Development.

As a safety pioneer, Mercedes-Benz invented skid protection. Precisely how the bold idea found its way into series production is described by Frank-Werner Mohn, one of the fathers of ESP®, in an interview at the end of this press release. 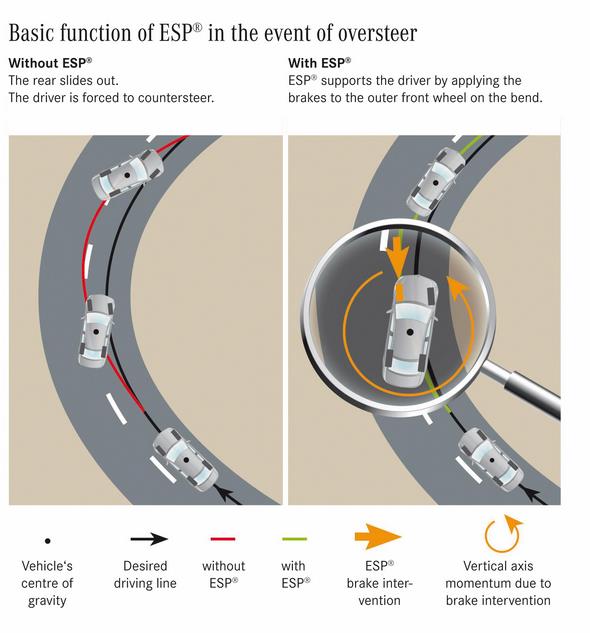 The introduction of ESP® was a significant step towards reducing accident rates: according to estimates made as early as 2008 by accident researchers of the German Insurance Association (GDV), if all cars had been fitted with such a stability program then each year in Germany alone around 37,000 accidents resulting in injuries and 1100 accidents resulting in deaths could have been completely avoided or their consequences significantly reduced.

Based on these figures, ESP® has already helped to save the lives of several thousand people throughout Europe.

ESP® helps the driver in situations in which he or she risks losing control of the vehicle. If it detects a critical dynamic driving situation, it specifically applies the brakes to one or more wheels according to the situation and requirements.

In addition, if the system detects it to be necessary, the engine torque is automatically adapted. In this way, ESP® helps the driver to stabilise the vehicle once again – particularly when cornering and in sudden evasive manoeuvres.

At the heart of the stability program is a yaw rate measurement unit. It constantly monitors the movement of the vehicle around its vertical axis and compares the actual value which is measured against the specified value, based on the steering input of the driver and the speed.

As soon as the vehicle deviates from this ideal line, ESP® intervenes and controls any skidding movements as soon as they arise.

A key milestone was the introduction of electric power steering: while only brake intervention and a reduction in engine torque were possible up until this point, from 2005 steering input also began to play a helping hand in vehicle stabilisation.

However, it is in the area of the fine-tuning of the ESP® system that the most noticeable advances have been made for car drivers: whereas the electronics of the first A-Class were still somewhat radical in bringing it to a virtual standstill, in the meantime ESP® has been developed to intervene in a very cautious manner, keeping the vehicle on the road with minimal loss of speed.

And the 3-stage-ESP® of the sporty Mercedes-AMG models even boasts tailor-made transmission modes: with “ESP ON”, “SPORT Handling Mode” and “ESP OFF”, the dynamics of the vehicle can be modified at the press of a button.

Fully in line with the “Intelligent Drive” philosophy of Mercedes-Benz, ESP® has also come to include numerous sub-functions and to serve as the basis for further assistance systems. The following is an overview (in alphabetical order):

“We have only just embarked on our journey”

Frank-Werner Mohn is one of the fathers of the ESP® system – the decisive idea came to him during a business trip to Sweden.

After studying mechanical engineering at RWTH Aachen University, in 1982 he embarked on his professional career at Daimler.

In 1987 he switched from engine development to the electronics group, taking on responsibility among other things for the pressure metering of what was a brand new system at that time, namely ABS.

Today the 57-year-old qualified engineer works in the driving assistance systems department of Mercedes-Benz. In addition he gives lectures on vehicle construction and driving dynamics at the Mannheim University of Applied Sciences.

Mr Mohn, the catalyst for inventing ESP® was an accident in Sweden. But not the accident which everyone now automatically thinks of…

Mohn (with a laugh): Precisely, I have even kept all of the documentation relating to the expenses claim made at the time. 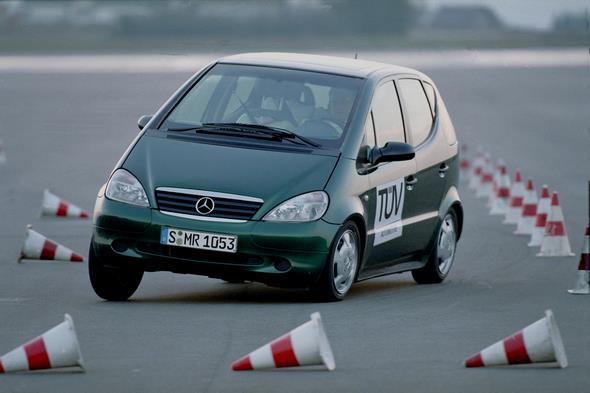 You see, at the time it was called “recovery assistance”, and the towing operation cost 485 Swedish krona. On the way to some test drives in the north of Sweden, on 29 January 1989, I ended up in a ditch. It had been very cold at night, then the sun came out, and as a result the road was as smooth as glass in the middle of the day.

I was driving a 124-series Mercedes 300 E‑24, gave a bit of gas, the rear end broke away and we eventually ended up stuck in a wall of snow near Strömsund.

Wasn’t that rather embarrassing as a young engineer?

Mohn: Yes, so much so that I wasn’t able to sleep over the following nights, and I spent my time pondering how such a thing could be avoided. Clearly the lateral forces had been too high at the front and too low at the rear.

So in a manner of speaking that was the moment at which ESP® was born?

Mohn: Yes. I came upon the idea of stabilising the vehicle by means of forced braking.

Where did things go from there?

Mohn: I was able to convince my head of department at that time, Professor Adam Zomotor, about this vision.

In April 1989 I took on a new task involving the verification of vehicle models, and was assigned an employee, a young engineer called Thomas Wohland – and unofficially we pursued the idea further.

Initially we developed a mathematical model for calculating torques, which we were able to present in the form of the three operating conditions of oversteer, neutral and understeer.

This wasn’t possible without any hardware though, was it?

Mohn: No, we got hold of the necessary components from colleagues, through direct official channels… (with a smile).

You mustn’t forget here that at the time, ABS only came out with two speed sensors at the front and one at the rear.

We needed the sensor system on both rear wheels, and just about managed to cobble something appropriate together. 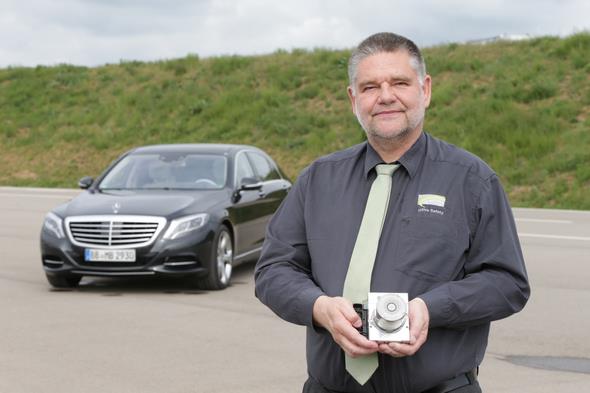 Later we had to deal with the vehicle’s rotation around its vertical axis – this gave us the idea of using a gyro sensor from a model helicopter… Ultimately, at some point in the winter of 1990 we were ready and had fitted out a functional vehicle.

On board we had a display similar to a traffic light, with three lights, and the corresponding light flashed depending on the driving condition.

So after two years of undercover advance development work, in the spring of 1991 it was time for the showdown?

Mohn: Yes, we were able to demonstrate our prototype, an inconspicuous mouse grey 124-series model, at an exhibition for developers in Arjeplog in Sweden.

Joining us on the test drives was a colleague from transmission development, who was a very careful and rather slow driver.

Once in our self-stabilising vehicle, he immediately drove around the frozen lake almost as fast as the others – his enthusiasm also certainly contributed to series production development then taking off…

Was this in conjunction with Bosch?

Mohn: Yes, series production development began in 1992. More than 40 engineers from Mercedes-Benz and Bosch, including Anton van Zanten, another father of ESP®, worked on the project and competed with each other to build cars. At the time I stayed in the Advance Development section.

In 1995, the Mercedes S 600 came onto the market as the first model fitted with ESP® as standard. So today, 20 years later, has the topic of ESP® been exhausted?

Mohn: No, further development has been rapid over the years but is not about to stop now. As far as I’m concerned we have only just embarked on our journey.

There are still so many possibilities: from networking with other safety systems, which is something we are currently already doing with “Intelligent Drive”, through to linking with the information from other cars using Car-to-X technology…

Mercedes-AMG DTM Team in the 2015 season