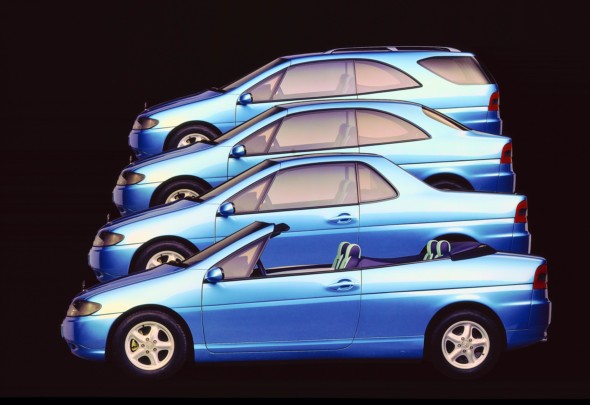 Four cars rolled into one – variability was very much to the fore when Mercedes-Benz developed the concept of the Vario Research Car (VRC) which celebrated its much-acclaimed premiere at the Geneva Motor Show (March 9 – 19, 1995). The VRC can be converted into a different type of car within minutes. 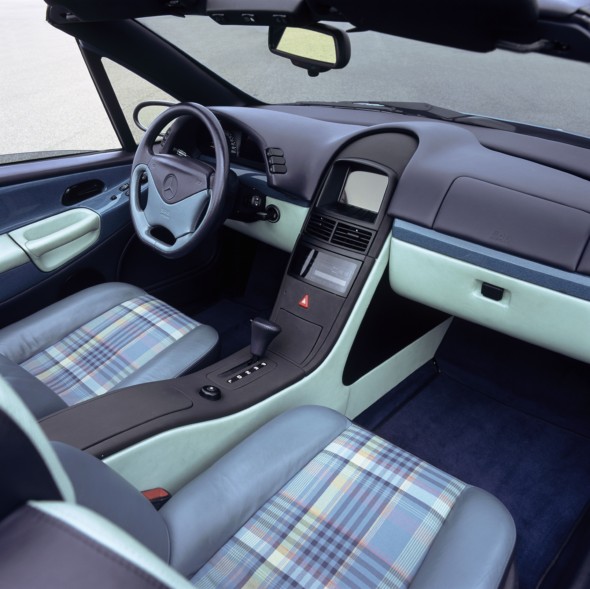 No matter what sort of trip, you won’t need more than one car thanks to the variability of the Vario Research Car’s bodywork. Whatever the task, the right car is available: a sedan during the week, a station wagon with ample luggage space for holiday travel, a convertible for pleasurable open-top outings in the summer and a pickup for carrying bulky loads on its open platform.
Mercedes-Benz solved the task with a compact two-door car, featuring a one-piece superstructure that consists of roof, side walls and rear section. This superstructure can be lifted off and easily replaced by another variant in just 15 minutes. 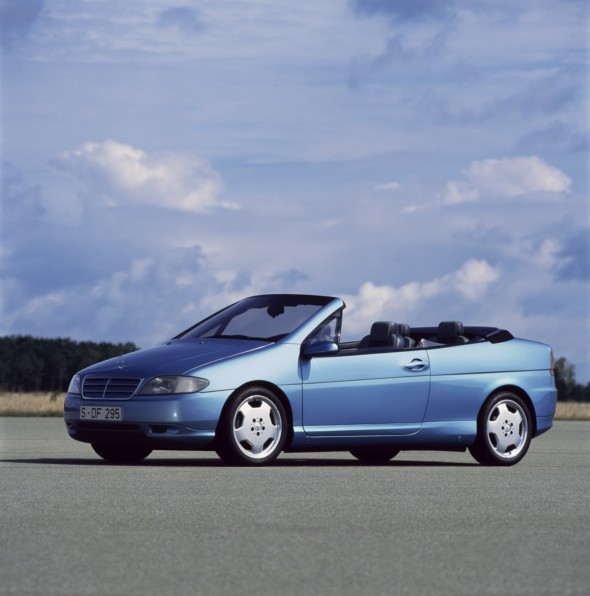 The Vario Research Car was associated with a vision. The idea was that customers do not own the different superstructures themselves but take their cars to a rental station where superstructures are exchanged by service technicians while customers are having a cup of coffee. After a few minutes, customers are able to continue their journey. It is up to them to decide for how long they wish to use a specific superstructure as the rental system is just as flexible as the car itself. 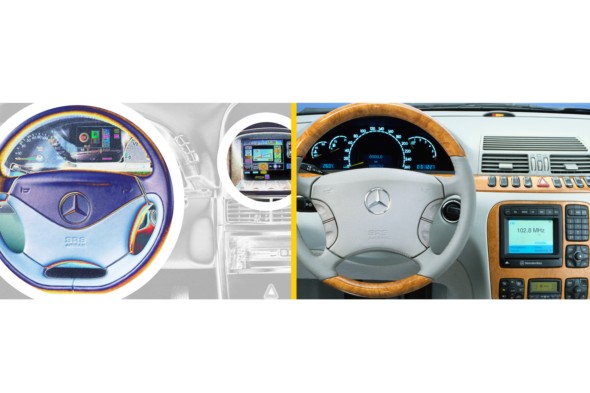 Development of the Vario Research Car was prompted by research into the future. According to the latter’s prognosis, people will have more leisure time at their disposal and spend this leisure time by engaging in very different activities. And they will want to select their cars with leisure time activities and everyday use in mind. Keeping one’s own small fleet would, however, be uneconomical. This is where the Vario Research Car from Mercedes-Benz comes into the picture.
Being a research car, the VRC additionally served the purpose of testing several future-oriented engineering features. Some of these obviously related to the exchange of superstructures. This exchange is to be performed easily, made possible by the interplay of several components. 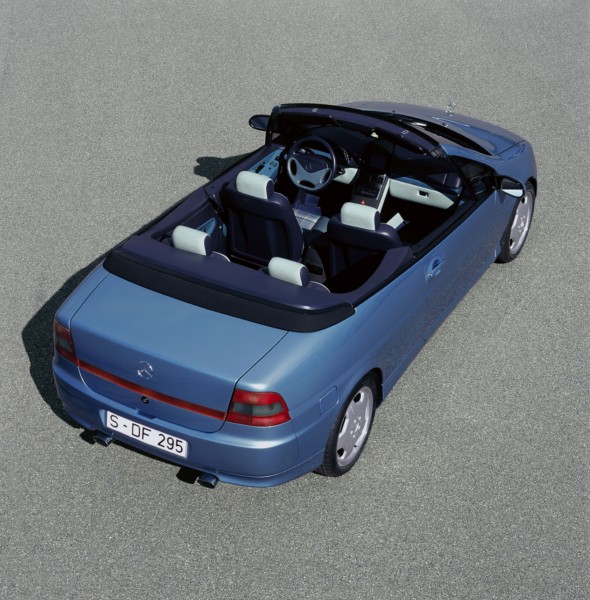 The service technicians lower the superstructure onto the chassis, electric motors pull it into its final position and special locks and strong solenoids keep it in position at eight attachment points. For the electric connections at the rear, differing depending on the type of superstructure, a central connector with automatic identification is provided. When the station wagon superstructure is mounted, for instance, the rear screen wiper and washer systems are connected to the electric circuit.
The superstructures are light and sturdy – the result of engineering work comprising the testing of new materials in the Vario Research Car. The bodies are made of high-tech CFRP, carbon-fiber reinforced plastic. Compared with aluminum, CFRP is 25 percent lighter and distinguished by its high strength. The superstructures tip the scales at between just 30 – 50 kilograms each, providing high levels of stability and crashworthiness despite their lightweight design.
In addition, the Vario Research Car was used for the testing of front-wheel drive in a Mercedes-Benz, combined in this case with a continuously variable automatic transmission, as well as for testing Active Body Control (ABC) designed to improve handling safety and comfort.
The cockpit features a color display that provides the driver with all the required information. Operating the rotary actuator in the center console, the driver can select the desired menu items, including not only engine revolutions, onboard computer and trip meter but also route recommendations from the onboard navigation system – far from being a matter of course in 1995, the year in which the VRC was presented.

A special feature is the so-called safety display, showing a green circle as long as the driver observes the specified speed limit. The color and shape of the symbol change when he or she drives faster or does not maintain the correct safety margin from the vehicle ahead: the circle becomes a yellow ellipse or a red triangle to indicate too high a speed or too short a safety margin, respectively. For this function, the onboard electronic system is coupled, among other things, with the proximity regulating radar and traction control systems.

A second display is located in the upper part of the center console. Among other things, it shows adjustment instructions for the air conditioning and the navigation system. During a refueling stop, the driver is also informed whether tire pressure, engine oil level, coolant level, windshield washer fluid level or the lighting system need to be attended to.

It is noteworthy that the selection of additional functions is blocked for the driver on the move so as not to detract him from what’s happening on the road. The front passenger, by contrast, has unimpeded access to all secondary information. To this end, the rotary actuator is capable of “feeling” whether it is touched by a left hand (front passenger) or a right hand (driver).

The Vario Research Car was the first research car from Mercedes-Benz featuring drive-by-wire technology, including for instance the electric actuation of steering and braking without mechanical connections between the steering wheel and the driver’s hands or between the brake pedal and the driver’s foot. However, the testing of this technology was not a priority task of the VRC – the focus was clearly on the variability of the bodywork. It is this variability that makes the car unique – and unsurpassed to this day.
Tags
vario