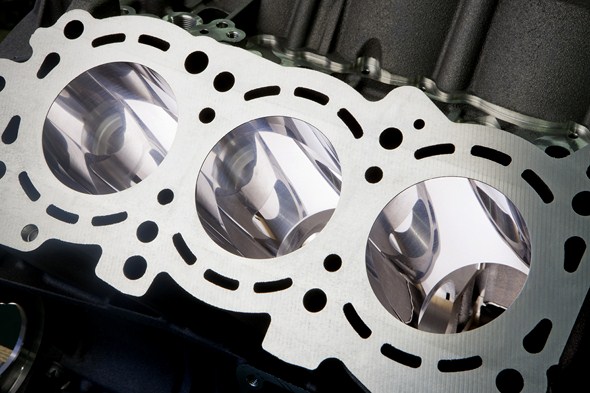 Stuttgart – After five years and use exclusively in AMG engines, twin‑wire arc spraying technology will now also be used in the series production of Mercedes-Benz diesel engines. Mercedes-Benz was the developer of what is now known as NANOSLIDE technology, in which twin-wire arc spraying is used to melt iron/carbon wires and spray them onto the cylinder surfaces of the lightweight aluminium crankcase with the help of a gasflow.

Very fine finishing of the resulting nano-crystalline iron coating creates an almost mirror-like, smooth surface with fine pores, which reduces friction and wear between the piston assembly and the cylinder wall. Other advantages include lower engine weight, less fuel consumption and lower emissions. This innovation from Mercedes-Benz has been successfully used in the 6.3-litre AMG engines since 2006.

Mercedes-Benz uses the collective term BlueEFFICIENCY to describe a whole range of different measures designed to reduce fuel consumption and emissions: sophisticated aerodynamics, weight-saving measures and intelligent control of ancillary units are a few examples. With NANOSLIDE technology, the world’s oldest automobile manufacturer is adding another innovation to this technology package.

It sets new standards in the production of cylinder linings. These help to ensure that the piston moves up and down within the cylinder with the least possible friction losses. Comparatively heavy grey cast-iron liners with a thickness of up to five millimetres are the current state of the art.

The NANOSLIDE procedure takes a new approach. Wires of iron/carbon alloy are melted in an electric arc, and the melted material is “sprayed” onto the cylinder wall by a gasflow, where it is deposited as a layered, ultra-fine to nano-crystalline coating.

The NANOSLIDE coating is then given an extremely smooth finish by a special honing process, after which it has a thickness of only 0.1 to 0.15 millimetres and has a mirror-like surface. The honing process also exposes pores in the material which are able to retain oil and thereby ensure optimal lubrication of the piston assembly. The result is not only low friction, and therefore greatly reduced mechanical friction losses compared to grey cast-iron cylinder liners (up to 50 percent), but also extremely high wear resistance. 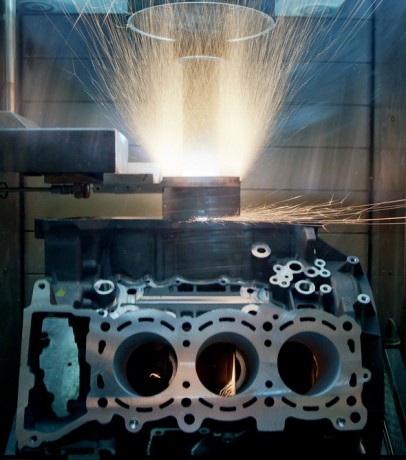 Mercedes-Benz has plenty of experience with its in-house development of NANOSLIDE technology. In July 2005 Mercedes-AMG GmbH presented a 6.3‑litre V8 which not only delivered outstanding performance figures, but was also the world’s first series production engine to feature cylinder walls with a twin-wire arc sprayed coating.

Since 2006 this cutting-edge cylinder coating technology has been a key component of all 6.3-litre AMG engines. The procedure has proved highly successful in more than 75,000 high-performance AMG engines to date, and meets all expectations. The specialist term “NANOSLIDE” has meanwhile become an accolade. The process involves numerous new inventions and ideas, and is protected by more than 90 patent families and over 40 patents.

In view of this positive experience, Mercedes-Benz is the world’s first manufacturer to have developed this technology further for use in a V6 diesel engine.

NANOSLIDE reduces the engine weight by 4.3 kilograms compared to the preceding engine, and brings an additional fuel saving of 3 percent. The V6 diesel engine in the ML 350 BlueTEC, for example, develops an output of 190 kW (258 hp) from a displacement of 2987 cc, and generates 620 Nm of torque.

Thanks to BlueTEC with AdBlue® exhaust treatment, this M-Class model already meets the emission values planned for 2014 in accordance with the Euro-6 standard, and as such is one of the world’s cleanest diesel vehicles. With a combined consumption of 6.8 litres of diesel per 100 kilometres, the ML 350 BlueTEC improves on the figures of its predecessor by 2.1 litres, or 24 percent. CO2 emissions have dropped from 235 to 179 grams per kilometre, not least thanks to the new NANOSLIDE technology. 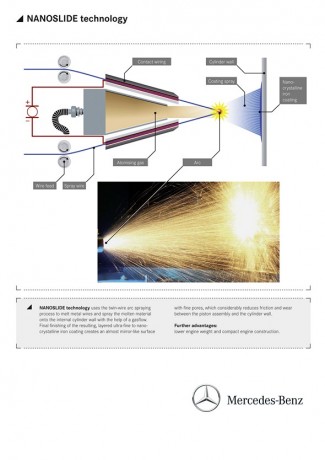