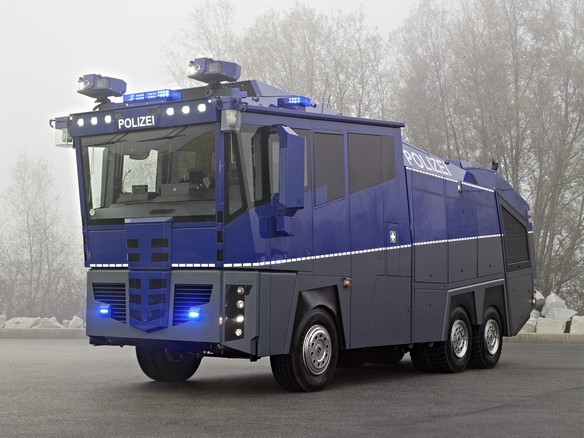 Stuttgart/Sankt Augustin – At the end of November the German federal police force took charge of the prototype of the “Water Cannon 10000” for the very first time. The official handover of the keys for the special vehicle, which is worth almost one million euros, was made by Julian Wagner, chairman of the board of Rosenbauer International AG, at a small ceremony attended by ministerial director Christoph Verenkotte, Head of the Federal Police Department at the Federal Ministry of the Interior, and Jürgen Schubert, Inspector of the Federal State Riot Police. The handover marks the beginning of what is expected to be a ten-year period of ongoing procurement, whereby the entire fleet of water cannons used by both the federal and state police forces in Germany is planned to be replaced.

The initial impressions of the vehicle are striking – there has never been a vehicle like this before. Even the external appearance is significantly different from the police water cannons used previously in Germany. “As far as we are aware this is the most modern vehicle of its kind in the world”, confirms Achim Friedl, Divisional Head at the Federal Ministry of the Interior for Federal Police and State Riot Police Technology and Logistics. As an experienced specialist, Friedl was responsible for gathering information on  designs and current procurement processes in a number of federal states, and also played a significant role in the implementation of the scheme as overall project manager. At the handover, ministerial director Verenkotte highlighted the fact that the prototype, which is the result of a significant development effort, has been completed on schedule – a complement appreciated by the attending represen­tatives of the general contractor, Rosenbauer, the Austrian company which successfully secured the contract following an international tender process. As the basis for the new Water Cannon 10000 – so named after its 10,000-litre capacity water tank – the company opted for the Mercedes-Benz Actros 3341 featuring all-wheel drive and a technically permissible gross vehicle weight of 33 tonnes. Even when fully kitted out and manned, however, the new “WaWe 10”, as it is known, does not quite reach this weight level, since its actual operational weight is around  31 tonnes. In addition to technical features and a reasonable price, the tender assessment process took into account reliability and the exper­tise of the participating tenderers, and also considered such factors as the lowest possible operating costs over what is expected to be a useful life spanning many years.

Almost ten metres long and 3.70 metres high, the special vehicle is driven by an environmentally friendly Euro 5 version of a V6 turbodiesel engine, producing 300 kW/408 hp and featuring BlueTec SCR diesel technology. The fact that the outline of the WaWe 10 bears such little resemblance to the familiar look of the Mercedes-Benz Actros, production numbers of which have now already exceeded half a million, is down to Rosenbauer having completely rebuilt the cab for the five-man crew. Just like the special-purpose body, it has been adapted for the specific functionality of this special deployment vehicle. The driver benefits from a convenient MercedesPowerschift automated transmission, while a Telligent braking system helps to ensure safe deceleration. The crew, comprising driver, commander, observer, and cannon operators, are accommodated in ergonomically designed working areas in the spacious cab, which also tilts on the chassis for maintenance purposes. Auxiliary heating and climate control help to maintain a pleasant interior temperature, even in the event of sustained deployment, and there is also a refrigerated compartment for storing refreshments.

The 10,000-litre water tank is housed in the centre of the aluminium body of the vehicle. To the left and right of this is the necessary additional equipment, mainly used for water intake from hydrants or open bodies of water, housed in lockable toolboxes. The pumping equipment – a Rosenbauer N 35 centrifugal pump with a rated output of 3500 litres per minute at 10 bar – is accommodated in the rear of vehicle. It is driven by a separate diesel engine, thus ensuring that the three pumps – two on the front corners of the cab, each with a flow rate of 1200 l/min, and one on the rear of the vehicle with a flow rate of 900 l/min – can be operated totally independently of actually driving the vehicle. Floor spray nozzles beneath  the vehicle are designed to protect the chassis against fire, while the cab and body roofs are also fitted with an automatic protection system. In addition to its main use, namely police deployment in the event of violent riots breaking out at demonstrations and large events, the WaWe 10 can also be used to back up the emergency services at disasters, for example for fire fighting or even for transporting drinking water.

The new WaWe 10 will gradually replace its predecessor, the WaWe 9, which is also entirely based on the Mercedes-Benz three-axle all-wheel drive chassis, and which in some cases is now already more than 20 years old. A total of 78 identical vehicles are expected to be brought into service by 2019 as part of a total order volume worth 75 million euros. Delivery of the first three series-produced vehicles is scheduled for 2010 following assessment of the prototype trial. Distribution of the new water cannon to federal and also state police authorities shall then be determined on a case by case basis according to the age and technical status of the vehicles awaiting withdrawal from service.