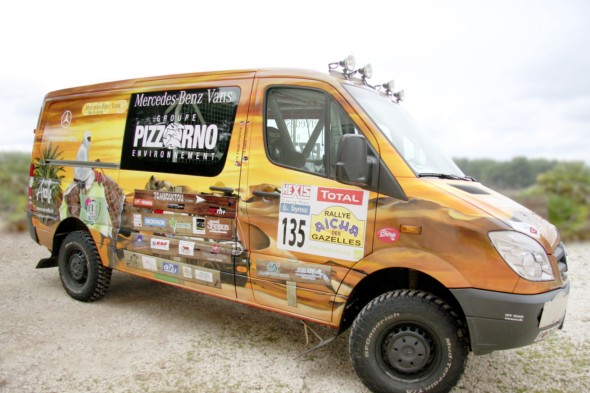 Stuttgart/Setes –  Bettina Singhartinger and Andrea Spielvogel, two female Daimler AG employees, left Stuttgart in their Mercedes-Benz Viano 4matic today to join the official lineup for the Aicha des Gazelles women’s rally. After a short sea-crossing from Sete, France to Tangiers, Morocco, followed by the team presentation and technical verification on 18 March, the Aicha des Gazelles Rally will start off and end in Essaouira on Morocco’s Atlantic coast on 27 March 2010. “I have enormous respect for the challenges to come,” says Andrea Spielvogel, who works in information technology. Her colleague Bettina Singhartinger, a communications employee, adds: “This is probably the greatest adventure I have ever let myself in for.” Another highlight awaits them even before the start of the rally: the ship with all the participants and equipment will be the very first to dock in the newly constructed harbor in Essaouira. The king of Morocco has also confirmed that he will be present to welcome the rally participants in person.

The “Aicha des Gazelles Rally 2010” is organised by women for women, and its patron is the king of Morocco. A total of 30 mainly African nations are taking part. The route covers a distance of almost 2500 kilometres, and there are seven stages. In contrast to other competitions of this kind, the key requirement of the Rallye des Gazelles is navigation using only maps,  coordinates and a compass – without the aid of GPS. It is not the fastest team that wins, but rather the team that finds the shortest route between the checkpoints in the given time. There are penalty points if a detour is taken, technical assistance is requested or any checkpoints are missed out. Overnight stops during the two marathon stages of the rally are spent in the desert. Helping each other is very much in the spirit of this rally, which has a humanitarian purpose. All the takings go to a charity which subsidises mobile clinics, orphanages and the construction of wells in Morocco. The “Gazelles” also bring many tons of donated items to Morocco with them each year, and these are distributed during the rally.

Vehicles from Mercedes-Benz were already successful in this rally last year. In the 19th event of this series, the world’s only rally for women, the two professional drivers Jeanette James and Anne-Marie Ortola achieved first place in their category in a Mercedes-Benz Viano 4matic. This Irish/French duo also won the separate ranking for first-time participants in their class. This year the two professionals will be driving for Daimler again – this time in an all-wheel drive Mercedes-Benz Sprinter 4×4. 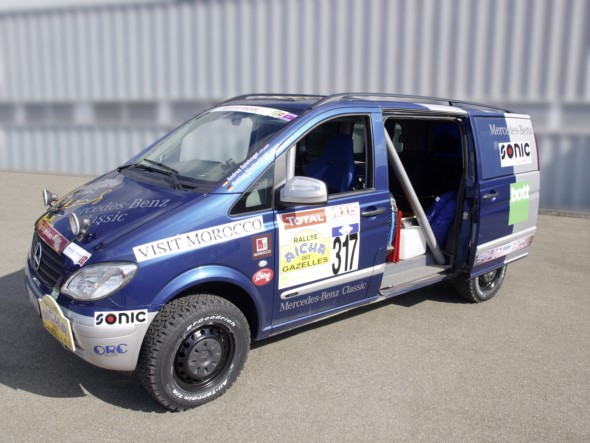 The opportunity for the two amateurs Andrea Spielvogel and Bettina Singhartinger to be at the starting line is due to an in-house competition organised by Daimler AG. “Lady racing drivers wanted!” – this was the online announcement in January with which Daimler invited its female employees to apply for a place in the Aicha des Gazelles desert rally. More than 200 responded, and twelve of these were eventually shortlisted. Andrea Spielvogel and Bettina Singhartinger emerged as the final winners.

The Viano 4matic and Sprinter 4×4 as rally vehicles

Andrea Spielvogel and Bettina Singhartinger will drive a Mercedes-Benz Viano 4matic for Daimler in this year’s rally. This all-wheel drive, standard specification vehicle was already used in last year’s rally, and has only been given a complete technical overhaul and minor racing modifications for this year’s event. Items in the list of “extras” for the 110 kW (150 hp) four-cylinder diesel Viano include a rollover cage, bucket seats, harness seat belts,  an aluminium underbody guard and special sand tyres. Bettina Singhartinger: “Last year the team won the event in this vehicle, and the Viano stood up to the challenge with no problems.”
The second rally vehicle, a Mercedes-Benz Sprinter 4×4, will be driven by Ortola and James. This Sprinter panel van is powered by the standard three-litre diesel engine developing 140 kW (190 hp), and has an automatic transmission, all-wheel drive available ex factory, and open centre and inter-axle differentials.