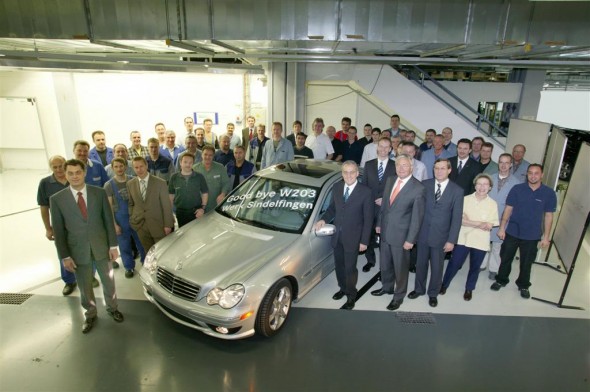 Stuttgart/Sindelfingen,  With only a few weeks left to go until the world premiere of the new Mercedes-Benz C-Class, the last 203 series sedan is rolling off the assembly line today at the Sindelfingen plant. The milestone vehicle, an iridium silver C 230 sedan, is destined for a customer in the U.S. The production of the last car of the series provided Vice President and Manager of the DaimlerChrysler plant in Sindelfingen: Since the series was launched in 2000, the employees at the Sindelfingen plant have produced about 630,000 units of the sedan for customers all over the world, he said. Every single vehicle is an expression of their expertise and their attention to detail. I would like to thank all of the employees for making the C-Class what it is today: one of the most popular automobiles in the upper mid-range segment.”
As the successor of the 202 Series, the W 203 sedan continued the success story of its predecessor by becoming the best-selling C-Class in the company’s history.