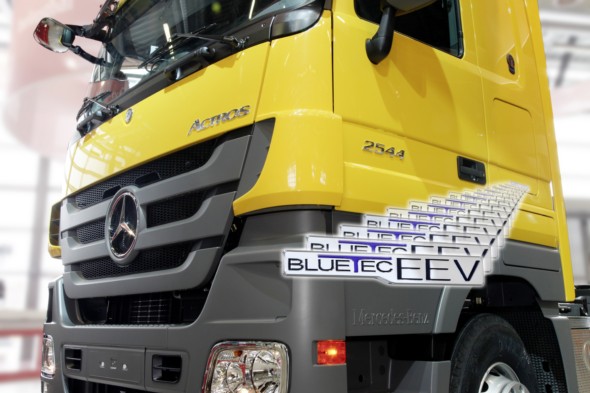 EEV (Enhanced Environmentally Friendly Vehicle) is a classification used for engines which comply with an even more stringent exhaust emission standard than Euro 5. The EEV standard reduces particulate emissions by roughly a further one third compared to the already stringent Euro 5 limits. In extending its truck range, Mercedes-Benz will be gradually introducing EEV versions in certain output classes of the Mercedes-Benz Actros, Axor and Atego up to July 2010. BlueTec EEV is already part of the extended specification for the Mercedes-Benz Econic from January 2010.

Incentives are offered for this technology in some European countries. The engines in the OM 920 and OM 501 series have been developed even further for this purpose. Mercedes-Benz commercial vehicles equipped with this feature can be recognised by the additional “BlueTec EEV” model plate.

As a significant product enhancement and to improve value retention even further, BlueTec EEV is included in the extended standard equipment of the Mercedes-Benz Econic, which is frequently in service as a municipal or distribution vehicle in environmentally sensitive inner-city areas. This applies to both the 210 kW (286 hp) and the 240 kW (326 hp) diesel engine variants.

The technology for compliance with the voluntary EEV emission standard is based on the new BlueTec 5 diesel ­technology from Mercedes-Benz, which involves the installation of additional technological features. In the EEV version of the OM 501 LA engine, a change to the engine’s characteristic map has led to a reduction in particulate emissions by more than 30 percent.

To this end the injection nozzle pressure was increased, and the injection nozzle/line/attachment system was redesigned. Substantial technical modifications were made to the OM 920 LA engine series, of which EEV versions can be ordered in all available output classes as the OM 924 LA EEV and OM 926 LA EEV. Additional exhaust gas aftertreatment is not necessary. In terms of maintenance, operating life, fuel consumption, weight and installation space, the EEV solution adopted for Mercedes-Benz trucks is at the same level as with the well-proven BlueTec 5 technology.

Subsidies for EEV technology: in Germany, EEV is subsidised for trucks over 12 t permissible gross vehicle weight under a government-approved support programme operated by the KfW Bank (redefined figures will apply from spring 2010 in Germany) In the Netherlands there is also a subsidy available under a government support programme. A subsidy in the form of a ten percent reduction in motorway toll charges is also granted for EEV vehicles in Austria. Customers whose Actros is already equipped with an NOx sensor (from autumn 2007) are able to retrofit the EEV technology, thereby also benefitting from the reduced toll charges.