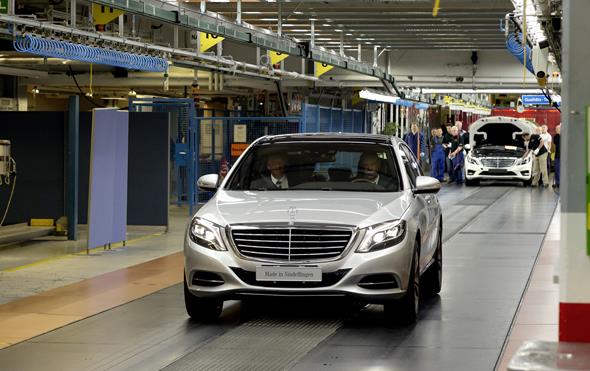 Sindelfingen, Germany – Some 40 years after the S-Class made its debut, employees at the Mercedes-Benz Sindelfingen plant have produced the first customer vehicle in what is now the sixth generation of this model series. “2013 is the year of the S-Class. We are driving forward our model offensive in the luxury segment.

The new S-Class is opening up additional opportunities for us in the market,” says Dr Dieter Zetsche, Chairman of the Board of Management of Daimler AG and Head of Mercedes-Benz Cars. 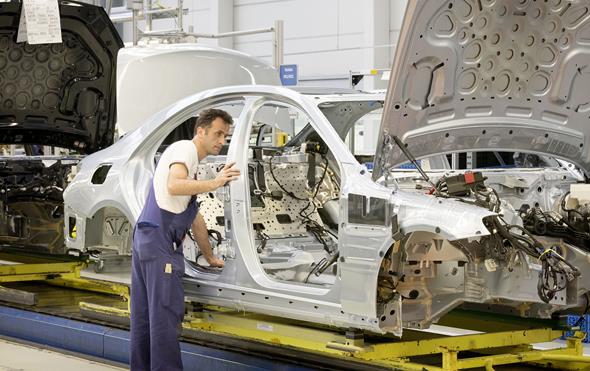 Andreas Renschler, Member of the Board of Management of Daimler AG, Manufacturing and Procurement Mercedes-Benz Cars & Mercedes-Benz Vans: “The S-Class, with its many innovations, is the standard-bearer of automotive progress. And our production is breaking the mould: we made it fit for the future by implementing numerous new processes for manufacturing the S-Class.

” All variants are produced in an efficient and flexible process on one assembly line. And the range of optional extras is so varied that it is unlikely any S-Class will be entirely identical to another over the lifecycle of the vehicle. 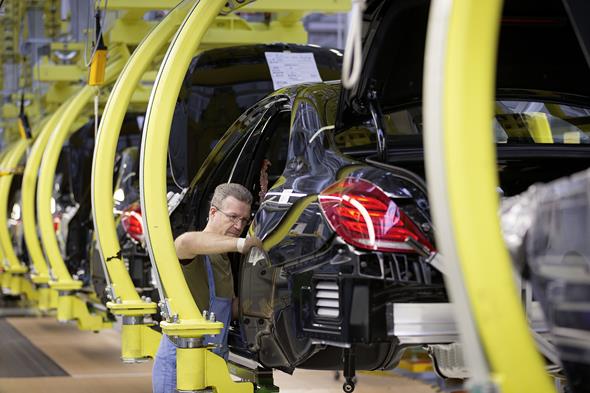 All these investments show just how strongly the Sindelfingen site and the biggest employer in the Stuttgart region are focused on future requirements. 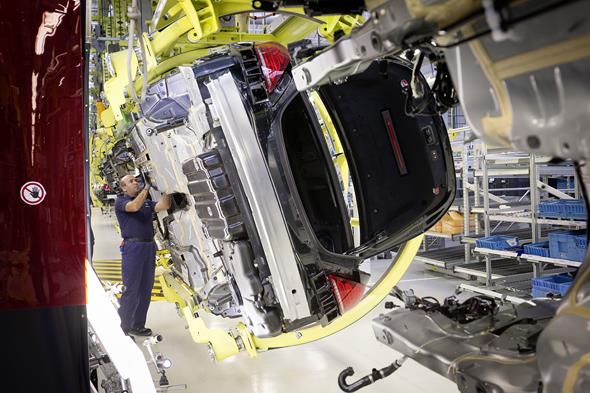 Employees have been undergoing extensive training in preparation for production start-up. New technologies are being used in the body shop to join cast aluminium alloys. For the aluminium lightweight roof, which is going into large-scale series production for the first time, a new manufacturing process has been developed: the roof and steel body will now only be joined once they have been through the paint shop together.

Among the innovations in the production logistics is the ‘pick-by-projector’ system. This helps employees to pick parts by signalling to them which storage unit contains the component that is required. 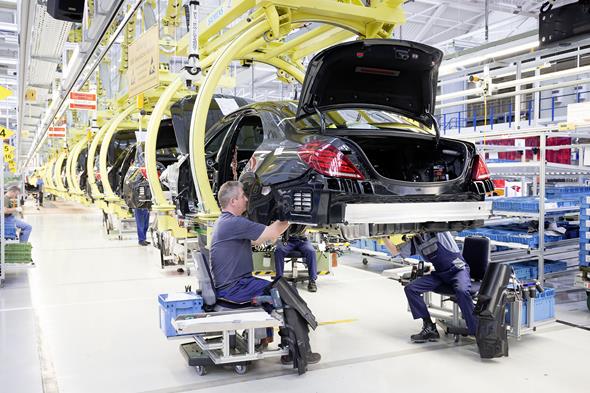 Energy efficiency was a factor as far back as the planning stage for the production processes. Energy consumption per vehicle has been lowered by around 20 percent, in part through improvements to the building engineering.

Customers purchasing a new S-Class can choose from various seat variations in the rear that offer numerous settings. Behind the rear seats is a back wall module that is preassembled on its own line. As part of an ergonomic working environment, employees are able to mount the control units on the back wall module at a height that is most comfortable for them.

A lifting device does the job of transporting the component into the vehicle, taking the strain off the workers.

In 2012 the S-Class was once again the world’s best-selling luxury sedan. And because it was still in very high demand right up to the point that it was discontinued, the production switch-over has been integrated into the current assembly process.

Since the start of production in 2005, more than half a million premium-quality S-Class models have rolled off the assembly line in Sindelfingen. For this new S-Class generation, there will be now three new models in addition to the short-wheelbase and extended wheelbase variants and the S-Class coupé. 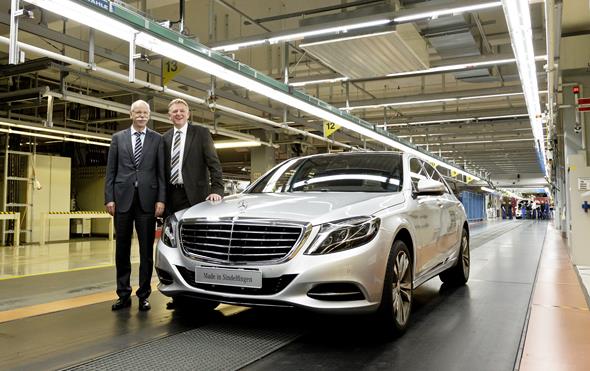 “All of us here at Sindelfingen are enormously proud that the S-Class is made exclusively at our plant. We are able to draw on many years of experience making vehicles in the high-end, luxury class, and we do our best every day for our customers from around the world.

In order to meet demand for the new S-Class in the quickest time possible, we will be working without a break right through the summer months,” says Dr Willi Reiss, Head of the Mercedes-Benz plant Sindelfingen.

The Sindelfingen plant’s workforce is demonstrating once again that our top-of-the-line product can efficiently and economically be built in Germany and delivered around the globe.

The specific advantage of our operations in Sindelfingen – the close collaboration of development, production planning, and local production – is significantly contributing to this success. Thus, the S-Class is securing many jobs in Germany – also within the automotive supplier industry.”

About the new Mercedes-Benz S-Class

Through the three development focuses of ‘Intelligent Drive’, ‘Efficient Technology’ and ‘Essence of Luxury’, the new S-Class is pushing the boundaries of technology on a number of levels. The S-Class represents the pinnacle of engineering achievement not only for Mercedes-Benz but for the automotive industry as a whole. 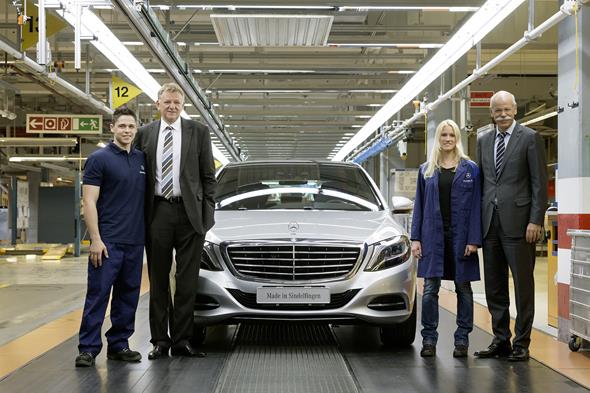 Whether seats or air conditioning, function or design, infotainment or comfort and safety in the rear – new ideas, their meticulous implementation and the premium appeal of the vehicle underpin the aspirations of the engineers for this top-of-the-line Mercedes-Benz model – and for themselves.

The same applies to safety: what began ten years ago with PRE-SAFE and continued its evolution with DISTRONIC PLUS is today leading to a new dimension of driving that unites comfort and safety. Mercedes-Benz calls this ‘Intelligent Drive’.

A multitude of new systems makes the new S-Class even safer and more comfortable. Within ten years, thanks to ‘Efficient Technology’, Mercedes-Benz has nearly halved fuel consumption in the 150kW power category to 4.4 litres per 100 kilometres.

A new generation of the S-Class has once again brought with it a greatly improved drag coefficient, which at 0.24 is now the standard-bearer in its segment. Further aerodynamic fine-tuning enables the S 300 BlueTEC HYBRID to go one step better with a top Cd rating of 0.23. 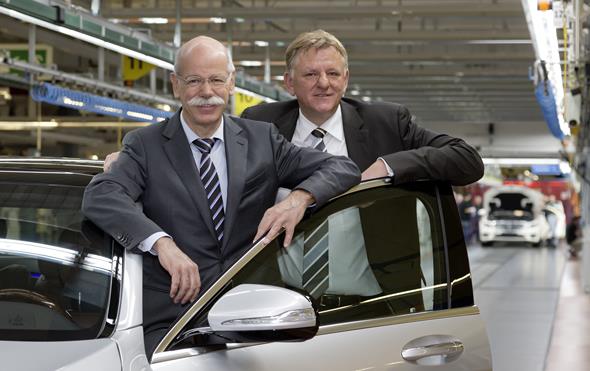 The new model is the world’s first series-production car to no longer feature bulbs – only LEDs. This, too, is lighting the way to the future. The radiator grille of the new S-Class is symbolic of its confidence and ambition to lead. Bigger than ever before, it is more upright and has a pronounced three-dimensional look. 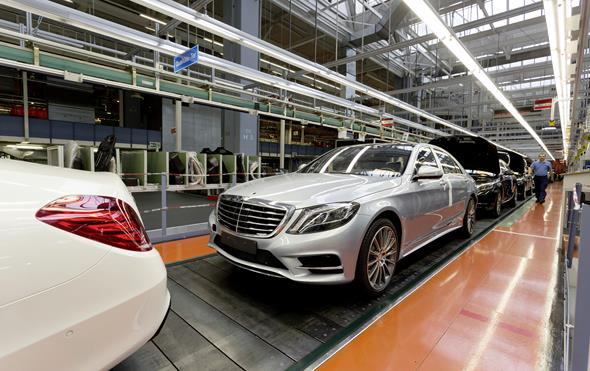 About the Mercedes-Benz Sindelfingen plant

The Mercedes-Benz Sindelfingen plant is Daimler AG’s largest production facility and is the centre of competence for the high-end, luxury segment within the global production network of Mercedes-Benz Cars. Last year over 22,000 employees built more than 420,000 cars in the Mercedes-Benz C-Class, E-Class and S-Class ranges as well as the CL, CLS, and CLS Shooting Brake, and the SLS AMG.