The glamour that accompanied the products of Daimler-Benz AG in the late 1920s and early 1930s is attributable in large part to the successes of the legendary S, SS and SSK supercharged sports cars.

Still today, the Mercedes-Benz brand benefits considerably from the charisma of these unique high-speed cars, which is almost without parallel in the history of the automobile.

In 1927, the “S” model – the “S” stood for “Sport” -ushered in the era of a new high-performance sports car that was also suitable for use at motor sport events.

The dimensions of the “K” chassis were retained as a basis for developing a new chassis. More pronounced offsets on both the front and rear axles made it possible for the frame to be lowered significantly.

The engine was set back 30 cm to the rear, which improved the axle load distribution, in addition to making it possible for the large six-cylinder power plant to be installed significantly lower in the vehicle. 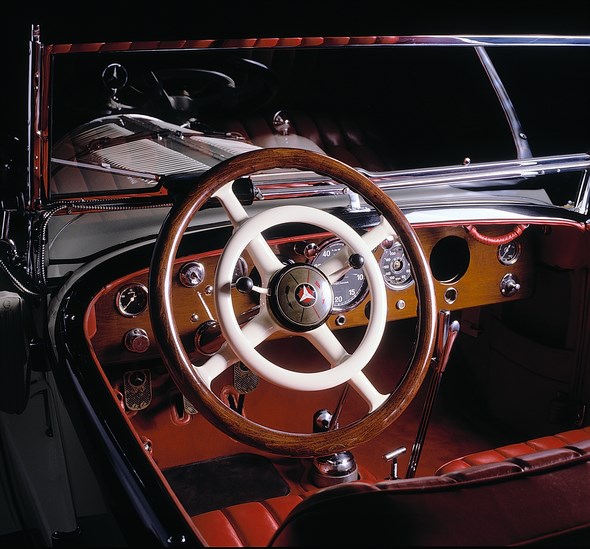 Nor did efforts to give the vehicle as low a bodyline as possible stop at the profile of the pointed radiator. Instead of the eight blocks in the “K”, the radiator now had only seven blocks stacked on top of each other.

The engine, too, underwent some radical modifications. It was also given a design code that conformed to the internal nomenclature introduced in the wake of the merger. It was now called M 06.

The bore was widened by 4 mm, which increased the displacement to 6.8 litres. This necessitated extensive changes to the engine block. To create the necessary space for the larger cylinder liners, these were converted from dry to wet. 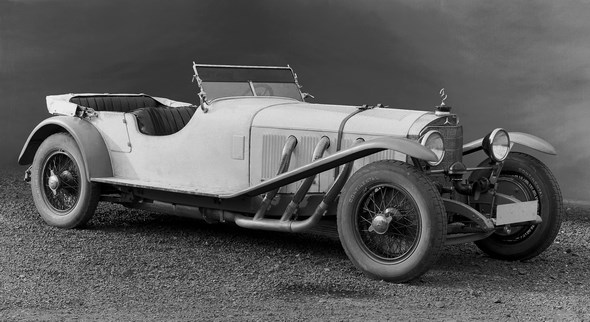 As with the “K”, the “S” model also featured dual ignition with two spark plugs per cylinder, one of which was supplied by the conventional high-voltage magneto ignition and the other by battery ignition.

In combination with a twin-carburettor system, the new sports engine had an official power rating of 180 hp with supercharger. Works engines with higher compression ratios delivered up to 220 hp when run on a benzole mixture.

The first outing of the “S” was in the inaugural race on the Nürburgring in June 1927, where it carried Rudolf Caracciola and Adolf Rosenberger to finish first and second place respectively.

Caracciola, who was later to become Daimler-Benz’s most successful racing driver, recorded an average speed of 101.1 km/h over a distance of just under 360 km.

Almost to the day exactly three months later, Rudolf Caracciola posted an average speed of 194.6 km/h in a sprint race in Antwerp. With this, the “S” had delivered unambiguous proof of its status as a high-speed sports car.

It was officially added to the sales programme in April 1927, together with the “K”. Under the new category of “Special Sports Cars”, the price list included the four-seater versions of both models at prices of RM 26,000 and RM 30,000. 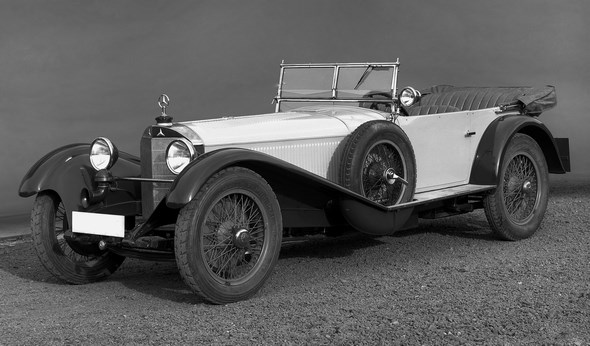 At that time, the “S” was still to make its debut, being included in the price list as “Model 1927”. This situation persisted until October 1927, when, in addition to the four-seater sports variants, chassis-only versions also became available – at prices of RM 20,750 for the Model “K” and RM 26,000 for the Model “S”.

In 1928, the power output was further increased. The conversion to wet cylinder liners had created sufficient space to widen the bore by a further 2 mm to 100 mm, resulting in a displacement of 7.1 litres. 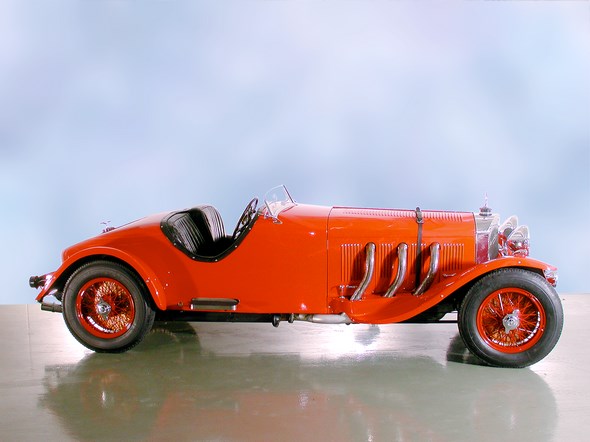 It can be regarded as certain, however, that, owing to the higher compression and corresponding tuning, the specified supercharged output of 200 hp was exceeded. The crankshaft with its four main bearings was provided with a vibration damper.

A racing camshaft was developed for race track use, increasing the power output to 170/225 hp. More powerful superchargers with larger rotor blades were also on hand.

An output of 275 hp was produced with the smaller of the two racing superchargers. This supercharger version as well as the racing camshaft were also available to privateers. 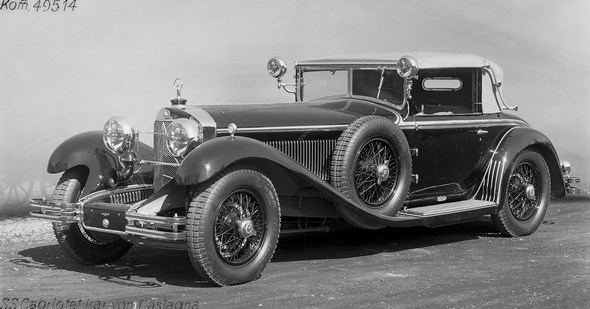 The 7.1‑litre engine was ready for use in mid-1928 and was installed in the “S” chassis. Powered by the new engine, the racing sports car was given the designation “SS” – for Super Sport.

On 29 June, the vehicle underwent its baptism of fire in the Bühler Höhe hill-climb race, which was held as part of the Baden-Baden Automobile Tournament and was won with ease by Rudolf Caracciola.

More spectacular was the next outing in the German Racing Car Grand Prix, which was held on the Nürburgring on 15 July. A triple triumph instantly made clear what the “SS” could do.

This was followed by numerous further racing successes, even before the “SS” was added to the sales programme in October. The “S”, chassis production of which was finally phased out in September 1928 after a run of 146 units, continued to be included in the price list until the beginning of 1930.

While the “S” model had been designed mainly with a view to its suitability as a racing car, the “SS” was, despite the increased power of its engine, intended primarily as a Gran Tourismo of the kind we know today.

This is made evident, for example, by the radiator, which, with its eight blocks, was restored to the same height as in the Model “K”, thereby permitting a higher bodyline than in the “S”.

This was underscored, albeit not from the outset, by the available choice of bodies. Initially, apart from the chassis-only version, there was just the four-seater sports car. 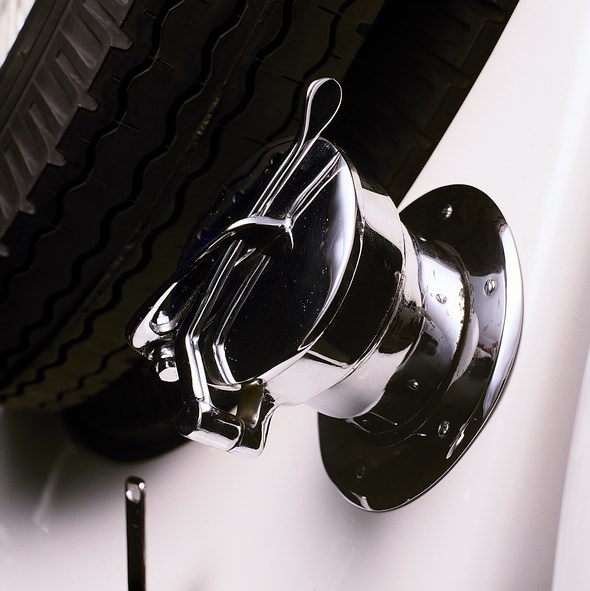 At the end of 1929, however, the range was extended to include a four-seater special convertible costing RM 44,000.

In September 1932, the line-up was further augmented by a two-seater special convertible, which was available also as a roadster. From November 1928, 111 units of the “SS” were manufactured in total, the lion’s share of which, 101 units, had been produced by the end of 1930. A further ten vehicles followed by September 1933. 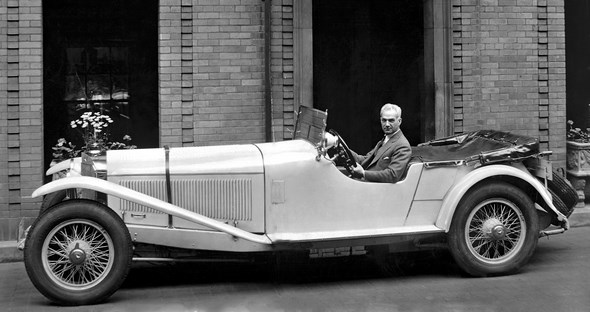 The “SS” was included in the price lists until July 1935.

The legendary “SSK” – the model designation stood for Super Sport Kurz (Super Sport Short) – was built for hill-climbing. Since short, manoeuvrable vehicles are at an advantage in such events, the “S” chassis was shortened in mid-1928 to a wheelbase of 2950 mm.

The reduced chassis was married to the new 7.1‑litre engine, and the “SSK” was born. Given its origins, this means that the “SSK” should really have been called the “SK”. On the other hand, the higher-displacement engine underscored its kinship with the “SS”, thus prompting the “SSK” designation.

Despite being equipped with the 42 mm lower radiator borrowed from Model “S”, the “SSK”, just like the “SS”, sported the newer version of the trademark: a single white enamelled star inside laurel wreath on a blue background.

In 1927, on the other hand, the “S” had been launched with two unwreathed stars on either side of the tip of the radiator, and it was to retain this former, pre-merger brand emblem through to the end of its production run. However, “S” vehicles delivered from December 1928 onwards sported the same centrally positioned badge as the “SS” and “SSK” models.

Rudolf Caracciola having driven this racing car to effortless victories not only in the Gabelbach race at the end of July but also at Schauinsland and Mont Ventoux in August, it was decided in Untertürkheim to build a small batch of these “production cars” that had been designed for use on the race track. 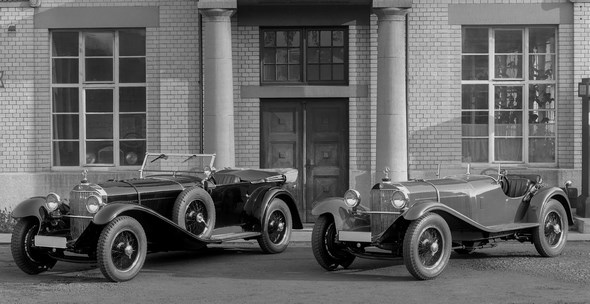 The “SSK” was added to the sales programme together with the “SS” in October 1928. In the ensuing period, both models, but mainly the “SSK”, not only figured prominently in the racing schedule of the Daimler-Benz works team, but were also used with great success by numerous privateers. 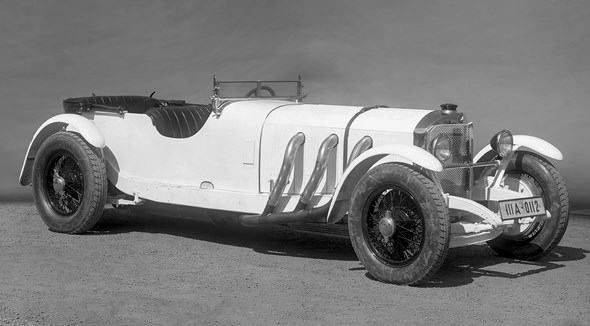 Yet not every client had motor sport in mind when they bought an “SSK”. Some wealthy, sportily inclined customers ordered a chassis ex factory and had it fitted with a convertible body to allow them to use their “SSK” as a high-speed sports car for everyday motoring. 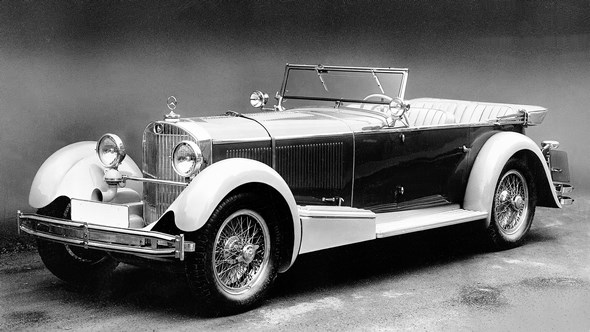 Engine designer Albert Heess fully exploited the available potential of the engine for the works team’s racing cars. An output of 310 hp was measured on the test bench with the larger of the two competition superchargers – referred to within the company as the “elephant”. 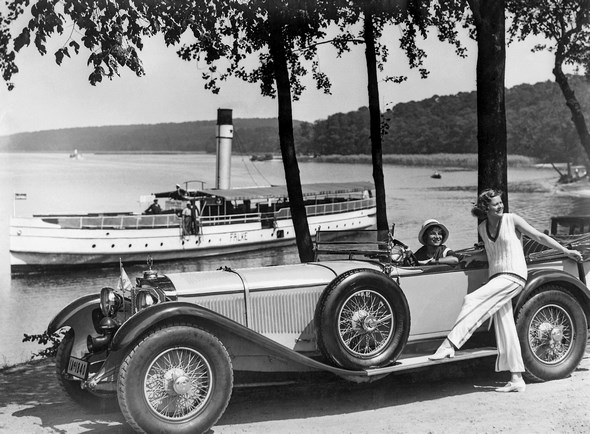 This supercharger was designed for short-distance applications, e.g. hill climbs, and was capable of continuous operation, whereas normal superchargers cut in only when the accelerator pedal was depressed beyond an activation point. 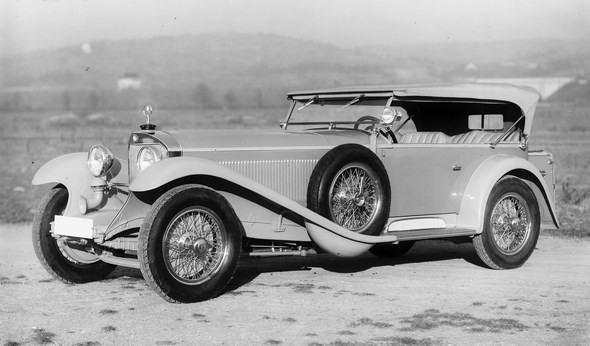 In this variant, the driver was able to activate and deactivate the supercharger via a linkage that was operated by means of a lockable lever underneath the steering wheel. 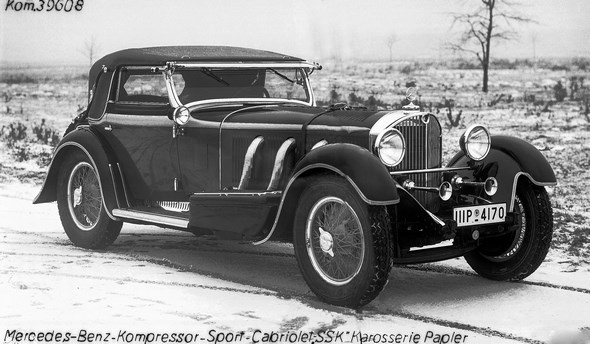 The fourth and final S-series model was the “SSKL” (Super Sport Kurz Leicht – Super Sport Short Light), an outright competition vehicle, just a few units of which were built in 1931 and which was not included in the official sales programme.

Weight-reducing perforations, some of which extended over the entire frame, were used to reduce the weight by 125 kg. Some “SSK” models may also have been converted subsequently to “SSKL” models. 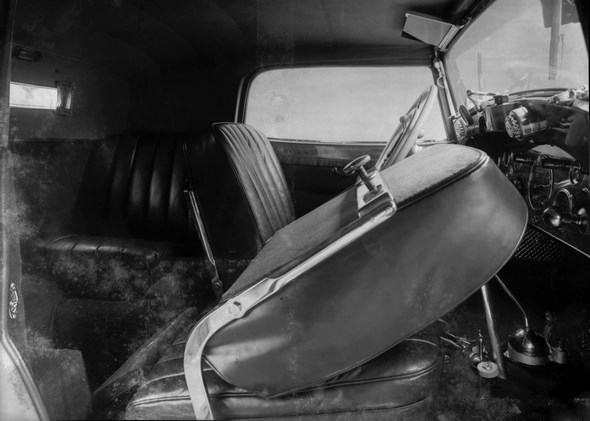 Apart from the fact that conversions were not always systematically documented, the picture is further complicated by the additional fact that the model designation “SSKL” was not commonly used at the time. In the order books, “SSKL” vehicles built for works use were entered as “SSK, model 1931”, and, in the official statistics for 1931/1932, the weight-reduced version was always referred to as “SSK”.

Some press reports from 1932, however, used the now generally customary designation “SSKL”. 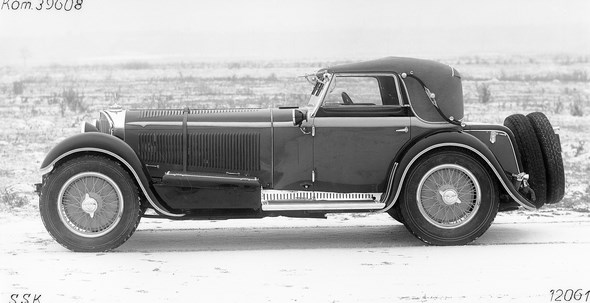 Not just in the case of the “SSKL”, but also in relation to the other S-series models, it is extremely difficult to obtain a precise record of the production numbers, since, already at that time, chassis were being shortened and provided with different engines.

Especially as far as such exclusive small-volume models are concerned, therefore, the production statistics cannot be regarded as a definitive and irrefutable statement of fact. 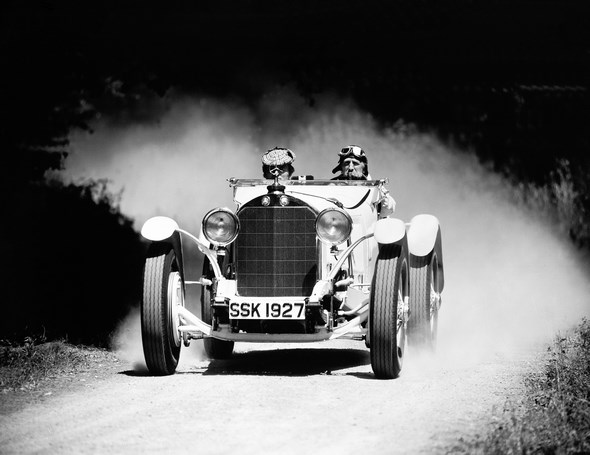 Driving an “SSKL”, Rudolf Caracciola was the first non-Italian to win the “Mille Miglia” as well as numerous other races, which helped him win the 1931 European Hillclimbing Championship.

Hans Stuck in an “SSKL” became the 1932 International Alpine Champion and Brazilian Hillclimb champion. It was a special “SSKL” to which Manfred von Brauchitsch owed his victory in the Avus race of May 1932.

The aerodynamics expert Baron Koenig-Fachsenfeld had persuaded the young racing driver to have his “SSKL” fitted with a streamlined body he had designed. The light-alloy body was manufactured by Vetter in Cannstatt and fitted to on von Brauchitsch’s car -just in to complete the journey to Berlin under its own power for the start of practice. 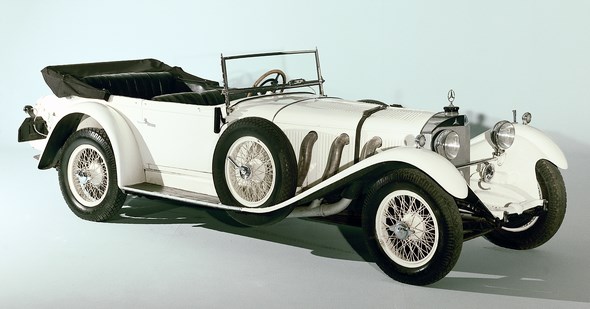 Manfred von Brauchitsch was able to win the race simply because his streamlined car, which he affectionately dubbed the “cucumber” on account of its shape, had 25% less drag, making it 20 km/h faster than a normal “SSKL”.

Second place went to Rudolf Caracciola, who, in 1932, drove not for Daimler-Benz but for Alfa Romeo. Owing to the great pressure of time, the streamlined body of the “cucumber” was denied its finishing coat of paint.

Consequently, the unusual racing car made its way onto the grid sporting an unpainted silver body, which is why it is sometimes jokingly referred to as the first Silver Arrow. 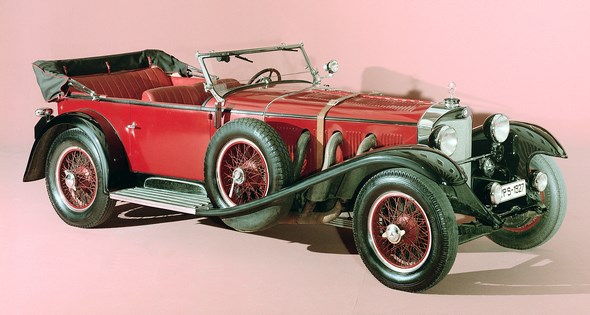 The “SSKL” was the glittering highlight of the legendary S‑Series, which was to decisively shape the image of the Mercedes-Benz brand. In 1934, three years after the “SSKL” had made its debut, it was time for the product line-up at Daimler-Benz to be reshuffled.

From now on, success on the race track was in the hands of the new Silver Arrows, which, of course, were not suitable for everyday motoring and remained beyond the reach of even well-heeled customers.

As far as the mass-produced vehicles of Daimler‑B enz AG were concerned, it was the newly launched 500 K that, more than any other model, embodied the successful synthesis of sportiness and elegance. 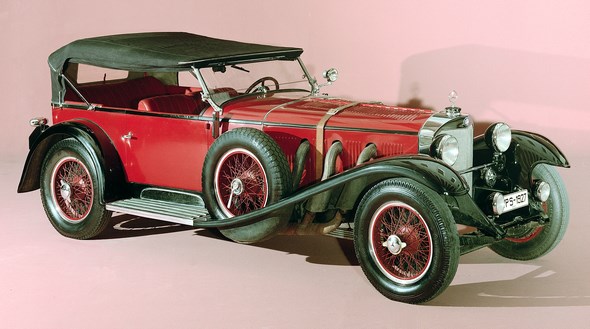 From mid-1927 to the beginning of 1933, the S‑series models had fulfilled both roles in equal measure, demonstrating their credentials as genuine all-rounders capable of sustained success on both fronts.