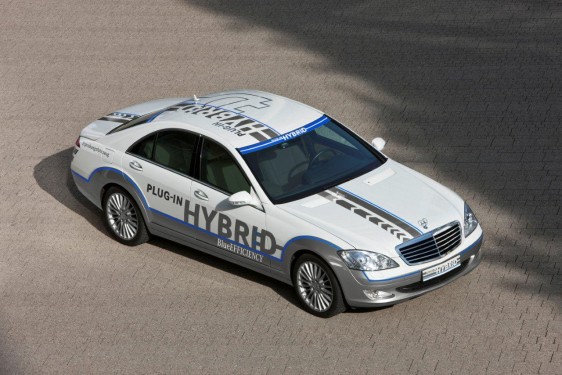 The luxury class on the road to the three-litre car

Shortly after the successful market launch of the S 400 HYBRID, currently the most fuel-efficient luxury-segment saloon with a petrol engine, Mercedes-Benz will be presenting the first “three-litre car” in the premium class – the Vision S 500 Plug-in HYBRID – at the 63rd IAA in Frankfurt. The technology vehicle will display the future of Mercedes-Benz’ modular set of hybrid systems. The Vision S 500 Plug-in HYBRID can drive for up to 30 kilometres solely on electricity and therefore without producing any local emissions. The efficient drive system combined with the CO2 bonus for the battery-electric driving mode enables the vehicle to achieve a certified consumption of only 3.2 litres of petrol per 100 kilometers. With CO2 emissions of only 74 grams per kilometre in the NEDC (New European Driving Cycle), the experimental vehicle developed in Sindelfingen demonstrates the long-term viability of future S‑Class generations. The outstanding values are made possible by the combination of a plug-in hybrid with the efficiency-boosting BlueEFFICIENCY measures. At the same time, the Vision S 500 Plug-in HYBRID has all of the strengths that are typical of the S‑Class: top comfort, outstanding safety and masterful performance. The drive system in the concept car consists of three main components: a powerful V6 petrol engine with a next-generation direct injection system, a 44 kW/60 hp hybrid module and a lithium-ion battery with more than 10 kWh of storage capacity that can be recharged at charging stations. The Vision S 500 Plug-in HYBRID accelerates from 0 to 100 km/h in 5.5 seconds. 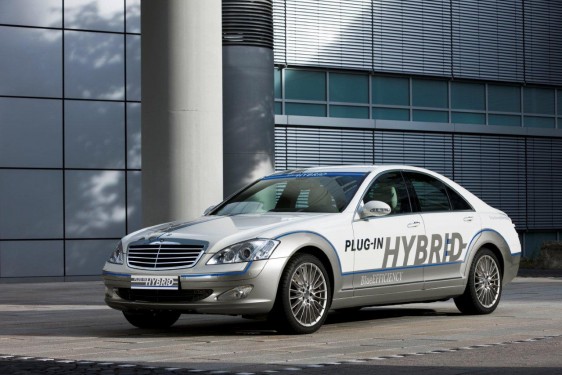 “The Vision 500 Plug-in HYBRID is a new milestone on our path toward zero-emission mobility,” says Dr. Dieter Zetsche, Chairman of Daimler AG and Head of Mercedes-Benz Cars. “It is a luxurious and safe S‑Class that offers superior driving performance while at the same time consuming less fuel than current compacts. All of this shows that our top models will also be able to combine automotive fascination with responsibility for the environment.”

“Although it will take some time before this model can go into series production, our engineers will be working full steam to carry out the necessary integration measures and ensure that all components can meet the tough everyday demands required of a luxury long-distance saloon,” says Dr. Thomas Weber, member of the Board of Management of Daimler AG with responsibility for Group Research and Mercedes-Benz Cars Development. “We’ve already got all the key technology we need for such a dream car, which is why I see it being included in the next generation of the S‑Class. The important thing now is that our development work be accompanied by the establishment of a full-coverage infrastructure that will allow the potential of this innovative drive system to be fully exploited.”

The electrical drive components of the Vision S 500 Plug-in HYBRID demonstrate the versatility of Mercedes-Benz’ intelligently organised set of hybrid systems, which has a widely scalable range of performance. The hybrid module’s design does not differ much from the compact, disc-shaped 15-kW electric motor of the S 400 HYBRID, even though it is three times as powerful. As a result, the hybrid module can be elegantly incorporated into the housing of the 7G-TRONIC seven-speed automatic transmission, allowing this model variant as well as the S 400 HYBRID to retain the S‑Class’ spacious interior. Future model generations will orient themselves on this system architecture.
Whereas the extremely compact lithium-ion battery in the S 400 HYBRID (0.9 kWh) can be housed in the vehicle’s engine compartment, the significantly higher-performing lithium-ion unit in the Vision S 500 Plug-in HYBRID (over 10 kWh) requires more installation space. The battery is located behind the rear seats in the boot. The lithium-ion battery’s location above the rear axle provides crucial benefits, since it ensures that the vehicle has a balanced weight distribution and that the petrol tank remains adequate for long-distance cruising. In addition, the protected position of the tank ensures it is as safe as possible during crashes. 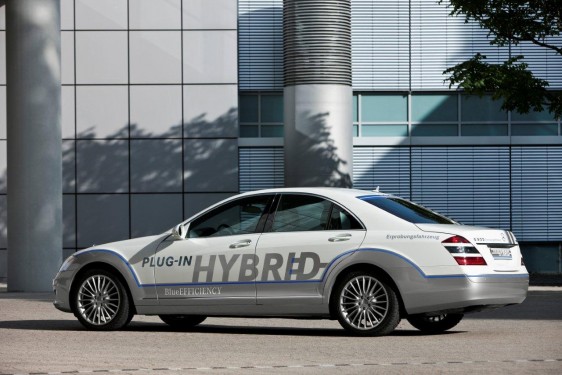 Additional clutch decouples the hybrid module and combustion engine
In accordance with the modular concept, the powertrain design for the Vision
S 500 Plug-in HYBRID is basically the same as that for the S 400 HYBRID. One system-specific attribute is the presence of an additional clutch integrated between the combustion engine and the electric motor. This device decouples the two components in the pure electric drive mode, thereby ensuring the highest level of efficiency in the latter. Moreover, because it is fully integrated into the vehicle’s converter housing, the clutch does not take up any additional space.
Electrical outlet as a filling station: Powerful plug-in battery
Another key difference between the S 500 Plug-in HYBRID and conventional hybrids involves the plug-in battery, which can be charged at charging stations, thereby enabling the S 500 Plug-in HYBRID to travel up to 30 kilometres on electric power. The rapid charge cycle takes less than 60 minutes with a charging capactiy of 20 kW. A standard charge cycle at a conventional household socket with 3,3 kW takes about four-and-a-half hours to recharge a completely discharged battery.
The model is also equipped with a compact onboard charger: Housed behind the side boot wall, this unit controls the recharging process and is protected against short circuits, voltage reversal, and voltage surges. The charging system also protects the battery by monitoring voltage, the charging level and charging time. The total weight of the electrical components in the current experimental vehicle is 215 kilograms, whereby the lithium-ion battery weighs approximately 130 kg. That’s much less than a conventional NiMH battery with the same capacity, as the weight of such batteries ranges from 180 – 200 kg.
The vehicle’s hybrid module also provides additional energy when the car is in motion through regenerative braking – the recovery of energy when braking. Here, the clutch enhances efficiency as well, as it enables complete energy regeneration without engine drag losses.

Range of up to 30 kilometres with all-electric driving
The high-performance battery and the 44 kW/60 hp hybrid module enable the vehicle to drive up to 30 kilometres purely on electricity. That is completely sufficient for many trips within cities, where the Vision S 500 Plug-in HYBRID is quick and very comfortable without producing any local emissions. The petrol engine automatically adds its power to that of the electric motor when travelling at high speeds or driving up steep inclines. Before closing the clutch in such cases, the vehicle electronics synchronises the engine speed with the hybrid module’s rotational speed so that the engine is activated extremely smoothly without the driver noticing.
What’s more, the hybrid module’s sophisticated interplay with the combustion engine enables numerous additional functions that positively impact fuel consumption, emissions and vehicle agility. Like the system employed in the
S 400 HYBRID, the hybrid module in the Vision S 500 Plug-in HYBRID also comes with the ECO start/stop function. This feature also enhances safety and driving pleasure because of its boost effect, which has the electric motor providing powerful support to the combustion engine during the high-consumption acceleration phase. This system has already proved its practical viability in a slightly different configuration in the Mercedes-Benz Sprinter.
Extensive electronic safety and control components
The lithium-ion battery not only serves as an energy storage device for the electric motor in the S 500 Plug-in HYBRID; it is also linked via a DC-DC converter to the 12-volt on-board network, which provides power to standard consumers such as the headlamps and various comfort devices. To ensure a consistently high level of electrical efficiency, the voltage transformers are water-cooled via an additional low-temperature circuit.
Special power electronics are required for operating the three-phase AC electric motor in the high-voltage direct current grid, and the inverter for this task is housed in the engine compartment. Because the power electronics system itself is heated by the electric current thus created, it too is integrated into the low-temperature cooling circuit. Mercedes-Benz employs standardised components for the power electronics system as well, enabling them to be efficiently combined with different electric motors and battery types across all model series. 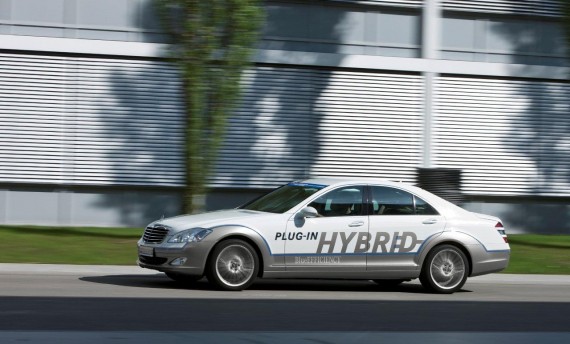 What if this had been the C209 CLK