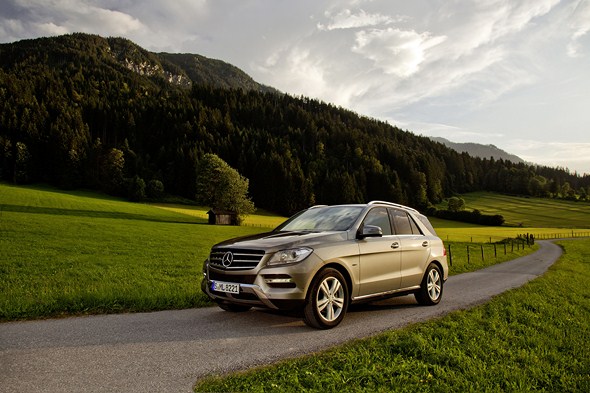 Stuttgart. The third generation of the M-Class was launched in September 2011 and, in common with its predecessors, it has had an enduring impact on the SUV sector. An additional V8 petrol version now joins the range in the shape of the ML 500 4MATIC BlueEFFICIENCY.

The equipment package is also further enhanced by new safety features such as COLLISION PREVENTION ASSIST (CPA)*. The new ML 500 4MATIC BlueEFFICIENCY can be ordered from 22 June and will be arriving at dealerships in autumn 2012. 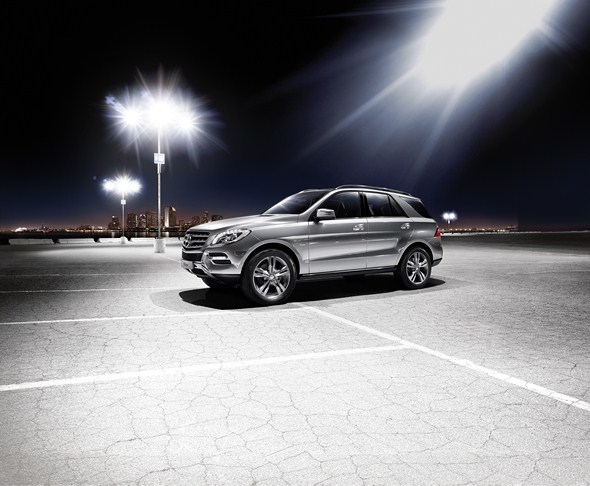 The high output despite reduced displacement is achieved mainly by the use of two exhaust gas turbochargers – one for each bank of cylinders. Other innovations of the new V8 engine include a further developed, third-generation direct fuel injection system with spray-guided combustion and piezo injectors combined with multi-spark ignition.

The outstanding fuel economy is underpinned not only by the V8 model’s state-of-the-art engine technology, but also by a comprehensive package of BlueEFFICIENCY measures. In addition to the ECO start/stop function which comes as standard, these measures include the seven-speed 7G-TRONIC PLUS automatic transmission.

Low-friction axle drives, electric steering, optimised belt drive and on-demand control of the ancillary components also play their part in reducing fuel consumption. Below is a summary of key data for all M-Class models:

The colour chart offers two gleaming new paint finishes: cavansite blue and cinnabar red. For those seeking an even more enjoyable driving experience in urban traffic, the M-Class is optionally available with Active Parking Assist. This electronic co-pilot automatically seeks out a suitable parking space and takes over steering duties during the parking process.

A further option to optimise operational comfort is the electric servo-locking mechanism, which automatically closes all doors and the boot lid.

The optional multicontour seats for driver and front passenger offer maximum comfort with new massage functions, fine-tuning via the COMAND system and luxury head restraints and seat cushion depth adjustment. When the interior becomes excessively warm – for example after a long period parked in hot sunshine – reverse flow seat cooling shortens the cooling period by first drawing air out of the seat before pumping it back in.

As of the new model year, the cockpit TFT display between the two instrument dials boasts an almost photorealistic image; in keeping with the COMAND screen it adopts the modernised display concept of a silver-grey colour scheme. With the internet-capable COMAND Online infotainment system on board, the delivery package additionally features the Mercedes-Benz automatic emergency call system.

In the event of a serious accident, the system notifies emergency services automatically and within minutes transmits detailed information about the exact location of the accident and the vehicle model involved. 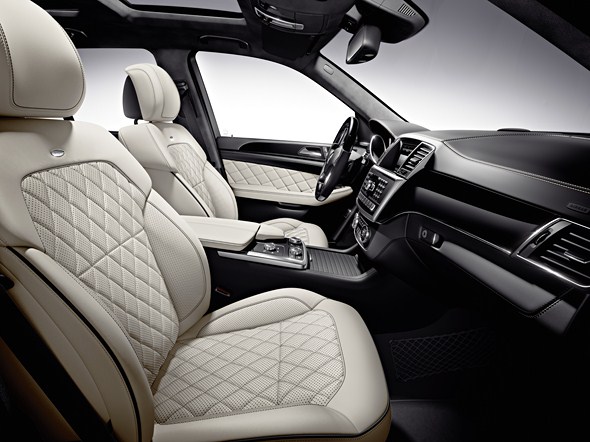 Various equipment packages are available for those seeking an even more exclusive look for their M-Class. For an enhanced dynamic appearance, for example, there is the AMG Exterior Sports package, featuring special body-coloured front apron, rear apron and side skirts, in addition to 48.3 cm (19″) 5-spoke high-sheen AMG alloy wheels.

The ON&OFFROAD package for the M-Class has six driving modes for optimising driving dynamics and handling safety, as the optimum drive system control is provided for an extremely wide range of on-road and off-road operating conditions.

The driver can select from one automatic mode, two special off-road modes and three on-road modes using a rotary control in the centre console. In terms of “hardware”, the ON&OFFROAD package comprises an underguard, a two-stage transfer case with reduction gear, an inter-axle differential lock and enhanced AIRMATIC functionality that allows a maximum ground clearance of 285 millimetres as well as a fording depth of 600 millimetres.

With the lighting package featuring the Intelligent Light System onboard, the M-Class driver will also benefit from a lighting system specifically optimised for off-road use. 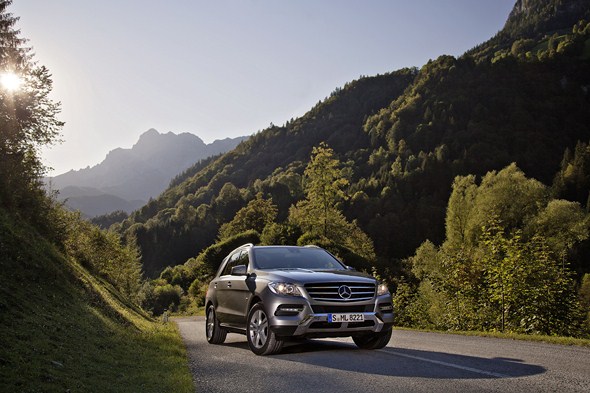 Active roll stabilisation in the form of the ACTIVE CURVE SYSTEM can be optionally combined with both the AIRMATIC air suspension with Adaptive Damping System (ADS) (standard in the ML 500 4MATIC BlueEFFICIENCY) and the ON&OFFROAD package.

This system uses active anti-roll bars on the front and rear axles and compensates for the roll angle of the body through bends, increasing agility and driving pleasure in the process. The system has the additional effect of increasing handing stability and therefore safety, particularly at higher speeds.

Further benefits of the ACTIVE CURVE SYSTEM include even greater ride comfort both when cornering and driving in a straight line, together with enhanced off-road abilities.

With sales of over 1.2 million vehicles, the M-Class is the most successful Mercedes-Benz SUV. At its world premiere in 1997, the M-Class was considered the precursor of all modern premium SUVs. The third generation was presented in 2011; like its predecessors, it achieved outstanding results in a wide range of polls and rankings. In its debut year the M-Class was awarded the golden steering wheel.

Latest successes from 2012: With NEDC fuel consumption figures of just 6.0 l/100 km, the efficiency champion ML 250 BlueTEC 4MATIC was voted most eco-friendly car in its class by the “ÖkoTrend” institute. Moreover, the trade journal AUTO TEST named the premium SUV its “Winner in Green”. In March, the readers of Europe’s leading 4×4 magazine Auto Bild Allrad voted the Mercedes-Benz M-Class “Car of the Year 2012”.

Prices of the latest model range at a glance*:

* Prices for the German market

The A-Class The pulse of a new generation