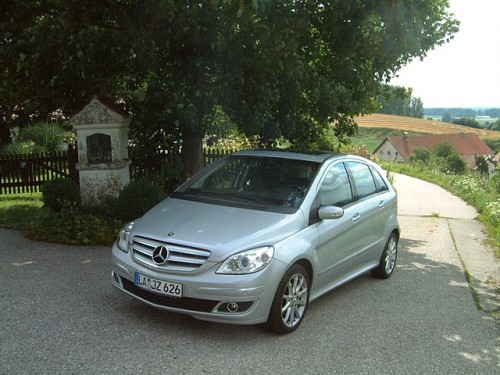 This morning I got to testdrive the B200 Turbo, the top-of-the-line B-Class. 193-horsepower @ 5,000 RPM and 280 Nm (206 lb/ft) of torque to the front wheels from a 2034cc 4-cylinder gasoline engine with a turbocharger. Great car I have to admit. I came away very impressed with the performance of the B200 Turbo.

After the disappointing B170 and B200 testdrove, my mind changed a little about the B-Class once I drove the B200 CDI with the sports package. Now, after the B200 Turbo drive, I have to say this: anyone reading this and seeking a B-Class, GET THE SPORTS PACKAGE. It helps a lot. This B200 Turbo came with the sports package; I think it might even be standard on the turbo models. Beautifully sculpted 17″ 10-spoke rims came with the sports package. Exterior color was Horizontblau and the interior had a dark sports look to it. Interior space was generous. This car had the Panoramadach roof window option, but my head still had enough space and I never bumped against the low ceiling.

Early impressions were positive. The 4-cylinder turbo rumbled to life with a nice sporty roar, then quickly settled into a smooth idle, which couldnt be detected. A 6-speed manual is standard on the B200 Turbo, but this model had the optional Autotronic (CVT) automatic transmission. I wasnt very impressed with this transmission the first time I drove it in the A180 CDI last winter. But here, the transmission worked absolutely fabulous. You couldnt feel any power sapping on the Autotronics part, unlike in the A180 CDI were it was noticeable that the CVT sucked precious power away from the car. I played around manually with the transmission and the board computer displayed 7 gears. Dont ask me how this is possible but maybe the Autotronic had 7 CVT gears (???). Not an expert on the subject.

Anyway, the engine was beautiful. It really pulled hard and strongly, even with a CVT transmission. In fact, the push was so strong, I was shoved back deep into the 50-50 leather-cloth seats. Not bad for a turbo 4-cylinder. Acceleration was fast, fairly brutal and seemed effortless. The little engine apparently supplied enough torque at all times it seems. Mercedes claims a 7.6 second 0-100 km/h time. It certainly felt that way, maybe a little quicker even. Top speed is 225 km/h (141 mph), but I only managed to bring it up to 160 km/h (100 mph) on a fairly long straightaway. Damn this thing could haul a$, no lie!

Something interesting was a kickdown on the CVT transmission. I floored it a lot and I always noticed how the RPM needle would quickly sprint to 5,000 RPM, and stop there (despite the max RPM being 6,000). As the RPM needle was stuck at 5,000 RPM and didnt budge, the km/h speedometer was flying from speed to speed. In effect, the car was accelerating rapidly with the RPM being stable at 5,000 RPM and not moving. Can anyone tell me what was going on here? Im pretty sure the CVT transmission played a big part in this. Once I took my foot of the pedal, the RPMs started dropping. I also noticed that at low speed, if I would push the pedal a little, the RPM needle would stop at say 3,000 RPMs and not move higher, and the cars speed would still increase. Pretty cool stuffand baffling at the same time. Im almost 100% positive the Autotronic transmission was involved here. Well, in no way did the transmission sap power here, or at least it didnt feel as if power was being sapped. At any speed, the B200 Turbo took off with phenomenal eagerness and power. Needless to say I was very impressed. All the while, a nice sporty engine sound came from the engine. Lovely. 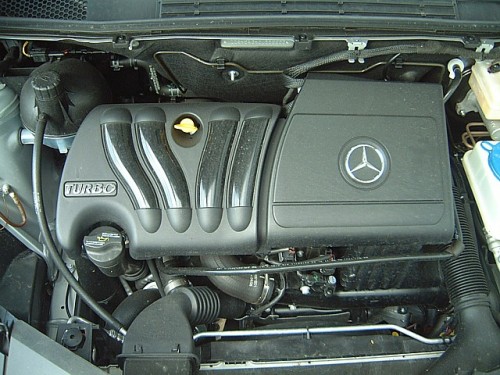 Oh yeah, before I forget, upon flooring the accelerator pedal with the car at a stand-still, the front wheels shook the car to the left or right, even if I had the steering wheel centered dead ahead: torque steer I guess. Thankfully, this only lasted maybe a second or two because at once, ASR and ESP kicked in to correct wheel-spin and in no time, the B-Class was set to accelerate. The same phenomenon occurred everytime I did a kickdown when the car was stopped, or moving along at an extremely low speed. Sometimes it was a little more brutal since the car would pull to the extreme right, then all of a sudden move left. Nevertheless, it was never an uncontrollable situation but it was shall we say, a little annoying. Guess you dont need an Acura TL to achieve torque steer eh? Funny thing was, in the B200 CDI, which has 300 Nm (221 lb/ft), I didnt feel this at all. But then again, the B200 CDI had a 6-speed manual so maybe this had an effect on it. If someone can clear me up here a little, Id be really grateful.

I suspect that the sports package improved handling thanks to a sporty set-up suspension and steering qualities. Steering feel was light, but not as light as in the B170. It was reasonably well weighted and you could push the B200 Turbo a little more than lesser B-Class. Body roll remained a problem however, except here, it wasnt as bad as in the B170 and B200 without the sports package. Drifting was easy to do with this car, but taking sharp curves while staying in your lane wasnt a strength of the B200 Turbo. The suspension, despite the sports package, was still a little too soft and the steering feel a little to vague. I wished for a more heavier and weighted steering feel like on the new A, C and SLK-Class, but overall, I quickly got the hang of it. The seats offered a lot of side grip and support, and were comfortable as well.

Overall, not bad. From a performance point of view, this engine is a gem. Responsive, fast and fluid are how I would describe it. Oh yeah, the brakes were pretty good to on this car just like the B200 CDI. Im still more of an A-Class fan than a B-Class fan, but the B200 Turbo was a pretty fun car to drive around with. Straight-line performance was impressive. Remember, I got it up to 100 mph, and this was a 2.0-l 4-cylinder turbo engine with 193-hp and FWD. Handling could have been better. This is where I am disappointed with the B-Class. The new A-Class, C-Class and SLK-Class have such precise weighted and responsive steering, but the B-Class has a very light and slightly vague touch to it for the most part. Why? I dont get it, I really dont. I must admit though that the sports package improves steering feel and handling big time over the regular B-Classes. Next week, the dealership is expecting an A-Class A200 Turbo. And I have come to love the current W169 A-Class. Id still take an A-Class over a B-Class. The little A just feels more sporty and tossable. Once again, the B200 Turbo was fast and fun, but its not as good as a handler as the A-Class IMHO.