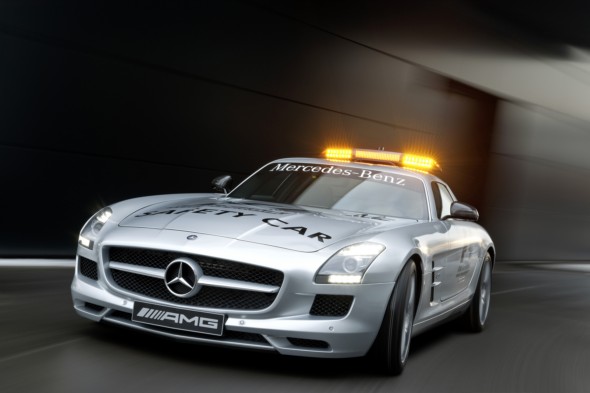 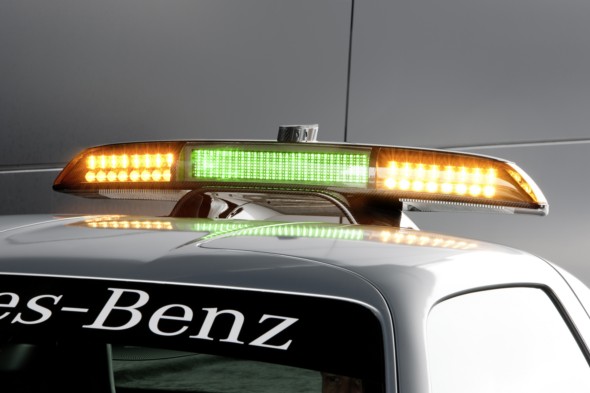 When the new Formula-1 season gets underway in Manama/Bahrain (12-14 March 2010), it will mark the debut of the most spectacular and powerful Official F1™ Safety Car of all time. The job of the new Mercedes-Benz SLS AMG, which will be launched on 27 March 2010, is to ensure maximum safety in Formula 1. The “gullwing” model replaces the SL 63 AMG, which was used as the Official F1™ Safety Car in 2008 and 2009. As in the last two years, the C 63 AMG Estate will be used as the Official F1™ Medical Car for the coming season.

“Together with the entire AMG Team, I am very proud that the new SLS AMG is the official F1 safety car. I’m sure all Mercedes and AMG fans will be excited to see the gullwing model together with the new Mercedes GP Petronas Team at the F1 circuits,” says Volker Mornhinweg, Chief Executive Officer of Mercedes-AMG GmbH. 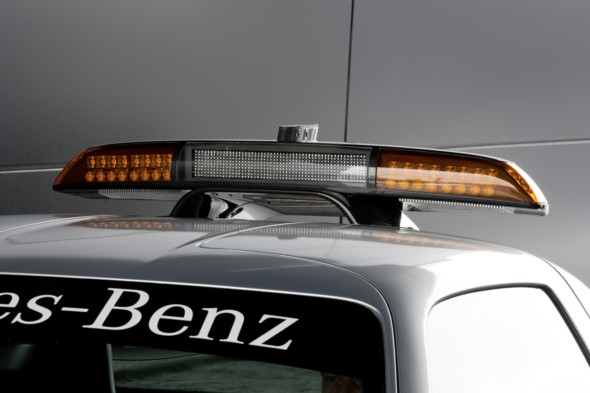 From March 2010, the Official F1™ Safety Car will be deployed whenever hazardous situations such as accidents or bad weather endanger normal racing. The SLS AMG, piloted by Bernd Mayländer (38, from Germany), will be on standby in the pit lane throughout the entire race. When radioed by Race Control, the former DTM driver and his co-driver, FIA man Pete Tib-betts (44, from the UK) will take to the track at the head of the field in order to guide the Formula-1 race cars safely around the circuit.

The Mercedes-Benz SLS AMG has the best possible credentials for this demanding role in the top flight of motor racing: its 6.3-litre V8 engine has a peak output of 420 kW (571 hp) and a maximum torque of 650 Nm, enabling the gullwing model to sprint from 0 to 100 km/h in 3.8 seconds. Fast lap times are a must for the Official F1™ Safety Car, otherwise the Formula-1 cars’ tyres and brakes would cool down too quickly, while their engines could overheat. 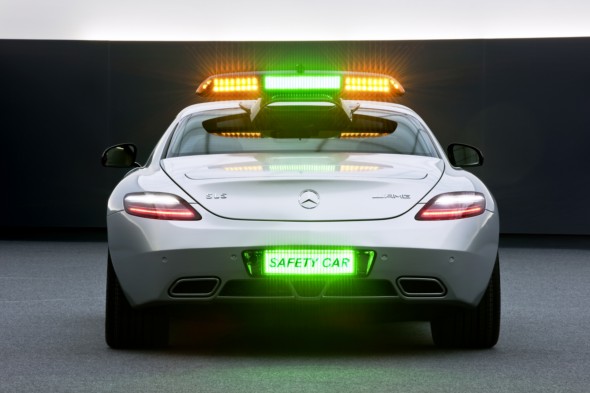 The unique vehicle concept is a key factor in ensuring outstanding driving dynamics: the aluminium spaceframe body keeps the vehicle weight down to 1620 kilograms (DIN kerb weight). And thanks to the dry-sump lubrication system, the AMG V8 powerplant can be installed very low down, resulting in a beneficial lowering of the vehicle’s centre of gravity.

The installation posi-tion a long way behind the front axle and the transaxle arrangement of the new seven-speed double-clutch transmission on the rear axle have a posi-tive effect on the weight distribution, which is 47/53 percent (front/rear). Pure motorsport tech-nology is used for the AMG sports suspension: aluminium double-wishbone axles front and rear ensure outstanding driving dynamics with precise turn-in ability, first-class agility, low mass inertia when changing direction spontaneously and, therefore, a high cornering limit. 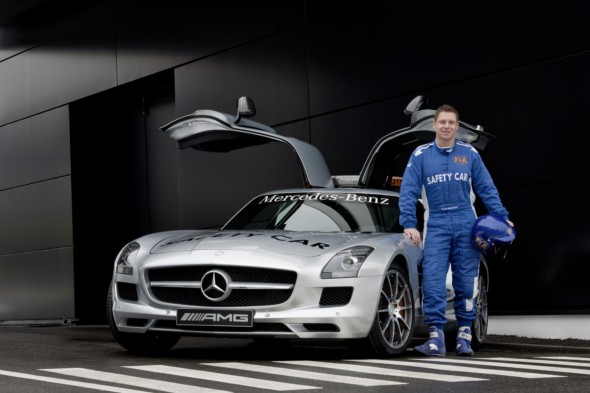 Mean-while, braking distances are minimised and resistance to fading is maxim-ised, even when the brakes are subject to typical race-track loads, courtesy of the AMG ceramic high-performance composite brake system with its generously sized ceramic discs measuring 402 x 39 mm on the front axle and 360 x 32 mm on the rear axle. The weight-optimised 10-spoke forged wheels are shod with 265/35 R 19 (front) and 295/30 R 20 (rear) tyres. 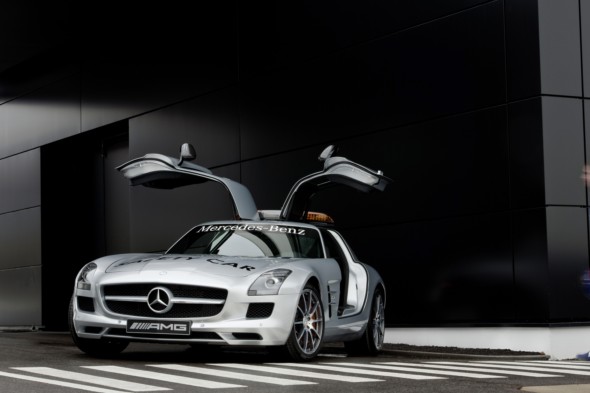 Compared to the standard-production SLS, the Official F1™ Safety Car is distinguishable on the outside by its prominent F1 logos, carbon-fibre exterior mirrors and the characteristic roof light bar with integrated TV camera. It sits on an all-new carbon-fibre hood whose shape has been tested in the wind tunnel to ensure optimum airflow at the rear aerofoil. 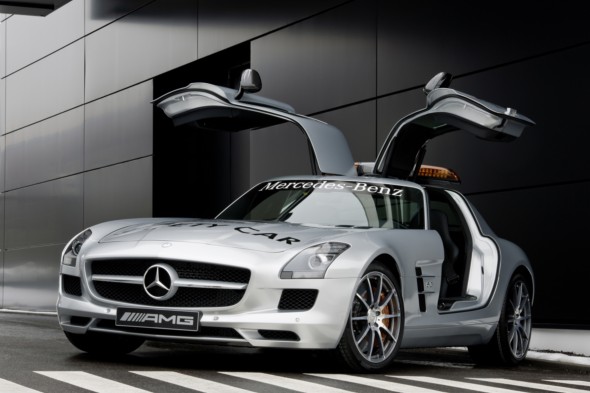 The aerofoil pops up when the car reaches 120 km/h and, together with the rear diffuser, provides the necessary rear downforce. LEDs are used for all light functions for the first time in the new, aerodynamically styled roof light bar. Their advantages over the previously used bulbs lie in their extremely fast response time and low power consumption.

The two centrally positioned green lights in the aerodynamically optimised light bar are illuminated when the Official F1™ Safety Car joins the field and first needs to overtake all the racing cars in front of it. Once the SLS AMG has assumed the leading position, the outer orange flashing lights are switched on to signal to the Formula-1 drivers that no overtaking whatsoever is allowed. The white stroboscopic lights in the headlamps and tail lights perform a general signalling function in that they always flash whilst the safety car is deployed. 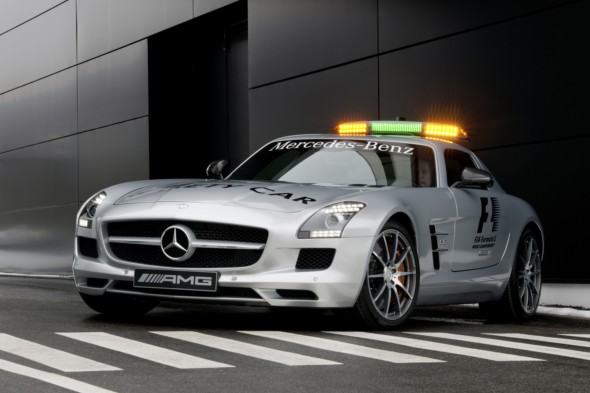 A special number plate at the rear, with “Safety Car” lettering and 700 LEDs, provides additional safety in darkness or wet weather. A reversing camera is integrated to the left of the number plate, allowing those in the cockpit of the Official F1™ Safety Car to keep an eye on the Formula-1 cars behind via monitor.
Practical interior with AMG sports bucket seats

The distinctive gullwing doors open to reveal a practical cockpit which, like the exterior, differs only slightly from that of the standard-production model. AMG sports bucket seats with black leather upholstery and six-point seat belts ensure optimum lateral support.

On the right side of the AMG DRIVE UNIT, there are four coloured buttons for controlling the various light func-tions, along with the signal horn, which is activated when the car is driving into and out of the pit lane. The centre console, like various other interior trim parts, is finished in genuine carbon fibre, while the AMG performance steering wheel in leather/Alcantara features a specially shaped grip area, a high-quality genuine-metal insert and a flat-bottomed rim with a diameter of 370 millimetres. Two genuine-metal shift paddles are used to change be-tween the seven gears in the double-clutch transmission. 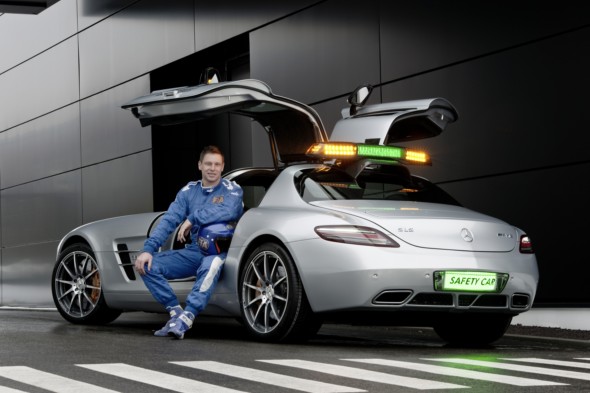 Two central monitors in the SLS AMG cockpit are used to monitor the pro-gress of the race. To the left and right of the lower monitor are the controls for the radio system, which allows Bernd Mayländer and Pete Tibbetts to communicate with Race Control as well as with each other.

A second interior mirror lets the co-driver keep an eye on the Formula-1 cars behind. Mean-while, the “Marshalling System” is integrated in the central display on the in-strument cluster and in the lid of the glove compartment: here the driver and co-driver can see exactly the same signals as the Formula-1 drivers in their cockpits. For instance, the various LEDs indicate when yellow or green flags are being waved. LEDs indicating the status of the roof light bar, along with an on-board camera angled towards Bernd Mayländer, are mounted at the front end of the dashboard.

The SLS AMG is not the only AMG high-performance car to be involved in the Formula-1 World Championship: as in 2008 and 2009, the C 63 AMG Estate is the Official F1™ Medical Car – responsible for ensuring rapid emergency response in the event of an accident. The lightning-fast estate car follows the Formula-1 field on the start lap because the race cars are still bunched extremely closely together during this critical phase of the race. 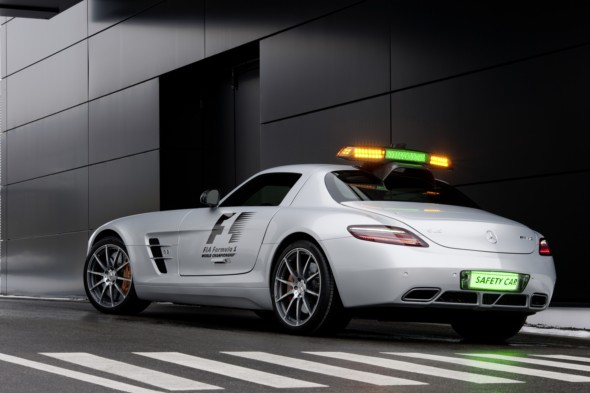 The concept on which the AMG Estate is based is ideal for meeting the re-quirements of Formula-1: outstanding driving dynamics are assured courte-sy of the AMG 6.3-litre V8 engine developing 336 kW (457 hp) with a peak torque of 600 Nm, not to mention the AMG SPEEDSHIFT PLUS 7G-TRONIC transmission, the adjustable coil-over suspension, the AMG light-alloy wheels shod with 235/35 R 19 (front) and 255/30 R 19 (rear) tyres, the differential lock, the 3-stage ESP®, and the AMG high-performance brake system with internally ventilated and perforated composite brake discs on the front axle.

The new AMG front apron with larger air dams is an indicator of the opti-mised cooling for the water, engine oil, transmission fluid and power steering. One aspect that cannot be seen but can certainly be heard is the distinctive AMG V8 sound emitted from the new rear silencers of the AMG sports exhaust system. 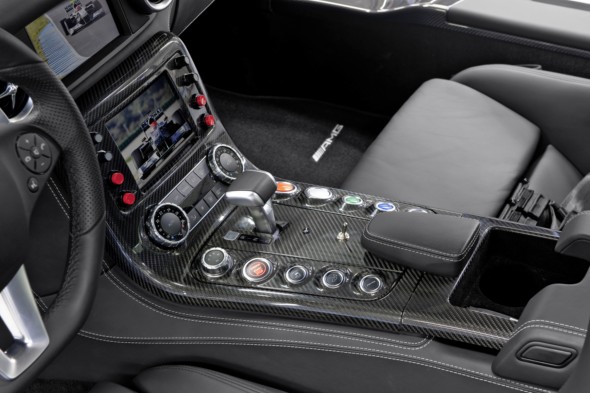 Like the Official F1™ Safety Car, the Official F1™ Medical Car is distin-guishable by its F1 logos, the roof light bar, and the stroboscopic flashing LED lights at the front and rear. A number plate illuminated with LEDs and displaying the words “Medical Car” on the tailgate makes the car easier to see in darkness or adverse weather conditions.

Plenty of space in the boot for emergency equipment

There is plenty of space for all of the emergency equipment – including a defibrillator and respiration apparatus – in the 485-litre boot of the C 63 AMG Estate. Four AMG sports bucket seats with six-point seat belts, two monitors integrated in the centre console for monitoring the race and a radio set for communicating with Race Control distinguish the interior of the Official F1™ Medical Car from that of the standard-production C 63 AMG Estate. 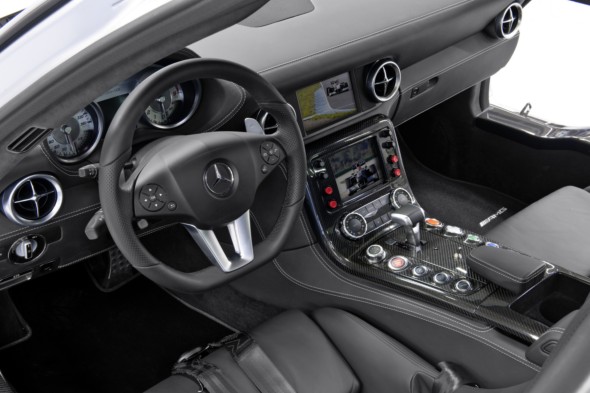 This involves drawing on over 40 years of know-how from the field of motorsport as well as the wealth of experience in the design of high-performance sports cars. Numerous test drives were carried out on various racetracks in order to tune the suspension and verify all the systems and components. Two highly-qualified AMG technicians are also on hand to take responsibility for the deployment of the Safety Car and Medical Car at all 19 Formula-1 races. 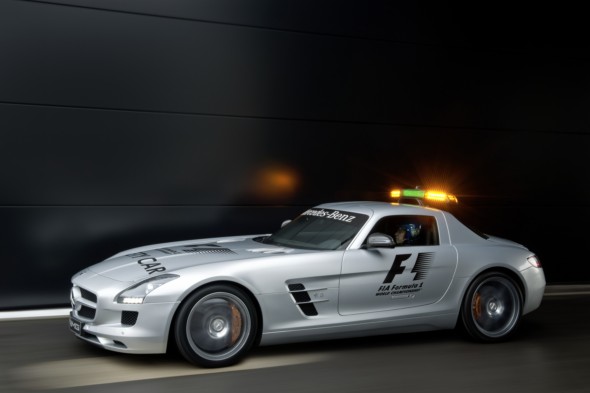 All AMG Safety Cars at a glance

All AMG Medical Cars at a glance 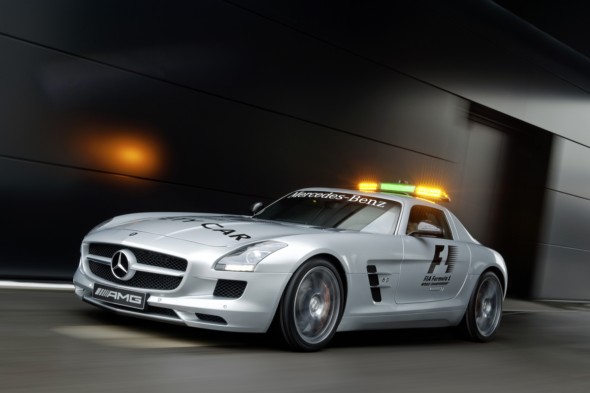 As early as 1984, an AMG E-Class Coupé with V8 engine was used occasionally as the Medical Car. The activities of the Affalterbach-based company are also evidence of Mercedes-Benz’s long-standing commitment to Formula 1.

"We have entered the Mercedes era"