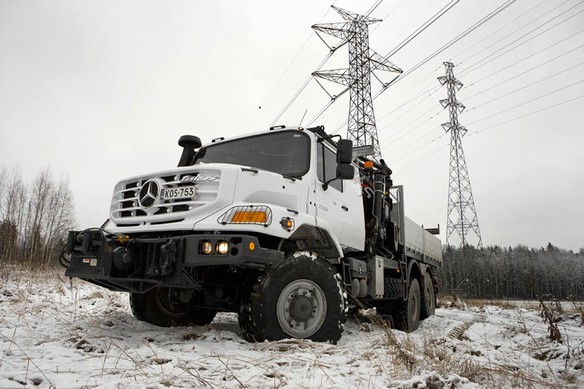 Helsinki / Stuttgart –  Mercedes-Benz has achieved a first in the far North of Europe by supplying the world’s first new cab-behind-engine truck designed for civil use – known as the Zetros – to energy supplier Eltel in Finland. Based in Espoo near Helsinki, Eltel Networks Oy took delivery of its Zetros 2733 with a 6×6 axle configuration (six wheels, with all six being driven). The company is Northern Europe’s largest service provider of networks for energy supply and telecommunications companies. The Zetros will be deployed for the construction and maintenance of overhead power lines.

The all-wheel drive three-axle vehicle is faced with the most demanding of requirements due to the adverse conditions: extreme minus temperatures, ice and snowstorms, as well as difficult terrain with a lot of sludge and  significant gradients – above all the Zetros has to overcome all of this in the shortest possible time, for example to reach and then repair an overhead power line which may have split under the sheer weight of the snow.

Thankfully the design of the Mercedes-Benz Zetros is ideally suited to meeting such requirements:

Positioning the cab behind the front axle has resulted in a number of significant advantages for the driver of this cab-behind-engine truck due to its design: the favourable and even weight distribution provides smooth handling over difficult terrain, and driver comfort is also significantly enhanced.

“Overhead power lines are built away from surfaced roads, and our staff need the best equipment for this. At the same time we also have to move through the outdoor locations in which we work in an environmentally responsible manner. The large rubber tyres of the Zetros mean that it has much less of an impact on the forest floor than tracked vehicles”, explained an enthusiastic Juha Luusua, CEO of Eltel Networks, at the vehicle handover ceremony.

According to Yaris Pürsün, Head of Mercedes-Benz Special Trucks : “The Finns are well known for choosing the best technical and economical solutions. The new Zetros is precisely the right vehicle to meet the demanding requirements and ensure that construction and maintenance work on the power lines can continue under the extreme conditions in Lapland.”

Thanks to its cab being located behind the engine, the Zetros benefits from a low centre of gravity and a balanced weight distribution over the axles. As a result it is possible to mount large implements on the front of the vehicle, such as a snowplough for example. This is where the Zetros 6×6 has a clear advantage as a cab-behind-engine vehicle compared with a cab-over-engine truck, which for such uses would have to be configured as an 8×8 vehicle.

In addition, driving in difficult terrain is easier and more comfortable thanks to its low centre of gravity. The engine can also be accessed without tilting the cab, and due to its low design long items of equipment can extend over the cab.

The Zetros is equipped with a powerful 240 kW (326 hp) inline six-cylinder diesel engine which produces 1300 Nm of torque, ample for every situation. Built at the Mercedes-Benz plant in Wörth, the vehicle was fitted with a Hiab telescopic crane for Eltel which extends to a height of around thirty metres above ground. An aluminium platform behind the crane can accommodate building materials, and can also be fitted with crane grippers as well as a passenger carrying cage.

The first assignment for the new offroad member of Eltel’s fleet of vehicles is the construction of a 220 kV high-voltage power line in Lapland. Some 310 pylons designed to carry six cables are to be erected on the 90-kilometre stretch between Sodankylä and Levi, an area which is famous for the world cup ski races. Construction work is scheduled to begin in December 2009, and the project is expected to be completed by December 2010.