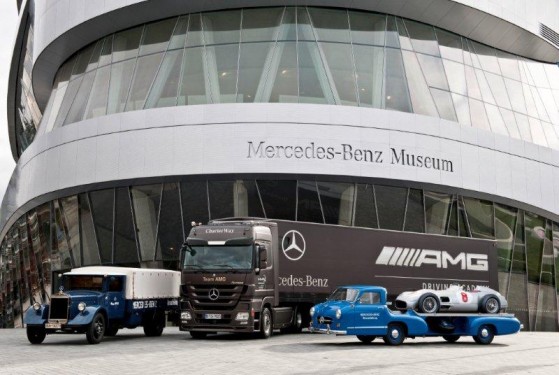 The Mercedes-Benz Silver Arrows are celebrating their 75th anniversary this year, having first blazed to victory on the world’s racetracks back in 1934. Their drivers have become legends, with names like Rudolf Caracciola and Manfred von Brauchitsch still ringing in the ears of motor sports enthusiasts. However, neither the Silver Arrows of yesteryear nor those of today rolled to the racetrack under their own power. The sensitive high-performance vehicles, whether for Formula 1 or touring races, need a perfect infrastructure. Races could not be run without racing car carriers, and consequently there could be no racing victories. Some of the Mercedes racing car carriers are no less spectacular than the racing vehicles they transport. Next year the racing car carriers will once again be used in the Formula 1 races by a works team sporting the Mercedes star – the Mercedes Grand Prix. 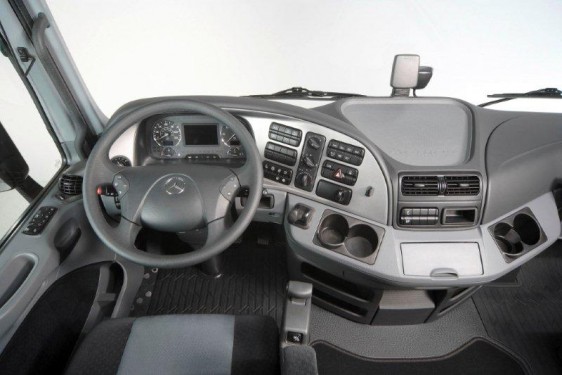 Comfortable driver lounge in the racing car carriers for the 2009 season
A whole new world opens up to people visiting a racing car carrier when they pass through a glass door in the neck of the semi-trailer. The area serves as a recreation room and a refuge for the drivers of the racing cars. The tidy locker has room for the helmet at the top, while the shoes can be stored at the bottom, and the driver’s outfit in between. A cosy round suite is great for relaxing, and cooled drinks are kept in the refrigerator.
Today’s racing car carriers are not only a means of transport but also serve as sophisticated lounges. In the past, drivers of the Silver Arrows of the 1930s and 1950s did not have it quite so nice. For them, the 2009 racing car carrier would look like something from another planet. 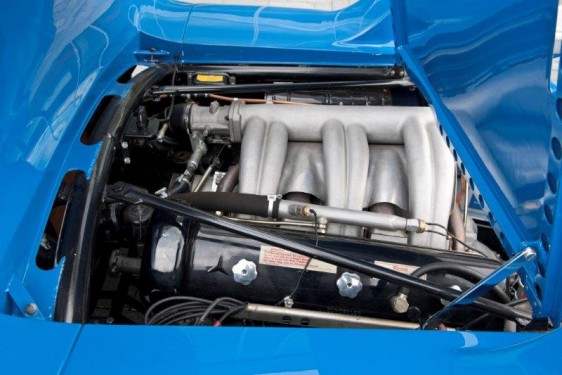 The rich sound of 18 cylinders
Even though the “orchestra” consists of only three “musicians”, the sound gets deep under one’s skin. It’s generated by a total of 18 cylinders that are distributed among three trucks. The “top note” is the bright and nervous tone of a three-litre engine from the legendary Mercedes-Benz 300 SL sports car of 1955. It is supplemented by the grunting sound of a gnarly four-cylinder petrol engine from the 1930s. In the background can be heard the powerful rumble of the V8 turbodiesel of the 2009 Mercedes-Benz Actros heavy-duty truck. The engine’s bass sound is generated by 15.9 litres of displacement. Although the three trucks look very different and were produced at vastly different times, they all share the task of carrying Mercedes-Benz Silver Arrow racing cars.
The three generations meeting for the family reunion confirm the observation that children grow bigger than their ancestors. Together with its semi-trailer, the current Actros model is four metres tall and 16.5 metres long. Compared to this giant, the predecessor vehicles appear almost petite and look like little more than toy trucks.
Among them is the Mercedes-Benz Lo 2750 from the 1930s. The vehicle has arched wings, an angular cab, and a flashing chrome radiator grille with a big star proudly placed on top. The vehicle’s number “2750” refers to its payload capacity. Back when it was built, the vehicle was designated a 2.75-ton vehicle, in keeping with its payload. Today, the Lo 2750 would be declared a 6.5-ton truck in accordance with its gross vehicle weight.
The third truck at the reunion lacks an official designation but it doesn’t need one, as it is known by its nickname of “The Blue Wonder”. The reason why this famous racing car carrier of 1955 bears this designation is immediately evident, as the vehicle’s crouched blue body, forward-positioned cab and sleek lines show that it’s in fact a sports car that has been disguised as a racing car carrier. 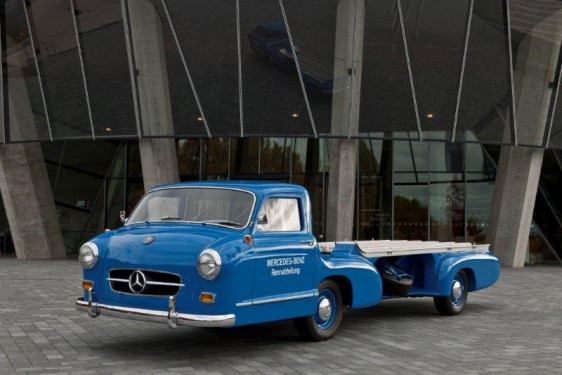 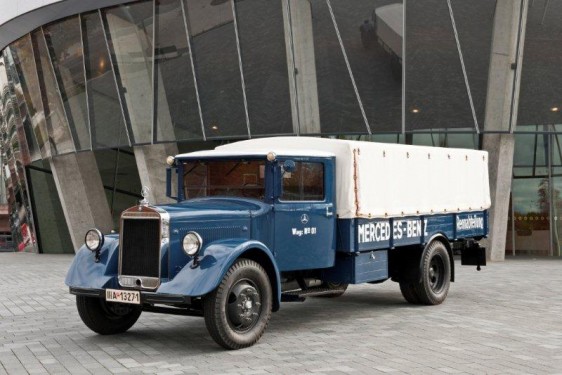 1934: The new Silver Arrows are now transported on trucks
As early as the 1920s, Mercedes-Benz discovered the advantages of a low frame, which makes it easy for passengers and cargo to get in and out. The company therefore used such frames later on as a platform for its racing car carriers. Trucks began transporting the racing cars in 1934, the year in which the Silver Arrows were introduced. Large white letters on the wooden sides of the Lo 2750, as the racing car carrier was simply known, spell out the words “Mercedes-Benz Rennabteilung” (“Mercedes-Benz Racing Department”).
The brochure published at the time optimistically states that the vehicle posseses a “wealth of appointments”. Among other things, this meant that the instrument panel had switches for the lamps and the electric turn signal, as well as a speedometer and kilometre counter, an oil indicator display, a fuel regulator, a glow plug and start switch, and a socket for a hand-held lamp. Comfort as we would define it today cannot be found in the Lo 2750.
Despite this drawback, this type of racing car carrier transported a number of winning vehicles. In June 1934 the new W 25 Silver Arrow with a supercharged engine won the International Eifel Race on the Nürburgring, marking the beginning of a series of victories that would continue until 1939. The racing car carriers were always on hand. After each victory they proudly paraded the Silver Arrows on their loading platforms through the streets.
The model shown here is based on a truck of 1936. In time-consuming restoration work, the former water-spraying truck of the Munich municipal sanitation department was converted into a racing car carrier that exactly matches the historical models. The star on the radiator grille now shines as proudly in the sun as though the truck had actually accompanied the historic victories of Rudolf Caracciola, Manfred von Brauchitsch, Hermann Lang and Luigi Fagioli. 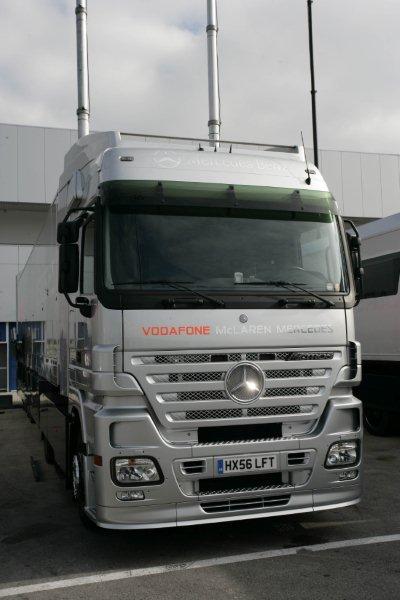 Current Actros trucks serve as racing car carriers for Formula 1 and DTM
The current racing car carriers of the Mercedes-Benz Actros series have also transported winning cars. For Formula 1 races, for example, they have carried the racing cars of Lewis Hamilton, who became the world champion for Vodafone McLaren-Mercedes in 2008. Despite his young age of 24, Hamilton is one of the most successful Formula 1 drivers of all time, having won eleven Grand Prix races to date. In the upcoming racing season, they will be performing their crucial services for the new works team, Mercedes Grand Prix. The Actros racing car carriers also transport the AMG Mercedes C-Class cars of German Touring Car Championship (DTM) drivers like Paul Di Resta, Ralf Schumacher, Bruno Spengler and Gary Paffett to racetracks throughout Europe.
Today, the driver of the racing car carrier climbs up five steps to reach the spacious Megaspace cab, where he sits high above the traffic in his own heavenly world. The driver area sports an impressive array of switches and displays. The Actros rolls along quietly and comfortably – a far cry from its predecessors. The onboard refrigerator is there for the driver’s use, who also benefits from an air conditioner and a parking heater. What’s more, a high-quality bed with a point-elastic slatted frame provides the driver with the kind of sleeping comfort he is accustomed to at home. For his morning ablutions, he has a mirror and a towel rack. 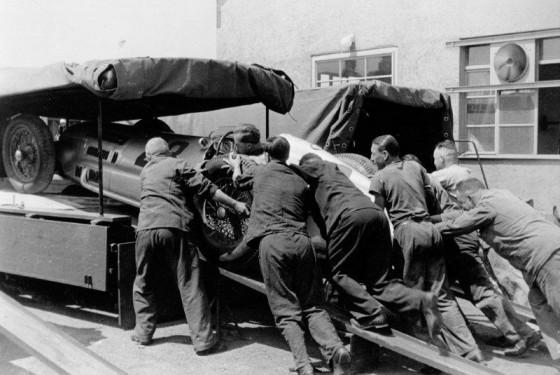 Today’s safety systems’ performance would have been considered science fiction in the past
Like today’s racing cars, the Actros is extremely safe. In addition to the vast array of safety equipment found in the Actros as standard, the Mercedes-Benz racing car carriers also feature an extensive safety package that includes stability control, roll control and a lane assistant, as well as a proximity control system that comes with Active Brake Assist.
This emergency braking assistant automatically initiates an emergency braking manoeuvre if a rear-end collision is imminent. No racing car currently has such safety technology. When viewed from the perspective of 1934 or 1955, the electronic assistants are pure science fiction: What today is taken for granted was not even conceivable back then.
The upper level of the Actros trailer has room for two racing cars in a row, which are lifted into and out of the truck on a lifting platform. The lower level has lots of room for toolboxes, some of which are in roll containers so that they can be taken out at the racetracks for work at the pit stops. The side wall can be folded down, and additional material is stowed in externally reachable storage compartments. The racing car carriers of 2009 are wonders as well, except they no longer happen to be blue. 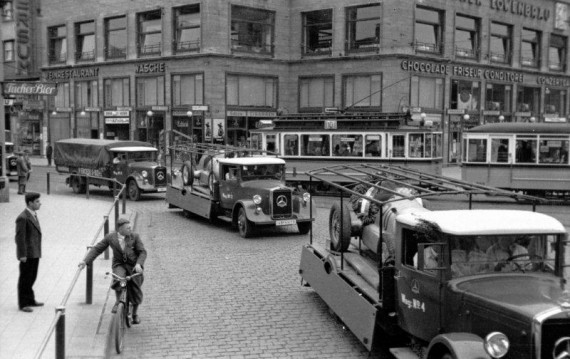 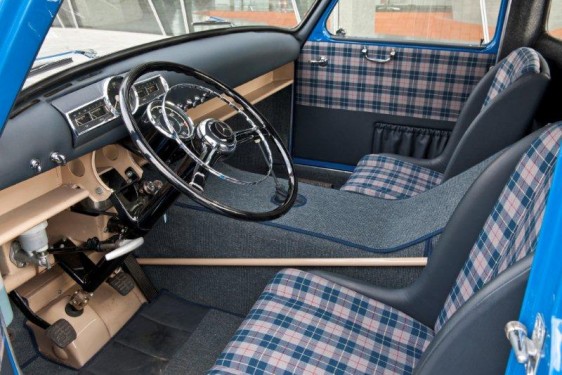 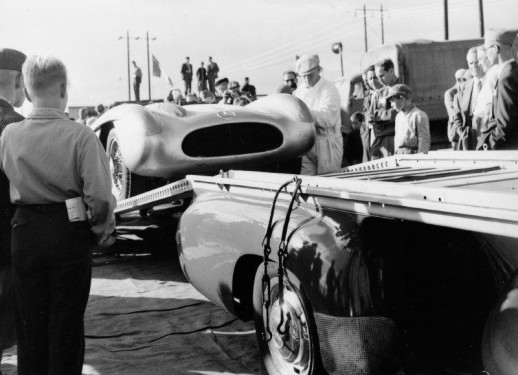 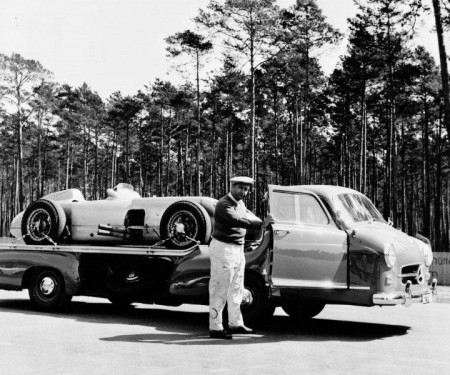 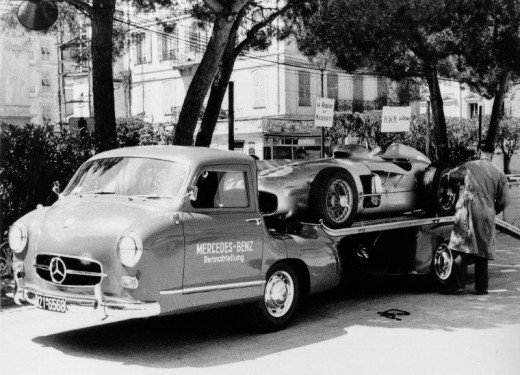 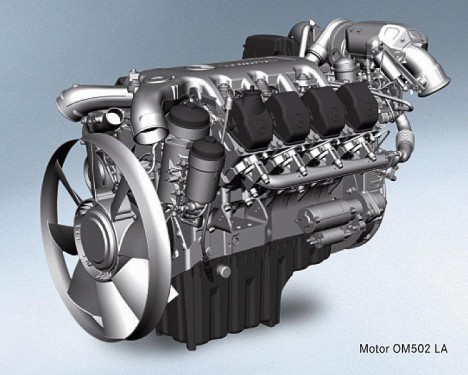