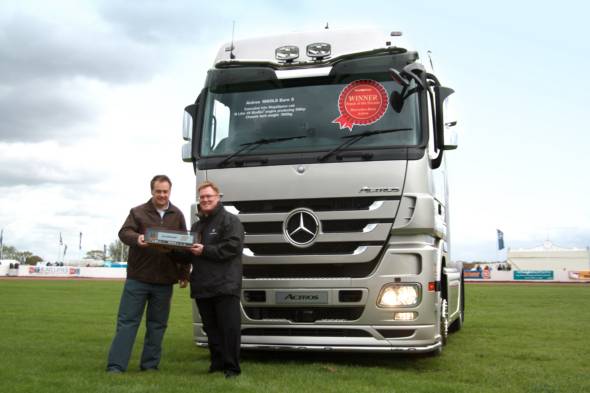 Stuttgart/London – The readers of the British “Truck & Driver” magazine have cast their vote for the 2009 Mercedes-Benz Actros as “Truck of the Decade”. Candidates for the election as Truck of the Decade were ten vehicles, all of which were crowned International Truck of the Year in the years 2001-2010.

A panel of experts had elected the current Mercedes-Benz Actros model “Truck of the Year 2009”. The specialist journalists from 21 European countries paid tribute to the enhanced economy, environmental compatibility, safety and comfort afforded by the innovative technology. With the Mercedes PowerShift 2 automated transmissions installed as standard in the road vehicles, truck drivers will find their daily lives made even easier. The Mercedes-Benz Actros for road transport has been available since March 2008 in its third-generation version.

Since entering the market in 1996, around 650,000 vehicles have been sold. All three generations of the Mercedes-Benz Actros have been market trendsetters and each new generation has been elected “Truck of the Year” on making its debut. It remains the only truck with Active Brake Assist – also known as Emergency Braking Assist. Through the “Safety Technology” initiative, the Mercedes-Benz Actros has made a name for itself as a safety truck far beyond its field.

Sam Whittaker, Sales and Marketing Director Mercedes-Benz Trucks in Great Britain, said: “This is a fantastic award for the Mercedes-Benz Actros to win and it makes me very proud. I’d like to thank all the Truck & Driver magazine readers who took time to fill in the questionnaire and post it back, especially those who voted for our Flagship tractor.”

In the current Actros model, the improved Mercedes-Benz PowerShift 2 transmission is installed as standard, offering an integrated inclination sensor as well as an optimised shift strategy.

The Actros was the first and remains the only series-production truck which can be equipped with Active Brake Assist as an option. It is based on the Telligent proximity control and independently triggers emergency braking in the event of acute danger of a rear-end collision with a vehicle ahead.

Further optional safety systems are available to support the driver: by means of an acoustic signal the Telligent Lane Assistant warns if the vehicle is in danger of leaving its lane. The Telligent stability control is an active driving safety system which reduces the risk of a semitrailer skidding. The Telligent roll control provides vehicle damping appropriate to the circumstances. Safety assistance systems are also supported by insurers in the form of discounts on premiums.

Entrants for Truck & Driver’s “Truck of the Decade”:

Now this is brave, or perhaps NOT!