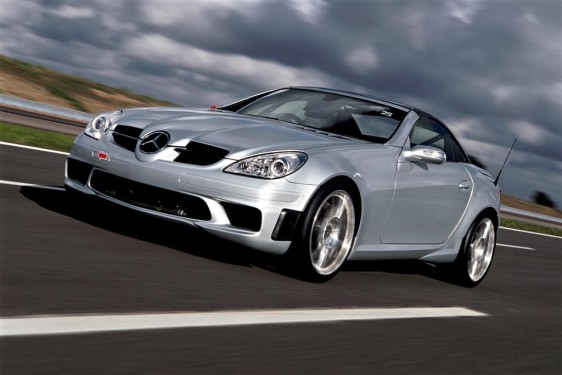 Affalterbach, Mercedes-AMG has developed an uncompromisingly sporty SLK 55 AMG for an Asian investor. The two-seater includes suspension, brakes and a cooling system that have been specifically tuned for the planned AMG Ultimate Experience Asia lifestyle event; plus numerous lightweight construction features which provide exhilarating handling dynamics. The design of the 265-kW/360-hp eight-cylinder roadster is based on the SLK 55 AMG safety car, which ensured maximum safety throughout the 2004 and 2005 Formula 1 seasons.
The AMG Ultimate Experience Asia is an exclusive series of lifestyle-oriented events, aimed specifically at sports car enthusiasts in the Far East. Everyone from individuals enamoured with motorsport to clients of large corporations will be able to compete at the wheel of the 35 uncompromising AMG sports cars at ten events that are being staged by an Asian investor in countries such as China, Indonesia and Thailand. The series of lifestyle events is due to get underway at the Formula 1 Grand Prix in Sepang/Malaysia (March 17 – 19, 2006). Mercedes-AMG plans to launch a limited-edition road-going model based on the SLK 55 AMG Ultimate Experience Asia in the near future. The custom-designed AMG vehicles are not registered for road use so far and will only be driven on private racing tracks. However, the sale of these vehicles has prompted AMG to meet the numerous demands for purist-oriented high-performance cars. 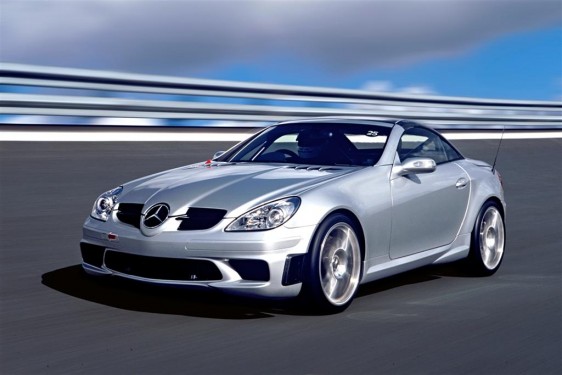 The most striking aspect of the SLK 55 AMG Ultimate Experience Asia is its hardtop made from carbon-fibre composite (CFRP), a high-tech material commonly used in Formula 1 and the German Touring Car Championship (DTM). The unpainted, silk matt black roof with its visible carbon-fibre structure is a highly attractive feature that appears to change colours, depending on which angle it is viewed from and how the light strikes it. This special SLK 55 AMG also provides visual clues to its motor racing genes with, for example, new 19-inch AMG forged light-alloy wheels featuring multi-spoke styling. 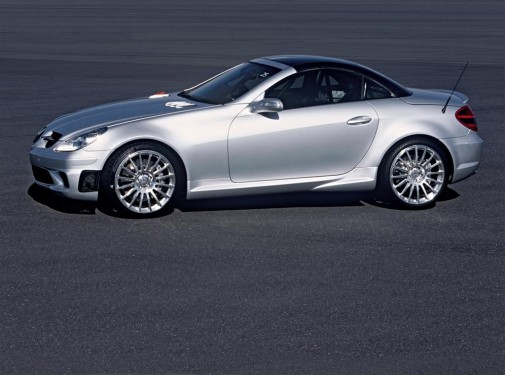 Around 25 kilograms have been saved simply by using the carbon-fibre roof with its plastic rear window and dispensing with the vario-roof mechanical and hy-draulic systems. These measures lower the vehicle’s centre of gravity, helping to improve handling dynamics thanks to reduced body pitch and roll combined with higher cornering speeds. Additional lightweight construction measures  including forged wheels, an optimised AMG sports exhaust system, leaving out insulat-ing materials, fitting lighter door linings as well as a fibreglass-reinforced plastic bucket seat compensate for the extra weight of the braking system, the larger 80-litre racing tank, the roll cage and the fire extinguishing system. The kerb weight of the SLK 55 AMG Ultimate Experience Asia is considerably less than 1500 kg.

Transfer from motor racing: suspension, wheels and brakes from the safety car

The suspension, wheels and braking system on the uncompromising SLK-Class are based on the safety car: for instance the set-up with firmer spring/damper tuning and harder torque strut bearings at the front axle is essentially the same as that used for the 2004/2005 official Formula 1 safety car. The wheel/tyre combination with 235/35 R 19 (front) and 265/30 R 19 (rear) tyres was likewise taken from this car. The ultra-light 19-inch AMG light-alloy wheels produced using sophisticated forging technology are new. Each wheel weighs around a third less than a conventional cast-aluminium wheel.

Another feature the Ultimate Experience shares with the safety car is the braking system: 360 x 22-millimetre composite brake discs with six-piston fixed callipers and special racing brake pads provide the deceleration at the front axle. Thanks to the innovative composite design with a grey cast iron brake disc connected to an aluminium bowl, peak temperatures can be avoided extremely effectively, giving the brakes outstanding fade resistance in harsh racing-circuit conditions. 330 x 26-millimetre steel brake discs with four-piston brake callipers are used at the rear axle. All the discs are internally ventilated and perforated; the front brakes, which have to deal with particularly high stresses, have specially designed cooling ducts yet more technology adopted from motor racing. 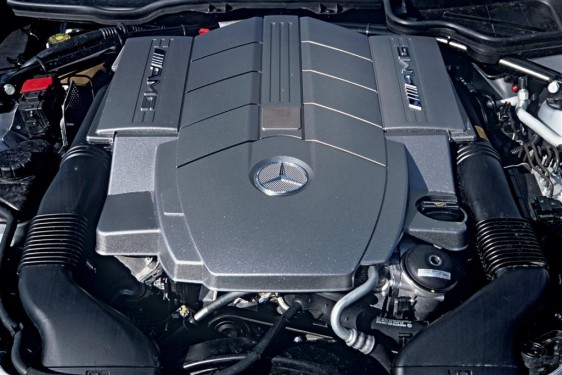 The AMG 5.5-litre V8 engine developing 265 kW/360 hp and 510 Nm has been lifted straight from the standard-production car. Modified especially for the racing circuit, the AMG sports exhaust system with two twin chromed tailpipes at the rear provides a more dramatic sound experience at the racetrack. An auxiliary engine oil cooler has been integrated in the new-look AMG front apron; another engine oil cooler (right) and a transmission oil cooler (left) have replaced the standard-fit fog lamps. Side openings allow the warm air to be dissipated effectively. A more powerful cooling system for the power-steering oil pump and an active cooling system for the rear axle differential have also been added. These measures ensure trouble-free operating temperatures whatever the weather conditions. The transmission control system has also been specially configured for the racetrack: for example, the gears can be shifted entirely using a manual mode. There are two manual modes available M1, and M2 which allows even faster gear changes. Steering-wheel gear-shift paddles, now the norm in motor racing, have also been fitted.

Optimised weight distribution for superlative handling on the racetrack 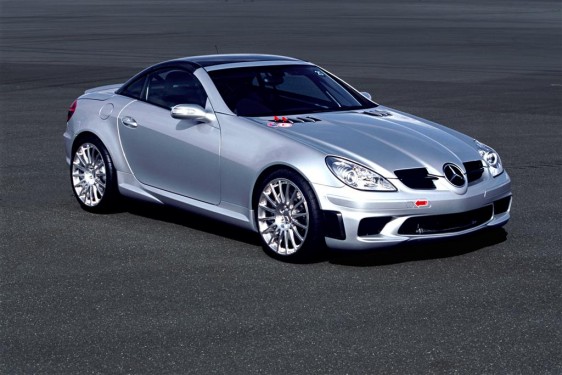 Optimised weight distribution is another decisive factor in producing handling on a par with a racing car: by moving the battery from the engine compartment to the boot and fitting an 80-litre racing tank in the boot, the weight has been distributed almost perfectly between the front and rear axle (52 to 48 percent). The racing tank with its typical foam inserts also prevents fuel from sloshing from one side to the other the ideal set-up for minimum body movements on fast S-shaped bends. The dominant note in the interior is the practical look and feel of a racing car: the fibreglass-reinforced plastic (FRP) bucket seat with a six-point belt and fireproof fabric cover provides optimum lateral support whilst the roll cage and the fire extinguishing system ensure optimum safety.