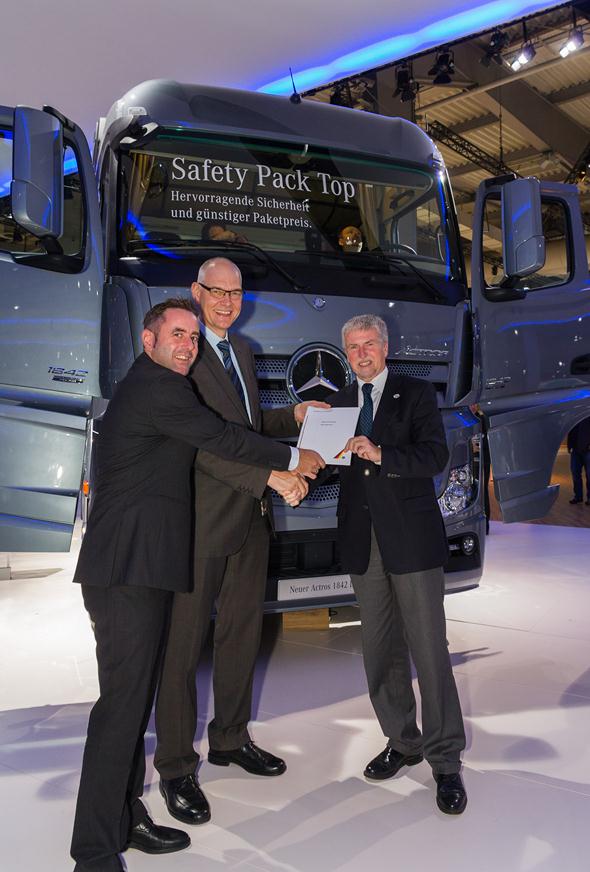 Hanover – At the IAA this year, Daimler AG was presented by the German Federal Motor Transport Authority (KBA) with the first certificate of approval to be issued in Europe in relation to the international Regulation on “AEBS – Advanced Emergency Braking Systems”.

The certification applies to Mercedes Benz trucks, and more specifically to the new Actros and to the Antos launched at the IAA in 2012. These Mercedes-Benz trucks are thus proven to already meet the legal requirements that will in fact not become mandatory until the second stage of the Regulation takes effect in 2018.

The certificate of approval was presented by the President of the KBA, Ekhard Zinke, to Jens Hamester (Head of Truck Product Engineering) and Dr Rainer Müller-Finkeldei (Head of Mechatronics Development).

Mercedes-Benz trucks fitted with the ABA 3 emergency braking system, as now certified, are the only trucks so far that already meet the requirements of AEBS Stage 2, which will not become mandatory in relation to new vehicle registrations until 11/2018. Early compliance with Stage 2 means that this significant safety benefit can now be offered well ahead of time. 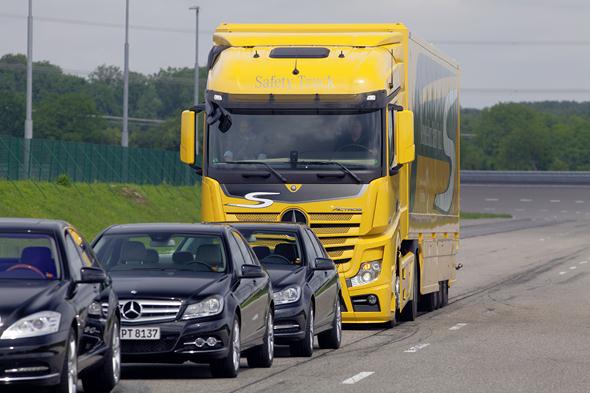 The Mercedes-Benz Actros – and with it its sibling in the short-radius distribution sector, the Mercedes-Benz Antos – has thus now been made even safer. While the Actros was already considered the world’s safest truck, the new Actros with the next generation of this unique system, Active Brake Assist 3, offers even more.

The system, also known as the emergency braking assistant, is now capable of taking independent action to initiate full emergency braking in response to a stationary obstacle. The Actros is thus able not only to mitigate the consequences of rear-end collisions, as hitherto, but also to prevent such accidents from happening in the first place – yet another milestone in truck safety development.

Driver assistance systems can play a significant role in the prevention of road traffic accidents. In 2009 the EU Commission, under its general safety Regulation 661/2009/EC, initiated a series of measures aimed at improving road traffic safety. This prescribes the phased mandatory introduction of three important driver assistance systems with relevance to road safety for all new vehicles throughout Europe: 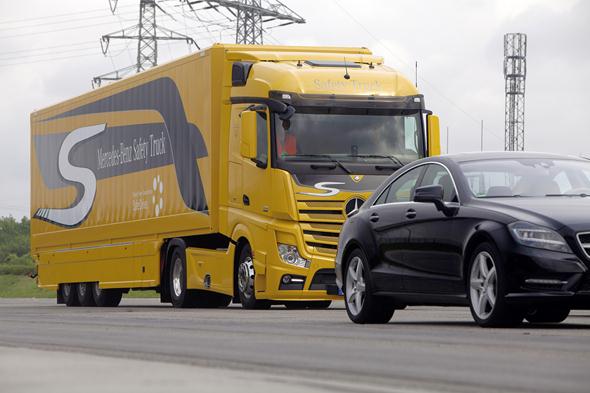 In a first step, it makes mandatory the installation of electronic vehicle stability control systems (EVSC), known as ESP or ESC, in all new vehicles of existing models (passenger cars, buses, trucks and trailers) with effect from 1 November 2014. The positive impact of such systems can already be seen in the market and has been proven in several studies.

The considerable benefits of these systems, for heavy touring coaches and trucks and their trailers in particular, are undisputed. Installation in all new vehicles earlier than proposed in the EU Regulation would therefore be both possible and desirable.

A second step makes Lane Departure Warning Systems (LDWS) and Advanced Emergency Braking Systems (AEBS) mandatory for all new commercial vehicles. This relates to new type approvals granted from 1 November 2013 for buses with more than 9 seats and trucks with a permissible gross vehicle weight of over 3.5 tonnes, and to all newly registered vehicles with effect from 1 November 2015.

The adaptive cruise control and emergency braking systems that are currently available on the market are able to recognise and react to moving targets, in other words to vehicles driving or slowing down ahead. 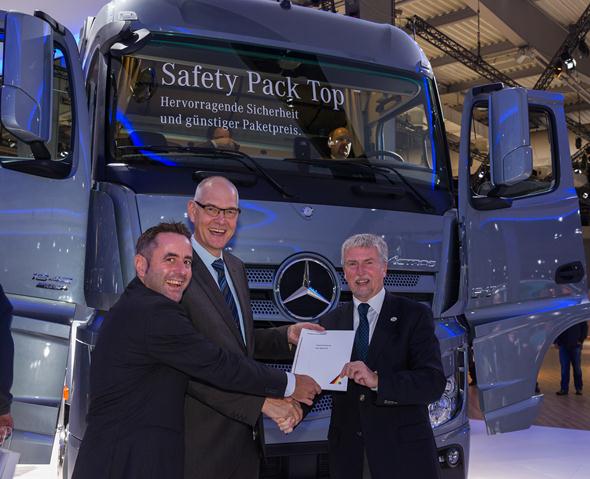 The IAA 2012 saw the introduction of the Mercedes-Benz ABA 3 system, which is now also effective in situations involving stationary obstacles such as construction site safety vehicles or vehicles that have broken down, and to take the initiative to brake the vehicle to a standstill and so completely prevent a rear-end collision.

Such systems have a significant part to play in reducing accidents in the way that they help inattentive drivers to recognise critical situations and are able to reduce kinetic energy through autonomous braking.

Special exhibition at the Mercedes-Benz Museum