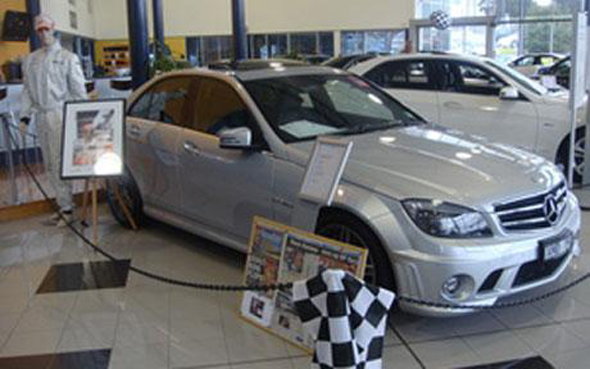 Lewis Hamilton’s luxury Mercedes sports car that was impounded by police after his recent reckless driving incident in Australia will this week go under the hammer for charity.

Bidding for the 25 year-old’s luxurious silver AMG C63 sports car, with just 343 miles (566km) on the clock, is currently sitting at more than $150,000 (£90,000). It retails in Britain for almost £52,000. The Melbourne-based Mercedes dealershipconducting the auction said it expected winning amount to be even higher amid frenetic last minute bidding before Thursday’s deadline. Hamilton, who earns around £20 million a year, was last month stopped by police just yards from the Australian Grand Prix track and interviewed for more than 30 minutes over claims he had been recklessly driving.

His car was later impounded after officers caught him deliberately swerving his vehicle across the streets of southeast Melbourne, in what is dubbed “hoon driving” by Australian authorities. The McLaren driver later issued a statement apologising for the “silly” incident and the “over-exuberant manner” while droving through the suburbs of St Kilda. Tim Pallas, the local roads minister, later lashed out at Hamilton’s behaviour, calling him a d——- when criticising his conduct. Colin Uden, the Mercedes dealer principal behind online auction, described it as a “beautiful car”.

“The car comes with the police report, which records the ‘hooning’ incident,” Mr Uden said on Wednesday. “There is also the valet parking ticket from the Hilton hotel with Lewis Hamilton’s room number and the car’s registration number on it. “And there is an F1 personnel sticker on the windscreen.” Police said officers witnessed Hamilton “accelerating heavily” through the streets just on the outskirts of the Albert Park racing track but was not arrested or taken to a police station.

Witnesses reported he had generated clouds of smoke by spinning the wheels of his high-powered car and slewing the back wheels across the tarmac, manoeuvres known as a “burnout” and “fishtailing”. Despite the incident, Mr Uden said the car, and its tyres, were in immaculate condition. “He just did a couple of burnouts,” he said. “He did not wreck the tyres. It was registered in January and it has only done 566km. “It is a beautiful car.”

The auction closes at 11am on Thursday Melbourne time. Money raised will be donated to an Australian charity which supports young people with cancer.

Bids are being taken via email at [email protected]