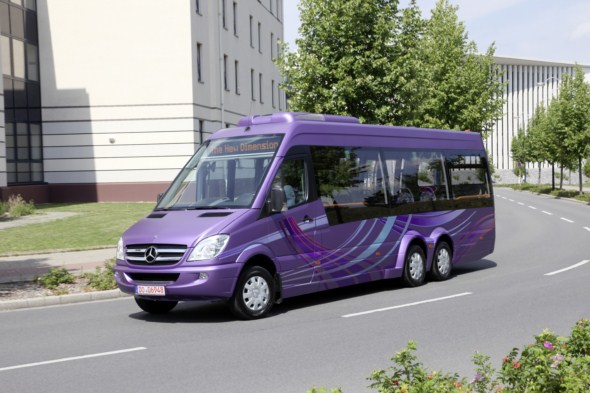 Stuttgart/Hanover – The new developments for Mercedes-Benz buses and coaches will focus on enhancing environmental friendliness, efficiency, and passenger safety. Five travel coaches and transit buses will be presented at the 63rd IAA in Hall 14/15. Among them will be the innovative, zero-emission Citaro FuelCELL Hybrid. The Mercedes-Benz Sprinter City 77 for urban use will be making its debut at the auto show. 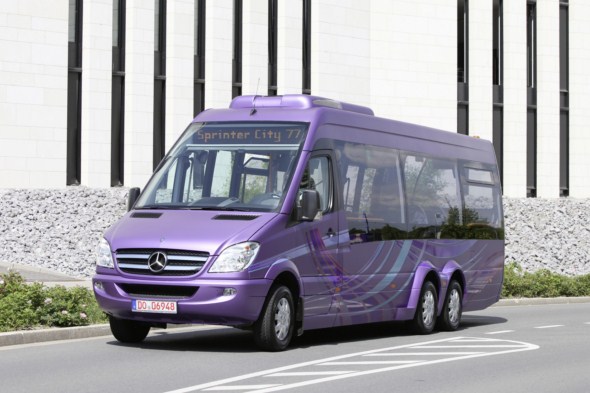 This minibus is XXL: Mercedes-Benz caps its urban minibus range with the new Sprinter City 77. The three-axle 8.7-metre-long urban bus is based on a conventional Sprinter up to the B-pillar. The bus body with twin rear axle and continuous low-floor area is an exclusive in-house development for the Sprinter City 77. Thanks to its capacity of 40 passengers it plugs the gap between the Sprinter City 65 and the Citaro K. The new Sprinter City 77 is around a metre longer than the previous City 65 flagship model and – depending on the equipment options – boasts ten extra passenger seats. The gross vehicle weight of 6.8 t facilitates the high passenger-handling capacity. 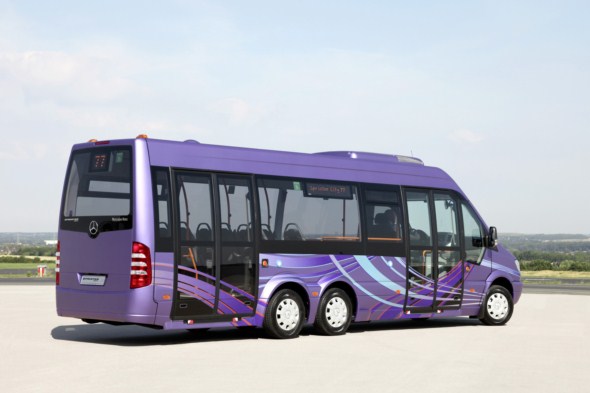 Two outward-swinging double doors, which are operated using an innovative drive concept, and a kneeling function along with the stepless low floor throughout ensure fast passenger flow and convenient boarding and alighting. Depending on the configuration a wheelchair bay with a ramp is available at the front or rear. The bright interior with its large windows and large glass doors is spacious and attractive.

The Sprinter City 77 has a wheelbase of 4100 + 990 mm. The air-sprung rear axles feature 235/65 R 16 C single tyres all-round. The relatively short wheelbase and the sleek design make the minibus extremely manoeuvrable: the width of the separately mounted body is just 1.99 metres, making the largest member of the Mercedes-Benz minibus line-up likewise ideally suited to tight inner city areas. Moreover, it is also an ideal solution as a shuttle bus for airports or trade fairs, as well as for rural services.

A Mercedes-Benz Sprinter with the most powerful version of the four-cylinder diesel engine provides the platform. Its output of 120 kW (163 hp) and maximum torque of 360 Nm delivers appropriate performance. The Sprinter City 77 is among the cleanest on the block with its EEV emissions standard certification. Power transfer comes courtesy of a convenient fully automatic 5-speed transmission as standard.