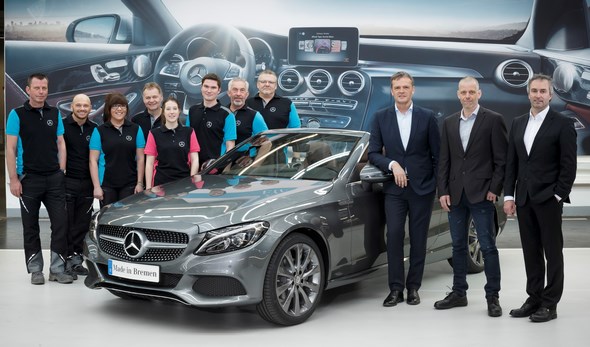 Bremen – The first C-Class Cabriolet has rolled off the production line at the Mercedes-Benz plant in Bremen.

This is the first Cabriolet in the history of the C-Class and the fourth model of this product family which is being built at the Bremen plant, including the AMG versions.

In the year of the dream cars, Mercedes-Benz has already put the new SLC, SL and the new S-Class Cabriolet on the road.

The C-Class Cabriolet will be available for customers from summer 2016, rounding off the range of open-top four-seaters with a classic fabric top.

With its fascinating design, the dynamic chassis with optional air suspension, 9G-TRONIC automatic transmission and efficient engines, this dream car offers open-air enjoyment all year round.

“The new C-Class Cabriolet is a fascinating vehicle with emotional appeal. The start of production in Bremen is symbolic of the growth strategy pursued by Mercedes-Benz Cars.

Our aim is to offer the right vehicle to every customer,” states Markus Schäfer, Member of the Divisional Board Mercedes-Benz Cars, Production and Supply Chain Management.

“With the new C-Class Cabriolet, four models of one product family are being produced flexibly, efficiently and in top quality at the Bremen plant – a great reference for the site and the workforce.”

Expansion of the production portfolio
The launch of the C-Class Cabriolet increases the Bremen plant’s portfolio to nine vehicles, which requires a particularly high level of flexibility in production.

“We in Bremen are handling a highly diverse production programme and once again proved our competence in the area of production starts,” says Peter Theurer, Head of the Mercedes-Benz Bremen plant.

“The team made enormous efforts bringing the C-Class Cabriolet off to a successful start and is already set for the launch of the GLC Coupé.

Our production portfolio has never been more diverse, up-to-date and competitive.”

Michael Peters, Chairman of the Works Council at the Mercedes-Benz plant in Bremen, adds: “We’re proud to build such a fantastic car as the C-Class Cabriolet.

The scope of production covering ten models in Bremen as of this summer is unprecedented and a strong proof of the capabilities of our highly qualified Bremen team.

We have shown that we are able to cope with this degree of complexity in recent years. The numerous production starts mean long-term job security at the Bremen plant, allowing the colleagues to face the future with confidence.”

Production requirements
Just like the Coupé, the C-Class Cabriolet features an intelligent lightweight construction with a high proportion of aluminium.

Lightweight components include the wings, bonnet and boot lid, lowering the weight of the vehicle and its CO2 emissions.

Accordingly, a diverse range of innovative joining technologies is applied in the body shop.

The increasing trend towards customised vehicle manufacturing is demonstrated in the assembly of the C-Class Cabriolet by the fully automatic fabric soft top.

Apart from the basic variant in black, it is also available with a multi-layer acoustic soft top in dark brown, dark blue, dark red or black.

Numerous other equipment variants as well as safety and assistance systems mean that every vehicle running off the production line in Bremen is unique.

In 2015, the plant was rewarded as “Factory of the Year” in the category large-scale production. As lead plant of the C-Class, Bremen directs the worldwide production of the highest-volume model series in the plants abroad in Tuscaloosa/USA, Beijing/China and East London/South Africa.

The assembly of the new GLC is also directed by Bremen as the main production site.