All-wheel drive for all 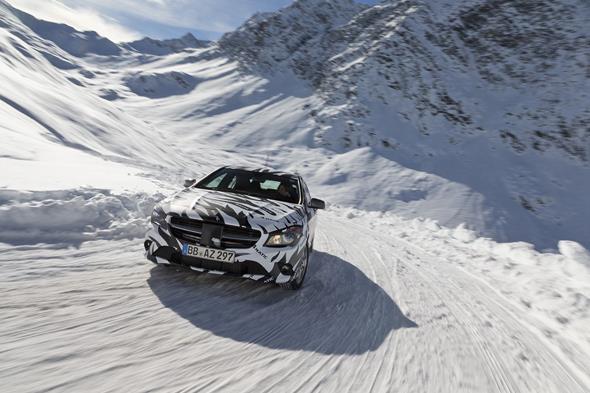 Stuttgart.  From next year, Mercedes-Benz will be offering a new variant of the 4MATIC permanent all-wheel-drive system with fully variable torque distribution. This new development is based on the front-wheel-drive architecture with transversely mounted engines.

Like the other 4MATIC versions, it boasts high tractive power reserves and outstanding agility accompanied by optimum driving safety and energy efficiency. The new 4MATIC will complement the four all-wheel-drive versions which have been available to date.

This will ensure 4×4 technology tailored to the respective vehicle categories – from the CLA and the models of the C-, E-, S-, CLS- and CL-Class to the comprehensive range of SUVs and ATVs covering the GLK-, M-, GL-Class and G-Class.

The new 4MATIC will also boost driving enjoyment in the particularly dynamic CLA 45 AMG which, like the series production model, is to be premiered in 2013.

The most innovative components of the new 4MATIC include the power take-off to the rear axle which is integrated in the 7G-DCT automated dual clutch transmission and the rear-axle gear with integrated, electrohydraulically controlled multi-disk clutch.

This set-up enables fully variable distribution of the drive torque between front and rear axle. Additional benefits of this design are a lower system weight than is available from the competition and high efficiency. Similarly to the front-wheel-drive versions, all 4MATIC models also boast good energy efficiency. 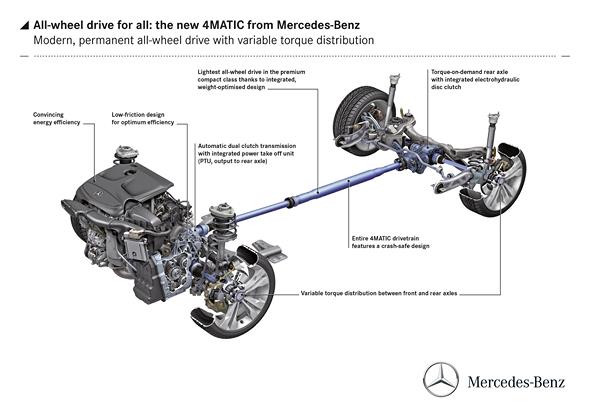 The 4MATIC all-wheel drive is a completely new development tailored to the requirements of the new models with front-wheel drive.

The new 4MATIC comes together with the 7G-DCT seven-speed automated dual clutch transmission. The power flux to the rear powertrain is provided by a compact power take-off unit (PTU) which is fully integrated in the main transmission and is supplied with lubricant from the latter’s oil circuit.

This configuration gives rise to substantial weight advantages of up to 25 percent in comparison to rival systems which branch off power by means of an add-on component with its own oil circuit. Together with the friction-minimised tapered roller bearings, the PTU achieves an excellent level of efficiency.

The electrohydraulically actuated multi-disk clutch integrated in the rear-axle gear unit provides for fully variable torque distribution. Basic principle: when the multi-disk clutch is open, the vehicle is driven almost exclusively by the front axle.

When the clutch is closed, the rear axle comes into play. The drive torque can be shifted in fully variable mode between front and rear axle according to the given situation (torque on demand).

The system pressure to activate the rear axle is supplied in milliseconds by the rotor pump which is integrated in the rear-axle gear unit. The pump is activated automatically as soon as only minimal speed differences apply between front and rear axle. Pressure control is performed by an ESP®-controlled proportioning valve.

The 4MATIC is activated according to the basic principle of “as often as necessary, as rarely as possible”. This means that when the underlying conditions allow, the all-wheel-drive models run almost exclusively in particularly economical front-wheel-drive mode.

As soon as the driving situation requires, drive torque is channelled to the rear axle as appropriate. The reverse process takes place just as quickly: as soon as additional drive torque is no longer necessary at the rear axle – e.g. in case of heavy braking manoeuvres with ABS intervention – the rear powertrain is deactivated and torque is reduced to zero.

In case of impending understeering or oversteering under load, the drive torque is first of all distributed such as to stabilise the vehicle. Only if these measures fail to have a stabilising effect do the control systems adapted to 4MATIC conditions, such as ESP® or 4ETS, intervene to keep the vehicle stable.

With this strategy, the developers have managed to combine two key requirements defined in the performance specifications: optimum energy efficiency coupled with maximum driving dynamics and driving safety.

The torque distribution ratio is also dependent on the activated shift programme of the 7G-DCT dual clutch transmission. In ECO mode less torque is channelled to the rear axle, resulting in gentler handling and supporting an economical driving style at lower revs.

In SPORT or MANUAL mode the activation times are shortened and more torque is distributed to the rear axle in the interests of a dynamic, sporty driving style. On the AMG versions, adaptation of the 4MATIC controller takes place in accordance with the 3-stage ESP®.

The CLA-Class models which are set to appear next year and the particularly agile and powerful CLA 45 AMG will also benefit from the further advances in all-wheel-drive technology from Mercedes-Benz. The new Mercedes-Benz CLA adopts the avant-garde design of the Concept Style Coupé into series production almost 1:1.

In keeping with its sporty positioning, the CLA is available with high-torque turbo engines rated at up to 155 kW (211 hp), sports suspension and the newly developed 4MATIC. The technical highlights include numerous driving assistance systems, such as advanced COLLISION PREVENTION ASSIST.

CLA 45 AMG: the most dynamic way to experience the new 4MATIC

As the high-powered top model of the new compact class, the CLA 45 AMG broadens the portfolio of Mercedes-Benz’s high-performance brand to offer a fascinating high-performance vehicle in this class, too. 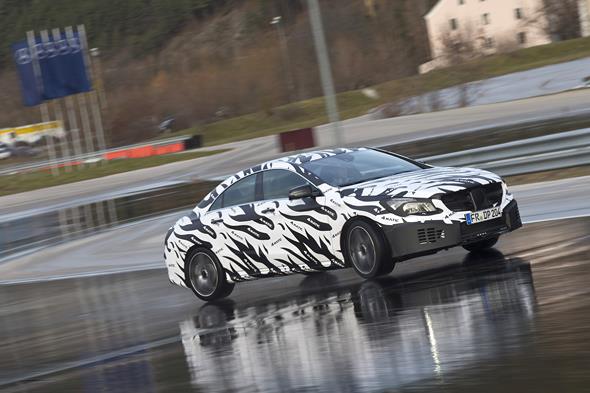 In conjunction with the specially adapted 4MATIC version for this engine-power class, the CLA 45 AMG will be one of the most dynamic, powerful and efficient four-cylinder coupés around.

In addition to the E-Class and the C-Class, both of which are available as Saloon and Estate variants, the 4MATIC model range also extends to the CL luxury coupé, the four-door CLS Coupé and the CLS Shooting Brake.

The recently thoroughly overhauled SUVs and ATVs are also included in the range – the M‑Class, the compact GLK, the GL luxury SUV and the legendary G-Class, which still retains its special off-road strengths after 33 years in production.

The all-wheel-drive line-up from Mercedes-Benz further includes an exotic model in the guise of the SLS AMG Electric Drive. Four electric motors on this vehicle guarantee tremendous thrust, with fully variable and selective drive torque distribution to the individual wheels.

And when the compact models featuring the new 4MATIC generation round off the range next year, it will really be a case of all-wheel drive all-round!