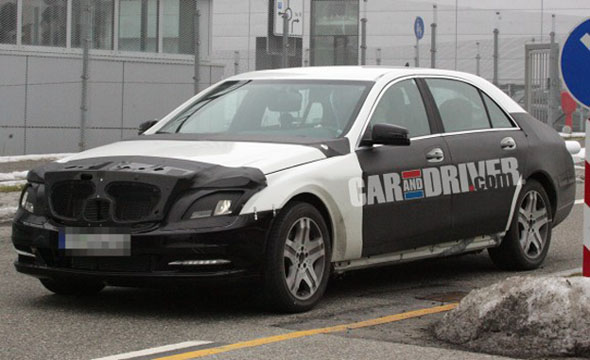 Mercedes passenger-car development boss Thomas Weber believes not only that fuel cells—marketed as range-extending hybrids—have a viable future, but that they will be just one part of a complicated mix of drivetrains. Here’s what he had to say at the Geneva show about other future powertrains.

“We are looking at plug-in hybrids. Three years ago, everyone thought that there would only be small cars and that there would be no more large cars. But our plug-in concept demonstrated that an S-class could make 78 mpg, so those questions stopped. With the next generation of S-class we are talking 81 mpg [based on the European hybrid cycle] (Thats 2.90 l/100km WOW!), using a new-generation 3.0-liter V-6 gasoline engine—direct injection and piezo injectors—integrated with a 60-hp electric motor. In pure-electric mode, the car would have a range of just over 20 miles at speeds of up to 68 mph. It is clear that we will have a plug-in hybrid in the next-generation S-class.

“We think you can have different types of vehicles. We have looked at an electric SLS because people don’t use an SLS for long-distance driving. They use it on the weekend for fun. And we think a range of 125 miles is fine for this type of car. It’s a start of a discussion of what the future of the sports car looks like. Hybridization doesn’t work because it adds additional weight and we don’t feel that’s right for a sports car. If we have to add weight, then using powerful alternative drivetrains makes sense: with 590 pound-feet of torque from four wheel electric motors, driving the SLS is a sensational feeling, one without noise. We should continue with such ideas.

“We cannot think only in terms of electric cars because the biggest hurdle is the batteries. The energy density is ten times worse than diesel or gasoline and so far I don’t see we have reached the level of efficiency we have on the combustion side. And charging time is a limitation on the battery side, too. The batteries tend to overheat if you charge them too fast, they are expensive and really, really heavy. It will be the perfect solution for the inner cities, but not for long distances or for customers who have just one car. We will focus a lot of effort on developing affordable vehicles with batteries, but plug-ins for the larger cars and fuel cells as range extenders.”