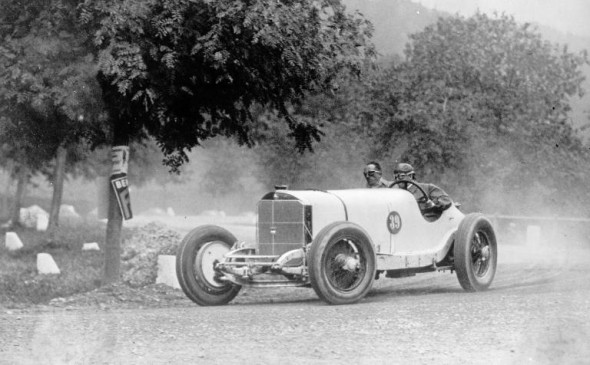 1928: Compact sports model among the “White Elephants” – the SSK
By the later 1920s there were close links between motor racing and exclusive vehicles built for customers. In the family of K, S, SS, SSK and SSKL supercharged sports cars, the SSK model, introduced in 1928, represented the most advanced development stage of any vehicle that could also be purchased by customers. The Super Sport Kurz (kurz = “short”) had a wheelbase shortened to 2950 millimetres and was powered by a mechanically supercharged 7.1-litre in-line six-cylinder engine, which developed an output of up to 184 kW (250 hp).
The legendary Rudolf Caracciola won numerous races at the wheel of this car. At the same time, from October 1928 onwards the SSK was built in a small series for customers, who saw it both as a fast sports car for everyday use and as a race vehicle for competitive use. 33 vehicles were produced in total between 1928 and 1932. 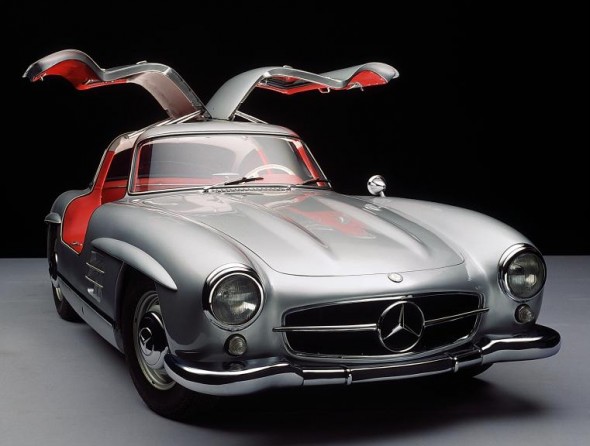 1954: 300 SL – the birth of an icon from the spirit of motor racing
The Mercedes-Benz 300 SL of 1954 (W 198 I) borrowed many technical features from the W 194 racing sports car of 1952. These included, in particular, the extremely lightweight spaceframe and distinctive gullwing doors.
Instead of the in-line six-cylinder M 194 carburettor engine with a displacement of 3 litres and an output of 129 kW (170 hp), however, the series sports car was equipped with the 158 kW (215 hp) M 198 I engine with mechanically-controlled direct fuel injection. Design of this dream car of the 1950s was also refined significantly compared with the much more basic looking racing sports model.
It also went on to continue the motorsport tradition of its namesake – one of these 300 SL series sports cars, for example, took the class victory at the 1955 Mille Miglia.
Between August 1954 and May 1957 a total of 1400 units of the 300 SL “Gullwing” were built at Sindelfingen. Of these, 29 had a light alloy body and one prototype was fitted with a plastic body. 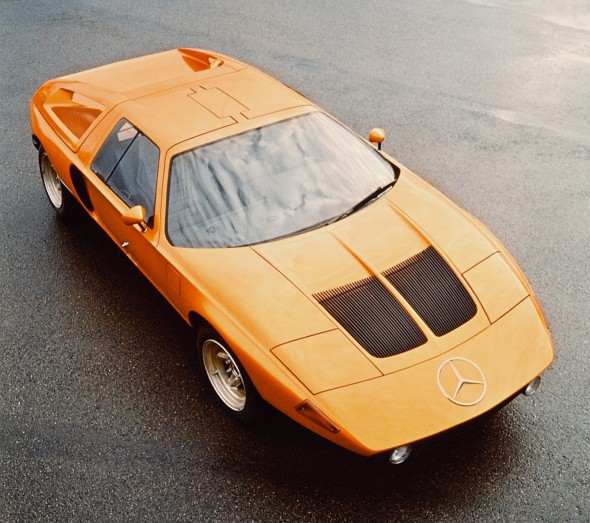 1969: An idea that aroused passion – the C 111
At the1969 International Motor Show (IAA) in Frankfurt am Main, Mercedes-Benz unveiled an idea of what the next generation of super sports cars with a three-pointed star on the bonnet might look like. The C 111 experimental vehicle was a dynamic wedge shape with gullwing doors, powered by a futuristic-looking rotary piston engine based on the Wankel principle.
In particular the advance development version of this car, the C 111-II, which was presented at the Geneva Motor Show in 1970, awakened hopes of series production and fanned the flames of passion of the automotive world. But the super sports car with its 257 kW (350 hp) four-rotor Wankel engine remained a near-series technology test-bed, even though numerous blank cheques were received at Untertürkheim from enthralled and eager customers. Factors that ruled out a production version included the comparative inefficiency of the engine and ever stricter emissions legislation. 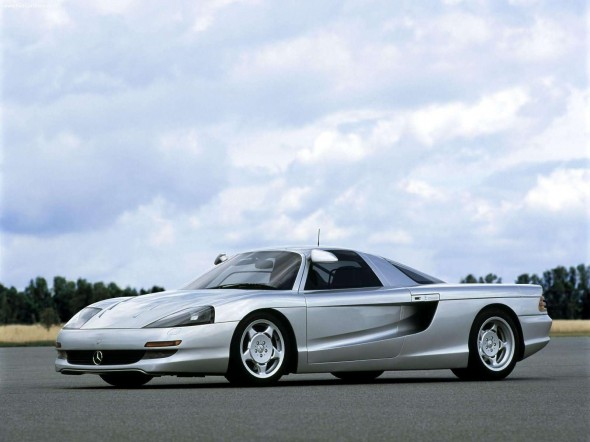 1991: Performance at its best – the C 112
The Mercedes-Benz C 112 of 1991 highlighted many of the same ideas as the C 111. This breathtaking sports car study boasted a 6-litre 12-cylinder engine with an output of 300 kW (408 hp). The C 112 anticipated many of the technical innovations for high-performance automobiles that would find their way into series production at Mercedes-Benz in the years ahead – including Active Body Control (ABC), DISTRONIC proximity control and tyre pressure monitoring. The C 112 was influenced by the current Mercedes-Benz racing sports car of the day, the C 11, which raced in Group C for the 1990 season.
Other unusual features of the C 112 included its active aerodynamics. The front spoiler and rear aerofoil were infinitely adjustable and could therefore be adapted to any driving conditions so as to guarantee optimum compromise between low drag and good downforce. The rear spoiler also served to improve emergency braking – if required, it could be raised into the headwind instantaneously. 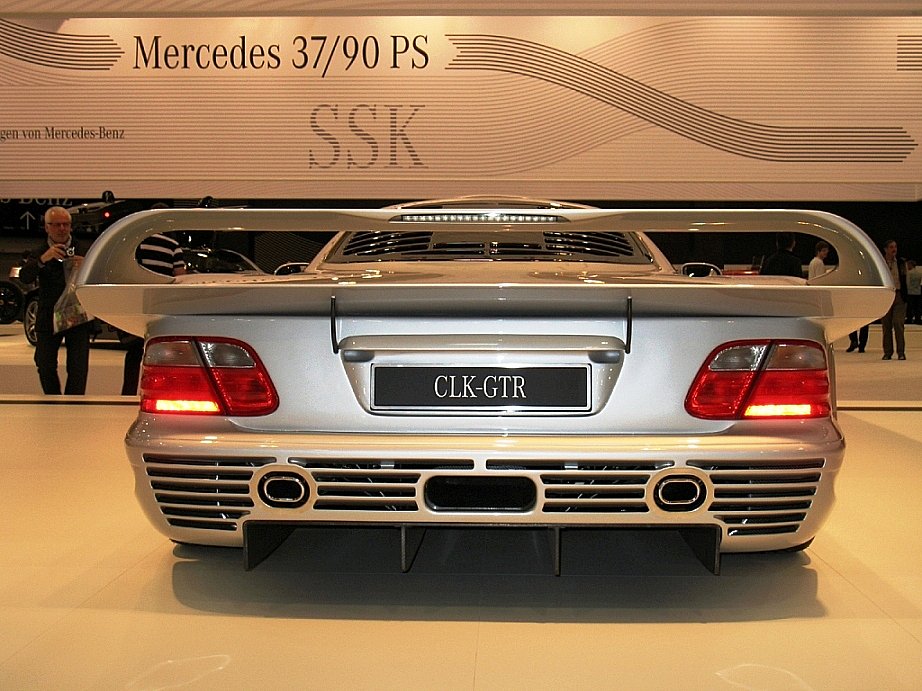 1997: From the heat of the race track – the Mercedes-Benz CLK-GTR
In 1997 Team AMG won the FIA-GT Championship with the racing prototype Mercedes-Benz CLK-GTR. From this competition vehicle AMG derived a road-legal version – the Mercedes-Benz CLK-GTR super sports car. This was presented in April 1997.
The coupé was equipped with a 6.9-litre V12 engine that developed 412 kW (560 hp). One of the innovative details realised by the engineers in this car was a body made of carbon-fibre composite. In contrast to the sports and performance-optimised racing car, the super sports car came with air-conditioning, a hi-fi system and leather appointments.
Nevertheless, the CLK-GTR did not for a moment disown the legacy it had been left by the competition vehicle. The super sports car delivered extreme performance, and the tight cockpit allowed both driver and passenger to experience a racing atmosphere at first hand. This vehicle enabled AMG to underline its expertise in the technology transfer from motor racing to elegant, sporty series production. 25 examples of the CLK-GTR were built in total.

1999: Dynamism and power: the Vision SLR
Unveiled by Mercedes-Benz at the 1999 Auto Show in Detroit, the Vision SLR concept vehicle was the study of a Gran Turismo for the 21st century. It combined stylistic elements of both the Formula One Silver Arrow and the SLR sports car of the 1950s, with which drivers such as Juan Manuel Fangio, Karl Kling and Stirling Moss raced to one victory after another. The Vision SLR did not remain a concept vehicle, however. In 2004 the vehicle went into series production as the Mercedes-Benz SLR McLaren and was built in a number of different variants until 2010.
The chassis of the Vision SLR was made from a combination of composite fibre materials and aluminium. From a displacement of 5.5 litres, the eight-cylinder engine developed 410 kW (557 hp) and ranked as one of most powerful power units in this displacement class. The Vision SLR achieved impressive performance figures: it could accelerate from 0 to 100 km/h in just 4.2 seconds and from 0 to 200 km/h in
11.3 seconds, with a top speed of 320 km/h. 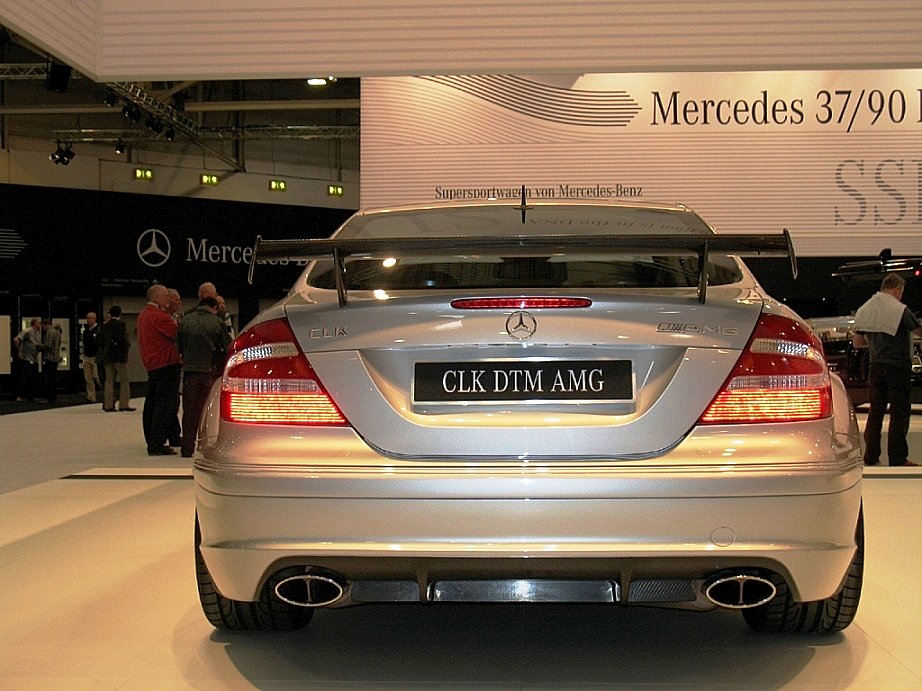 2004: Mercedes-Benz CLK DTM AMG, a masterpiece of racing technology
AMG delivered another piece of thoroughbred racing technology for the road in 2004. The Mercedes-Benz CLK DTM AMG was closely modelled on one of the most successful racing cars of its day, the racing version of the Mercedes-Benz CLK, the car in which Bernd Schneider won the German Touring Masters DTM in 2003.
The series version of the vehicle was powered by an AMG 5.5-litre V8 supercharged engine, delivering an output of 428 kW (582 hp). It also boasted an all-new chassis, optionally available sports tyres and aerodynamics optimised in the wind tunnel. The super sports car covered the sprint from standstill to 100 km/h in just 3.9 seconds, its top speed electronically limited to 320 km/h.
The interior of this exclusive automobile featured two leather-upholstered AMG sports bucket seats with four-point seat belts, steering was via an oval AMG racing steering wheel with suede upholstery, and information was gleaned from the AMG instrument cluster with a speedometer range up to 360 km/h. The Mercedes-Benz CLK DTM AMG was built in a limited edition of 100 units. 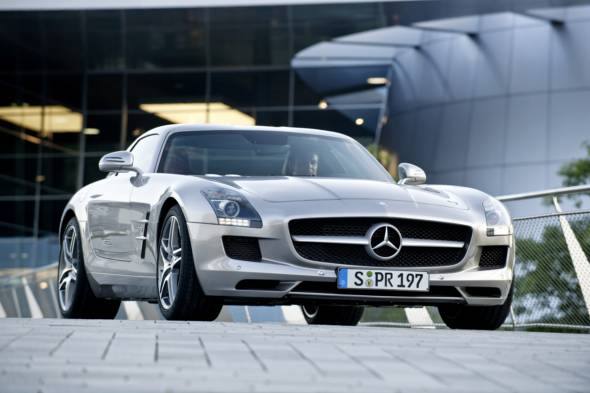 2010: Mercedes-Benz SLS AMG
The story of super sports cars from Mercedes-Benz is the story of extraordinary originals. Each of these vehicles is representative of the most innovating technology of its day, and of the utmost fascination and exclusivity of very small series production and a high degree of handcraftsmanship. The Mercedes-Benz SLS AMG arrived on the scene in 2010 to continue this story.
With its unique technology package, the new super sports car from Mercedes-Benz and AMG is an enthralling sight – and one which guarantees vehicle dynamics of the highest level thanks to a combination of aluminium spaceframe body and gullwing doors, an AMG 6.3-litre V8 front-mid-engine developing 420 kW (571 hp), 650 Nm of torque and dry sump lubrication, a 7-speed double-declutch transmission in a transaxle arrangement, sports suspension with aluminium double wishbones and a kerb weight of 1620 kilograms. The ideal weight distribution of 47 percent to 53 percent between front and rear axle and the vehicle’s lower centre of gravity add emphasis to the distinctive sports car concept. The Gullwing accelerates from 0 to 100 km/h in 3.8 seconds; it has a top speed (electronically limited) of 317 km/h.
Tags
2010 techno classica

Up to 26 hp and 40 Nm More for the Mercedes CGI BlueEFFICIENCY Models: The BRABUS ECO PowerXtra CGI Performance Kit