Unique in design, dimensions and dynamism: The new R-Class, the Grand Sports Tourer from Mercedes-Benz 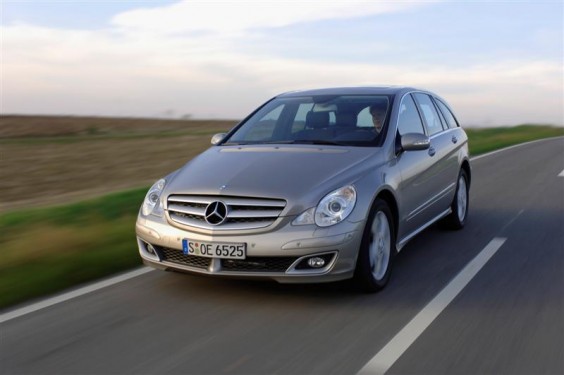 The new R-Class, the Grand Sports Tourer from Mercedes-Benz, reaffirms the role of Mercedes-Benz as the visionary and trendsetter amongst automotive brands. The unprecedented vehicle concept takes the acknowledged strengths of established vehicle categories, such as sporty saloon, estate, MPV and SUV, and fuses them to create a new car with a character all of its own, a car that is all about the three Ds: Design, Dimensions and Dynamism. The model range in the new R-Class has two body variants: the Grand Sports Tourer with a wheelbase of 2980 millimetres was developed specifically for Europe and other markets. The longer version, predominantly aimed at the US market but which is also available for European customers, has a wheelbase of 3215 millimetres. There is a choice of three engines with six and eight cylinders, including the latest V6 diesel unit with a muscular 510 newton metres of torque and a fuel consumption of 9.3 litres per 100/km.
The concept of the Grand Sports Tourer caters to the needs of modern-minded people looking for a car that offers tremendous versatility combined with athletic performance. Quite apart from boasting ample spaciousness, exemplary standards of safety and impeccable comfort for up to six passengers, the new R-Class also enthrals with its beguiling styling, prestigious flair and, last but by no means least, its dynamism out on the road. To put it in a nutshell: the Grand Sports Tourer provides a wholly new motoring experience.

The design provides a visual expression of the poised, assured and dynamic character of the new R-Class. The front end is dominated by a striking radiator grille whose long, horizontal louvres symbolise strength and energy – attributes which characterise more than just the shape of the Grand Sports Tourer. The arching roof line provides a sweeping link between the A-pillar and D-pillar and lends the car a sleek, coupe-like silhouette.

Measuring 4922 or 5157 millimetres from nose to tail, the body of the new Mercedes-Benz R-Class has the dimensions of a luxury saloon but is considerably more spacious inside. This is due primarily to the sophisticated vehicle concept and a dimensional design that has been ingeniously planned right down to the finest detail. Up to six passengers can be accommodated in three seat rows in the R-Class � each of them with a window seat. Anybody settling down in one of the individual seats will soon notice another characteristic of the R-Class: space travel on wheels.

The seat spacing, an important criterion when it comes to freedom of movement and spatial comfort, amounts to 860 or 920 millimetres between the first and second rows, equivalent to the level found in luxury saloons. The kneeroom is 119 and 175 millimetres. Likewise, the figures for headroom (rear: up to 1027 millimetres) and shoulder room (front 1530 millimetres, rear up to 1514 millimetres) take the levels of space and comfort aboard the Mercedes-Benz R-Class into a new dimension. 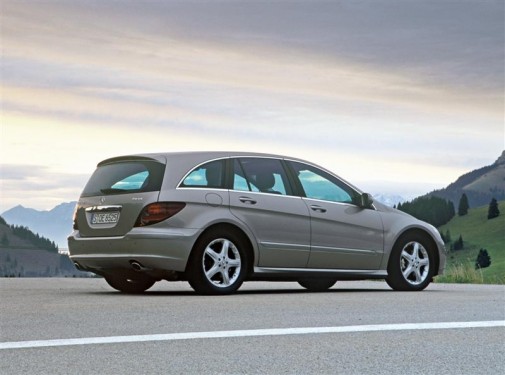 Families who are keen on sports and recreational activities and who are looking for a versatile car that can adapt to all manner of transportation tasks quickly and easily are also catered for by the new R-Class as only Mercedes knows how. The four seats in the rear fold flat individually, allowing the load capacity to be expanded to as much as 1950 or 2385 litres (VDA measuring method). Loading and unloading is particularly straightforward, courtesy of the level load floor and the generously proportioned EASY-PACK tailgate.

Engine outputs range from 165 kW/224 hp up to 225 kW/306 hp, clearly signalling just what the new R-Class is capable of in terms of dynamism and motoring enjoyment. The powerful V8 powerplant under the bonnet of the R 500 propels it from standstill to 100 km/h in just 6.9 or 7.0 seconds and on to a top speed of 245 km/h. Also to be found in the engine line-up is a new six-cylinder diesel power unit with third-generation common-rail, direct-injection technology, whose credentials include improved fuel consumption, even lower exhaust emissions and an audible improvement in refinement. The V6 engine places its class-beating peak torque of 510 newton metres on tap from as low down as 1600 rpm.

All engine models are partnered as standard by the 7G-TRONIC seven-speed automatic transmission, which itself comes with a noteworthy new feature in the form of DIRECT SELECT. This electronic transmission control system has allowed Mercedes engineers to dispense with the conventional automatic selector lever in the centre console and to replace it instead with a lever on the steering column. Additional gearshift buttons on the steering wheel enable drivers to manually pre-select the seven forward gears, just as in a Formula One racing car.

Permanent all-wheel drive, the electronically controlled 4ETS traction system and ESP team up to offer top-notch driving safety and keep the new R-Class safely on course, even in very bad road conditions. These systems all make up part of the vehicle’s standard specification, as does air suspension for the rear wheels. Mercedes customers also have the option of AIRMATIC all-round air suspension with the Adaptive Damping System ADS, which automatically lowers the suspension by 20 millimetres at high speeds to reduce wind resistance.

The latest technology offers passengers in the Grand Sports Tourer the safety to be expected of a Mercedes. PRE-SAFE, the multi-award-winning anticipatory protection system which is available as an option, detects critical handling situations and immediately springs into action to prepare occupants and vehicle alike for an imminent collision. Precautions include pulling the driver’s and front passenger’s seat belts taut, adjusting the electrically adjustable front passenger seat with memory function to the optimum position and automatically closing the sliding sunroof. These preventive protection measures improve the seating position of the vehicle’s occupants prior to impact, thereby enhancing the restraining effect of the seat belts and airbags.

Adaptive front airbags and front sidebags as well as windowbags can all be found on the standard specification list of the new R-Class, and all passengers enjoy the added reassurance of belt tensioners and belt force limiters. A further Mercedes first for improving standards of occupant safety still further is NECK-PRO crash-responsive head restraints (optional).

The specially developed panoramic sunroof (optional), whose glass panels extend over virtually the entire surface of the roof, ensures a cooling supply of fresh air for the interior whilst letting in a pleasant amount of extra light, which all adds up to a matchless open-air motoring sensation for the occupants. The efficient air conditioning system makes long journeys aboard the new R-Class all the more comfortable. In addition to the standard-specification THERMATIC dual-zone climate control featuring a separate control panel for the rear, Mercedes-Benz is also able to offer a newly developed multi-zone THERMOTRONIC system as an option. Equipped with over a dozen sensors as well as an auxiliary booster blower, the system is able to faithfully maintain the temperatures set by the driver, the front passenger and the occupants in the rear.

A CD radio with eight loudspeakers, light-alloy wheels, speed-dependent power steering and front seats which are electrically adjustable for height, cushion angle and backrest angle are also included in the list of standard equipment. Mercedes-Benz offers a number of packages comprising quality extras for the new R-Class.

This allows customers to appoint and upgrade their Grand Sports Tourer to suit their personal taste. In addition to the AIRMATIC package, options include a styling package for the exterior and a sports package.