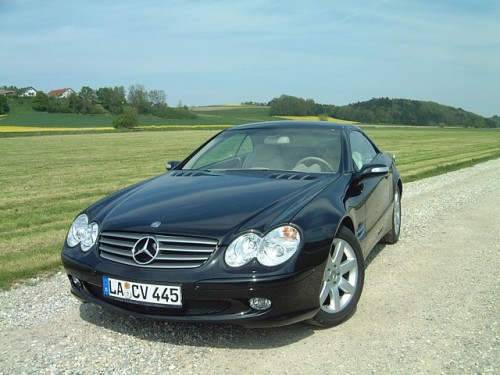 The exterior color was Anthrazit black and the interior made use of lighter cream-type colors. Overall, a nice combination though I would prefer silver or white or red as an exterior color. Loved the interior color combination however. There’s lot’s of space in the SL cabin unlike my dad’s R129 500SL which is cramped. It’s basically the same deal as the SL500, just the engine under the hood is different. Interior materials were fairly good but the SL has gotten perhaps a little outdated on the inside material wise. I am sure the facelift will address that issue.

I started the 3.7-l V6 engine. Surprisingly, it comes to life with a nice growl absent from our E320 (remember, same engine just bored out) and quickly becomes silent. I could already tell the engine was literally the same as our E320’s from the way it behaved now and later during the drive. The moment I put the transmission into “D” and step lightly on the accelerator, the car quickly jumps forward. Whoa…either the engine is pretty responsive or the accelerator is! Either way, I take this baby out of the dealer lot and proceed to cruise around for a while to warm up the 245-horses under the hood. 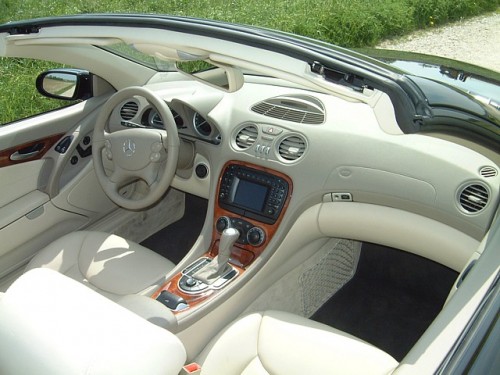 First impressions. The steering was unusually light and gave the impression that it was vague, yet it responded quickly to driver input and made the big SL handle pretty nicely. I had no trouble taking the car around the “racetrack style” country roads here where handling is a necessity if you drive especially sporty and fast. Handling felt safe and secure at all times. There was a little body roll but it didn’t bother me much. I actually felt the heavy weight of the SL is a plus for keeping the car onroad. The suspension was a fusion between softness and stiffness, more the former. It was easy to tell that the suspension was tuned for comfort, it still did a good job of providing the basics and so much more for sporty driving. At the end of the day however, this changes nothing from the fact that all SL’s are cruisers at heart. SL350 up to SL65 AMG, they’re all biased towards relaxed driving IMO. I can summarize the suspension, handling and steering qualities all in one word: smooth.

By now, the SL350 was properly warmed up and I was ready to test her. I let the car roll out to around 30 km/h on a straight road, then proceed to mash the pedal. The engine response was quite quick but it wasn’t brutal. The speedometer flew progressively upwards at respectable speed: not a fast car, but quick. Torque was enough to push you into the seats, but again, nothing brutal. What I liked about the engine was the newfound character: it sounded aggressive and sporty with a tenacious roar that it emitted everytime you floored it. Midrange power was very good and the SL350 pulled stronger here than initial 0-60 acceleration. I noticed that in city driving, the SL350 was a little “slow” from 0-50 km/h when you did nothing but push the pedal, but after that, acceleration was more lively and it performed well even after 120 km/h (75 mph). I took the car on the local B12 Bundestrasse where you can drive a maximum of 62 mph (100 km/h) so I had some fun with the SL350 there. It really isn’t a slouch or as slow as it looks on paper.

I took the car into town topless (roof down). It was a nice and sunny day so all the local Mhldorf chicks were out in the cafes etc. Perfect opportunity to grab some attention. It felt so nice driving this SL through the Stadtplatz at the speed limit of 20 km/h knowing all these girls are staring at either you or the car! Man, they must have thought I was a pimp starting out! I picked up my dad and let him have a go and he was really impressed with the car commenting that the power wasn’t bad at all.

Here’s the bad news: the price tag on this fairly well equipped SL350 was  89,900! I could pay less and get an SL500 for that money! The SL350 proved to me that it’s a pretty fun and fast car. You don’t need an SL500 if cruising is your thing. Personally however, I believe that a V8 is standard in this class and would therefore go for the SL500. But I’d be more than happy with the SL350 as it is a pretty fun car in its own way and isn’t exactly slow. I enjoyed the testdrive a lot. The SL350, like the SL500, was smooth and fun. This may sound silly, but the SL500 was the most fun car I have ever driven: in 2nd place, I’ll put the SL350. There’s just something about the way an R230 SL drives that makes it so fun IMO. Hope you liked my review!

The Grand Sports Tourer from Mercedes-Benz